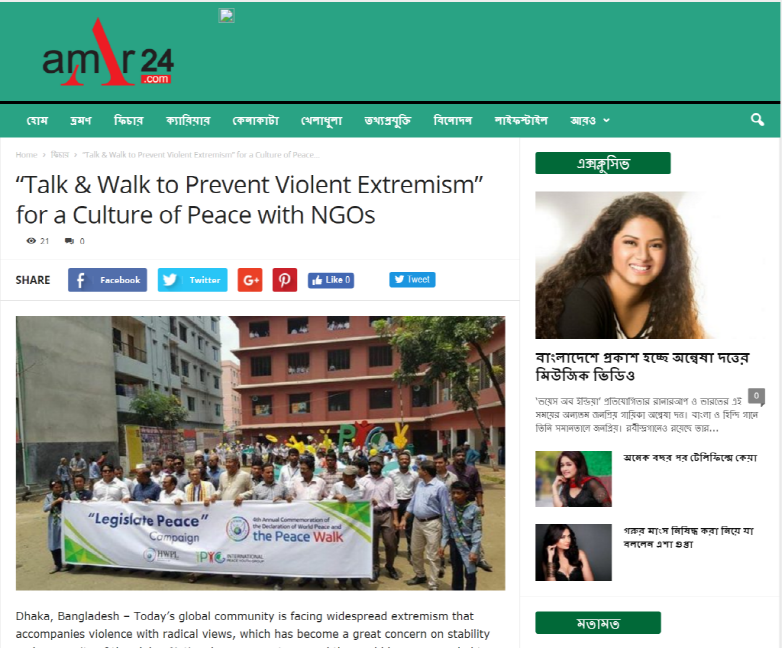 Dhaka, Bangladesh – Today’s global community is facing widespread extremism that accompanies violence with radical views, which has become a great concern on stability and prosperity of the globe. National governments around the world have responded to the contemporary issues of extremism by domestic policies and international cooperation on security and education. Along with the national efforts, international NGOs are organizing campaigns to raise public awareness on the need for peace and tolerance and further to prevent violent extremism.

In his congratulatory speech, Chairman Man Hee Lee of HWPL called for global cooperation on peace building, saying, “Who can bring about peace while we stand still? By putting an end to war, a world of peace can be established.” He also stressed the need for civic participation to “make an end to war and establish a world of peace as a legacy for future generations, which is the very task of every one of our global family.”

In the event, through conversations on values and beliefs the participants have, the time for reflection is given to understand how their beliefs are internalized based on the peaceful values and how their actions can follow in accordance with their faiths. Dr. Mahbubur Rahman Mollah, principal of Shamsul Hoque Khan School and College where the Banglaesh peace campaign was hosted with 5,000 students said, “I think the message of peace will reach every door of Bangladesh by this program.

Though the people of Bangladesh are whole heartedly peace loving, this program will strengthen the spirit of peace further in their mind. People will learn to nurture the necessity of peace in their heart. I believe, through this Legislate Peace Campaign, peace will spread and pervade in every nook and corner of Bangladesh. I am sure that joining this program, the students will learn how to maintain peace in their life, and reject war, ravages, savagery, bloodshed and killing.

So, it is a great decision of HWPL & IPYG to hold a campaign of peace in Bangladesh. I express our gratitude for all related with this campaign from the core of my heart. Peace will be available in the life of everybody.”At the end of the event, the participants gathered together for a peace walk for about 3km. Duhyen Kim, Director of IPYG, emphasized, “IPYG has been working with intergovernmental groups, NGOs, and youth associations globally undertaking projects concerning youth development and peace education. The youth of today are awakening, I myself, have witnessed the world as it is, and do not accept this as my reality. We are made for better things, the world can become a better place.”The campaign traces back to 2013 when the Declaration of World Peace drafted by HWPL with a slogan of ‘Leave peace as a legacy to future generations’. In this year, the annual event is expected to be held from May 19th to May 28th.