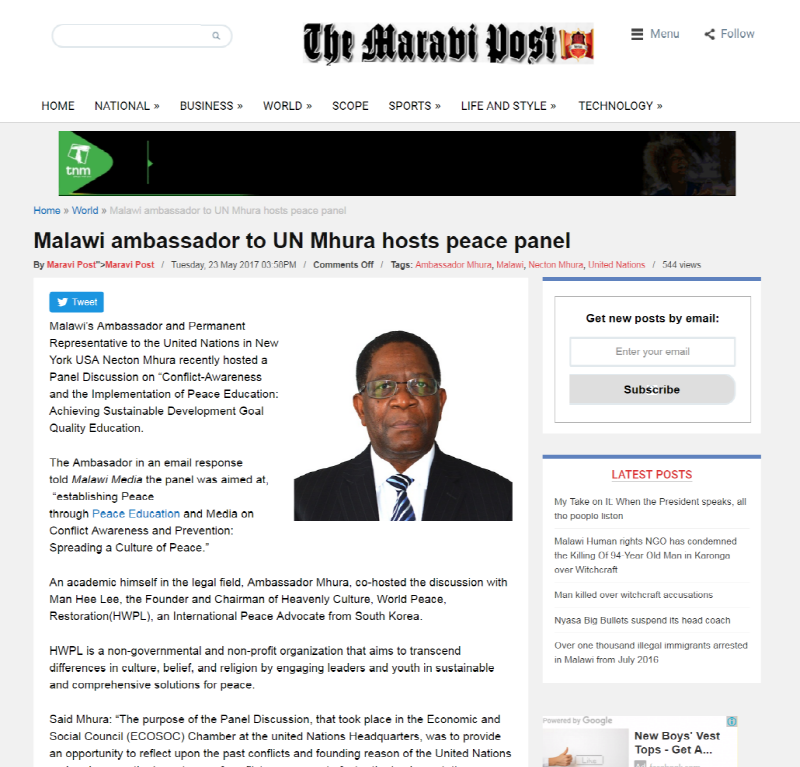 The Ambasador in an email response told Malawi Media the panel was aimed at,  “establishing Peace through Peace Education and Media on Conflict Awareness and Prevention: Spreading a Culture of Peace.”

An academic himself in the legal field, Ambassador Mhura, co-hosted the discussion with Man Hee Lee, the Founder and Chairman of Heavenly Culture, World Peace, Restoration(HWPL), an International Peace Advocate from South Korea.

HWPL is a non-governmental and non-profit organization that aims to transcend differences in culture, belief, and religion by engaging leaders and youth in sustainable and comprehensive solutions for peace.

Said Mhura: “The purpose of the Panel Discussion, that took place in the Economic and Social Council (ECOSOC) Chamber at the united Nations Headquarters, was to provide an opportunity to reflect upon the past conflicts and founding reason of the United Nations and underscore the importance of conflict-awareness to foster the implementation of peace education.”

Mhura further pointed out that peace education is the process of acquiring the values, the knowledge and developing the attitudes, skills, and behaviors to live in harmony with oneself, with others, and with the natural environment.

He cited the fact that Malawi values peace, and this, is demonstrated by her involvement in United Nations Peace-building and Peace-keeping operations since 1994.

Malawi has deployed both the Malawi Defense Force and the Malawi Police Service in faraway countries like, Kosovo, Liberia, Sierra Leone, Cote d Ivoire, Darfur Sudan, and the Demographic Republic of the Congo.

Currently Malawi has a police contingent of over 50 officers in Darfur and a battalion in the DRC.

Mhura further informed the Panel of the National Women in Peace-Building Forum, that was created in October 2016 to champion women’s equal and active participation in peace-building and processes in Malawi by stressing that the Malawi government is committed to promoting women involvement in peace-keeping.

On his part, Man Hee Lee reiterated his call for a world without war. A Korean War Veteran himself, he has a broad understanding of the horrors of war and its devastating effect.

It is for this reason that he was the Lead Co-coordinator of the Proclamation Ceremony of the Declaration of Peace and Cessation of War on March 14, 2016.

Other panelist at the panel discussion were; Willy Louis, a Minister Counsellor, in the Permanent Mission of Haiti to the UN, who spoke on, “The experience of war in Haiti”, Rolando Castro Cordoba, the Charge affairs of the Permanent Mission of Costa Rica to the UN, who spoke on, “Peace for Education and Education for Peace”, Peter Martin Lehmann Nielsen, the Deputy Permanent Representative of Denmark to the UN, he spoke on, “Achievement of Sustainable Development Goal 4: Quality Education. Lot Dzonzi, Malawi’s Deputy Permanent Representative reflected on, “The importance of Youth in Peace Education”.

The event was spiced up with a special performance by the Pierre Van Cortlandt Middle School Choir that sang a Zulu chorus,”Siyahamba” and a John Lennon song, “Imagine”

The panelists therefore agreed with a call to “Spread the Culture of Peace’ all over the world.