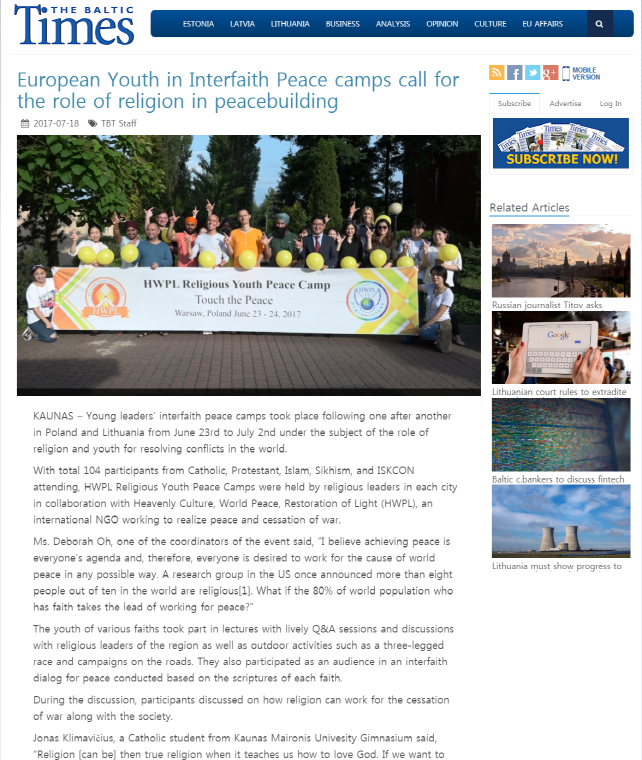 KAUNAS – Young leaders’ interfaith peace camps took place following one after another in Poland and Lithuania from June 23rd to July 2nd under the subject of the role of religion and youth for resolving conflicts in the world.

With total 104 participants from Catholic, Protestant, Islam, Sikhism, and ISKCON attending, HWPL Religious Youth Peace Camps were held by religious leaders in each city in collaboration with Heavenly Culture, World Peace, Restoration of Light (HWPL), an international NGO working to realize peace and cessation of war.

Ms. Deborah Oh, one of the coordinators of the event said, “I believe achieving peace is everyone’s agenda and, therefore, everyone is desired to work for the cause of world peace in any possible way. A research group in the US once announced more than eight people out of ten in the world are religious[1]. What if the 80% of world population who has faith takes the lead of working for peace?”

The youth of various faiths took part in lectures with lively Q&A sessions and discussions with religious leaders of the region as well as outdoor activities such as a three-legged race and campaigns on the roads. They also participated as an audience in an interfaith dialog for peace conducted based on the scriptures of each faith.

During the discussion, participants discussed on how religion can work for the cessation of war along with the society.

Jonas Klimavičius, a Catholic student from Kaunas Maironis Univesity Gimnasium said, “Religion [can be] then true religion when it teaches us how to love God. If we want to love God, we have to love all his creatures. So if we love one each other, we are creating peace. [To do so], talking with different religious people is very important.”

Also, the World Alliance of Religions’ Peace (WARP) Office meeting was held on the second day of the camp in Kaunas at Kaunas Mosque.

The head of Islamic Community of Lithuania, Mufti Romas Jakubauskas remarked, “In every meeting, we are finding more common things than problems. Religious leaders are leaders of their community [and] they have to put more efforts to achieve this goal [peace]. They have to teach their communities, of course, they, themselves have to meet with other religious leaders to find solutions for the biggest problem which is conflicts and wars in the world.”