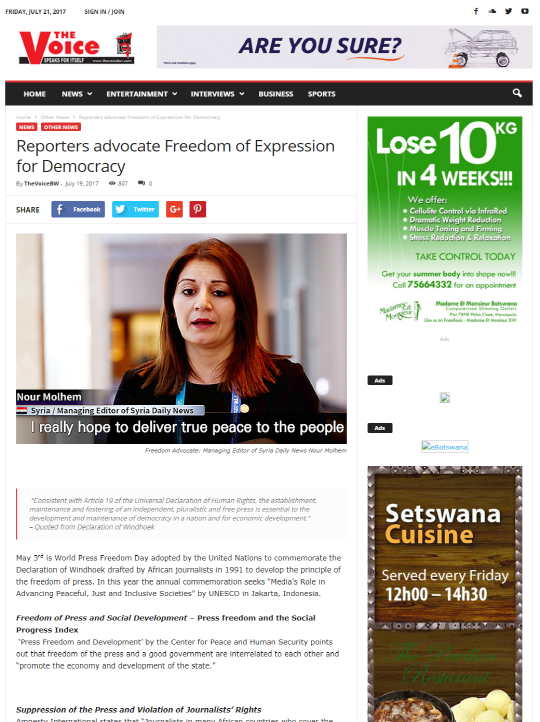 May 3rd is World Press Freedom Day adopted by the United Nations to commemorate the Declaration of Windhoek drafted by African journalists in 1991 to develop the principle of the freedom of press. In this year the annual commemoration seeks “Media’s Role in Advancing Peaceful, Just and Inclusive Societies” by UNESCO in Jakarta, Indonesia.

Freedom of Press and Social Development – Press freedom and the Social Progress Index
‘Press Freedom and Development’ by the Center for Peace and Human Security points out that freedom of the press and a good government are interrelated to each other and “promote the economy and development of the state.”

Suppression of the Press and Violation of Journalists’ Rights
Amnesty International states that “Journalists in many African countries who cover the articles on corruption and violation against human rights are being threatened. This is the very reason why press freedom is rising to the surface.”

The organisation further emphasised that governments should create an environment where a journalist can perform their duty without feeling threatened, pressurized or fear.

“Journalism is one of the professions that are most exposed to threats, and this is especially true for female journalists.
This constitutes a threat not only to women and quality journalism but also to freedom of expression, equality and democracy,” says Sweden’s Minister for Foreign Affairs Margot Wallström, greeting the World Press Freedom Day.

She further added to her statement: “We need to work continuously on different levels to ensure that these issues are never forgotten or ignored.”

Regarding the arrest of journalists from the Sunday Mail and NewsDay due to government restriction of information and a libel suit, a freelancer journalist participant Pindai Dube stated, “we even have government officials criticizing some of the media laws but nothing practical has been done.”

Tabani Moyo, advocacy officer of the MISA-Zimbabwe also added, “A law exists, which restricts the joy of free media and information access.”

Stronger dictatorial tendencies in governments around the world and increasing numbers of security issues such as terror and refugees in Europe were given as the reasons. Restrictions on broadcasting, reporting and news coverage through online are under surveillance of government in the name of national security.

In contrast, Sweden, a country of the world’s first press freedom law in 1766, abolished censorship of publications so that citizens are free to read public documents and participate in political discussions.

According to Anne Höglund, Ambassador of Sweden to the Republic of Korea, the Swedish Freedom of the Press Act played an important role in shaping the present welfare state that is Sweden, enabling free communication in an open society and national development through the critical inspection of the people.

Activities to Regain Freedom of Press
African countries and journalists have acknowledged the positive effects of freedom of the press, and are engaged in activities to secure it.

The Right2Know Campaign which began in South Africa in 2010, has its roots in “release of information” and “freedom of expression,” and is raising its voice to strengthen and unite the rights of citizens to know.

International efforts for freedom of press in relation to democracy and peace in the globe have been underway.

The Declaration of Peace and Cessation of War (DPCW), drafted by international law experts and Heavenly Culture, World Peace, Restoration of Light (HWPL) under the UN Department of Public Information (DPI), advocates international cooperation for peacebuilding at local, national and international levels.

With its peace initiatives in international law for peace and advocacy campaigns in international organizations, the DPCW addresses the need to establish a global order based on the peaceful resolution of conflicts, ethnic/religious freedom, and spreading a culture of peace.

The Managing Editor of Syria Daily News Nour Molhem, who participated in the Media Forum held last year, said, “It’s the first time for Syria to work with this kind of peace organization. I really hope to deliver true peace to the people of Syria.”

According to RSF statistics, Syria is a country whose press freedom index ranks 177th out of 180 countries; resolution of press suppression and the guarantee of freedom of expression of the press is urgently needed.