Press Conference for the 3rd Annual Commemoration of the DPCW

10 Articles and 38 Clauses of the DPCW, International Law for the Realization of the Unification of Korea and World Peace

The 10 articles and 38 clauses of the ‘Declaration of Peace and Cessation of War’ (DPCW) that was proclaimed on March 14th 2016 by HWPL and the HWPL International Law Peace Committee, which is comprised on international law experts from around the world, contain the key principles for the cessation of war and realization of peace. 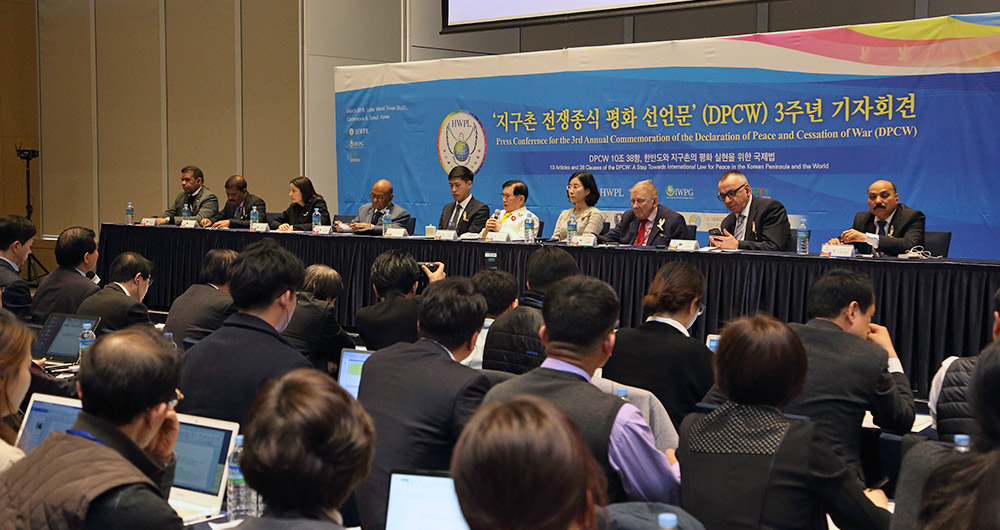 Through its 30 World Peace Tours, HWPL has been informing former and current heads of state, civil society organizations and the media from each country about the true need for an international law for peace. On the day of the press conference that was attended by 57 media outlets from Korea, HWPL’s Chairman Man Hee Lee stated, “Everyone, despite being busy, by gathering here together like this I can understand that you have come with the same heart that believes peace is better than war. I sincerely ask you (members of the press) to focus on reporting and working hard so that peace can be achieved (in both Korea and the rest of the world)”.

He explained, “After the proclamation of the DPCW, many legal organizations and governments expressed their appreciation and support, and the Legislate Peace campaign has been spread throughout the world, gathering support and involvement from many groups of people within society”.

He continued, “The DPCW has gained global recognition in regions such as Africa, Eastern Europe and Southeast Asia where incidents of conflict have continued to occur in modern times, some of which are still on going at this moment. The International Law Peace Committee (ILPC) members have continued to gather and discuss about the roadmap to legislate this document at an international level through the United Nations and the legislative bodies of each nation.

Finally, in 2018 the Pan African Parliament in Africa agreed to work together with HWPL and support the DPCW by signing an MOU with HWPL. Three nations also officially expressed their support at the national level. In Europe, the International Centre for Black Sea-Baltic Studies and Consensus Practices (Centre BBS) also signed an MOU with HWPL since many former and current presidents of Eastern European countries have a desire to help their nations, some of which are still in turmoil”. 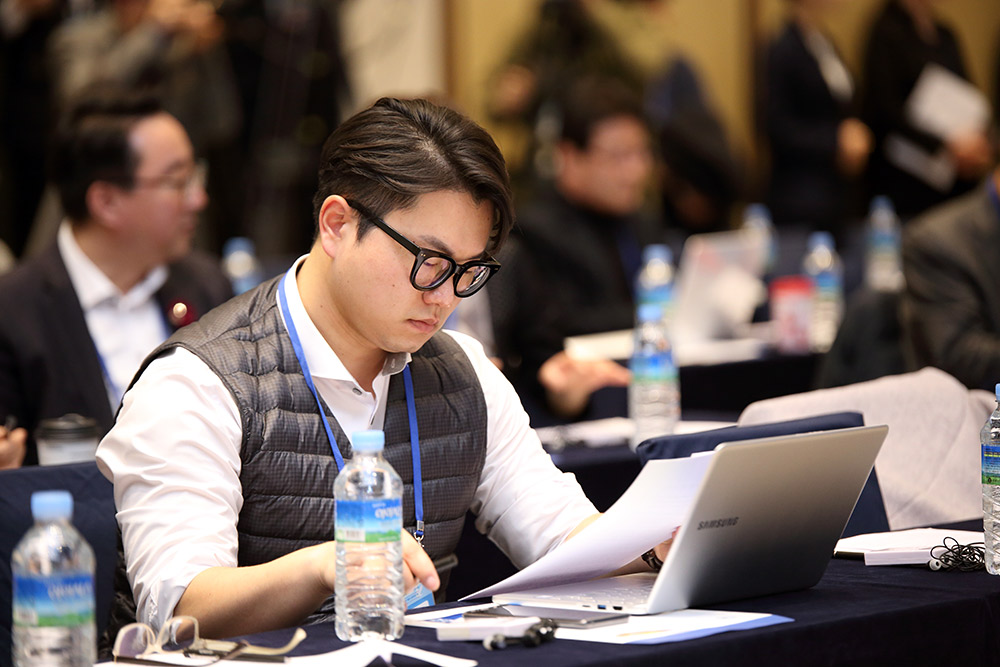 He went on to say, “The Third Annual Commemoration of the WARP Summit was held in 2017 under the subject of ‘Establishing Cooperative Governance for the Development and Implementation of the DPCW’ and sought to construct a system of cooperative participation among international organizations, governments and civil society for the acknowledgment of world peace. Even prominent educational leaders, such as ministers of education and professors, signed an MOU to implement peace education under the guidance of HWPL. Many schools, universities, professors, and students have requested an organized syllabus to learn about the DPCW.

Another major discussion was regarding how the UN can adopt the DPCW as a legally binding document and when the most suitable timing would be to submit the DPCW.
It was concluded that the DPCW will be submitted to the United Nations within this year or at the beginning of next year. Our committee members will support and continuously seek paths to gather additional national census for the DPCW.

The strength of HWPL is awakening the civil society and uniting all citizens with idea of peace. Through this, the DPCW will be made known to the all the leaders of the world, even to the United Nations, and eventually the DPCW will be adopted as a resolution to be implemented and legislated in each nation to protect global civilians,” explaining about the future plans for implementation. 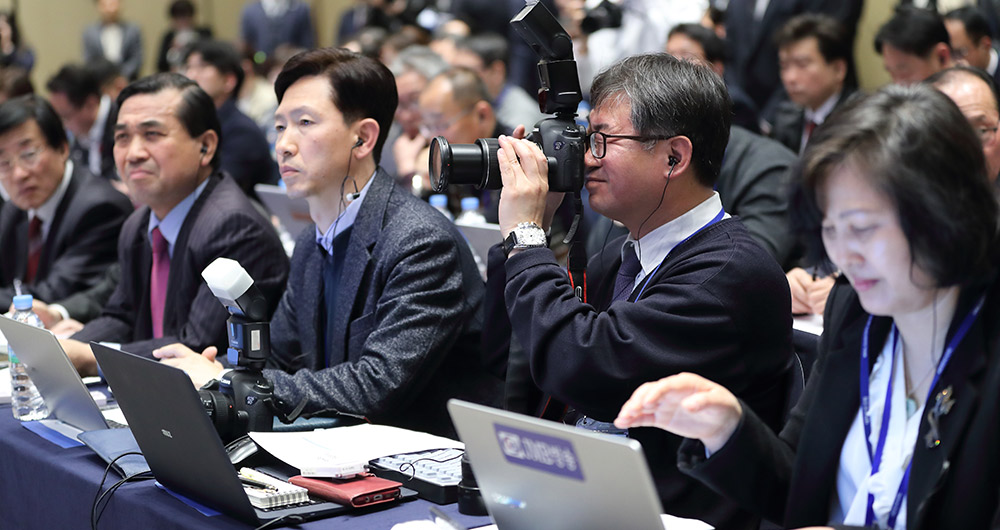 When asked about the future plans of the “Peace Letter Campaign”, which calls for support of the DPCW, the General Director of IPYG Mr. Young Min Chung, stated, “Since the campaign began in 2018, approximately 200,000 handwritten letters were written last year and delivered to the presidents and prime ministers of seven countries. Handwritten letters have also been delivered to President Moon Jae-in of Korea over four times. The handwritten letter campaign, which began only last year, has expanded even further this year and has gained support and involvement from not only the youth, but also all members of civil society and leaders in various fields.

Starting from today, hundreds of thousands of handwritten letters will be written and delivered to the heads of state and UN ambassadors from 193 countries worldwide. The contents of these handwritten letters that are being delivered include the need for the DPCW as the answer to peace, why it is necessary for it to be implemented as an international law and the aspirations of all citizens around the world,” emphasizing the importance of the Peace Letter campaign and the plans for its expansion moving forward.

Finally, in regard to the meaning of the 3rd anniversary of the proclamation of the DPCW, HWPL’s Chairman Man Hee Lee, explained, “It is to put an end to war around the world, and if there is no war, then the world of peace can be realized. That is why we want to achieve a world of peace that is free from war, which can then become a shining legacy for future generations. If you stop doing this for even a short while, then it will just cool down. We must do it until the time when it is completely finished. If it is done in this way, then you will not be still but will continue working hard.

One more thing, the cessation of war or the realization of peace are not things that are the personal work of a single person. If we are called as the family of the world, then it goes without saying that this is relevant to each one of us. If we truly value this world and ourselves and love the citizens of our own countries, then not only leaders but everyone should acknowledge this. It doesn’t make sense to not give unconditional support. If there is something wrong, then the reason must be stated clearly, but just refusing to do (without giving a reason) is not right. Do not be like that. If all us together become one in heart and have the same will, then we must create a world without war”.

He then directly addressed all the reporters and members of the press present stating, “Try reading the 10 articles and 38 clauses of the DPCW. All of this work will be done quickly only if the reporters take the lead. Please remember this,” reiterating the importance of the role that the media plays in the achievement of peace.