The Peace Delegation of Heavenly Culture, World Peace, Restoration of Light (HWPL) went on its tour, which lasted for six days from 1 April, and met with former and incumbent high-ranking officials of Eastern Europe at an international peace conference that was hosted in cooperation with various organizations. They promised to cooperate for global peace and discussed ways to achieve interaction and harmony among religions and peaceful unification of the Korean Peninsula through peaceful 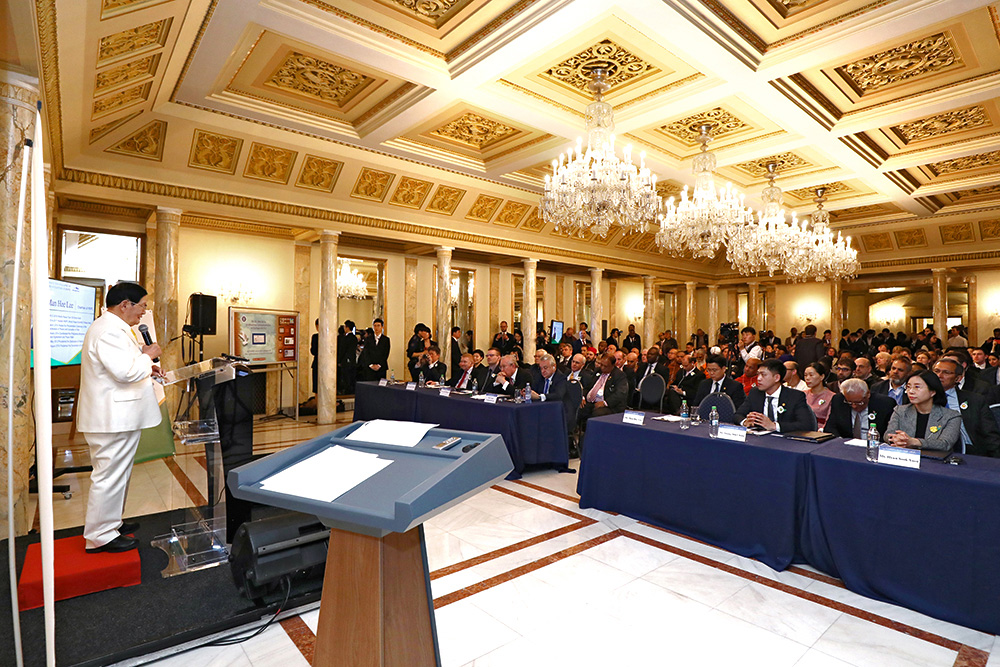 As Romania holds the presidency of the Council of the European Union for the first half of 2019, discussions on the stability and peace of Europe as well as the international community have taken place actively in Romania. Meanwhile, a peace conference was held on 1-2 April, and in attendance were leaders, governments, and civil society groups of various countries, and international NGOs associated with the United Nations.

The conference was hosted by the Institute of Advanced Studies on Levant Culture and Civilization (ISACCL) in cooperation with the Ministry of Foreign Affairs in Romania, Heavenly Culture, World Peace, Restoration of Light (HWPL), Centre for Baltic-Black Sea Studies (Centre for BBS), University of Bucharest, National University of Political Studies and Public Administration (SNSPA), Romanian Foundation for Democracy (FRD), and Inter-Parliamentary Coalition for Global Ethics.

During the inaugural session, which was held at the Plenary Hall of the Romanian Senate on the 1st, Hon. Emil Constantinescu, Former President of Romania, gave a speech on “30 Years After the Fall of Communism” He addressed the situation at the time of the fall of communism and social issues that occurred after it and proposed the direction for the future. Călin Popescu-Tăriceanu President of Senate of Romania said, “Cultural diplomacy is smart power. Understanding different cultures bring us closer.”

After the inaugural session, about 80 religious leaders from Christianity, Buddhism, Judaism, Islam, and more gathered at the National Museum of Art of Romania and Ramada Hotel. They exchanged opinions on the topic of “The Role of Religion for Global Peace.”

Mr. Shin Chang Kim, the General Director of Department of International Relations of HWPL, said, “Religion has the greatest influence than any other cultural elements. Not only does it establish a mental foundation in people, but it brings about changes in their behavioral patterns. When cultural diplomacy actively develops through religion, peace and harmony can be advanced.”

During this session, the World Alliance of Religions’ Peace (WARP) Office was introduced as a new platform for cultural diplomacy. The WARP Office is established in 129 countries, where religious leaders are meeting to hold dialogues focusing on studying and comparing religious scriptures.

Imam Amir Aziz from Islam of Ahmadiyya-Moschee in Wilmersdorf, Berlin, stated in his speech that the WARP Office is “a phenomenal instrument as a new approach to peace building by religion.” “The religious scripture comparison held in the WARP Office is an unprecedented type of discussion based on the standard of a trustworthy scripture. And I am convinced that it will unite us as one,” he added. 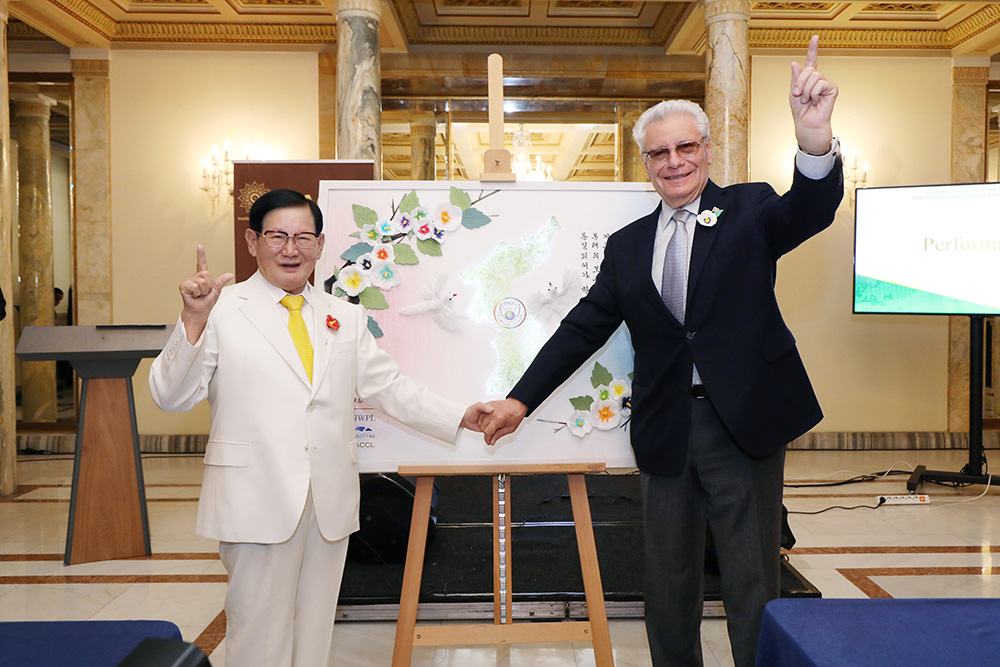 On the 2nd, a forum for peaceful unification of the Korean Peninsula was held at the National Museum of Art. In attendance were five former heads of state from Eastern European countries, peace activists from Europe and Asia, leaders of human rights organizations, and journalists.

Mr. Nicolai Sprekels, President of SARAM (meaning “people” in Korean), a human rights organization for North Korea, said, ”Peace that requires a sacrifice of humanity is only assumed as half peace. Peace doesn’t only refer to the unarmed state, but it is perfectly accomplished when it is consistently kept. Currently, the situation of North Korean human rights is getting worse. As an NGO in Europe, we will keep supporting the unification between the two Koreas.”

Hon. Emil Constantinescu suggested the direction for peacebuilding on the Korean Peninsula by saying, “It is necessary to have political and military cooperation based on the mutual trust for the unification. If we plan with the foundation of the precedents of Eastern Europe’s transition from communism to democracy, along with international exchange, it will be of great help for us to establish worldwide governance that the whole world needs.”

Mr. Man Hee Lee, Chairman of HWPL, pointed out that the division of North and South Korea and the Korean War were caused by political factors such as conflicts of interests among neighboring countries and stated, “How would the world think of a people who point guns at each other? North and South Korean leaders should bear this in mind. As seen in the case of Germany, reunification should be achieved by the people, not politics or law. If North and South Korean people come forward to reunify, nothing will stop them.”

The basis of a peaceful life is peace education

“Who should first be the teacher of children in the world? It is their families, their neighbors, and the society. For a peaceful world, it is not too late to start this work of peace now.”
- Man Hee Lee, Chairman of HWPL 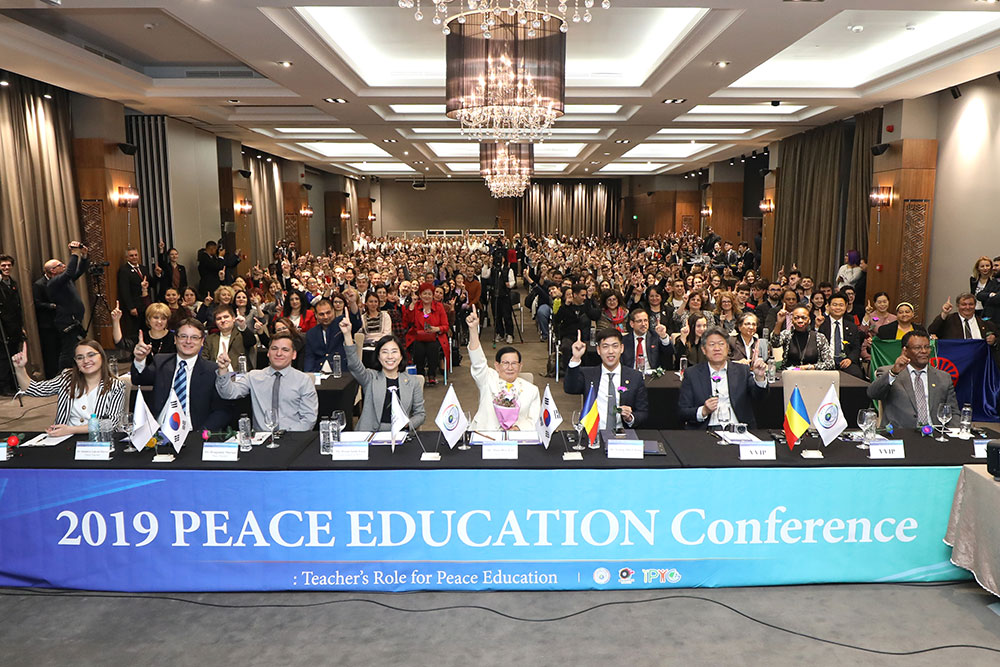 Starting with the schools and teachers of Master Peace, peace education has been carried out in European countries with the teaching materials published by HWPL.

Mr. Dragomir Marian, President of Master Peace, presented the progress report of the peace education program. “Through Peace Education over 5 terms, we have educated children how to prevent and resolve conflicts and violence. Peace exists in the context of family, fellow groups, and societies. Through education, we have realized that teaching the principles of peace in the early stage of life can transform the youth to embrace peace,” he said.

This day, HWPL and the Institute for Advanced Studies in Levant Culture and Civilization (ISACCL), which is a think tank in Romania, agreed to maintain a partnership for building a peace network through cultural diplomacy such as peace campaigns and education.

To spread a culture of peace, HWPL has signed HWPL Peace Academy MOU with 208 educational institutions in 21 countries, where peace education is being carried out.