France, where civil revolution started,
kindles a fire of peace in Europe by the power of the people.

On May 24th, about 200 youths gathered in front of the Ibis Hotel in Paris, and the Eiffel Tower, France’s representative landmark, in commemoration of the 6th anniversary of the Declaration of World Peace. This event was held in cooperation with Heavenly Culture, World Peace, Restoration of Light (HWPL), International Peace Youth Group (IPYG), and International Women’s Peace Group (IWPG), also sponsored and supported by renowned international organizations such as, AIESEC in France and Regards de Paix.

During the event, along with the 6th Annual Commemoration of the Declaration of World Peace, the Peace Walk also took place. The event started with congratulatory videos of Anna Bossman, the UNESCO Ambassador of Ghana, Oumar Keita, the UNESCO Ambassador of Mali, and also continued with congratulatory addresses of Gaura Bhakta, the Guru of ISKCON, and André Lokisso, the head of the Assistance To The Integration Of Demobilized Child Soldiers, which is one of the UNESCO affiliated organizations with the country of Africa.

“I really liked to feel the power of youths who are longing for peace and I never knew that there were so many youths who wanted to have peace like this,” said André Lokisso. After the congratulatory addresses were given, an introduction about HWPL, the Declaration of World Peace, the Declaration of Peace and Cessation of War (DPCW), and the purpose of the Peace Walk, was presented in order to emphasize, once again, the importance and meaning of the event.

The Declaration of World Peace is the foundation of the DPCW. The DPCW is a phenomenal declaration that has the answer to cease all wars, and is soon to be submitted to the UN as a resolution. Everyone around the world is urging the heads of state to support the DPCW through the Peace Letter Campaign.

Today, millions of peace letters have been sent to a number of national leaders. Young people around the world are writing these peace letters with a longing heart for peace. It is expected to stimulate the heads of state to make a peaceful world free of wars.

During the event, Jacquiline Nyavor, a graduate student of Sciences po Paris, recited her letter to President Emmanuel Macron. All the participants were inspired by her letter and gave her a big round of applause, and they eventually signed to support the DPCW.

At end of the event, the Peace Walk took place. About 200 youths shouted, “We want peace! We are one!” in one voice as they stepped forward towards their destination, the Eiffel Tower. The crowds within the Peace Walk were safely escorted by the police along the streets of central Paris and caught the attention from many citizens. Some, on the street, even joined the march while shouting the chant together. Through this event, the people of France showed the world their longing heart and enthusiasm for peace. 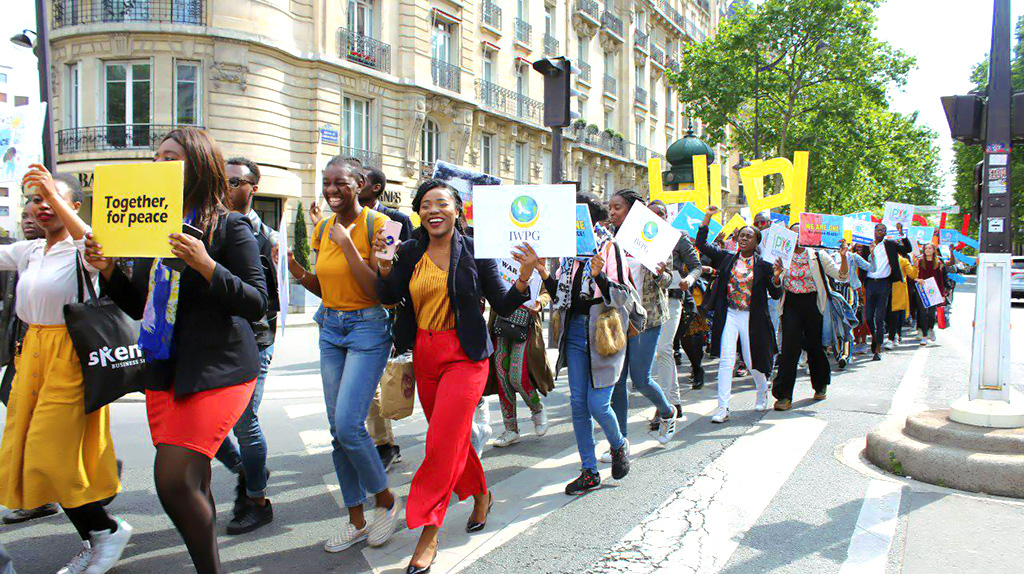 France is the first country in the world to have a civil revolution. In France, where the history of the global civil revolution began, the upcoming peace event attended by the youth as well as media figures and the heads of such organizations, will have a great influence in France and Europe.