April 29, 12:00PM CET Co-hosted by HWPL, and UNESCO Ambassador in Guinea-Bissau, ‘Solidarity and Cooperation during the Pandemic: The crucial Role of the NGO and the State-Tackling social issues that occurred over the pandemic through SDGs'. The event was attended by 484 people from 21 countries, including France, Czech Republic, Austria, Malaysia, the Philippines, Tunisia and Mali, as well as former and current politicians, the heads of NGOs and citizens from all over the world. 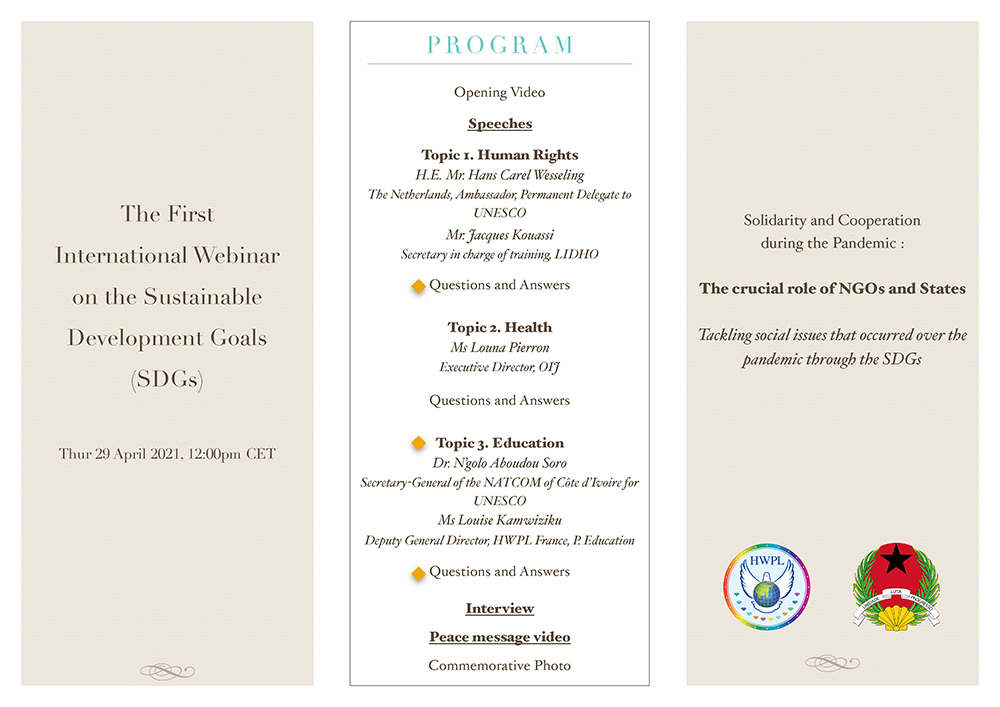 In the field of human rights, Hans Weselling, Ambassador of the Netherlands UNESCO Permanent Representative and Jacques Kouassi in charge of education and animation of the Ivory Coast Human Rights Federation, Alberto Maverengue Augusto, Permanent Representative of Mozambique UNESCO and Louna Pierron, Representative of the International Organization OIJ, in the field of education. N'golo Aboudou Soro, Ambassador of the National Council of Ivory Coast UNESCO, and Peace Teacher Louise Kamwiziku HWPL attended.

Jacques Kouassi, who was in charge of presenting the human rights field, explained the ‘COVID-sensitization project' in Abidjan, the capital of Ivory Coast, from September to November 2020. He said, “Ivory Coast is a diverse ethnic group. Therefore, we promoted our project in French and nine regional languages using 'Radio Broadcasting', the main medium of Ivory Coast, and also cooperated with regional associations to be more aware of COVID-19 among citizens of various ethnicities. I tried to do it.”

Louna Pierron, who gave a presentation on the campaign to build free women's hygiene dispenser movement in French middle and high schools. She said, “"With a year's effort, 15 schools in France have now installed free sanitary dispensers, which will expand," She also said that during the pandemic, a free rose sharing event was held so that medical staff and citizens could better understand and cooperate with each other.

Louise Kamwiziku, who is in charge of education, said, "There is an increasing need for education to build character and develop moral skills," referring to human rights, freedom of expression, and basic rights in education threatened by pandemics.

She announced the signing of the HWPL peace education MOU with the Philippine government, the Ivory Coast government and the Ukrainian education office, and introduced the implementation of the peace education camp at the Dolní Počernice Daycare Center in the Czech Republic. She also announced plans to study the Peace Education Program jointly with the Interior Ministry of Mali and the Civil Protection Ministry and implement it at the Mali Women's Detention Center.

Citizens' questions and answers following the announcement of SDGs by each country were mainly asked about the background of the ongoing movement and its complementary points.

A participant from Madagascar mentioned that, “I was curious if the activities carried out in the four countries could be applied to realize the SDGs of other countries.” He said, “The approach of the project should be different due to the different national and ethnic characteristics, but as today, the country and citizens come up with ideas together. I think that if we look for complementary points, the realization of SDGs will be accelerated.” He reiterated the need for solidarity for the successful implementation of the SDGs.

Rosaline Howards, who attended from IPYG, an international youth peace organization under HWPL, mentioned that, “We were able to reaffirm that SDGs cannot be realized just by the government's efforts." “We need to unite with the governments of each country, not individual activities of NGOs,” she said. “I look forward to more cooperation among key stake holders.”