Hello everyone, I'm Alex Kim. I am an instructor about Media Literacy. I’m live in a city of Busan with a beautiful sea. Media Literacy, Is it unfamiliar words, right? First of all, media comes from the word medium and means communication tools that convey messages and information such as television, movies, YouTube, radio, podcasts, music, books, magazines, writings, news, and Social Media. The ability to read, interpret, and produce critically is called , rather than unconditionally accepting messages and information delivered through this media.

I'll tell you a story of the King of Korea. Shall we listen to the story? About 600 years ago, Korea was called Joseon, not Korea. King Sejong was one of the most respected kings of the Republic of Korea now. 14 years after the Sejong came to throne, there was an epidemic like COVID-19 in Joseon. The king ordered his servants to take special measures. It is to stop construction work that is not urgent. In addition, He ordered the treatment of the poor. And He had his servants look into the street.
However, Sejong was shocked when he heard the report of his servant who had been looking into the street situation. A blind woman almost died hugging her child because she had nothing to eat. So the king told his servant to take responsibility and distributing rice. And He'll send doctors to each region across the country, so He put up a poster on the wall telling them to get treated if they have an epidemic. And there was also a message that says to wash hands frequently, which is similar to today's prevention of COVID-19 infectious diseases, and to prevent splashing of smear when sneezing. Nevertheless, the epidemic continued. The king asked his servant.
Why there are so many people who get sick even though they have told us how to avoid getting sick and how to get sick. Then the servant replied that it was because no one could read. At that time, Joseon was using Joseon's language, but there was no writing to record it, so it brought Chinese characters from China. Only the top class could read and write Chinese characters in Joseon, so the general public did not know the writing. Therefore, no matter how many notices were posted across the country, no one could read and know, so they could not follow the epidemic prevention rules. So King Sejong created Hangul, the Korean alphabet.

At that time, the people of Joseon lacked this "Media Literacy" ability, and unfortunately, they were more easily exposed to the epidemic. Of course reading can be the beginning of Media Literacy, but not all. Media Literacy is not just about reading, it's about understanding the context of the article and discovering the real meaning behind it. This is critical media reading. Furthermore, the ability to produce one's thoughts through the media is Media Literacy. 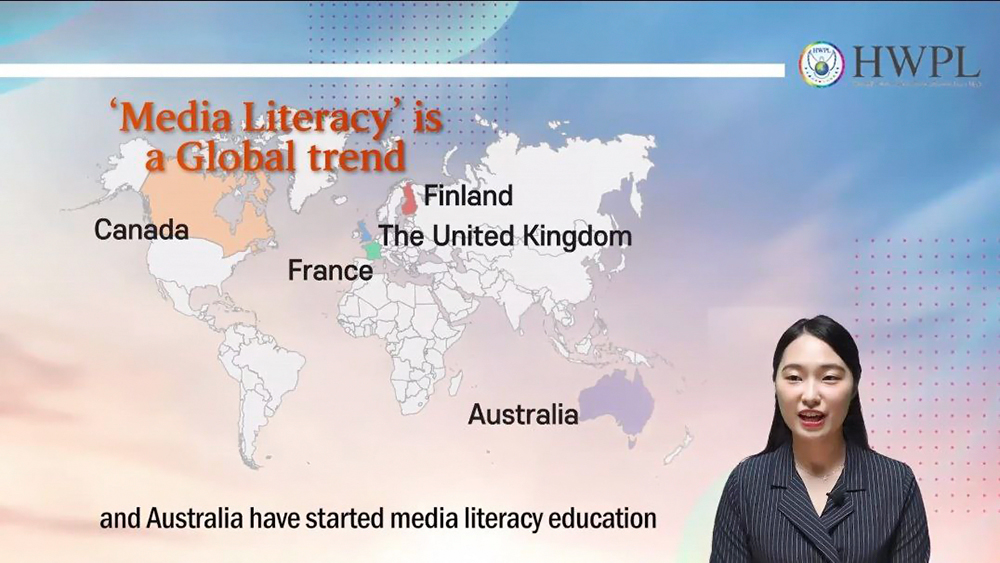 #Media Literacy Worldwide Trends
Currently, Media Literacy is a global trend. Major foreign countries such as Finland, the United Kingdom, France, Canada, and Australia have started Media Literacy education in the 1960s and introduced it to school education. Although the concept of Media Literacy in the digital age is slightly different from country to country, overall, it is important to use it responsibly and safely. Although it varies slightly depending on the situation of each country, Media Literacy is a basic skill and virtue that citizens must have to create a healthy and peaceful world. In addition, as a digital society, it has become an important era for various subjects to make good use of digital technology, and diversity and equality are also included in the goals and values that Media Literacy should pursue. But the important thing is whether we have Media Literacy skills and how we are exercising to.

#Fake News
In addition to the COVID-19, there is one thing that spread during the Pandemic era. That is the fake news. There have been a lot of canard groundless rumors about COVID-19 and speculation about uneasy future. That's why the word info-demic came into being. As we live in the digital media era, it is much easier and faster to spread information through smart phones and Internet networks.
The Fact is delivered quickly, also fake news is delivered quickly too. But the fake news is wrong. It means that there is fact news, but it can't be 100% fact news because it's chosen and organized by man. The news is 100% not true by being chosen by the journalist because the journalist’s subject matter is involved.

There is also a view that fake news should not be used because it can dampen the freedom of expression of the media. In addition, there are many other forms of misinformation besides news, so more and more people say that it is right to admit it information comprehensively instead of news. So, the British government has officially decided to use the term misinformation instead of fake news. The European Commission, as well as the UK, is encouraged to do so. In Korea, misinformation and disinformation are used separately.

#News Features
- Is the information in the news 100% true?
In such a media environment where there is a lot of information that is difficult to discern, we need to be able to determine which information is right or wrong. To do so, Media Literacy is needed. We should be able to get useful information through the news. When you as a citizen watch the news, your' lives should go in a positive and productive direction. For example, the news should deliver information so that when a typhoon comes, it can take action to reduce the damage caused by the typhoon. During the election period, you should provide information about candidates running for election so that voters can vote according to their values.

But does all the news provide useful and exact information? Broadcasters and newspapers have the burden of filling up daily news and articles. All reports cannot be filled with coverage and personal information, so they rely on corporate or government press releases. Due to insufficient verification of facts, exaggerated reports or false reports are unintentionally made. Sometimes advertising revenue prevents us from reporting on major advertisers in a more friendly way or critical way.

Due to the recent deterioration in the management of media companies, the quality of reporting has been lowered and reliability has been reduced. As Internet new media replace the role of the media, newspaper and broadcasting companies are deteriorating.

Therefore, some newspapers write articles for money. So readers should also have the ability to distinguish themselves. The article should not be unconditionally believed but should be checked once more to see if it is true and verified if it contains exaggerated content.

- News consists of facts and opinions.
What was the process before we watched the news? I will explain the newspaper with an example. First, reporters go to the office and have an item meeting. "What are we going to cover today, highlight this issue? Let's not cover this case." And then Write the article and place it in the newspaper. Sixty to seventy percent of the newspaper's pages are filled with straight articles. Straight articles are daily news, and they should be written based on fact, and because they are written quickly, the amount of article is small.

The commentator focuses on explaining and analyzing the background of the incident and is mainly written by senior journalists. Planning articles are written by collecting and covering data in the long run. It is written in a feature form with one side dedicated. The editorial is a commentary on a problem that is difficult for readers to understand and contains opinions from newspapers. A column is written by columnist or reader and is not an article that describes subjective opinions or impressions.

The reason to identify the type of news is to distinguish between 'fact' and 'opinion'. If you confuse "opinion" with "fact," one side's argument will become true, accept "fact" as "opinion," and interpret "fact" as "opinion." You interpret it in the direction you want to hear.
When reading and watching news, it is necessary to consciously interpret 'fact' and 'opinion'. The way to distinguish fact from opinion is to read at least two articles, not just one article about an event. Then you can tell the difference between facts and opinions by finding out that the two journalists have a common facts and opinions are different.

#Role of News Consumers, Distributors
If there are people who make news, there are people who watch, consume and distribute news. Where do you belong to? Nowadays, you can easily act as a journalist through YouTube and Social Media even if you don't have to be a journalist in newspaper or broadcasting station. In other words, you can be news producers, consumers, and distributors. In fact, we are mostly consumers and sometimes distributors. Watching one news and telling people, "Did you see this news yesterday?" will be in circulation. Or sharing news links through messenger is also a distribution.

People tend to believe what people share, just as they believe in articles from authorized media outlets. "He's a trusty person, so the article he shares will be trusty." The sharing is followed by responsibility because it contains the meaning of certification that "this article contains what I acknowledge." Therefore, it is desirable to verify that the article I will read and share is true and does not have a biased view of the framed article before sharing.

There is another problem for consumers to think about. Everyone tends to believe what they want to believe. It's called self-confirmation bias, which refers to the tendency to find, see, and stay away from others. There are people who consciously look for it, but this trend comes out unconsciously, so the biased consumption of information is bound to get stronger and stronger. Therefore, anyone who has information bias and consistently consumes fake and provocative news should be considered to be involved in the spread of fake and provocative news. 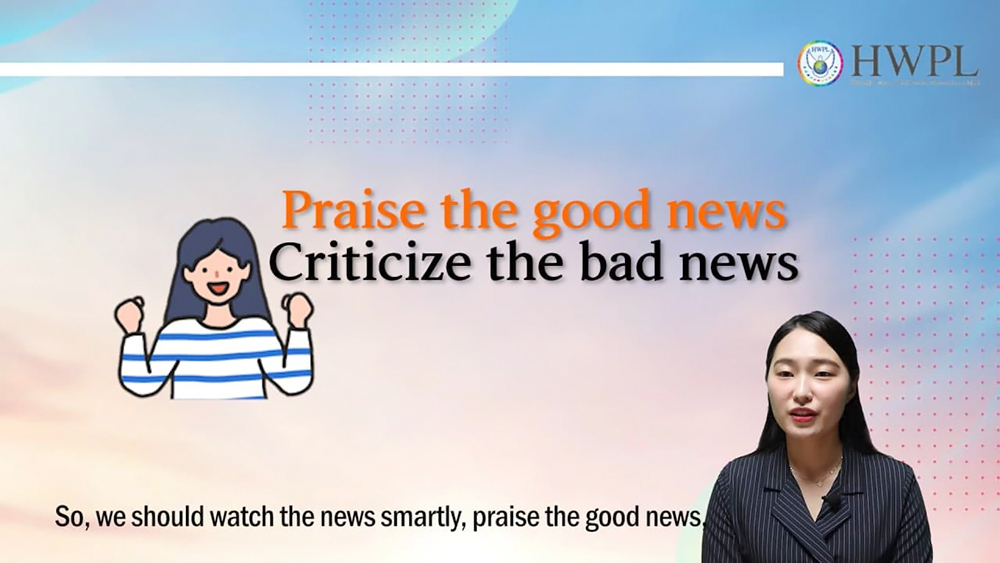 #Media Literacy for Peace
What would happen without the media called the journalism? Those who do not see the weather forecast and engage in agriculture and fishing can be in danger of their lives as well as property damage. And we can't vote properly because we don't know which candidate ran during the election. You can get damaged when a forest fire breaks out in the next town. Information on national important events is not available.
Since information is not shared smoothly, there may be a lack of understanding of groups that have different characteristics from mine. It's going to be a really sad situation, right? So, we should watch the news smartly, praise the good news, criticize the bad news, and encourage the media to do it’s job and the media can play its role well.
That's the role of smart news consumers, distributors. In that case, the world we live in can develop one step further and move the day of peace forward one step forward. The media is a public good as precious as clean air and safe roads. We need your continued attention to the media, news and journalism.

Okay, Now you can know what is the Media Literacy. You can easily meet fake news in a world where new media such as Internet broadcasting, YouTube, and Social Media in daily life. It's time for you to have the ability to distinguish between themselves. I'm sure everyone has experienced accepting misinformation as a fact. Therefore, we conducted Media Literacy education. I hope to you will be a youth who has the wisdom with Media Literacy. Thank you for coming and listening! We are one!