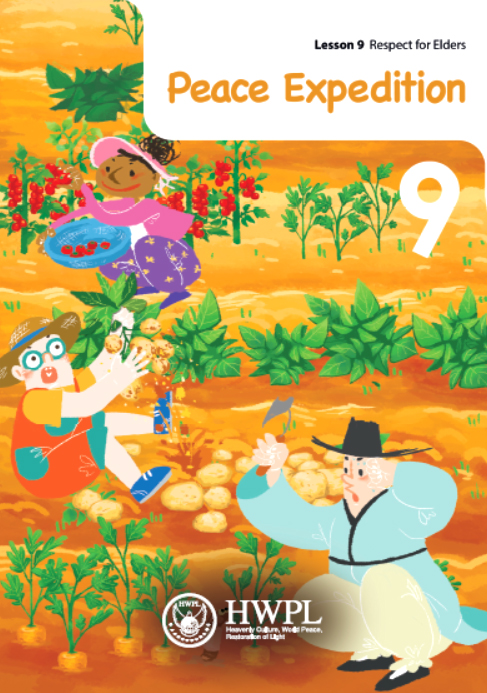 Section 1: Respect for Parents
It is a universal value that transcends era, region, and cultural differences for all humanity to love and respect their parents. Regarding the hard work of parents raising children, an American Writer Helen Steinger Rice said, “A mother’s love is something that no one can explain — it is made of deep devotion of sacrifice and pain.” Although parental love is present even in the animal world, remembering and repaying the love and grace of parents is a characteristic unique to humans. The heart to repay one’s parents is called filial piety. Even since ancient times, Greece has been well known for its strict culture of respecting the elders and parents. For example, in ancient Delphi, those who did not take care of their parents were put in prison. In Athens, those who neglect their parents or elders were fined, and some had their citizenship stripped away. Greek proverbs such as “Old people’s words are weighted with scales” and “He who respects his parents never dies,” reflect a deep-rooted culture of respecting parents and elders.

Section 2: Respect for Teachers
Teachers have played a key role in developing human history and civilization, not only as communicators of knowledge and skills, but also as those who have a great influence on the development of students' characters and values. Carl Jung, a Swiss psychiatrist, spoke of the importance of teachers and said, “One looks back with appreciation to the brilliant teachers, but with gratitude to those who touched our human feelings. The curriculum is so much necessary raw material, but warmth is the vital element for the growing plant and for the soul of the child.” A teacher takes care of students with love and attention, helps them grow intellectually and emotionally, corrects mistakes, and guides them on the right path. A parent’s effort alone is not enough for their children to become members of a society with a holistic personality. Teachers are “second parents” who professionally help and take responsibility in rearing and educating students in areas that parents may not be able to do. Therefore, we should respect our teachers, just as we do for our parents.

What is the best way to express thankfulness and respect to a teacher? According to the result of a survey conducted with 1,200 Korean teachers in April 2015, the teachers felt the most fulfilled “when feeling connected with their students (73.1%).” Second to this was, “when teaching well in class (20.5%).” Only 1.7% of the teachers responded, “when doing a good job in getting the paperwork done.” The survey results demonstrate that the primary concern of teachers is not just working, but “to communicate with and teach students.” Therefore, it can be stated that the greatest way to repay the grace of a teacher is to learn the teachings from the teacher well and grow into a necessary member of society. It is also good to visit the teacher frequently and to express gratitude and respect through letters.

Section 3: Respect and Peace
Rude words and behaviors are sometimes the cause of disputes among family and friends. In contrast, respectful attitude towards others can resolve conflicts in explosive situations. According to Professor Christine Pearson and Christine Porath in their book, “The Cost of Bad Behavior: How Incivility Is Damaging Your Business and What to Do About It,” rude behavior does far more harm to individuals, organizations, and society than we generally think. According to Pearson’s survey of more than 800 employees in 17 countries, 47% who were treated rudely deliberately shortened their work hours, 63% wasted time avoiding the perpetrator, and 66% showed a decline in performance. 12% even resigned because they were unable to handle rude behaviors. According to additional research, if an individual is frequently disrespected, one’s thinking ability decreases, and the risk of developing various illnesses increases.

Confucius was a Chinese philosopher during the 5th to 6th century B.C. who laid the foundation for the studies and ideologies of East Asia. But the days of Confucius were not peaceful. About 2,500 years ago, during the Spring and Autumn period, China was divided into several countries, and this became a chaotic time where there were constant war and social order collapsed. It was common to see subjects kill kings to gain power, children kill parents to possess properties, and officials rob and exploit the people. It was a dark time where unlawfulness and violence were rampant, and humanity was lost. Confucius’ ideology was to build a justice and peaceful world during this bleak time. He thought it was imperative to establish the order of the collapsed state and society. However, because force cannot end the era of violence, he emphasized the need for politics of virtue based on respect and love for humanity. The core of Confucius’ teaching is benevolence, which can be interpreted as love or being humane. In other words, benevolence is the attention and love for people and he perceived this to be the basis for building a peaceful world. Additionally, benevolence is expressed through etiquette. It is etiquette to carry out filial duties to parents, show respect for teachers, and build virtue for the people. The order to realize a world of peace through benevolence and manners is to first set our hearts right, cultivate our personal life, put the family in order, put the nation in order, then put the world in order. We must first love ourselves and our family, and that love will overflow to the country, the world, and even to the animals and plants. If the order of human relations is formed based on benevolence and manners, hatred and violence will naturally disappear, and the world will be peaceful.

Everyone wants to be respected. Conversely, being ignored or insulted by another individual creates a sense of hostility and revenge, which often leads to violence. It can be often seen in the news in examples of cases of assaults and murders that started with minor profanity. Such situations also occur within groups, peoples, and countries. Therefore, respect is necessary to prevent unnecessary violence and to create a peaceful society. Respect is expressed by love and regard for others, and this is a culture of peace essential for humanity.