HWPL’s 8th Annual Commemoration of the Declaration of World Peace 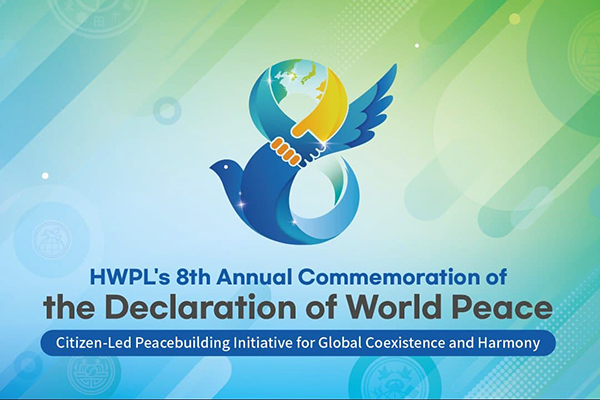 Through the Declaration of World Peace proclaimed eight years ago, HWPL proposed an effective and practical measure to achieve world peace and cessation of war in which the entire world can implement. Along with this proclamation, over 30,000 youths from around the world participated in a peace walk that spread to various continents and countries to be a symbol of a grassroots global peace movement.

Based on these achievements, this year’s commemoration included discussions on designing a citizen-led peace movement and strengthening cooperation to promote humanity’s coexistence and harmony as we overcome global uncertainties that stem from hatred, conflicts, misunderstanding, and lack of communication in this current pandemic era.

Heavenly Culture, World Peace, Restoration of Light was founded on 25 May 2013, which was also when Chairman Man Hee Lee of HWPL proclaimed the Declaration of World Peace he drafted. Chairman Lee proposed a basic framework for international cooperation for peace through this declaration, which includes the participation of global leaders for international law for peace, creation of a global peace network of youth and women, and the role of media. Around 30,000 citizens participated in a peace walk that took place on the same day of the declaration, which became a symbol of the public’s voice for peace.

The fundamental principles of the Declaration of World Peace evolved into the Declaration of Peace and Cessation of War (DPCW), which proposed a progression for peace in which every individual, country, international organization, and non-governmental organization can participate. The DPCW deals with the current global issues of conflict that have been intensifying through war and its clauses include prevention and solution for conflicts, gradual reduction of war potential and repurposing weapons for public welfare, practical approach to religious and ethnic issues, and spreading the culture of peace. International organizations as well as governmental and non-governmental organizations from over 193 countries declared their support for the DPCW, and the result of their participation for this peace movement was also made possible by the participation of the citizens around the world.

HWPL declared that it would “March On Toward Sustainable Peace in a Pandemic Era” to respond to the pandemic. Many risks to peace have appeared globally in different forms during this crisis. In light of this, the event will diagnose various global issues such as hatred against certain groups, education gaps, climate change, the economy and welfare, human rights infringement, violence in cyberspace, and religious and ethnic conflicts to search for a solution.

The realization and outcome of the peace development plans that will be proposed in targeted countries and regions at the event depend on the participation and commitment of the members of the society (stakeholders). HWPL plans to announce how to build educational infrastructure to expand the implementation of its peace education. And the IPYG and IWPG will present a citizen-led peace development initiative and action plan presented through an international network. In addition, we would like to call for international solidarity and support to achieve these plans.

6th Annual Commemoration of the Declaration of World Peace

The 10 articles and 38 clauses of the Declaration of Peace and Cessation of War (DPCW), which are clearly seen embedded within the contents of the Declaration of World Peace, directly state the responsibility that a nation has as a member of the international community, including the maintenance of friendly relations between states, repurposing weapons that kill to benefit humanity and respect for international law. It also includes a standard for the freedom of religion and the eradication of violence and illegal acts caused by religion, as well as the spreading of a culture of peace. The DPCW also emphasizes the participation of citizens in building a peaceful global village through areas such as education and welfare.

To promote peace through the voluntary participation of citizens, the event held on May 25th every year in more than 100 cities in 50 countries around the world is now being held simultaneously with the ongoing “Legislate Peace” Campaign, which is a movement that has spread to 174 countries with over a million citizens around the world urging for the implement international law based on the principles of peace embodied in the DPCW. In particular, approximately 160,000 letters of peace were handwritten by the youth last year to advocate for the DPCW and support the establishment of world peace, and in March of this year letters were officially sent to the heads of state from 193 countries, calling for support for the DPCW.

On 25 May 2019, with the slogan, “‘RE: Peace Letter’, a Miracle of 193 Countries: May 25th, replies to Peace Letters start a miracle.” participants will urge the heads of state to send letters in response to the ones they received, and also write and send additional letters with messages of peace to high-level officials of governments and international organizations in 193 different countries.

5th Annual Commemoration of the Declaration of World Peace Resolving Conflicts and Spreading a Culture of Peace through the DPCW: Realizing Peace on the Korean Peninsula

The 2018 5th Annual Commemoration of the Declaration of World Peace was titled Resolving Conflicts and Spreading a Culture of Peace through the Declaration of Peace and Cessation of War (DPCW). In working for the common goal of peace, the Declaration of World Peace urged for shared efforts of all members of society, calling for individuals to work as peace messengers. It presented a goal of devising a legal measure recognized in the international community for peace and cessation of war and highlighted the leading role of the youth as future leaders of society. The Declaration was later further developed into more concrete codes of the 10 articles and 38 clauses in the DPCW

Recent developments including the widening channels of discussion with neighboring countries, the hosting of the 2018 Pyeongchang Winter Olympics, and the reignition of inter-Korean interaction in the private sector are changes that heighten expectations for governments and nongovernmental organizations alike. With such current developments in mind, this 25 May, HWPL plans a peace campaign with a slogan: Together for A New Start, Together for Peace. The citizen-oriented peace campaign will focus on free travel, exchange and interaction between the two Koreas, and will bring progress in terms of World Peace and Restoration of Light as the NGO’s name. 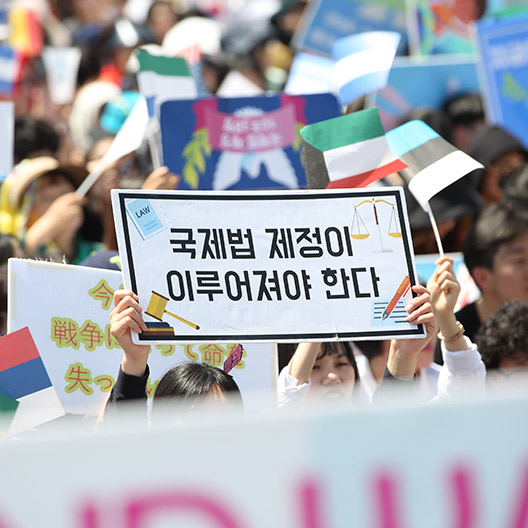 Spreading a Culture of Peace
'Talk＆Walk to Prevent Violent Extremism'

Of what use is a young life, born in our day and age,
if it is thrown away in this manner – thrown away without having
had a chance to bloom?
The spirit embedded in the Declaration of World Peace has become a seed sown in the hearts of the world’s youth that has blossomed into the value of becoming “active proponents of achieving peace”. As the message of the Declaration is now being realized in the youth’s involvement and actions in establishing peace, Worldwide Peace Walks and Spreading a Culture of Peace Campaigns were found as means of working together until peace is finally achieved. Since its initial proclamation on May 25, 2013, in major cities around the world, peace walks and campaigns to spread a sustainable culture of peace are in progress every year with various themes and programs. 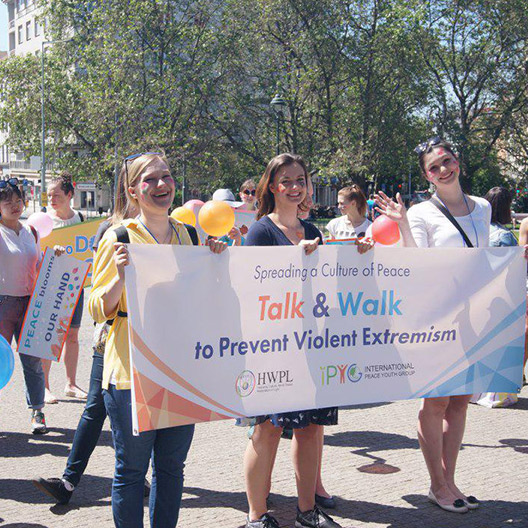 The 3rd Annual Commemoration of the Declaration of World Peace

Over 300,000 members participated in celebrating the 3rd Annual Commemoration of the Declaration of World Peace simultaneously in more than 105 cities worldwide, including Seoul, South Korea. Since its initial proclamation, the Declaration of World Peace has called everyone to further the cause of world peace by making it a reality in their direct environments. The commemoration in 2016 highlighted the global peace advocacy movement, the Legislate Peace Campaign. The majority of participants in the Peace Walk were seen signing their support for the Declaration of Peace and Cessation of War (DPCW) to be developed into a legally binding document that would be presented to the United Nations.

HWPL members and participants were also able to donate $43,284 for the Ecuador Earthquake Relief Fund, which was then delivered to Ecuador through the Embassy of Ecuador in the Republic of Korea. 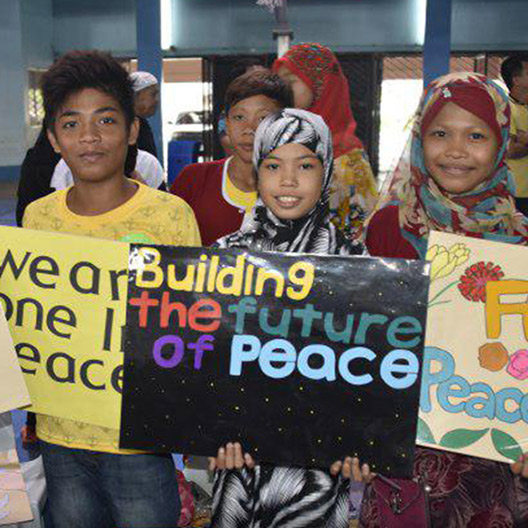 The 2nd Annual Commemoration of the Declaration of World Peace

In light of the recent earthquake in Nepal, participants donated roughly $40,000 as part of the Nepal Earthquake Relief Fund. The donation was then delivered to Nepal through the Embassy of Nepal in the Republic of Korea. 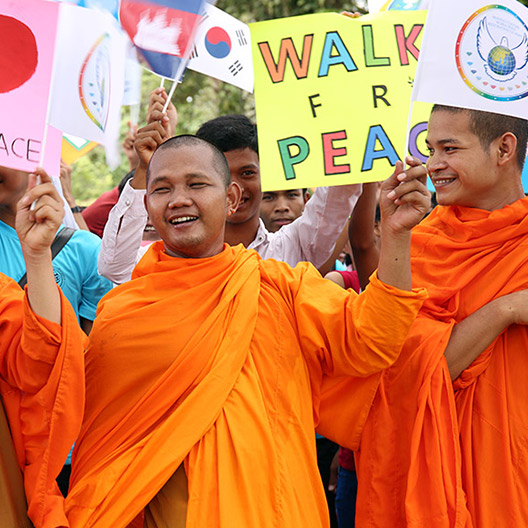 The 1st Annual Commemoration of the Declaration of World Peace

Various media outlets across the globe continued to report the World Peace Tours and peace activities of HWPL. As a result, exactly one year later, people who had been deeply moved by the sincerity of the peace movement celebrated the 1st Anniversary of the Declaration of World Peace in both Seoul and the UN Memorial Cemetery in Busan, South Korea, as well as in other major cities around the world. They celebrated the past achievements of working toward sustainable solutions for peace envisioned by the Declaration.

In remembrance of those who had sacrificed their lives during the Korean War to protect a country not their own, participants paid sincere respect to these fallen heroes. The event also called for measures to put an end to wars that continue to take countless lives of youths, who had not yet had a chance to bloom. 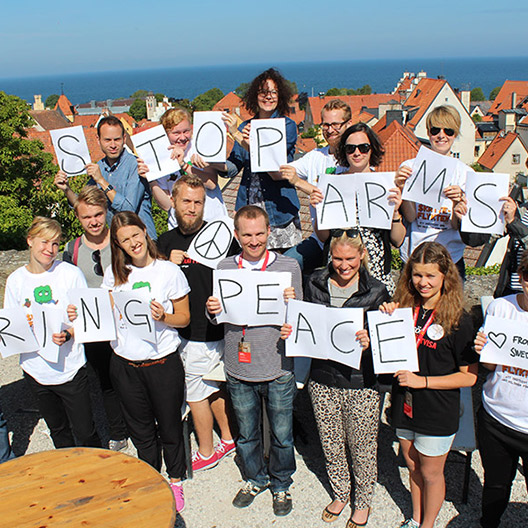 The Declaration of World Peace, first proclaimed by HWPL Chairman Lee on May 25, 2013, called upon people to acknowledge the dire need for world peace and defined the roles of heads of state, women, youth and the press in achieving peace. Over 20,000 people from 130 countries gathered to march for peace at the Peace Gate of Seoul Olympic Park, South Korea. Soon after, peace walks became a channel for both youth and women around the world to become empowered to speak in a unified voice for peace. 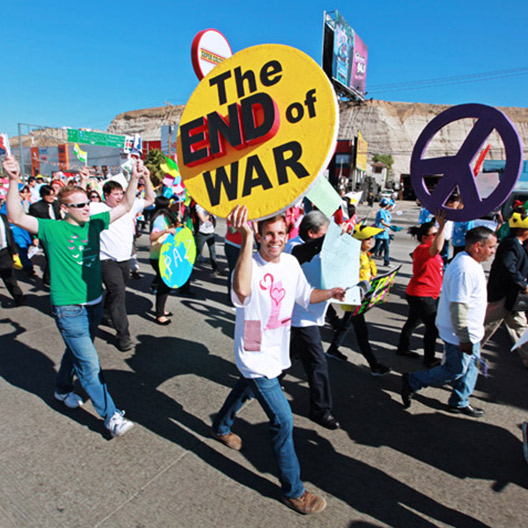