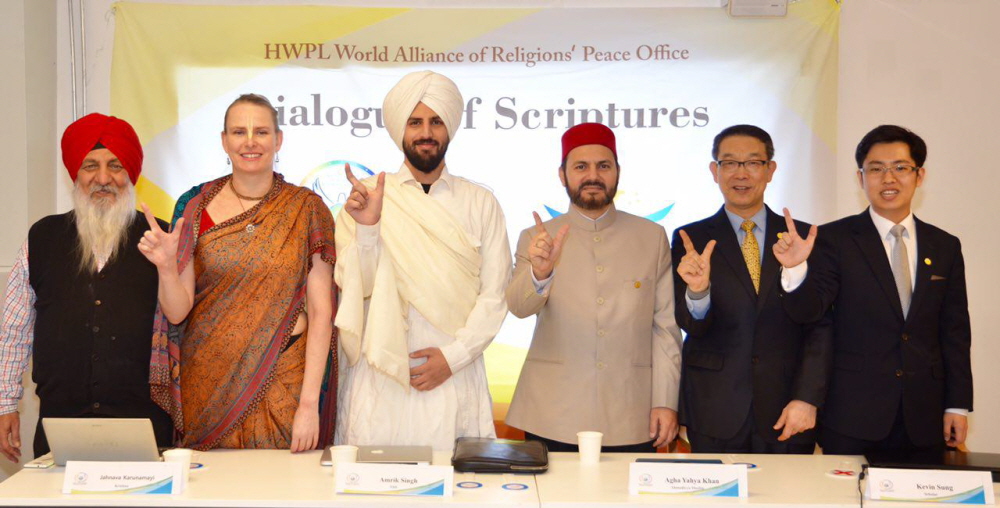 Just as news for peace starts to disseminate in Sweden, we anticipate world peace is not merely a remote goal. Religious leaders, who have earnest hearts for peace, gathered at the 1st Sweden Gothenburg WARP Office and discussed on the topic of ‘Peace According to the Scriptures.’ Let’s explore the responses to various questions from each representative of Islam, Krishna and Sikhism. 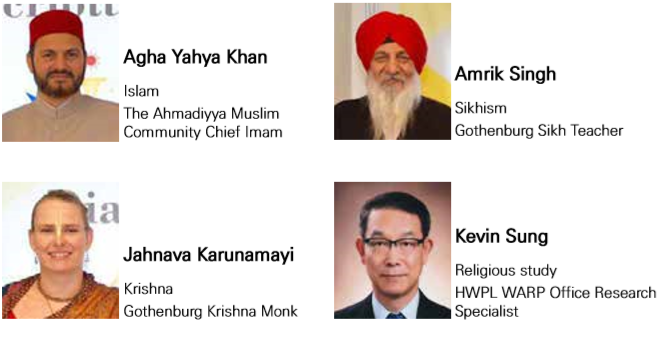 Does Your Scripture Have Records of When and How a Peaceful Nation Will Come?

“The Quran states that the peaceful nation will come when we achieve one nation, and accepting a common belief. And Quran calls upon all religion who have one belief, and that is the belief of God. All people come between us and upon Allah. The main conflict between religions is God, and it is a common ground to join hands.

Second this is achieved only through absolute justice in every moment of life. And we should act according to the justice and have righteousness and share the things of Allah. These two points demonstrate how there is a peaceful nation.”

And it is important for us to change our diet and sacrifice to the world and dedicate to God who is the most powerful. We all belong to him as he has different names of God, but it is the same no matter which religion we belong to.”

“We have to have peace within ourselves. If in a cup there is no peace then all you can do use it for is as a paper, but if you have peace in it, then you can pour and give it to someone else. Peace is vital and it is always throughout history.”

“Peace in Hinduism is that when God is within us, we realize that we are within him, so then peace will come. Buddhism helps people remove the confusion caused as a result of their ego by practicing the Noble Eightfold Path.

It describes that when people remove greed, peace and heaven will come, leading to the most peaceful world and heaven. Also, in the Islamic Quran it says that God leads those who follow him to a peaceful way, and from darkness to light.

In Matthew chapter 24 and the Book of Revelation of the Christian Bible, there are specific prophecies about the world of peace, which are recorded to be fulfilled at an appointed time. That time will be the last days, when Jesus Christ who shouted peace comes.

All religious scriptures have records about Peace. Both believers and non-believers in the world truly look forward to usher ina peaceful world. If religious leaders are at the forefront of collaborating and calling for peace, we may anticipate to live in that peaceful world, sooner.”

Each Religion Is Shouting for Peace but Why Haven’t Wars and Conflicts of the World Ended?

“Religion, and its principles and teachings, is love and there is no religion that teaches conflict. There are these things because there is misinterpretation and misunderstanding and is used only for their own good.

And every religious conflict will come to an end because the religious teachings are in concern as they have a strong bond with the Creator. Justice is being the guide and will manifest evil.”

“If I am an enemy of peace, we also need to transform ourselves in the heart. Almost everybody has souls and they are pure. Enemies, the enemies of God, make us to be exposed to bad things. True love is what we need and that is serving God because we are God’s children, and we can only control ourselves when we transform lust to love. God can purify us so we need this. And that is why peace is not achieved because we don’t practice it.”

“Religions vary, there will always be conflicts. We have to face each and every day, and it is about choice and what you do. So it is a matter of choice.”

“Hinduism or Buddhism say that because of people’s desire or anger wars and conflicts will not end. The Christian Bible says that with their lips people are seeking to perceive the will of the scripture and to find God, but their hearts are very far. These people attack and prosecute others, who go against their will, which may lead to conflict and war in society. If religious leaders are like this, then their followers who have been taught under them will also be like them, and so there will be no end to conflicts.”

The responses emphasized the importance of knowing the truth, the one that eradicates evil, within scripture in order to put an end to wars and conflicts. They also underlined that we have to change first if we hope for the world to change, regardless of which religion we belong to. We hope these written responses move the hearts of religious leaders throughout the world to actively pursue the work of peace through participating in WARP Offices.

What Is the Role of Religious Leaders in Achieving Peace?

“God is so powerful and religious leaders have to get out of the safe area and start thinking. We don’t understand, but we need to try and try to step forward and this is important, teach others. So we should find ourselves and also do a spiritual diet. We need to save the animals and have spiritual understandings. So I am thankful for this and this is great for peace.”

If we realize the will of the scriptures and put it into action then we will try to fill our hearts with the good knowledge. If you don’t know the will of religious scriptures, however, you will have faith that is being led by your own thinking. The role of religious leaders for world peace, firstly, is to always reflect themselves in the scriptures and check whether they are sharing the correct knowledge to their followers.”

A flower of peace will soon blossom in Sweden as religious leaders who participated in the WARP Offices clearly perceive their roles in bringing peace and put them into actions. Participants mutually agreed upon their needs and responsibilities to bring peace, they pledged to further participate in the Scripture dialogue through upcoming WARP Office meetings.