Skip to content
Previous
Next
Published On: January 19th, 2019

A Sketch of the Fourth Intercontinental WARP Office on “The Afterlife”

On December 8, HWPL held the fourth “2018 Intercontinental World Alliance of Religions’ Peace Office” to foster discussions among various religions on the theme of the afterlife. Attended by 8 religious leaders from 5 different religions, the event was broadcasted live via YouTube and attracted more than 2,100 viewers.

The Fourth Intercontinental WARP Office meeting was divided into two sessions. During the meeting, the moderators asked each religious panelist questions about the place people go after they die, the standard that determines a person’s afterlife, as well as about a judge who determines a person’s afterlife and others. The religious leaders provided explanations about heaven and hell, karma, reincarnation and paradise, according to their respective scriptures. The main questions were given to panelists prior to the meeting, so that they could prepare solid responses with references from their religion’s scriptures.

When the moderator addressed additional questions or asked questions gathered from audience members, however, the panelists were required to give answers in that moment based on their knowledge of the scriptures.

Main questions and responses by religion 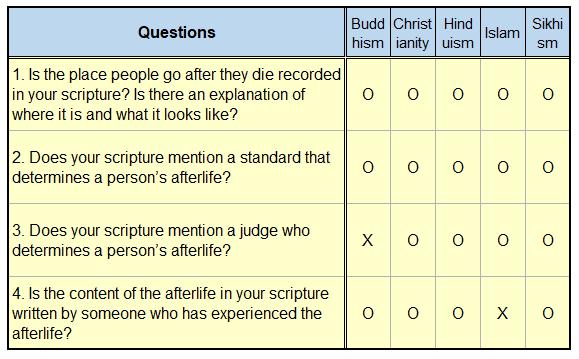 Also, the panelists from Islam responded with “X” to the question of whether the content of the afterlife is written by someone who has actually experienced the afterlife. As Imam Muhammad Husam Hassoon Najjar explained, “The only one who can speak about the afterlife is the Creator himself. No one can experience the afterlife and come back, so no one can give an account of it. It must be described by the one who created it. The Creator knows it; however, he does not have an experience of it because the afterlife is created for us, humans, and not for him.”Only the Buddhist panelists responded with “X” to the question of whether there is a judge who determines a person’s afterlife or not. Ven. Panninda, the Buddhist panelist, said “According to Buddhist scriptures, an individual’s own deeds determine the person’s afterlife. Our own actions determine our next existence. In addition, there is no judge for our afterlife or for our next existence, because we can create and direct our next existence with our mind and with ourselves.”

Mr. Bhupinder Singh noted “God is one, even though the names of religions are different, originally religion is the same by the one creator God. We are doing very meaningful work for going back to the origin of religion.”

The Intercontinental WARP Office is an effective platform to diversify participants and promote HWPL’s WARP Office project of scripture comparison. At the Intercontinental WARP Office meetings, the floor is open for audiences to ask questions to the religious leaders. People can also leave comments while watching the meeting live online. Then, the moderator gathers good questions and brings them to the discussion table, allowing exchanges to happen between religious leaders and the audience members. This contributes to enhancing people’s interest in scripture comparison, preventing them from having misunderstandings or discriminatory views towards certain religions that easily lead to hatred and religious extremism.

The goal of the HWPL WARP Office is to dismantle such prejudiced views and help people look for the truth by finding a trustworthy scripture through peaceful discussions and scripture comparison. As the moderator Marc Liborius explained during the Fourth Intercontinental WARP Office meeting, “There are still so many misunderstandings in the world about religions, which cause many wars and conflicts. That is the reason why we do the scripture comparison, to find out about the most trustworthy scripture among all the religious texts.”

HWPL’s WARP Office launched the Intercontinental WARP Office in the year of 2018 to further develop itself as a platform for religious peace. In the new year, religious leaders participating in the HWPL WARP Office will meet with civil society to discuss even more interesting and important themes.