Skip to content
Previous
Next
Published On: July 24th, 2019

A great number of wars stem from religious conflict, and the peace camp centered on awareness of these issues as well as HWPL’s vision for achieve world peace. Under the subheading, “HWPL Religious Youth Peace Camp for the Peaceful Unification of the Korean Peninsula,” the camp was held in South Korea which is the only still-divided nation in the world.

Beginning with the introduction session on the first morning, 22 youth participants joined Hyanggyo-stay at Ulsan Hyanggyo. Under the guidance of instructor Jeon Ok Sook, they tried on the traditional Korean clothes – the hanbok – took etiquette lessons, practiced a tea ceremony and played traditional folk games. Through various activities, they were reminded of the “culture of benevolence, righteousness, propriety and wisdom,” on which Korean traditions are based.

One participant, Park Ju Hee, said, “I came to this camp because I was curious about what religious peace camp is and I heard that this is a gathering of peace-loving people. I am having such a great time here, more than I expected, and it was meaningful to take an etiquette lesson while wearing hanbok.” 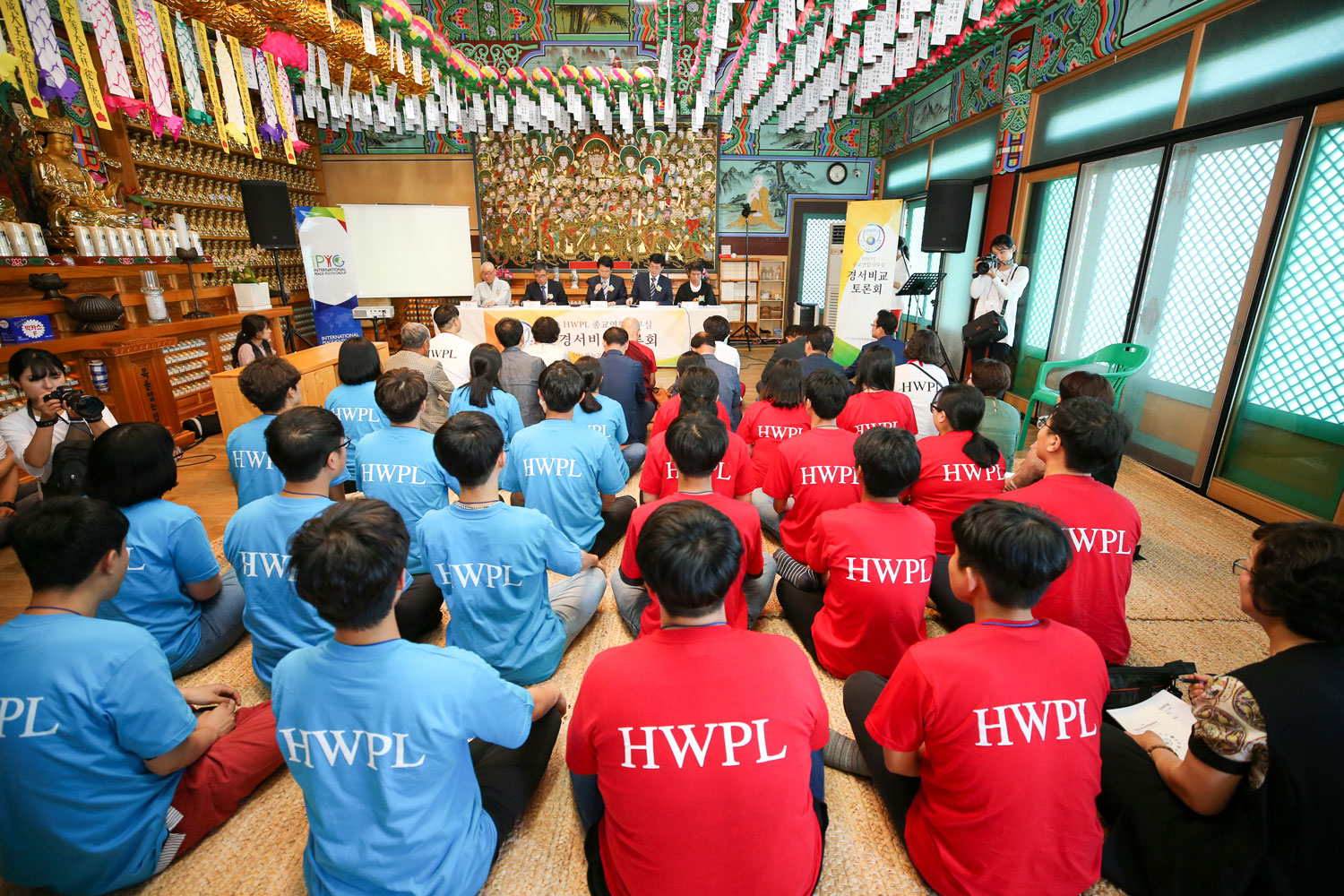 In the afternoon, participants moved to Shimkye Temple in Gyeongju to attend a WARP Office Comparison of Scripture, one of HWPL’s three major initiatives. Panels representing Buddhism, Christianity, Confucianism, and Cheondoism delivered speeches about peace. Discussing peace together in one place, they all agreed that religious leaders should take the lead in achieving peace.

The hope for peace deepened further in the evening where everyone took part in a peace performance shown through a media display while holding lanterns made by the participants. 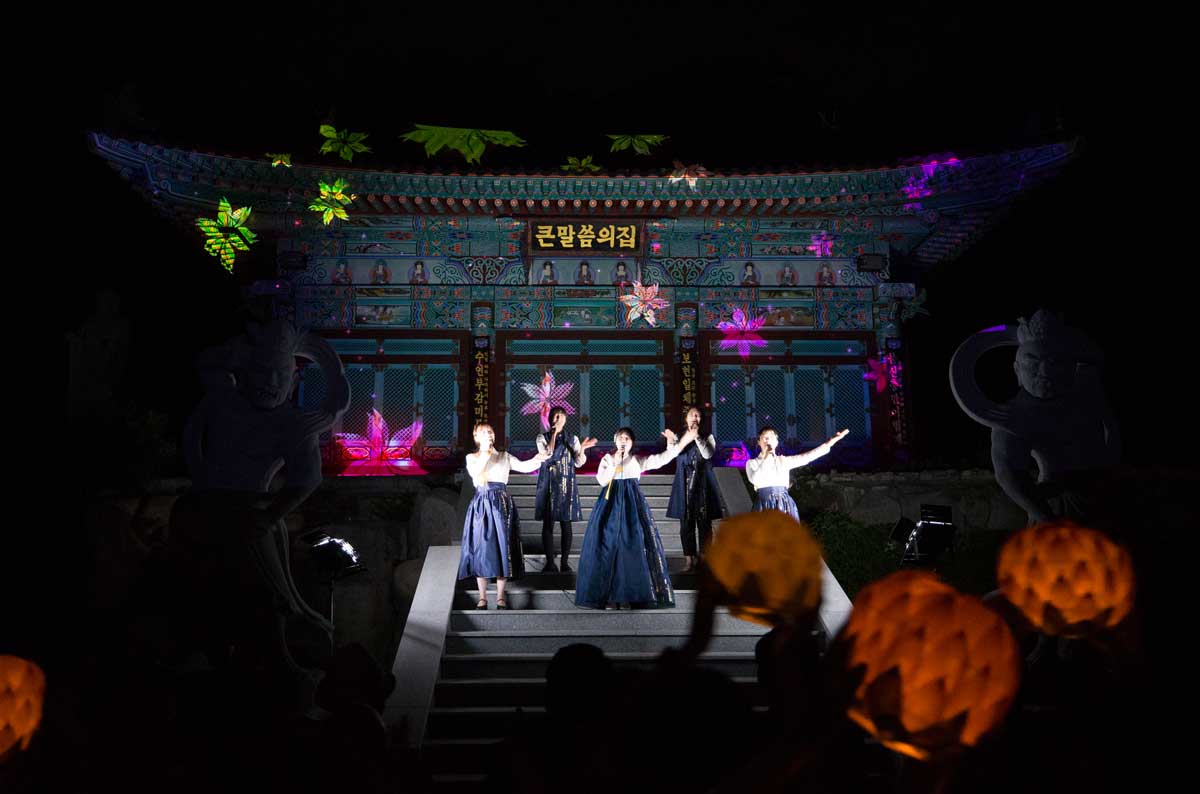 The next morning, the actual temple-stay activities began. A culture that once seemed so distant from them became clearer as the youth held a Buddhist service at 5am to refresh their hearts and minds and later learned more about Buddhist culture. Monk Geosan who was on the panel representing Buddhism at the WARP Office Comparison of Scriptures the day before gave lecture to them.

Later they participated in a program called “Mission Challenge to Achieve Unification.” Here, the youth were given quizzes based on the six main difficulties in achieving unification: that is distrust, difference in cultures, interference of neighboring countries, indifference, the 38th parallel, and prejudice. The activity allowed the youth to understand that peace will not be achieved merely by wishing and hoping but must be enacted to become reality. 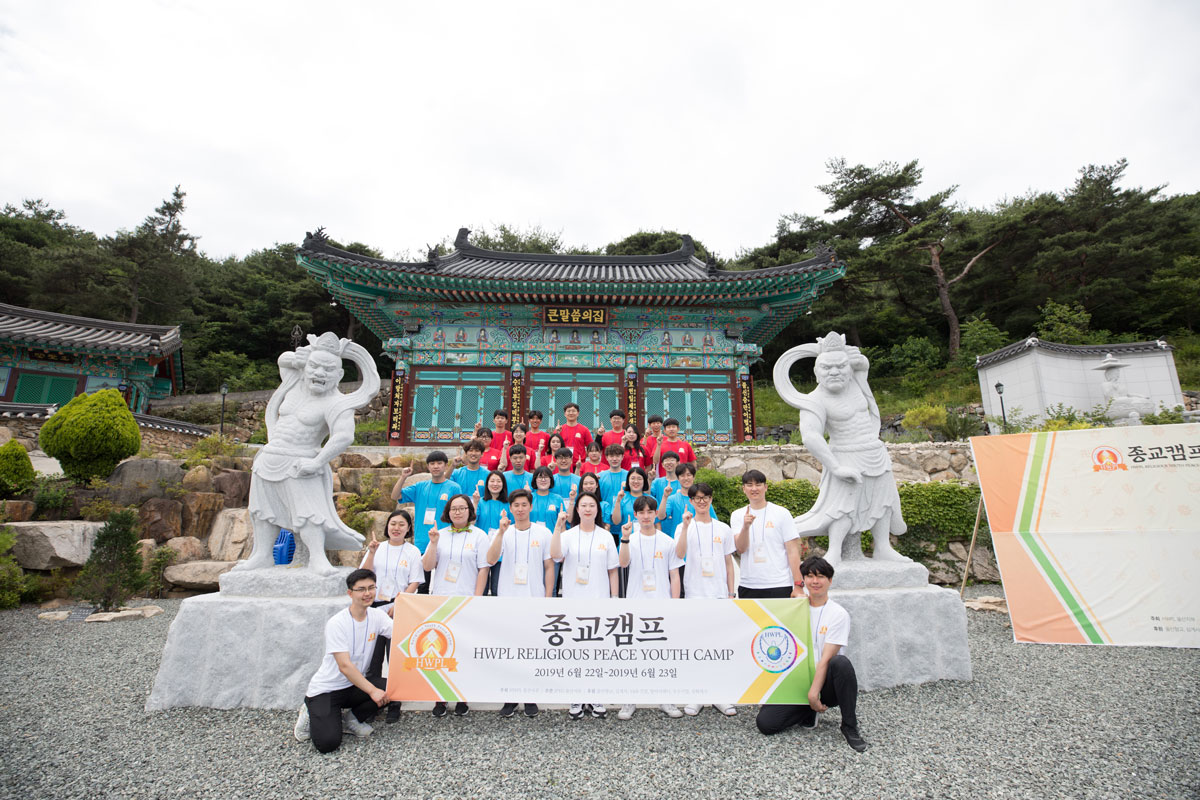 The peace camp ended with participants writing reflections on what they had felt and learned through the camp. The youth all said they could better understand the relationship between religion and peace, have deeper understanding of various religions, have a renewed hope for unification.

Jahye, Chief Monk of Shimkye Temple, stated, “I saw that people of all ages organized the event as one and raised their voice for peace together. I think peace is not something too far away. It was right here where we are at. I see a bright future through youth who are so polite and passionate.”

The officer of the Ulsan branch of HWPL stated, “The HWPL Religious Youth Peace Camp was held for the first time in Korea. I hope it will not stay as a one-time event but continue on with youth and citizens hoping for peace. I hope it allows religions to tear down the walls among them to understand each other, so that it can contribute to a peaceful unification of the Korean Peninsula.”