Skip to content
Previous
Next
Published On: April 29th, 2017

Testimony of a World of Peace from History – Cyrus Cylinder

In January, I had a short business trip to San Diego. Located near Mexico, with a history of migration and mild weather intermingling with each other, the city has been established as one of the most attractive places to travel in the area. In the southern part of the city there is a wide-open space called Balboa Park. As soon as I got out of the parking lot, I instantly recognized something bizarre about this park because there were houses standing along the paths.

Soon I was attracted to a monument standing in front of one of the houses built in the park, which stated that the name of the building was the House of Iran and the monument was a replica of one of the greatest discoveries in history. The object was bronze in color with a peculiar shape and seemed to have hidden messages of the past that connect to today. Later I came to know that it was called the Cyrus Cylinder.

Declaration of Human Rights? It was definitely not the one adopted by the UN in 1948, which is the one most tend to think of. Who was Cyrus the Great? Suddenly a flash of realization passed through my brain like lightning. In fact, I came to know Cyrus the Great because of the WARP Office Meetings of HWPL in South Korea when the religious scriptures were reviewed.

The monument’s inscription states the following:

“Cyrus the Great (585-529 BC), the Iranian emperor,defined the First Declaration of Human Rights on this cylinder.Cyrus is admired more as a liberator than a conqueror of his vast empire because of his respect for human rights and the humane treatment of those he ruled.”

My eyes widened with astonishment. I thought this must be the true inspiration given to all of us living in today’s world. Even though Cyrus the Great was a Zoroastrian, he has been highly respected by not only the Iranians (many of whom are Muslims) but also by many, regardless of their religious background, as a great leader who displayed faith in the value of tolerance towards both human dignity and religious freedom. 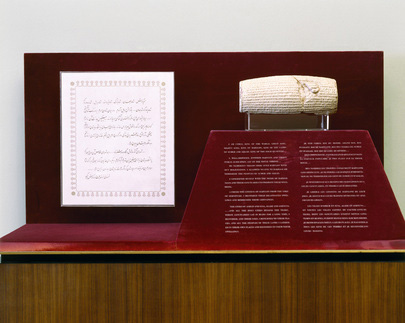 2,500 years ago, we already experienced a glimpse of the world we have dreamed of. The cylinder demonstrates that in the empire under Cyrus the Great, with its great territory and diverse peoples from different backgrounds, the principles of governance were based on a humanitarian approach.

Equality was settled to not discriminate people based on ethnicity. Freedom of religion was endorsed to not oppress people due to religion. The efforts of humanity in making this world a better place to live in peace did exist.

Now the efforts for a world of peace have been in progress on a much greater, even unprecedented, scale. Recalling the spirit of peace designated in the two Declarations of Human Rights (538 BC and 1948), the Declaration of Peace and Cessation of War (DPCW) drafted by HWPL appeals to the global community.

Religious scripture (the Bible), this relic from the past, the UN Declaration from the last century and the DPCW altogether become the evidence of a world of peace. Numerous youth and women around the world raise campaigns for the advocacy of an international law for peace through international cooperation.

HWPL calls for the media to stand at the forefront to spread the message of peace, which I am also currently working for. To those who know about HWPL and have the heart of love for humanity, I cordially ask for the same thing that the Chairman of HWPL says all the time.

“Let all of us become messengers of peace and leavethe legacy of peace to our future generations.”