Skip to content
Previous
Next
Published On: May 28th, 2015

Seoul, Republic of Korea– On May 25th 2015, in over 50 cities in 30 countries worldwide, 200,000 youths, women, and individuals from all walks of life simultaneously participated in the ‘2nd Annual Commemoration of the Declaration of World Peace’ and ‘International Peace Youth Group Walk Festival’, initiated in Seoul, Republic of Korea. The festival aims to commemorate the proclamation of the Declaration of World Peace and invite all human to join the work of peace, calling all youths, women, political, religious, and secular leaders to come together to leave the legacy of peaceful world to future generations. Hosted by Heavenly Culture, World Peace, Restoration of Light (“HWPL”) and co-organized by International Peace Youth Group (“IPYG”), HWPL’s affiliated organizations, the commemoration event and the walk festival were held not only in Seoul Olympic Park Peace Plaza, where the Declaration of World Peace was first presented on May 25th 2013, but also in major cities like Daejeon, Daegu, Busan, Gwangju, Jeonju, and Wonju. In overseas, just to mention a very few out of over 50 cities, the event took place in New York, San Francisco, and Berlin. The festival received much acclaim for extending its boundary of the practical peace activities by setting up a donation booth for Nepal Earthquake Relief and taking a time for moment of silence to honor and remember those lives lost in the recent disaster as well as wars throughout the history. 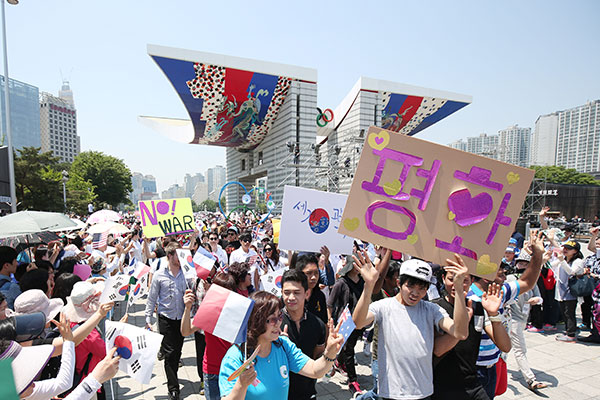 The commemoration event kicked off with watching a video which demonstrates astonishing achievements of Chairman Man Hee Lee of HWPL in the past two years in their endeavor to accomplish what is stated in the declaration. The video also presented the highlights of the World Peace Tour that Mr. Lee and HWPL’s peace delegation have undertaken in the past 3 years, visiting over 70 countries. The achievement of the World Alliance of Religions’ Peace (WARP) Summit was also showcased in the video. In addition, congratulatory speeches were delivered by high government officials and Ambassadors residing in Korea, followed by the congratulatory video of the heads of state, religious leaders, youth leaders, and international press who work with and support HWPL for the peace-building process. As for the last part of the program and the highlight of the commemoration, International Peace Youth Group Walk Festival was simultaneously launched around the world, gathering hearts of all participants yearning for world peace.

Mauricio Borges, an assistant labor attaché of Embassy of Timor-Leste to Republic of Korea, said, “Peace is not an award. You have to work for it. Everyone is defending what they think it’s right and most of time people don’t really want to have dialogue for peace. But through today’s festival at the Seoul Peace Plaza, I felt the atmosphere of unity toward peace spreading out to the whole world. I am very impressed by the event and it is now my hope that people will work with HWPL bringing a world of peace.”

Especially for this year, the walk festival, through the donation booth for Nepal Earthquake Relief, brought together the hearts of people that wish for peace and safety to be fully established on this earth. HWPL has always been an enthusiastic support for Nepal even prior to the recent disaster. Nepal Earthquake Relief booth titled “The Path of Brining Cheer to Nepal” promoted collective hearts of people to pray for and encourage the Nepalese community during the reconstruction work. Donations made during the event will be officially delivered to the nation through the Embassy of Nepal to Korea. 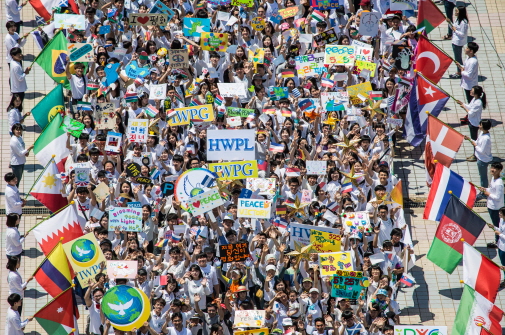 A Nepali student, Devananda Pokhrel, said, “I’ve felt that there is no labels of nationalities and religions in this place. All human beings have the right to live in a peaceful environment and HWPL has organized this program to achieve such cause. I’d like to thank the Chairman, the organizing committee, and all people who participated in this event. Everyone here helped the victims of Nepal Earthquake. We will never forget today.”

While President Barrack Obama recently proposed the national prayer day for permanent peace on Memorial Day, May 25th, well-known places like Carson City California, Mindanao Philippines, and Royal Bafokeng Nation South Africa have also designated May 25th as a day of HWPL Peace Day and built peace monuments. On January 24th 2014, Chairman Lee played a key role in ending a 40-year religious conflict in Mindanao, Philippines where it used to be the hotspot of Asia with death toll of over 120,000. He returned to Mindanao and participated in the 2nd Annual Commemoration of the Declaration of World Peace receiving much attention from the international community. On the day of commemoration, proclamation of January 24th as ‘HWPL’ day of Maguindanao was taken place with ‘the erection of 5m-tall peace monument’ at Buluan Gymnasium Hall where the signing of the peace agreement and unity of alliance of religions was held. People of Mindanao are spreading the message of peace by constructing Peace Park and unveiling ‘the Mindanao Peace Agreement Monument’ to commemorate the historical agreement ceremony, putting a period to the dispute. 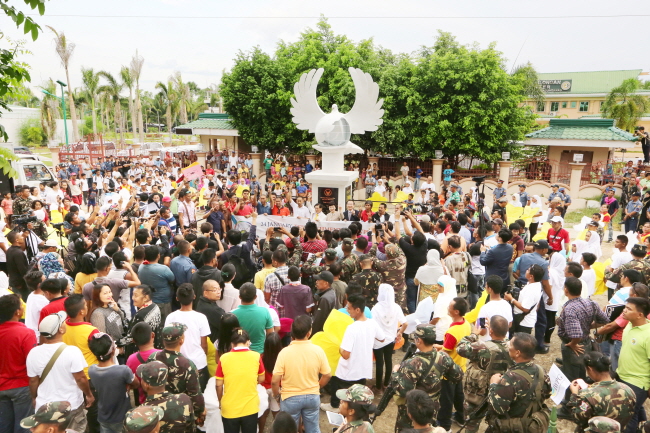 As a Korean War Veteran who experienced the pains of division of the country, Chairman Lee proclaimed the Declaration of World Peace at Seoul Olympic Park Peace Plaza on May 25th, 2013, for the first time in history. Since then, the declaration has become the standards and goals of HWPL peace initiatives and of the mindsets and mottos of people. The peace activities of HWPL around the world led to the success of the historical World Alliance of Religions’ Peace (WARP) Summit in Seoul, South Korea on September 17th – 18th. About 4,000 current and former presidents, political leaders, chief justices, religious leaders, youth and women group leaders came together and signed the peace agreement, making the splendid and unprecedented scene. Since the WARP Summit, many judges and law-makers are cooperating with and supporting HWPL to enact an international law for the cessation of war while religious leaders are actively gathering to establish WARP Office Meetings in their communities.