Skip to content
Previous
Next
Published On: September 19th, 2017

World women leaders gathered together for the end of war and the creation of world peace and called for the establishment of an international peace law.

This Forum was the location where around 350 women leaders from all over the world gathered together for the purpose of putting an end to war, as well as to support and promote the establishment of an international peace law. They also discussed successful cases of cooperation for the implementation of the Declaration of Peace and Cessation of War (DPCW) and future action plans to further advocate for its development into a legally binding international law. With this Forum, the international women’s peace network became stronger, overcoming the traditional boundaries of nationality, race, religion and social standing.

This Forum introduced the main initiatives and activities of IWPG that are being carried out in order to achieve peace, such as support for the ‘International Law Enactment’ , the establishment of ‘Peace Education’, and the project to ‘Plant Peace’. IWPG has also hosted a number of conferences and events in order to gain support for these projects and increase cooperation among women leaders and organizations worldwide and form an international peace network. In particular, the ‘Only Peace Conference’ that was held at the IWPG Korea headquarters in August and September 2017 attracted much positive attention and can be seen as one of the best examples of IWPG’s work.

The IWPG Peace Prize Award Ceremony was held as part of this year’s conference. This distinguished prize was awarded to 12 outstanding peace messengers who sincerely devoted their efforts to the various activities held to advocate for the establishment of HWPL’s international law. In addition, they also actively participated in the peace work done for the end of global war and the realization of world peace. Without the dedication of individuals such as these, the rapid growth of IWPG and support for the work of peace achieved this past year would not have been possible.

“Mother, give us peace.” Peace performance with children

During the final portion of this year’s forum, an amazing group of children, who are the true representatives of our dreams for the future, put on a special performance. Children’s songs, along with Michael Jackson’s “Heal the world”, comprised the background music as handwritten letters showing the children’s heart for peace were directly delivered to the global women who were gathered at the Forum. Also, the peace performance created by the mothers and children became the breathtaking scene of a truly peaceful world that all participants of the forum are hoping to establish in the near future.

The first speech presented at this year’s forum gave a sincere call to action for all women in attendance to take peace into their own hands and create the world of peace many are so desperately hoping for.

The core value of our IWPG is the heart of a mother because it is this heart that is the source of achieving world peace. Through the heart of a mother we continue to hold peace campaigns, call for conferences with members from all around the world and work for the legislation of the Declaration of Peace and Cessation of War with the assistance of UN women leaders.

To all honorable women in attendance, let’s put an end to war and leave peace as a legacy for future generations. Let us all support the implementation of an international law in order to protect our children from the suffering caused by violence and aggression and instead nurture them in an environment of peace. Peace education should start from within the family.

We, as mothers, should be the subjects of peace. When asked by our descendants what the most valuable thing was to us, we should become the mothers that can proudly say that it was our participation in the work of peace, which allowed them to inherit the world of peace. The heart of a mother is the hope of all mankind.

I promise you today that I will continue to be this type of proud mother for all people of the world and deliver this message of peace. 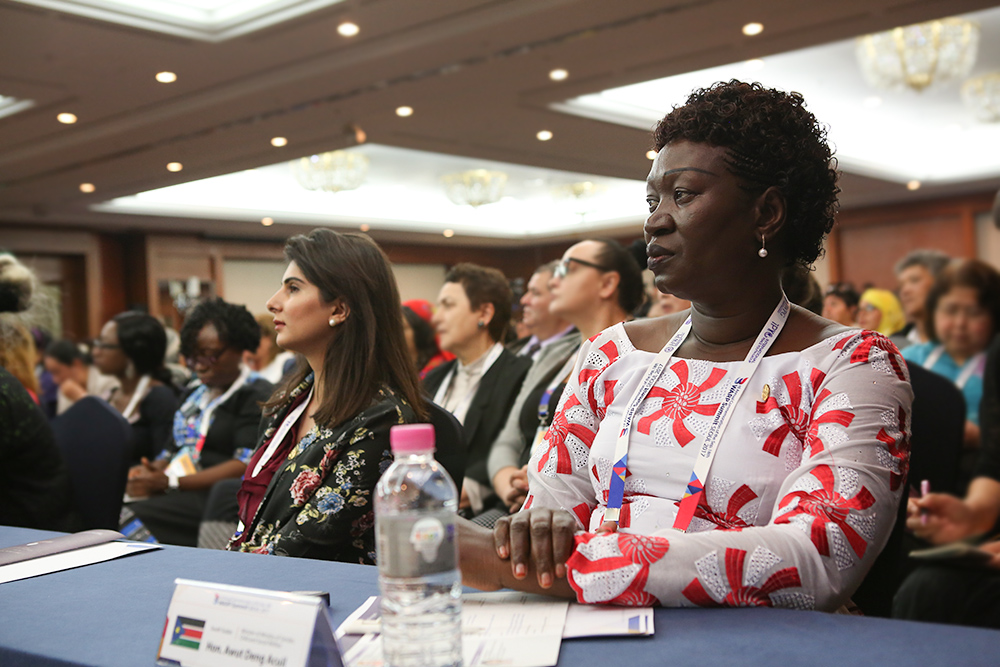 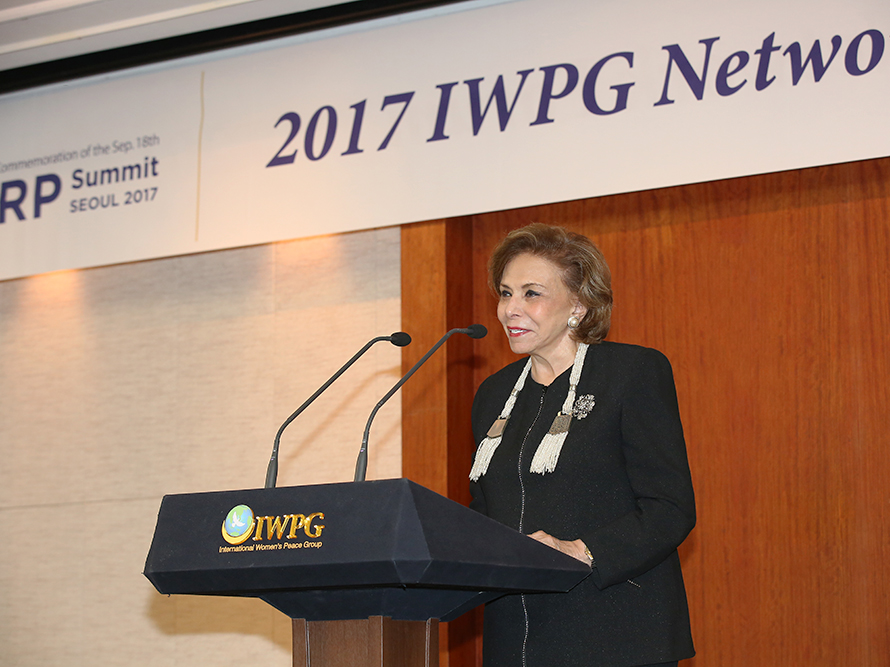 The next speaker, Dr. Merbet Tel-Avi, the President of the Arab Women’s Organization, said,“I am also proud to present the importance and peace activities by attending the 3rd annual commemoration of WARP Summit hosted by HWPL and IWPG. And my voice for women empowerment is to continue with IWPG until the human rights and peace are achieved.” 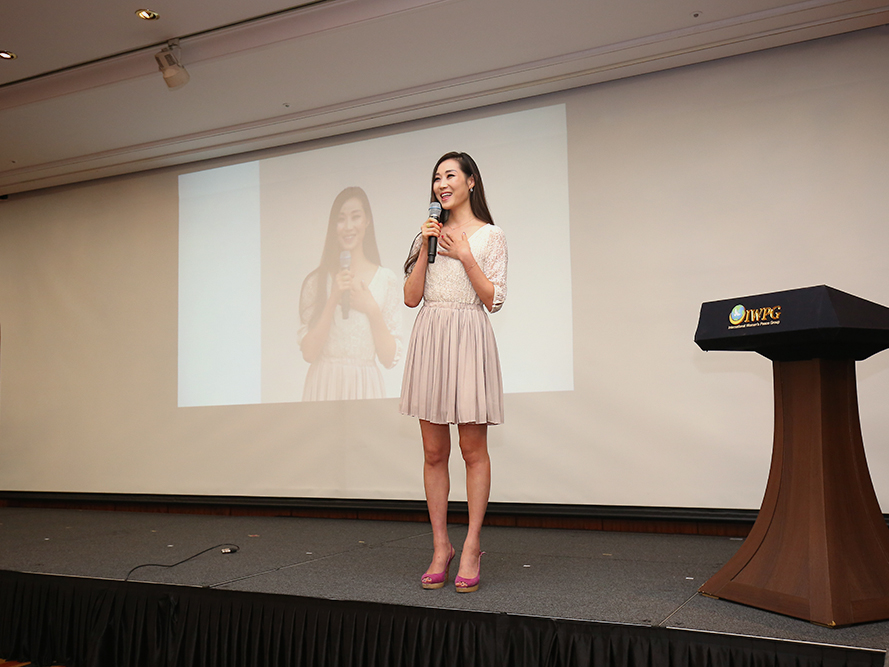 e of Women for Future Peace Together with the IWPG

Ms. Hannah Kim, the Former Chief of Staff and Communications Director to US Congressman Charles B. Rangel and Remember727 Founder said, “I’ve traveled many countries in six continents including China, Russia, and North Korea, meeting Korean War Veterans. They all said war is atrocious and women and youth are the scapegoats bearing the most sacrifice. A world free of war must be established through our hands.” 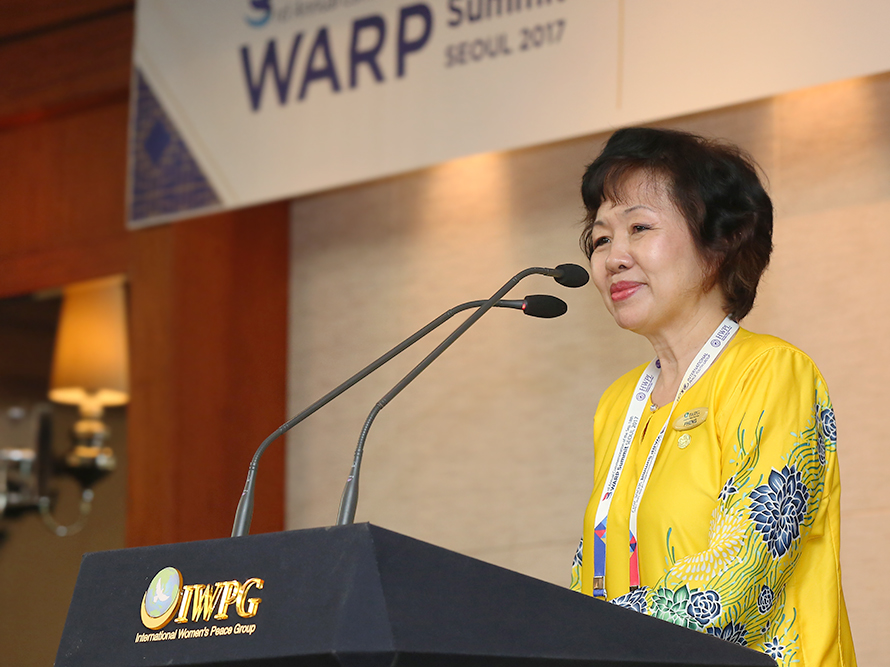 The final speaker, Ms. Sow Pheng Woo, the President of the Johor Women’s Federation, inspired all in attendance with her sincere passion and determination for peace. She stated,“we must not forget the great goals that people around the world pursue: justice, mutual respect, national sovereignty, education, and freedom of religion etc. These goals and principles are contained in the Declaration of Peace and Cessation of War, and we must inform the world”.

All of the global women leaders who were attending this Forum urged for the Declaration of Peace and Cessation of War to be presented to UN so that it can be established as a legally binding international law. Participants also pledged to actively work in each country as IWPG’s leaders and become one with 3.6 billion women worldwide, in order to pass on the world of peace as a legacy to future generations.

With the heart of a mother, these representatives of women across the globe showed their steadfast determination to put an end to the rampant wars and conflicts that have continuously plagued the international community throughout history. Cooperation is key, so as the global women’s peace network continues to grow, it can be seen that the era of peace is becoming closer than ever.