At the 3rd Annual Commemoration of the WARP Summit, a magnificent parade was held with the sincere aspiration to have the 10 articles and 38 clauses of the ‘Declaration of Peace and Cessation of War’ (DPCW) implemented in the near future. Peace, which is essential to all life on earth, is delivered through education and the spreading of a culture of peace to the youth and women. Through those who support peace, weapons are replaced with tools that benefit humanity. These messengers of peace hold firm to the vision that forceful invasion and war will no longer exist if the world comes together to do this work of peace.

The ultimate goal of the alliance of religions and the cessation of war through the legislation of the DPCW as a legally binding instrument in the UN exhibits the wholehearted hope of all HWPL peace messengers around the world. The finale of the parade beautifully demonstrated the wave of world peace that has finally reached the only divided nation in the world, the Republic of Korea. 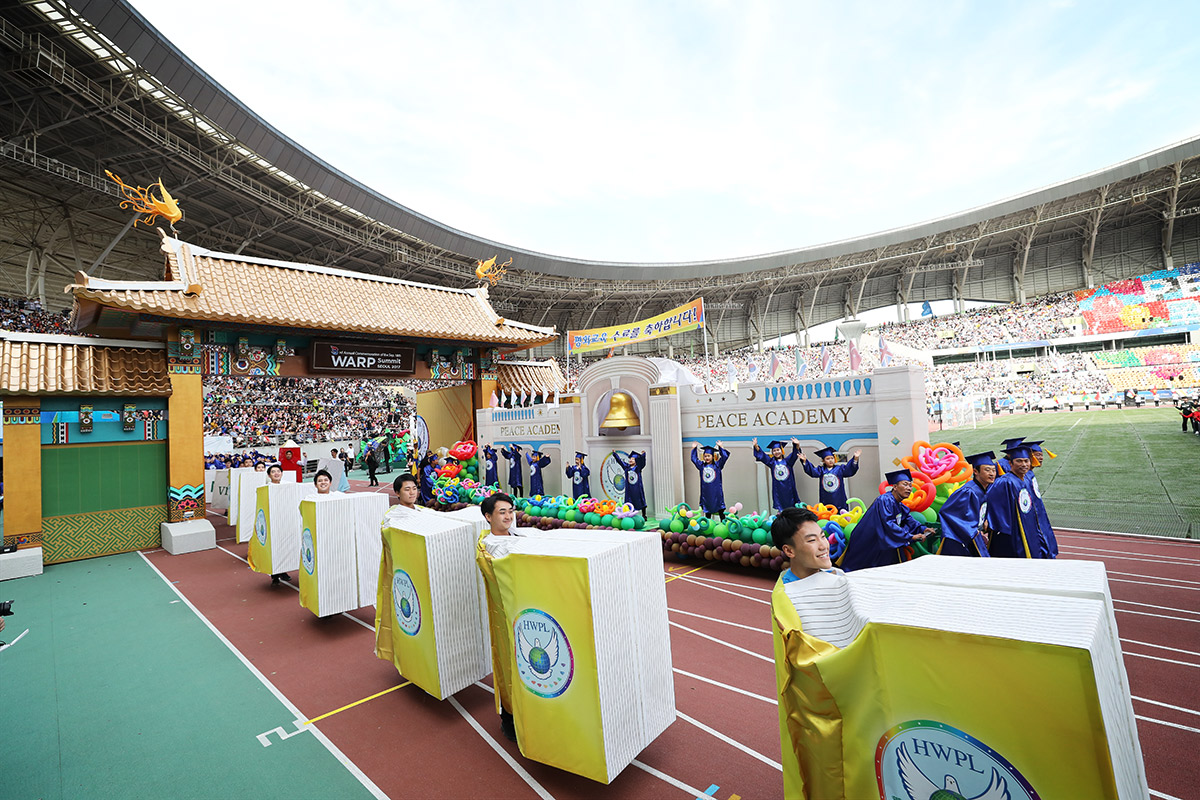 IWPG, with the motto ‘Peace on Earth with a Motherly Heart,’ is working to support peace by calling on the 3.6 billion women worldwide to come together as one. The organization is now in the progress of completing many peace works: from protecting children from war to supporting women’s rights to advocating peace education and the legislation of the DPCW. It is currently continuing to develop its network across the globe. 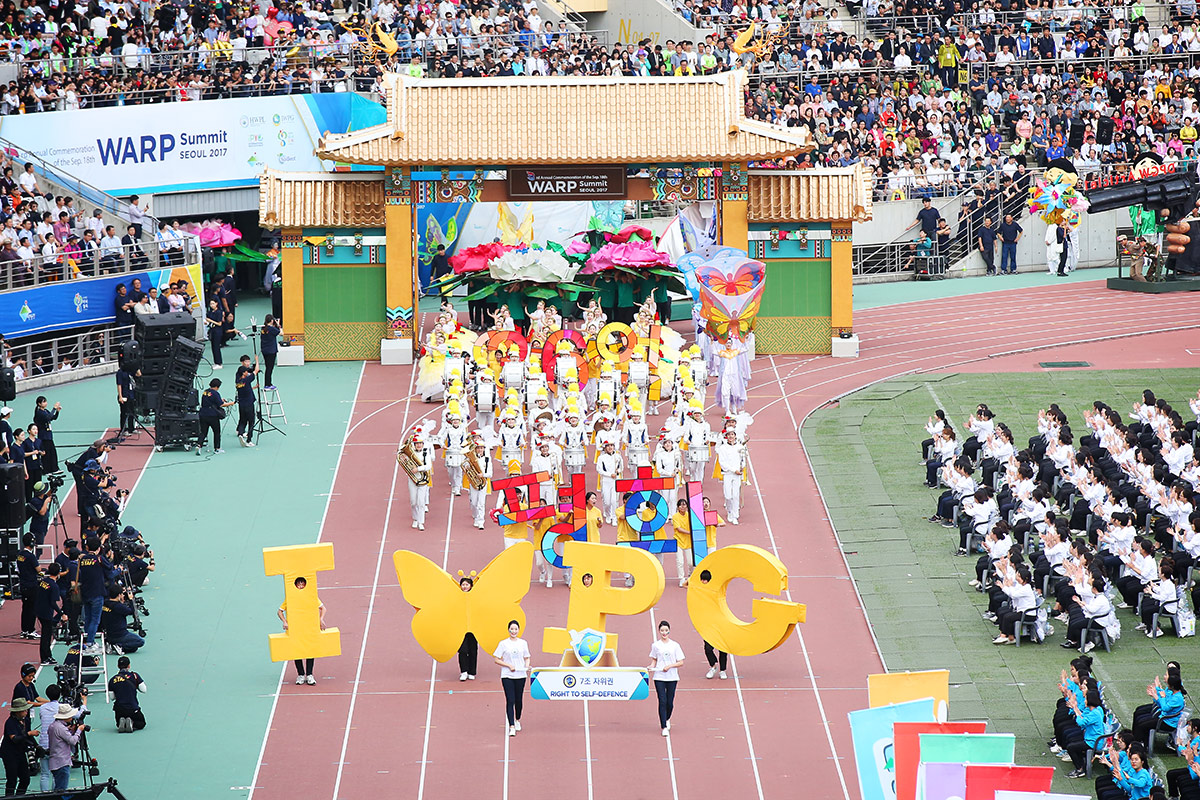 The Wing of HWPL! Peace Walk of the Youths of IPYG

Passionate and energetic youths, no longer left as the victims of war but now seen as the main figures of peace and cessation of war, have become one through IPYG. Holding the World Peace Walk event every year on the 25th of May to commemorate the Declaration of World Peace, the youths of IPYG have become exemplary world peace activists. As one of the wings of HWPL, the organization is engaging in various peace activities worldwide; such as, the peace walk movement, peace education, and advocating the legislation of the DPCW. 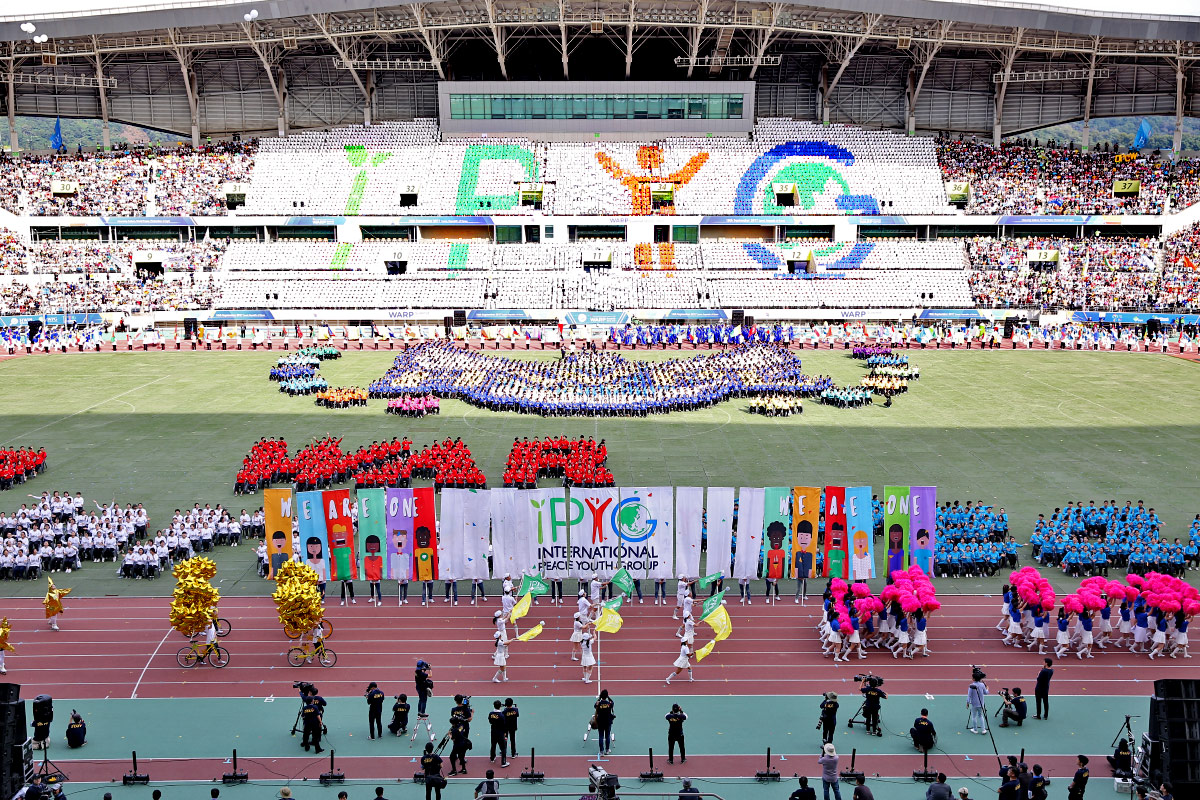 Article 1: Prohibition of the Use of Military force’ Tanks, from a weapon of war to a beneficial tool

A tank, representing the numerous military weapons in use today, entered into the stadium. However, it is not used as destructive weapon, but rather it sounds the trumpet of peace and is used as a beneficial tool for humanity that can be used for agriculture and construction. This demonstrates the future that must become a reality for all people. Each country ought to support and work together for the development and legislation of the DPCW into an international instrument that has the legally-binding power to prohibit the manufacturing of weapons and invasion through military force. 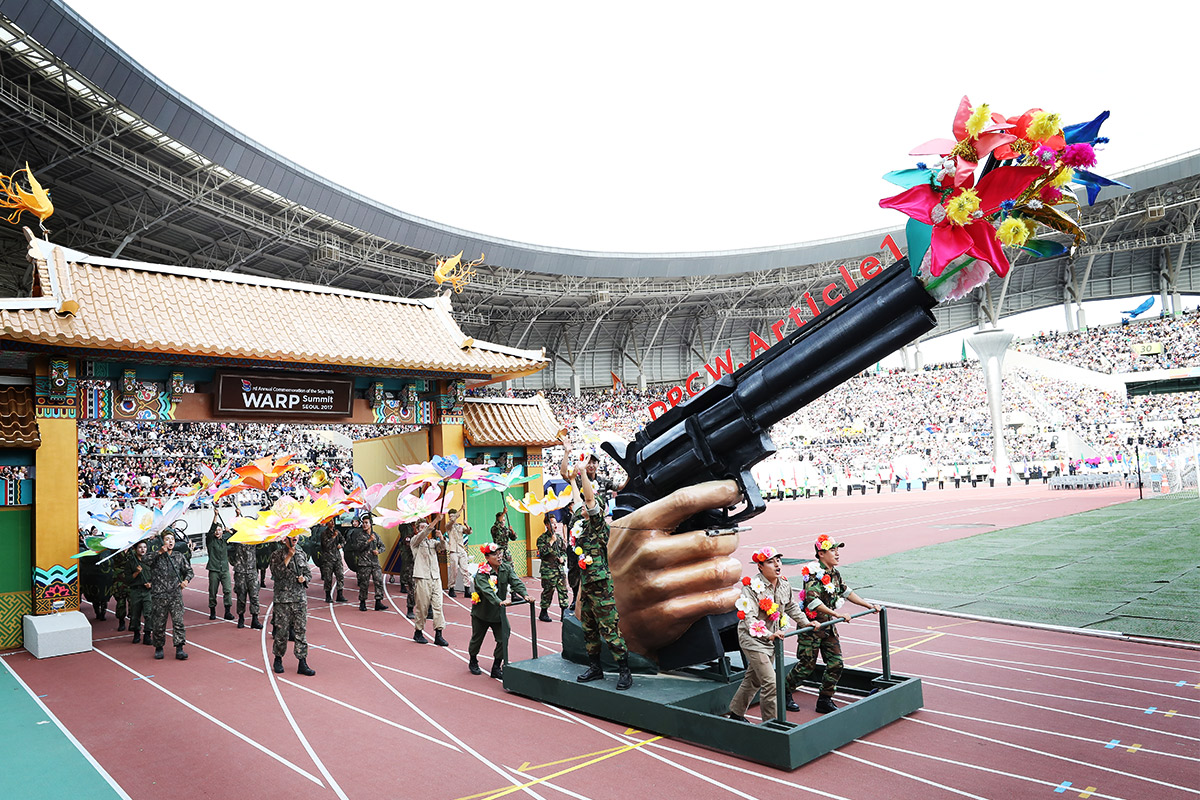 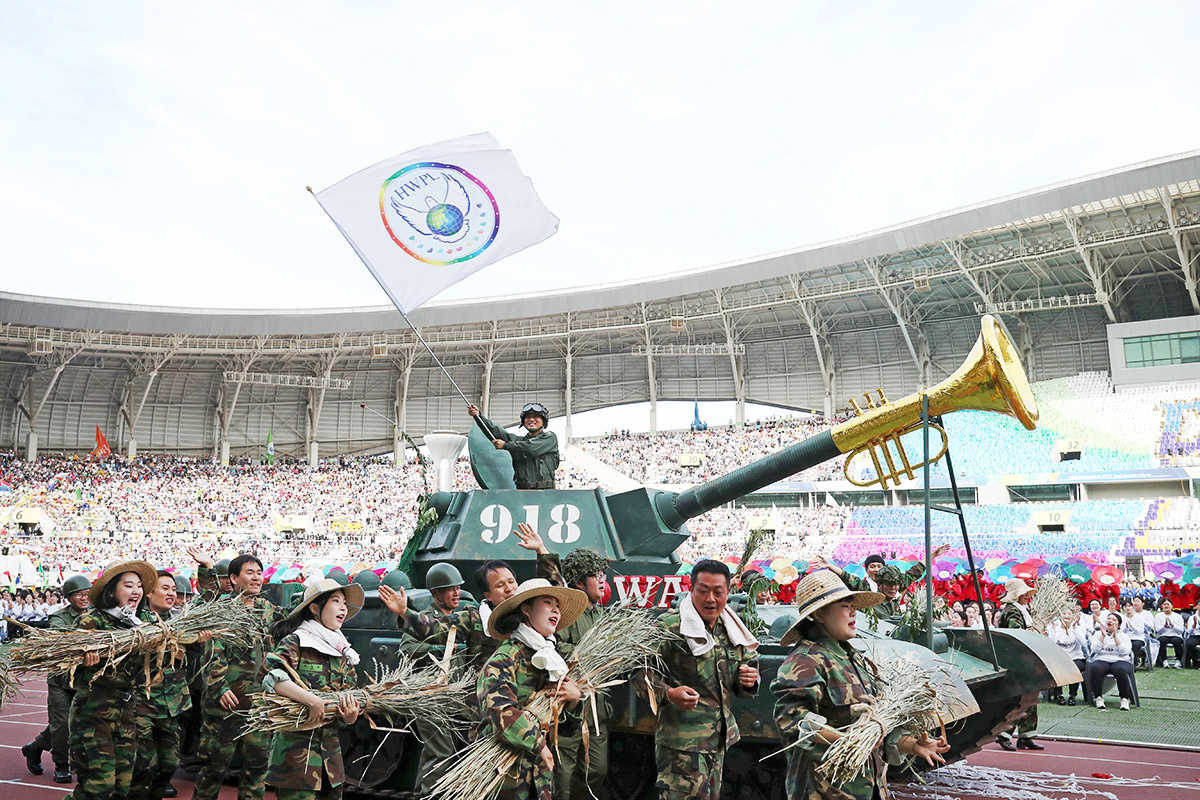 Article 6 “Resolving Conflicts”: Legislation of the DPCW as an International Law

Everyone around the world, including political leaders, will agree to the legislation of the DPCW’s 10 articles and 38 clauses. After the DPCW attains legally-binding power as an official international instrument within the UN and when all countries take responsibility to abide by it as law, the legacy of peace is sure to be passed down to future generations. 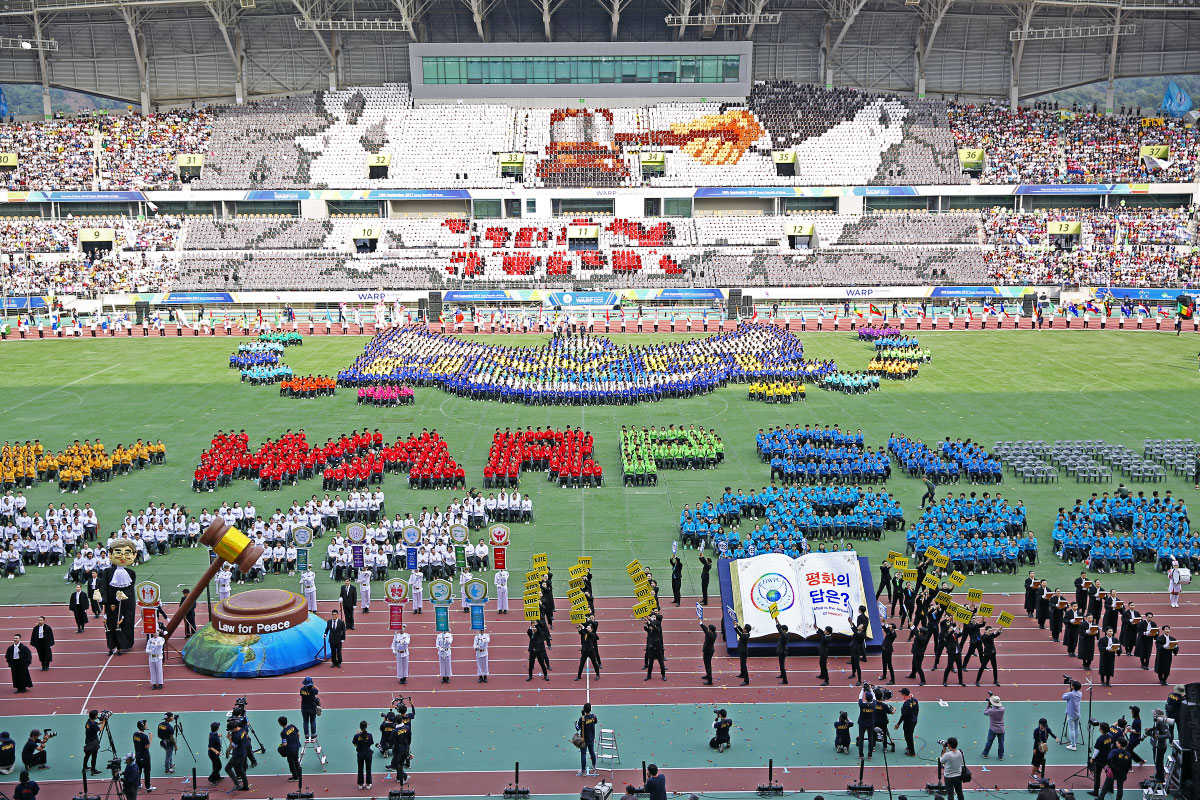 The Key to the Unification of Peace

The Korean Peninsula has been divided at the DMZ since the Korean War in 1950. The hope for unification and peace in Korea is explicit in the ‘Declaration of the Unification of Korea’. Koreans have greatly longed for the day to come when a unification-train runs from Busan in the South to Pyeong-yang in the North alongside the cheers of the many soldiers.

‘Peace is achieved when we all work together. Let us join in the work for peace’. HWPL’s spirit of peace, which transcends national borders, ethnicity, and religion, is to be spread to every individual on earth.