Skip to content
Previous
Next
Published On: September 20th, 2018

“We must always remember the great power that the media has to promote war, just as it has to promote peace.
Today’s wars no longer occur in isolation within a state.
Whether it’s terrorism or a refugee crisis it is truly a global problem,
and for this reason the solution must also be global.” 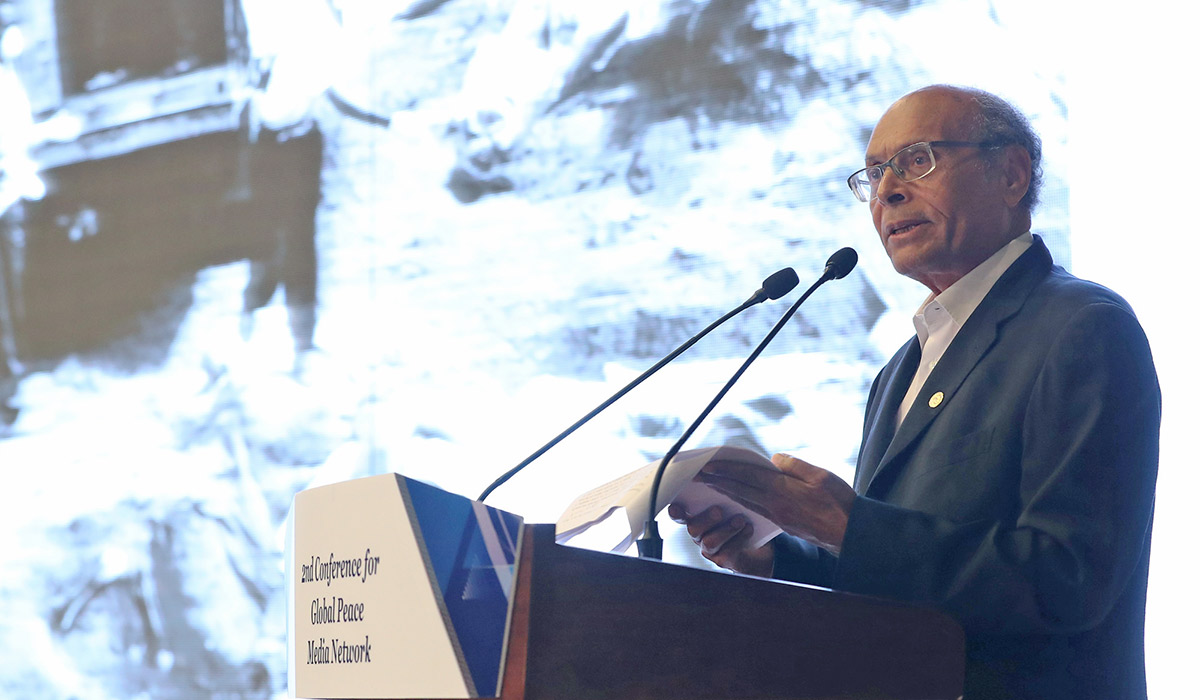 H.E. Dr. Moncef Marzouki, the Former President of Tunisia who is working as a human rights activist in pursuit of the values of peace in the midst of a whirlpool of violence and conflict, opened ‘The 2nd Conference for Global Peace Media Network’ by emphasizing the important role of the press in achieving peace. He stated, “Fortunately, the media is now playing an increasingly decisive role in the fight for peace and human rights. Today there is a new mission. In the face of the surge of hatred, rumors and false information that infect social networks, only honest and serious journalists are the guarantors of the truth, which is the essential condition for peace in [global citizens’] hearts and minds.” In addition, he stressed that the media has a responsibility for protecting human rights and maintaining sustainable peace.

A total of 67 journalists from 60 media outlets in 30 countries participated in this year’s conference. Participants collectively created plans for the qualitative and quantitative expansion of the reports of peace activities in countries all around the world as compared to the previous year. They also had time to discuss how journalists can cooperate and actively participate in the “Peace Initiative” platform. 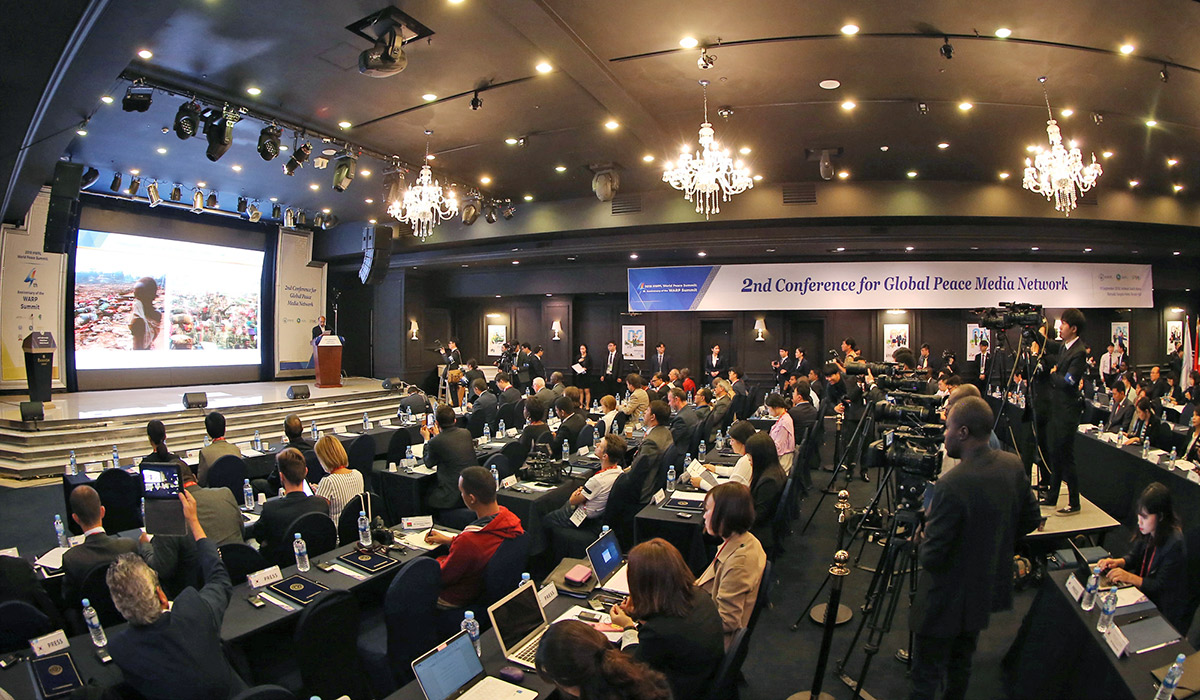 Journalists in attendance once again were reminded of the importance of the “Peace Initiative” platform. They also had the opportunity to reevaluate the potential positive impact it could have on the world if journalists and media outlets came together and reported in an unbiased manner regarding the reality of ongoing conflicts around the world, human rights issues and religious suppression.

Bishop Thomas Dabre, Bishop of Poona Diocese, who has been a life-long promoter of peace and harmony among religions and peoples, also gave a presentation explaining, “Today there is a lot of fake news in the media. This encourages tensions among people and communities. Such actions must be stopped.” He then continued, “Please remember that your unbiased and quick broadcasting have revealed the truth and corrected religions, culture and society. Journalists and all the workers in the media should reveal the reality of religions without a biased or prejudiced opinion. This will hasten the finding of a solution to the problem of disputes between religions.” He actively appealed to journalists to produce objective and truthful news, especially regarding religion and culture. 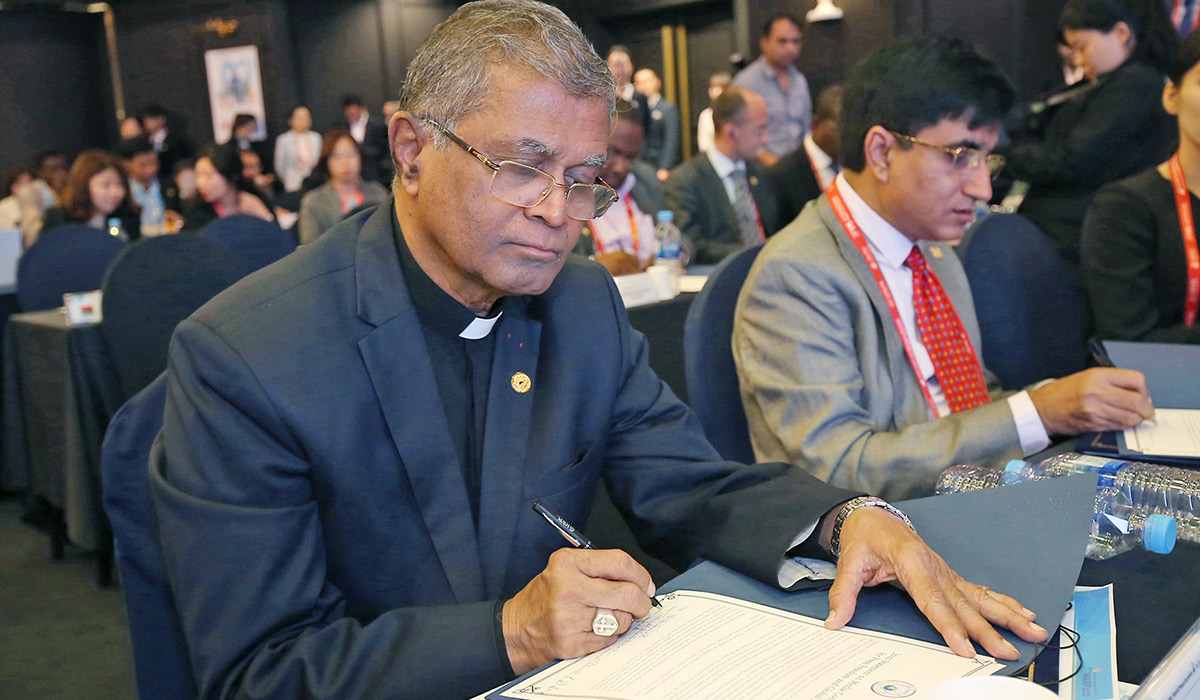 During the conference some of the tragic cases of coercive conversion that occurred this year in South Korea were also introduced through two youths in their 20s, who now belong to ‘Human Rights Association for Victims of Coercive Conversion Programs’ (HAC).

Ms. Jessica Kim, Coordinator of the International Press Department of HWPL’s Western Busan Branch, explained her experience as a victim of coercive conversion. She stated, “In South Korea, a country that proclaims freedom of religion, the coercive conversion programs involve crimes that deviate from the purpose of religion and lead to domestic violence, violations of human rights and even death. According to HAC, most of the illegal activities, such as kidnapping, are carried out by the family, who are instructed by the pastors who hide behind them so that they cannot be punished by the law.” Fortunately, this tragic incident was made known to the world’s religious leaders and faith communities through media reports made in each country, and now the entire global community is condemning such atrocities. The journalists in attendance listened intently to the various aspects of these cases, including the worsening condition of human rights issues and religions oppression in the present era.

Following his participation in last year’s event, Mr. Nazeeb Sulayman Ibraheem, Manager Programs of Globe FM-FRCN Radio in Nigeria, attended the 4th Annual Commemorative Summit in order to cover all of the events. He stated, “As journalists, our power is enormous. Since information is power, the media has the power and the tools to distribute knowledge. Since the public believes in the words of the media, the press must work only according to the “truth” in order to remain reliable. This is our driving force,” emphasizing the importance of providing the public with responsible journalism.

Mr. MD Zahidul Islam, Executive Producer (News) of Bangladesh TV (BTV), explained about his experiences at the ‘HWPL Press Forum’ held in his home country of Bangladesh. “We established an HWPL Media Forum involving leading journalists from both print and electronic media in Bangladesh. It was unanimously decided that the forum members would play a critical role in promoting the DPCW through the tool of the media in order to advocate for its adoption in their respective parliaments. If the media succeeds in its vital role of advocating for the DPCW in a particular society, then the positive public opinion would lead to a national consensus for adopting the DPCW as a means of restoring peace. This is a logical sequence. I firmly agree with the method of HWPL for putting an end to conflict and achieving peace.” 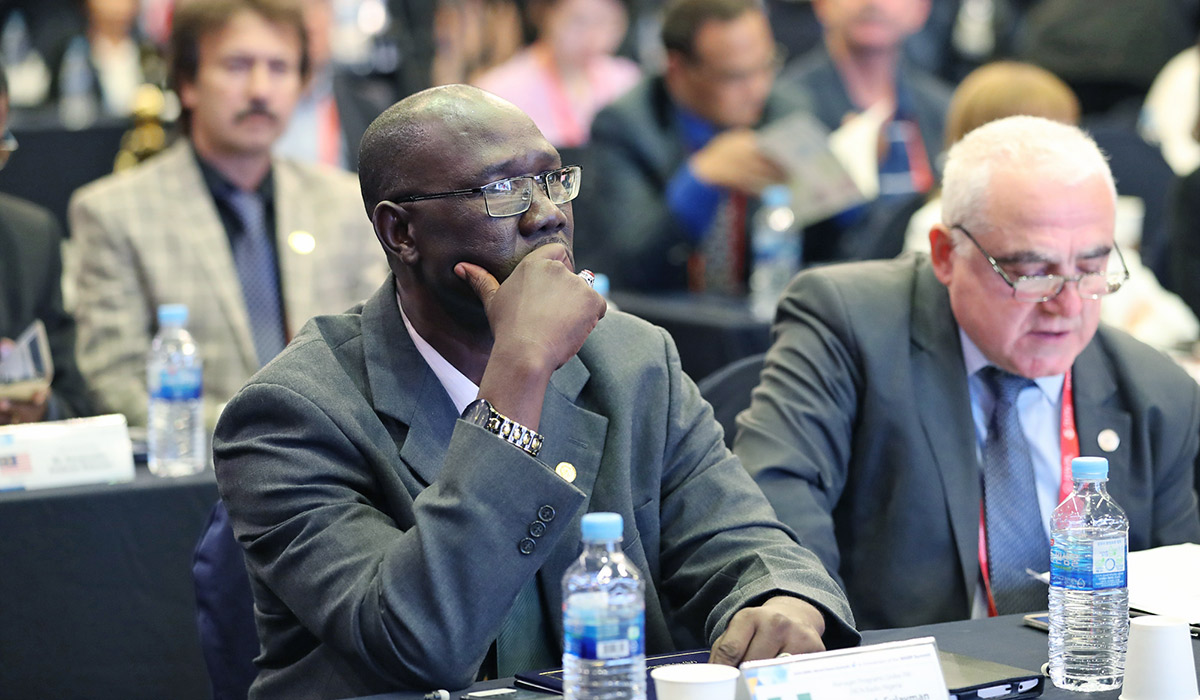 He also emphasized the importance of the international press community proposed at this conference and that establishing an international journalist peace network would allow members to submit their own contributions and exchange media reports. This in turn would greatly strengthen the coordinated peace campaign throughout the world.
Witnessing the horrors of war while serving as a war correspondent Mr. Avtandil Otinashvili, Editor in Chief of Newsday said, “10 years have passed since the Russia-Georgia war and the EU-mediated 12 August 2008 Ceasefire Agreement, but this has been simply ignored despite constant calls from the international community. This continues to hinder the establishment of security arrangements in the Abkhazia and Tskhinvali regions of Georgia.”

Lastly Mr. Ian Seo, Affiliation Chief Manager of the International Press Department of HWPL HQ, emphasized, “The ultimate goal of the DPCW is to create a firm foundation of law that binds every citizen and nation together, which has never existed on this planet until now.”

He then continued, “This kind of use of force makes it more difficult to resolve conflicts and establish peace and security in that region. Therefore, we need a strong legal instrument such as Article 1 of the DPCW. I fully agree with the principles of this declaration, since there is no alternative to peace negotiations. We can approach the resolution of such complex problems step by step through a legal instrument based on the principles of the DPCW.”

He also gave his heartfelt support for the initiative, stating, “In this context, I am glad that HWPL and journalists from different countries considered the need to create a “Global Peace Media Network” in order to not only inform the public about the existence of conflicts, but also to outline ways to resolve them.” We are confident that peaceinitiative.net will become the platform that will prepare and disseminate information on the subject of peace, which, in turn, will contribute to establishing peace across the globe.

He explained “There has only been one same answer from Chairman Lee regarding all the conflicts around the globe. It is a person with the spirit of peace. The United Nations, the DPCW, international cooperation, and the participation of civil society are all necessary, but it is the people who are at the center of these instruments. We have come to realize that the collective strength of each person’s will creates the era of peace, and that the spirit of peace we want to achieve is the driving force to make our world one under the title of peace. Many journalists came to say that it is their mission to make a world of peace by developing this spirit through spreading the message of peace to the world. The very result after a series of consultations is the “Peace Initiative” as you can see right now.”

He also explained, “‘Peace Initiative’ is a platform for journalists from different countries to spread the news of peace throughout the world. As a teaching material to understand peace, as a seed to be planted in every part of the world, your will and desire for peace is the very result of what we can and must do for our present and future generations,” expressing the desire for everyone to become a messenger of peace and deliver the news of peace to all corners of the globe. 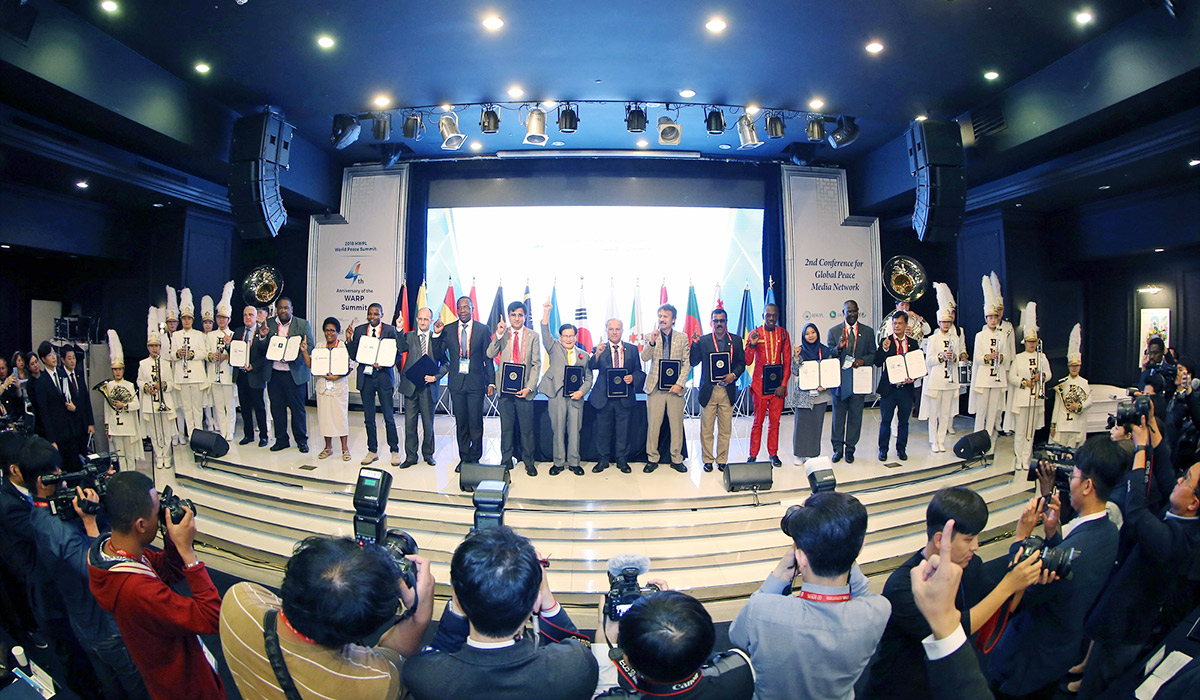 The signing of a Joint Statement as well as the MOU signing ceremony between HWPL and 13 supporting media outlets followed the presentations.
After signing the MOU, Chairman Lee pleaded earnestly to those in attendance, “Achieving peace and cessation of war is an impossible task without media professionals like yourselves because we cannot meet everyone in person to deliver this message. The media and press must constantly report on the news of peace-building efforts to make a peaceful society. Let us achieve our goal of peace by doing it. Rather than waiting for tomorrow to come, let us bring forth tomorrow and work steadily to accomplish our goal. I trust each and every reporter here to hold the media accountable.”

First, the signing ceremony of the Joint Statement for the freedom of the press and world peace was held. The core contents of the Joint Statement included the commitment of the press to accurately report the reality of the ongoing conflicts around the world and promote the protection of basic human rights. In addition, it was promised that there would be objective coverage of religions and peace, so that the media would be the first to recognize and acknowledge the existence of religious extremism, terrorism and anti-humanitarian atrocities, such as the case of the recent death due to coercive conversion programs run by the Christian Council of Korea, that threaten the entire global community in today’s time, rather than remaining silent about the issues. This would result in the spread of peace journalism, which would call on the international community to cooperatively resolve such crimes and seek solutions for the further development of peace.

Based on what was discussed in ‘The 2nd Conference for Global Peace Media Network’, we hope that journalists across the globe will cooperate more closely with one another in order to achieve the realization of a world of peace and allow the healing winds of peace to blow throughout the world that is now plagued by war and conflict. 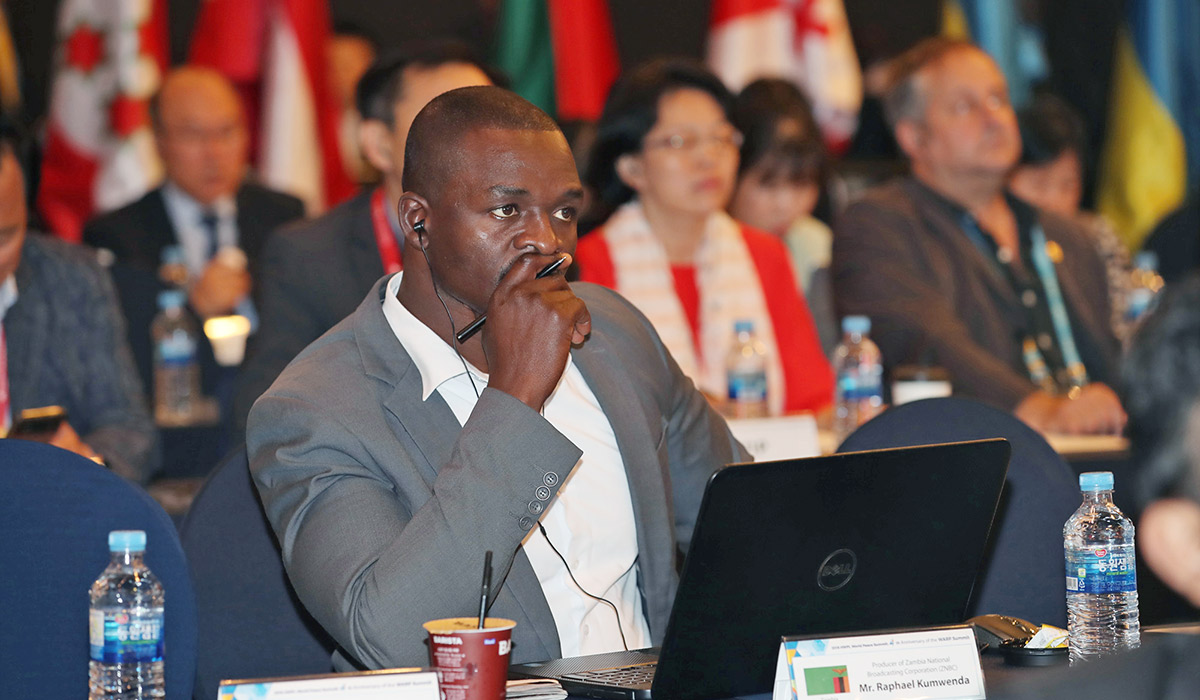