Skip to content
Previous
Next
Published On: February 28th, 2016 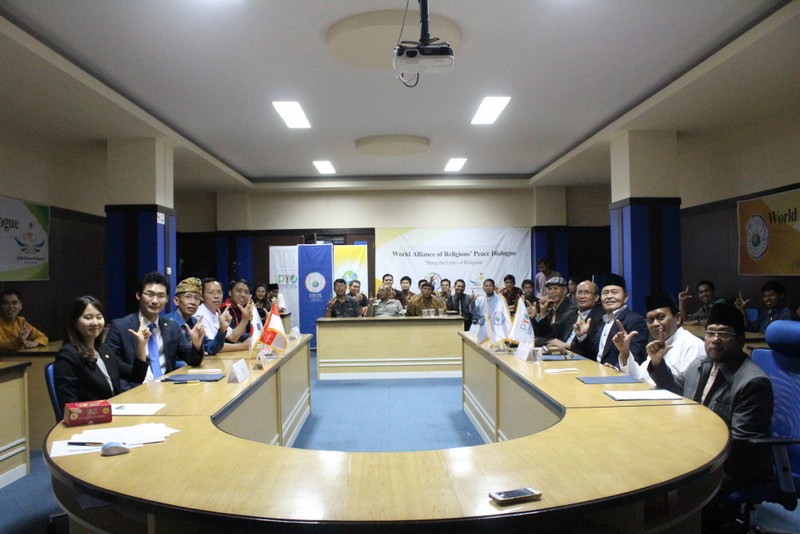 On February 26th 2016, the 2nd WARP Office meeting was successfully held in Makassar, Indonesia. The event was divided into two parts; the first part consisted of a pledge ceremony, during which the participating religious leaders promised to take seriously their responsibility in attending WARP Office meetings.

They all pledged this out of their sincere heart for attaining inter-religious understanding through the WARP Offices. The second part of the event provided religious leaders, representing six different religions, a time for heated discussions on “Do Religious People Need the Holy Scriptures?” All responses were made based on their respective religious scriptures. 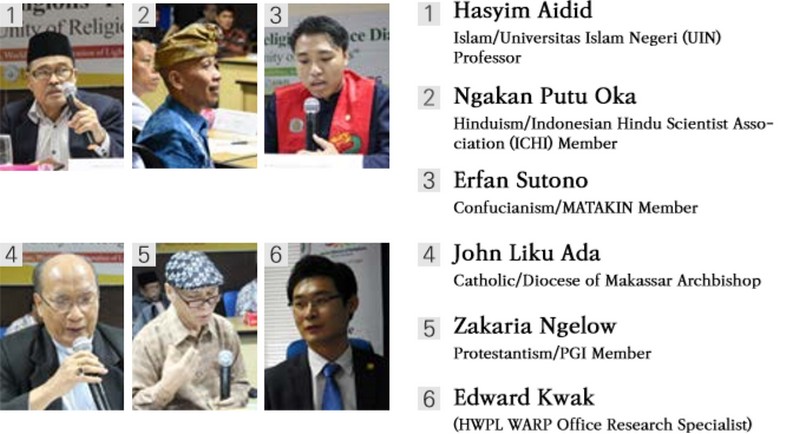 [1] Does Your Scripture Have Records About Why God Provided the Scriptures?

Hasyim Aidid (Islam/Universitas Islam Negeri (UIN) Professor)| The reasons why God gave us the Holy Scripture can be classified two ways. First is for the ‘guidance’ of mankind. (Quran Al-Baqarah 2) And secondly for clear judgement between right and wrong. (Quran Al-Baqarah 185)

Erfan Sutono (Confucianism/ MATAKIN Member)| Through the doctrine of Zhong Yong, the Word of God (God Almighty) is named ‘True Character.’ A life following the True Character is called taking the ‘Holy Way’. Taking the guidance of the Holy Way is called religion. Religion leads mankind to follow the path of the sacred character of the Truth according to the ‘Word of Tian’. Tian/God sent a ‘Prophet’ to convey the teachings and the ‘word of Tian’ through revelation.

John Liku Ada (Catholic/Diocese of Makassar Archbishop)| In Hebrew 1:1~2, God has spoken to us by a Son, Jesus, through whom also He created the world. And in John 1:1~3, in the ‘beginning’ was ‘the Word’, and the Word was with God, and the Word was God. All things were made through him, and further, the Word became flesh and dwelt among us, it is the Only Son. And also the same Gospel of John tells us why God gave us His Word, who became a living person: “God so loved the world that he gave his only Son, that whoever believes in him should not perish but have eternal life. For God sent the Son into the world, not to condemn the world, but that the world might be saved through him” (John 3:16~17)

Zakaria Ngelow (Protestantism/PGI Member)| The Bible is given to teach us the love of God in Jesus Christ who died on the cross to redeem our sins, and lead us by the Holy Spirit to live according to God’s will. The Bible teaches us to love our neighbor, to forgive and make peace in conflict, to carry out justice for the oppressed and the marginalized, and to care for God’s creation. In short, the Bible is given to know the truth of the Gospel and to be the compass for our life. (2 Timothy 3:15, Romans 15:4, James 2:8, Deuteronomy 6:5, Leviticus 19:18, Psalm 85:8)

Edward Kwak (HWPL WARP Office Research Specialist)| Scripture is a record of God’s will, and getting to know the scripture is Theology. Within the Holy Bible of Protestantism and Catholic, Isaiah 55:8~9 says there are differences between God’s thought and people’s thought. So we can’t know the thought of God with people’s effort, but we can know God’s thought and what God wants through the scripture that God gave us.

[2]Does your scripture explain about the result of a faith that has knowledge of the scriptures?

Hasyim Aidid (Islam/Universitas Islam Negeri (UIN) Professor) | That those who follow the guidance of the Quran, it is those people who will prosper. And the prosperity must be taken as referring to all kinds of bounty. (Quran Al-Baqarah 2, Al-A’raf 181, 206)

Ngakan Putu Oka (Hinduism/ Indonesian Hindu Scientist Association (ICHI) Member) | In Bagavad Gita IX Sloka 22, to those who pray only to God, without thinking of others, God gives them all they don’t have and protects all they do have. And also in Bagavad Gita IV Sloka 11, whatever the way mankind chooses to approach God, he will be thankful. And humans will follow the path of God any way.

John Liku Ada (Catholic/Diocese of Makassar Archbishop)| Every Catholic is expected to do his/her utmost to have a full knowledge of the Scripture. But what is decisive for someone’s salvation is FAITH. (Romans 3:28) It could be that a person has the full knowledge of the Scripture, but he/she does not believe it; then such a knowledge is of no use for his/her salvation. (John 3:18~21) And also, true faith should be lived out in deeds. (James 2:14, 17~20, 26)

Zakaria Ngelow (Protestantism/PGI Member)| We, believers, should have a good knowledge of the Words of God. And that means we know and acknowledge the truth of God’s love in Jesus Christ and live according to the will of God, as revealed in the Bible. Faith based on a good understanding of Biblical truth leads believers to love God and live in peace with fellow humans and all of God’s creation as well. (Micah 6:8, John 8:32, Romans 12:18)

Edward Kwak (HWPL WARP Office Research Specialist) | The final destination of faith is described as deliverance, paradise, utopia, heaven and salvation. In Matthew 7:21, people who act according to God’s will go to Heaven. It means knowing the Bible that contains God’s will and acting according to it will lead them to Heaven. Knowing their own scripture will let them do as much as they know. If their action is right according to God, then God will bless them.

[3] Does your scripture explain about the Result of a Faith That Has No Knowledge of the Scriptures?

Ngakan Putu Oka (Hinduism/ Indonesian Hindu Scientist Association (ICHI) Member) | In Bagavad gita XVI Sloka 23, when a person has done contrary to the teachings of Veda, he will not attain perfection and happiness or the highest goal. And also, in Bagavad Gita III Sloka 16, for people seeking to satisfy with their sense (the five senses) then his life will be in vain.

John Liku Ada (Catholic/Diocese of Makassar Archbishop) | As already stated above, what is decisive is to believe in God. And also, the Pastoral Constitution ‘Gaudium et Spes’ on the Church in the Modern World (abbreviated: GS) in the Second Vatican Council (1962-1965).The Second Vatican Council clearly sets forth a teaching on the universality of salvation in Christ.

After speaking of the “first fruits of the Spirit” (Romans 8:23), GS.22 continues with that all this holds true not for Christians only but also for all men of good will in whose hearts grace is active invisibly. Namely, the possibility of salvation must not be restricted to an explicit recognition of God. Nor is God remote from those who in shadows and images seek the unknown God, since he gives to all men life and breath and all things (Acts 17:25~28), and since the Saviour wills all men to be saved (1 Timothy 2:4)

Zakaria Ngelow (Protestantism/PGI Member) | In the Bible, Saint Paul wrote a description of believers with his less than perfect understanding of the truth for example that believers are like children that live on milk, not solid food. This means that they are still in the early phase of faith. In Christianity’s long history, eventually various interpretations of Biblical truth manifested as thousands of church denominations.

In ecumenical movements different denominations try to formulate a common ground of basic truth despite their differences. Some Christians memorize Bible verses, but do not understand the substance of the Biblical witness to the truth of God’s love. Some others develop their own interpretation deviating from basic truth and eventually going astray as an unrecognized Christian sect.

Edward Kwak (HWPL WARP Office Research Specialist) | In Romans 10:2-3, if people don’t know God’s will even with their zeal, it is to establish their own, and they don’t submit to God’s righteousness. So faith without knowing the scripture and faith with misunderstanding of the scripture can only be one-way faith, not true faith with God.

Through the 2nd Makassar WARP Office meeting in Indonesia, participants were able to find out about ‘the reasons for God to provide humanity with the scriptures’ and the ‘differences in life of faith between knowing and not knowing the scriptures’, within the context of Islam, Hinduism, Buddhism, Confucianism, Catholic and Protestantism.

Each scripture mentions that abundance, salvation, peace, and heaven lie only in the hands of those who know and keep to the Will of God. Therefore, walking the life of faith with the understanding of scriptures is the path to bring our hope into reality as believers.

This meeting proved to be a valuable time to attain insights to the question ‘Do Religious People Need the Holy Scriptures?’ We look forward to attain the true will of God in the scriptures through the Scripture Dialogue meetings and to renew HWPL WARP Offices and religious leaders’ commitment to leave positive impacts in the world.