Skip to content
Previous
Next
Published On: November 18th, 2015 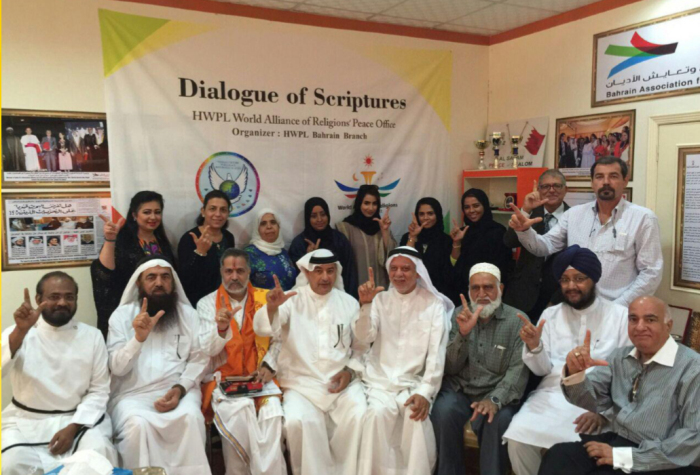 Bahrain – In spite of the tension in the Middle East since the terrorism in France, the 6th HWPL Bahrain Manama WARP Office was held on the 14th of November. At this meeting, women and youth members who love peace also attended showing their desire for peace within the Middle East. Religious leaders from Islam, Sikhism, Hinduism, and Christianity participated in the Dialogue of Scriptures.
The participation of women and youth at the WARP Office meetings was first suggested by HWPL Publicity Ambassador Mr. Mohamed Buzaboon (Islam, Chairman of the Bahrain Association for Religious Coexistence & Tolerance) He agreed with HWPL chairman Mr. Man Hee Lee’s proposal about the importance of women and youth in achieving world peace. Mr. Buzaboon has the role of monitoring and encouraging the religious leaders in their efforts towards fulfilling peace.

“This is something very unique, to discuss on the same topic with people of different faiths. From different religions everybody participated to know about religions different from their own. To speak about death and life is very informative for human beings. I really enjoyed it.”

Life of Unresolved Worries — Opinion on “The Secret of Human Life (birth, old age, sickness, and death)”
Mr. Ebrahim Nono (Judaism, member of the Jewish community) answered,
“Life and death is the essence of human life. Throughout the Torah ‘old’ is linked to wisdom and the Holy Scripture considers old age a virtue and a blessing. The fact that God has granted a person a single additional day of bodily life means that he has not yet concluded his mission in life, and that there is still something for him to achieve in this world.”

“When we get sick, we are taught by the Prophet Muhammad (peace be upon him) that it is a forgiveness of our sins. ‘Seeing that you were dead and He gave you life. Then He will give you death, then again will bring you to life (on the Day of Resurrection) and then unto Him you will return’ (Quran, Sura Al-Baqarah: 28).”

To the question, “Is the reason for birth, old age, sickness, and death recorded in your Scripture?” Mr. Vijay Kumar (Hinduism, Priest of Manama Hindu Temple) answered,

“In the scriptures of Hinduism, suffering or pain means physical, mental and emotional instability and afflictions. This manifests in ageing, sickness, death and rebirth.”

“Birth, old age, sickness and death came upon humans because of Adam’s sin by breaking the covenant with God. God who is the source of life left men and therefore death came in. Not only the reason but also the way to resolve sin is written in the Bible. As it is sin that brought death, sin has to be resolved. How to resolve sin is also well recorded in the Bible. What is hopeful is that in Revelation, the last book of the Christian scripture; it is prophesied or promised that the world of death would be restored to the world of life.”

In addition, for peace to finally become a reality they are asked to urge the current and former heads of state and chief justices to enact the International Convention on the Renunciation and Cessation of War and International Armed Conflicts.