Berlin, Germany, The Conference for the Sustainable Peace and the Support of the Unification of the Korean Peninsula

On the September 9th and 10th 2019, the “5th Annual Commemoration of the September 18th World Peace Summit” was held in Hilton Berlin, Germany hosted by Heavenly Culture World Peace Restoration of Light (HWPL), an international peace NGO, in cooperation with international community organizations and governments. The Summit was joined by 100 participants including Former Prime Minister of East Germany, the Ambassador of South Sudan in Germany and delegates from the government of Germany and Romania, legal experts, religious leaders, and representatives from media, youth, and civil society to talk about the collaborative work in realization for peace: “The Spreading of Culture of Peace in Europe” and the “Reunification of Korean Peninsula”.

The Realization of Peace through “Legislate Peace”

On September 9th, the conference provided a platform for 100 participants to share the progress of “Legislate Peace (LP)” campaign and urge participants for the support of spreading the culture of peace in Europe. 20 leaders and representatives wrote the letters of support for DPCW and 65 participants expressed their support by giving signatures of support. 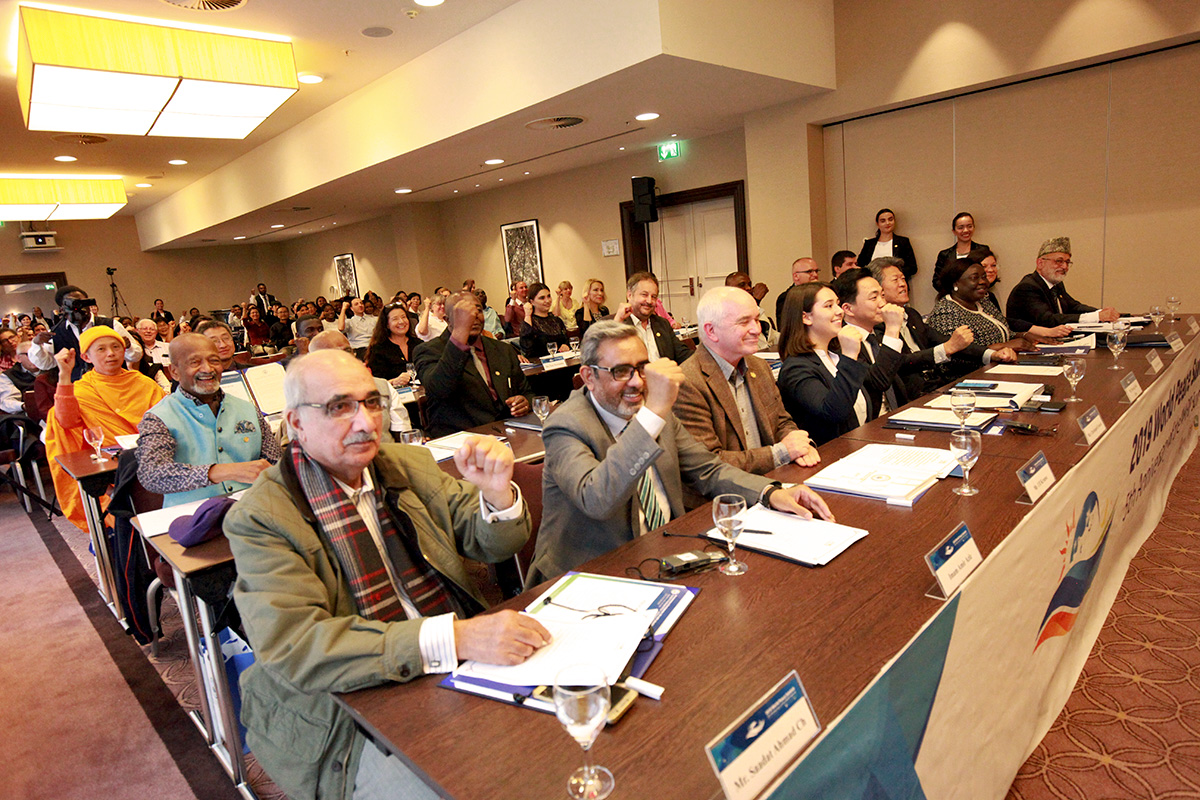 In her speech, H.E. Beatice Khamisa Wani Noah, Ambassador of South Sudan in Germany, said “In the past, South Sudan had emotional wounds of war, however now the president of South Sudan is exerting all efforts towards consolidating peace.” She also added, “I believe peace can be achieved if Africans, Europeans, Asians, and the people of the world work together for the 10 articles 38 clauses of Declaration of Peace and Cessation of War (DPCW)” and the implementation of peace education and the culture of peace envisioned by HWPL will pave a way for the future generation to bring peace.”

Mr. Kim Ji Seong from the Republic of Korea read a written peace letter on behalf of youth. A few years back, Kim was a military soldier in Korea who was assigned to recover the bodies of soldiers killed in the Korean War. “Less than 1 percent of the remains are identified and returned to the family,” said Kim, explaining why he joined the work of HWPL, urging leaders to support the DPCW to be introduced as resolution in UN.

On September 10th, Tongil TV, human rights organizations for North Korea, political figures from Germany and Romania gathered to seek ways of bringing the reunification of the Korean Peninsula. The participants at the conference, “Germany Paving the Way for the Peaceful Reunification of the Korean Peninsula” actively examined the past experience of resolving conflicts and bringing development in East and West Germany. 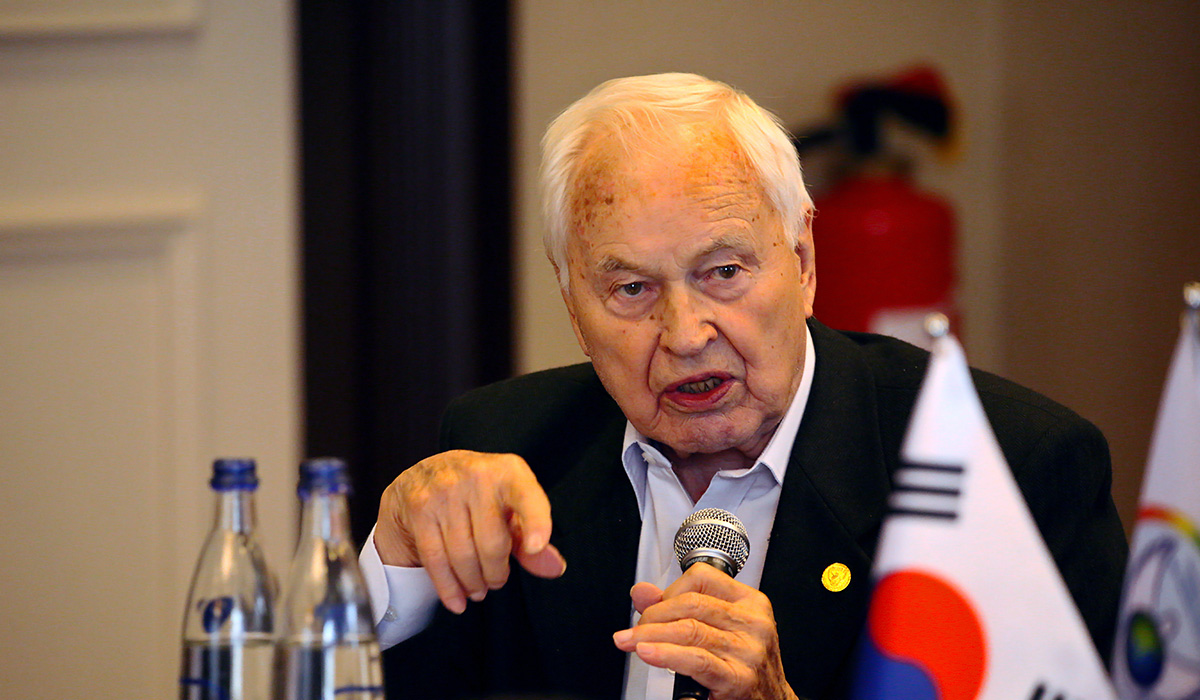 During the panel discussion, H.E. Hans Modrow, the former Prime Minister of East Germany, said, “Discussions should be focused on examining the current issues, consequences of the reunification in order to overcome the unresolved social and economic issues from the German Reunification.” He also mentioned that the Korean government and people should pave the way to gradually work for the reunification in the Korean Peninsula based on the case in Germany.

Having in mind the lessons taught by the two world wars and the conflicts of the Cold War, some of them ongoing even at present, one would expect the 21st century to be a century of peace. However, it is a century plagued by conflict, terrorism, extremism, fundamentalism and all types of threats created by mankind, as a result of differences in ideology, religion and culture.
In this regard, there is an acute need to implement a culture of peace and the adjoining education efforts. Implementing a culture of peace is easy, as long as people and institutions are dedicated to fully endorsing it. Campaigns must be performed in order to raise the awareness among people, from the youngest to the oldest, that peace is the ultimate solution in the face of disaster. The very words ”peace” and ”cessation of war” have inside the roots of establishing a new international community, one that would be open to dialogue and that would thus prosper. Peace brings prosperity; war brings financial collapse. 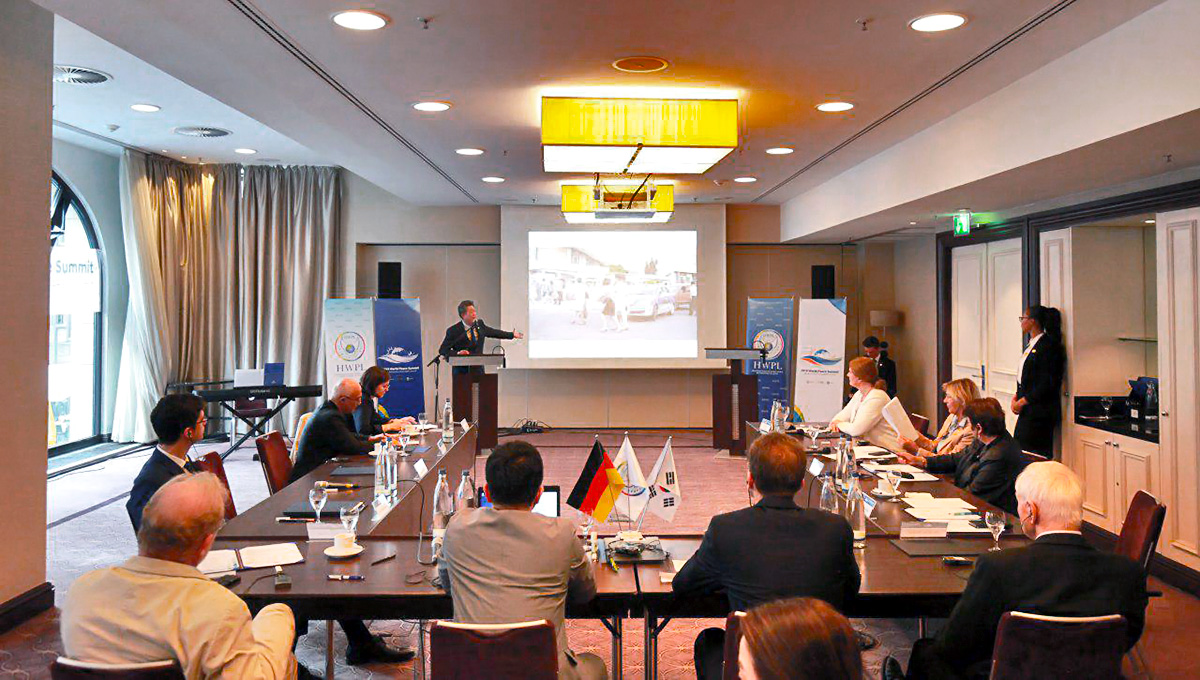 In his summarizing words, Mr. Byeong Suk Kim, the General Director of HWPL Berlin, introduced the peace initiatives Chairman Man Hee Lee of HWPL has carried out in the pursuit of the peaceful reunification of the Korean Peninsula since 2010, such as “Declaration of Unification” and “Giant Hand-printed Korean Flag”. He said, “The steps Germany has walked to unify the East and the West will serve as invaluable experience and guidelines for us to pursue to achieve a peaceful reunification of the Korean peninsula. The Germany is highly esteemed after becoming the center of Europe and the whole world after reunification. Highly motivated by the case of Germany, North and South Korea are determined to achieve peaceful reunification. HWPL is forefront in taking such initiatives.”

Distinguished guests of the summit pledged to bring their strengths together for the purpose of sustainable development of peace in Europe and the peaceful reunification of the Korean Peninsula.