Skip to content
Previous
Next
Published On: December 29th, 2018

Beyond Expectations: 2018 HWPL Journey of Peace

In 2018 Heavenly Culture, World Peace, Restoration of Light (HWPL), holding the answer to peace, carried out peace projects under its three core aspects, and the results and practice of these values were immediately visible as the fruits of peace that blossomed before our very eyes.

Some of these major achievements include three African countries giving their national support for the DPCW, the establishment of MOUs with the Black Sea-Baltic Studies and Consensus Practices (Centre BBS), the launch of the ‘Solidarity of Religions’ Peace Committee’ with high-level religious leaders and the 155,985 peace letter campaign. These truly show that steps are continually being taken in order to achieve a world of peace that is no longer a dream but finally a reality.

1. Signing of an MOU with 10 universities at UN ECA, Addis Ababa, Ethiopia 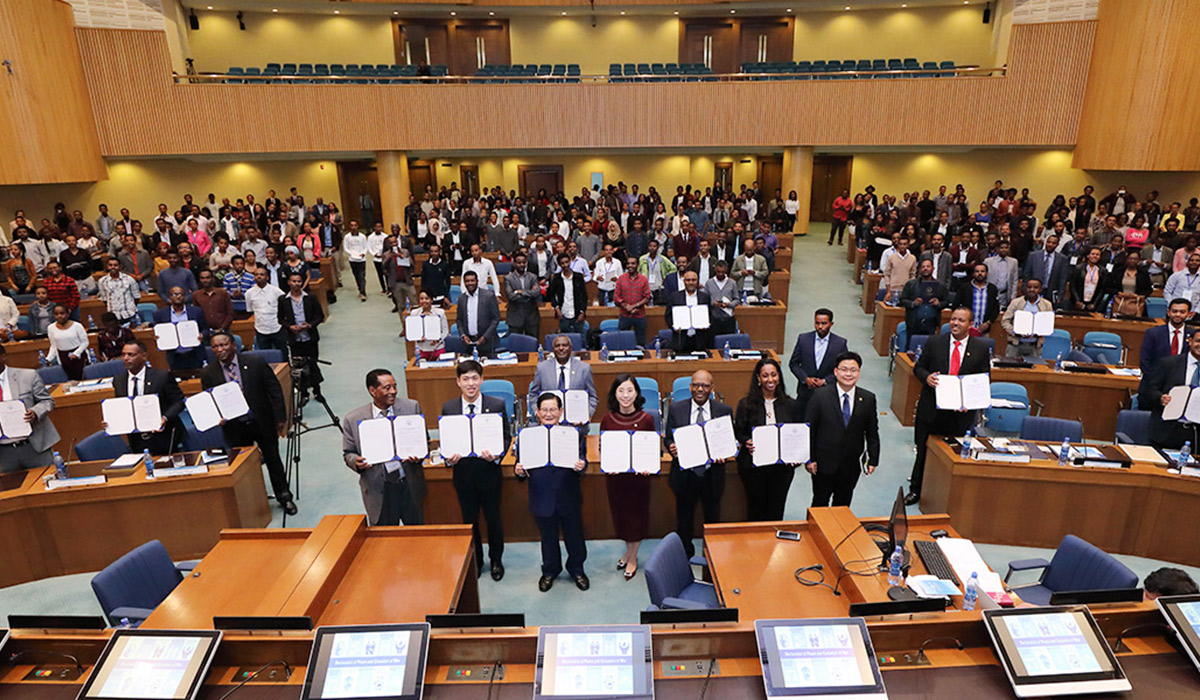 In August, a signing ceremony for the DPCW was held in the United Nations Economic Commission for Africa (UN ECA) located in Addis Ababa, Ethiopia together with representatives from 10 universities, State Education Ministers and 700 university students. All parties pledged to fulfill their respective missions of peace in each location.

In addition, three African countries (Kingdom of eSwatini, Seychelles and Comoros) have declared official support for the DPCW at a national level. With this, the DPCW will be recognized as the true answer to peace and will be passed as a legally binding instrument.

2. Announcement of the “Goseong Agreement” and Signing of the MOU with the Black Sea-Baltic Studies and Consensus Practices 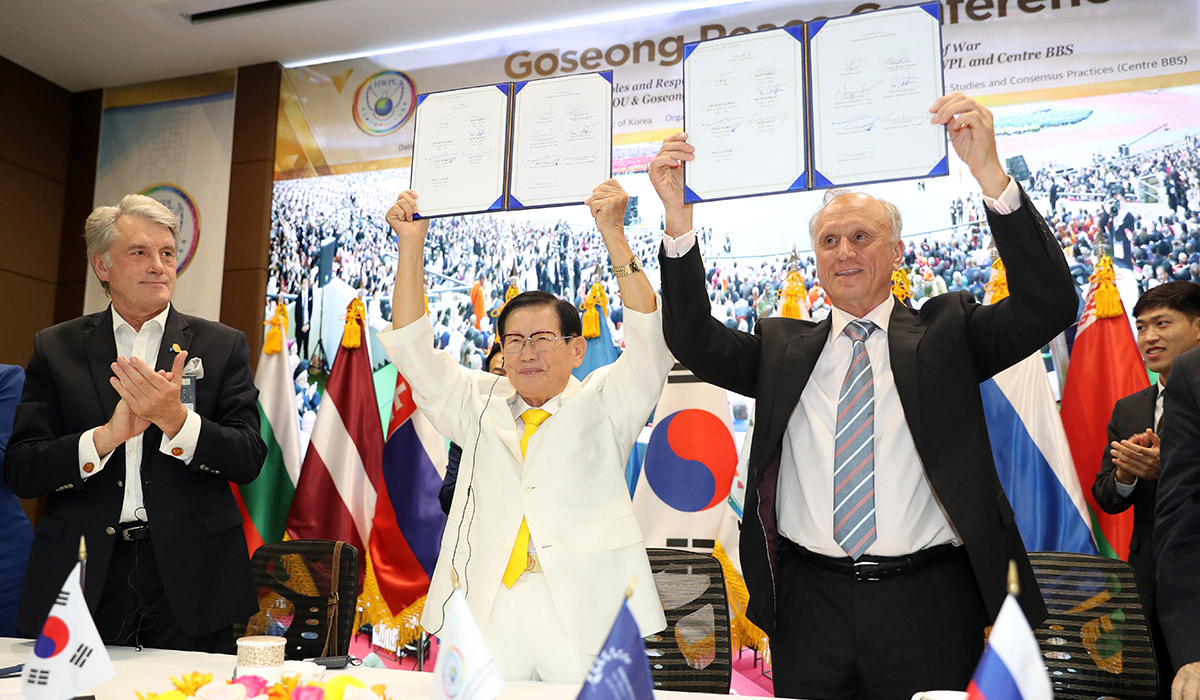 The Black Sea-Baltic Studies and Consensus Practices (Centre BBS), which is composed of leaders from Eastern Europe, actively supported HWPL’s peace activities at a ceremony held during the 4th Anniversary of the September 18th World Peace Summit. On September 16th, Centre BBS signed the ‘Goseong Agreement’ to further cooperate with peace activities after participating in the ‘Goseong Peace Conference’ and signing the peace MOU with HWPL.

3. A Reality that is no longer a Dream: Peace on the Korean Peninsula 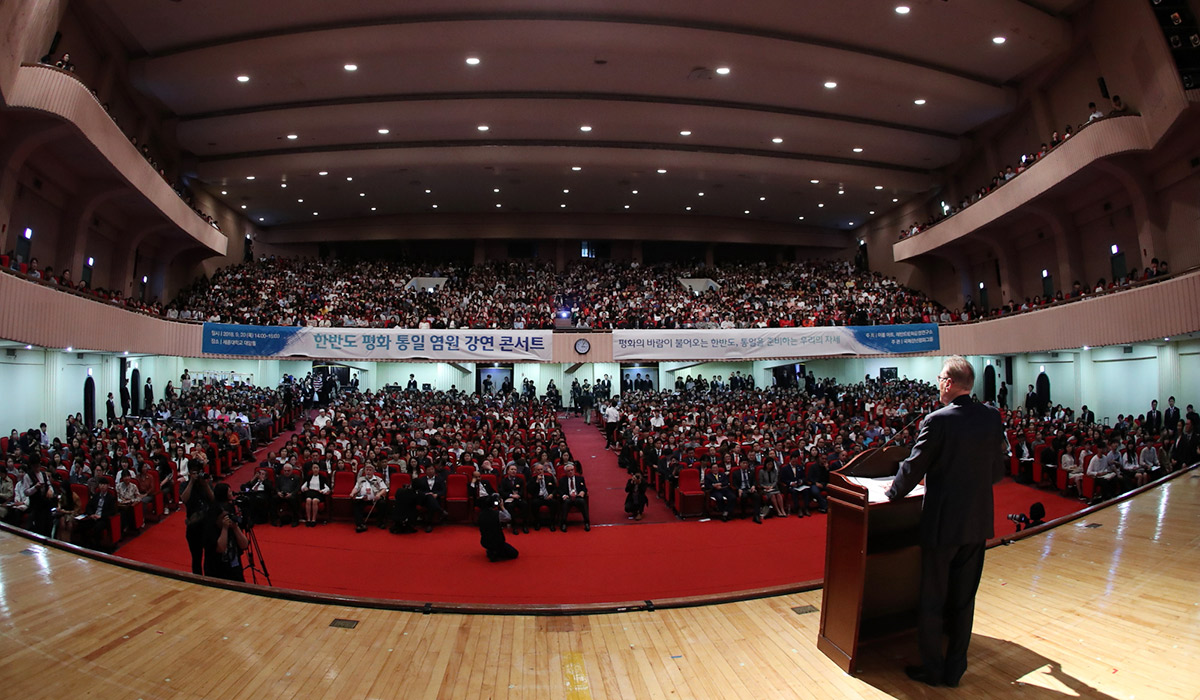 During the same time as the 4th Anniversary of the September 18th World Peace Summit that was held in Incheon, South Korea, the leaders of the two Koreas met in Pyongyang and held discussions for peace and cooperation on the Peninsula. The resulting promise of denuclearization for peace and stability on the Korean Peninsula truly shows that Article 2 of the DPCW is becoming a reality for the near future.

At the ‘Lecture Concert for Peaceful Unification on the Korean Peninsula’ that was held at a university in Seoul, South Korea, HWPL and the Institute for Advanced Studies in Levant Culture and Civilization (ISACCL) signed an MOU to promote peace around the world. HWPL is continuing its efforts to promote the peaceful unification of the Korean Peninsula through activities held with various international organizations and community members.

4. The Future of all Children is Peace Education 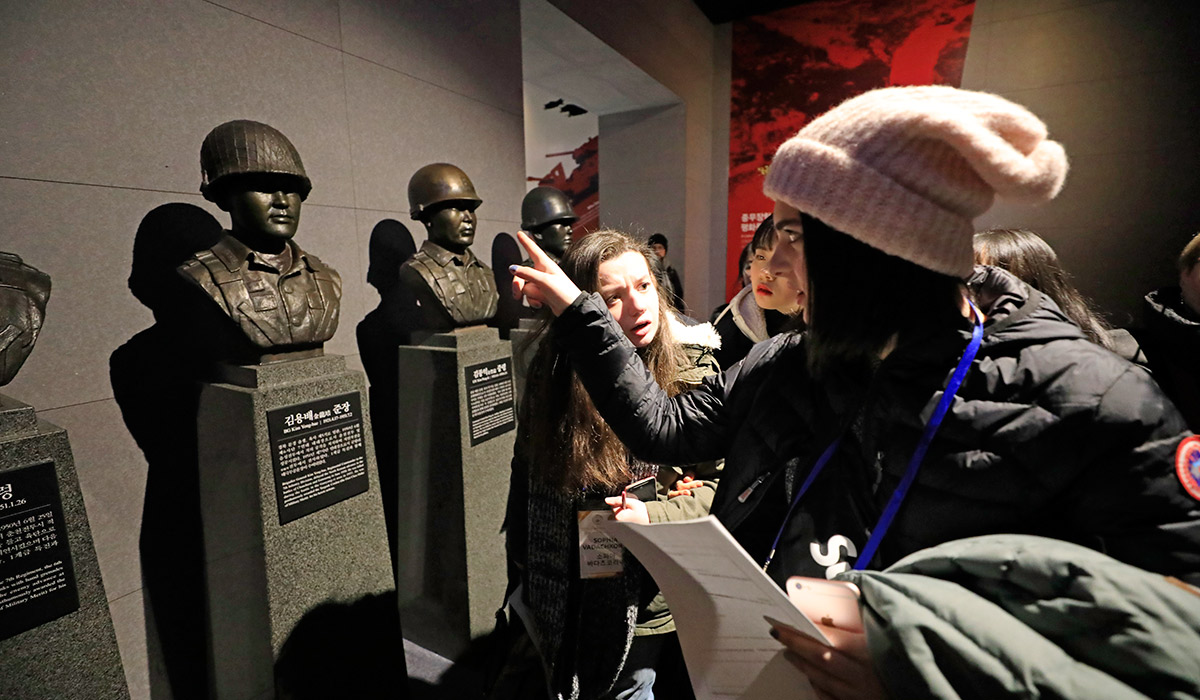 The world’s passion for peace is heating up due to the popularity of HWPL’s peace education. At the ‘Peace Education Development Forum for Global Advancement’ that was held during the 4th Annual Commemoration of the September 18th World Peace Summit, HWPL signed an MOU with the Ministries of Education of Sri Lanka, Colombia, Guatemala and Iraq. This clearly demonstrates the rapid spread of the culture of peace as stated in Article 10 of the DPCW. 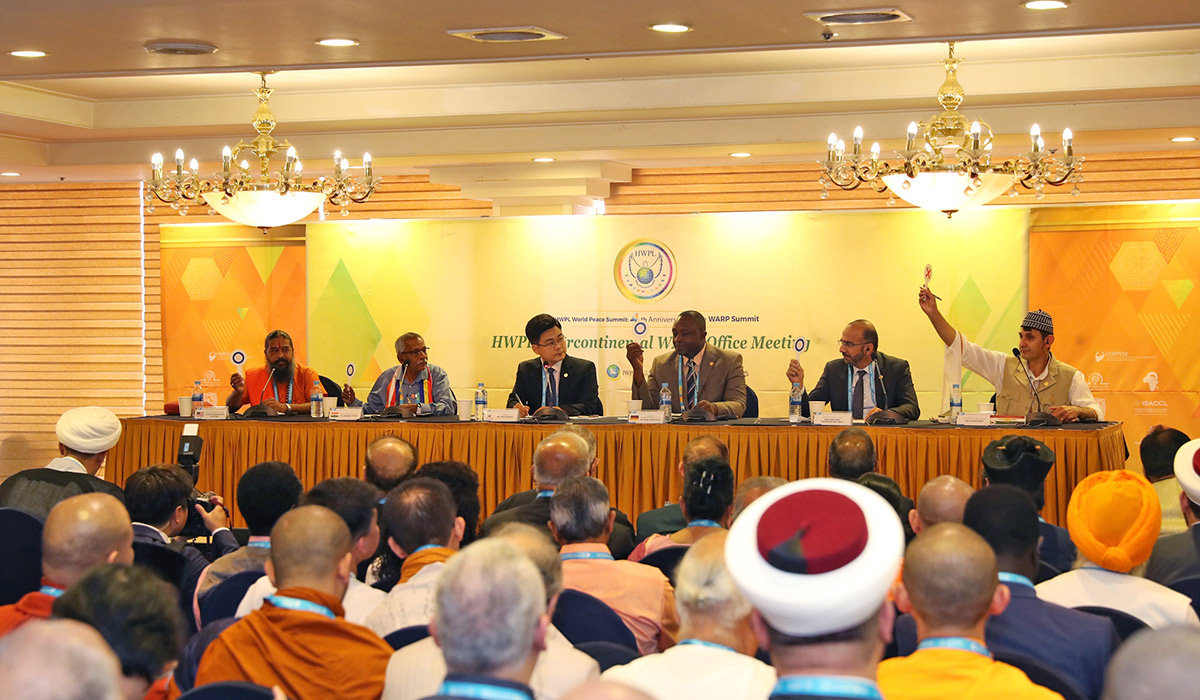 The Open Dialogue with Religious Leaders was held a total of 35 times, allowing Christian pastors to meet and discuss which doctrines are in accordance with the Bible and establish a standard for comparison, and around 110 ministers attended. In addition, a total of 4 WARP Office meetings were held, which actively worked to bridge the gap between religious groups and allow for comparison and discussion regarding the teachings found in the scriptures of those different religions.

6. The Dreams of the Youth contained in 155,985 Peace Letters and the Hope of the End of the Korean War seen in the ’10 Million Signature Campaign’ 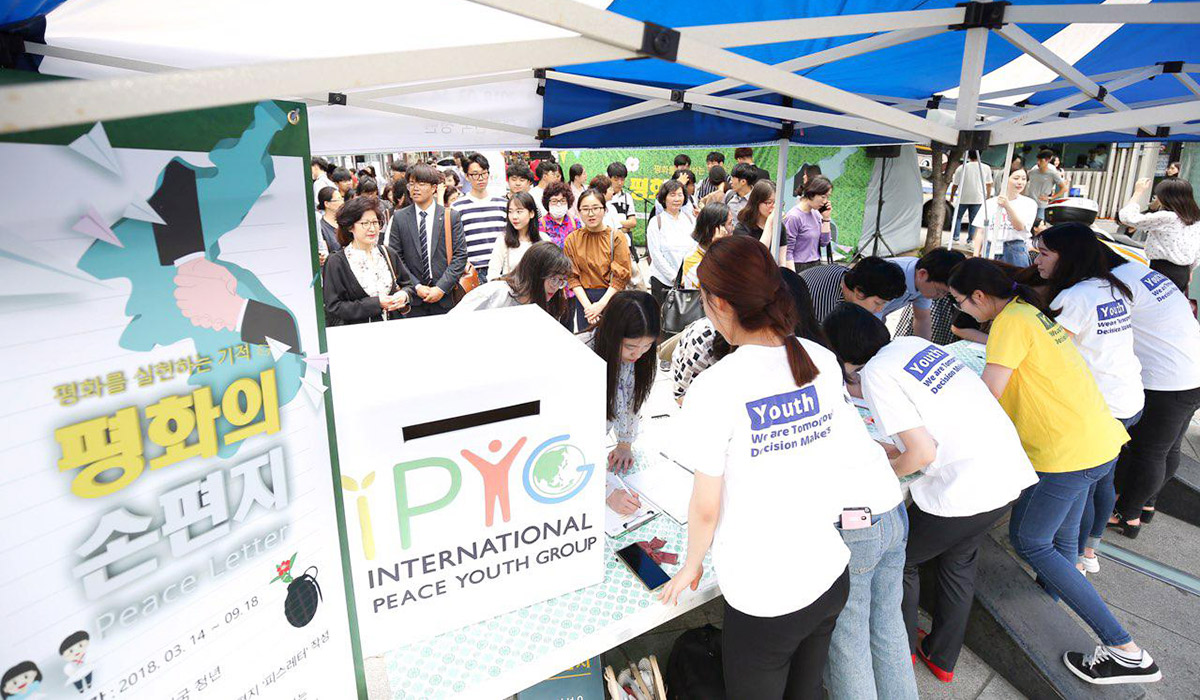 The International Youth Peace Group (IPYG), alongside young people from various countries, have completed 155,985 handwritten peace letters to inform others of how the realization of world peace based on the DPCW can be achieved and delivered them to the heads of state and leaders around the world, including the Republic of Korea and more.

The International Women’s Peace Group (IWPG) also held the ’10 Million Signature Campaign’ urging for the establishment of a peace treaty to finally establish sustainable peace on the Korean Peninsula based on a statement made by Chairman Man Hee Lee in the ‘Declaration of Unification’.

Throughout 2018, HWPL joined together with legal professionals, the media, youth, women and religious leaders. Walking together with the combined strength of all members, public awareness of peace grew as a result of the news of peace being spread all around the world.

In 2019 as well, HWPL will continue taking solid steps forward to promote the DPCW, which is the answer to peace, within the international community. HWPL will also run continuously with the goal of introducing the DPCW to the UN until it is passed as a binding international legal instrument.