Skip to content
Previous
Next
Published On: March 11th, 2018

Footprints of the 26th Peace Tour at a Glance – Part I

“I advocated to achieve peace and cessation of war and leave it as a legacy to the future generations. I witnessed the world that has become anew. It was outstanding this time. Politicians, ministers, educational professionals, religious leaders and anyone else that I met even took the initiative in saying they would help (the work of peace) at the risk of their own lives,” stated Chairman Man Hee Lee of HWPL regarding this world peace tour.

Let us follow the footprints of the world peace tour which lasted a total of 11 days (from 23 January to 2 February) and spanned a total of four countries with the Philippines as the first country visited this year, followed by Indonesia, Malaysia, and Myanmar.

At the Forefront of Peace Education: the Philippines and Indonesia

HWPL, an organization committed in promoting peace, and the Commission on Higher Education (CHED) of the Philippines signed a Memorandum of Agreement on Peace Education on January 23, 2018 at CHED Central Office. This is in line with CHED’s plan of introducing and integrating peace education in the higher education curriculum.

After the signing and during the press conference, Commissioner, Ronal Adamat emphasized the need to promote peace by giving a realistic example when he said: “Children easily imitate war through toys depicting weapons of war but they don’t know how to play and imitate peace.”

It is hoped that through the collaboration of HWPL and CHED; the aim of promoting peace will be attained by starting the campaign in the state universities and colleges. 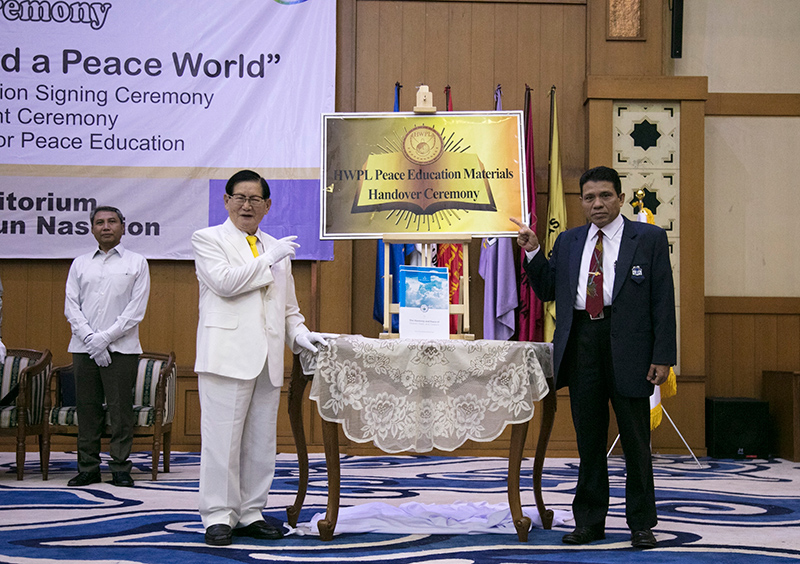 Dr. Barsihannor Zuhri, the Dean of UIN Alauddin of Makassar, stressed the importance of such peace academies, stating that “Since Indonesia is a multicultural, multi-religious country, conflicts are constantly taking place. Therefore, harmony and peace are more desperately needed. Educators with the perspective of peace should strive to make peace education and the culture of peace spread to Indonesia.”

Chairman Man Hee Lee of HWPL said “All students should be taught peace from the textbooks they learn every day, and the teachings of war must be changed and discontinued. How can we achieve peace? Peace begins by teaching students about peace,” once again emphasizing the importance of peace education.

In Indonesia, the second country visited during the 26th Peace Tour, the HWPL peace delegation discovered an opportunity that would become the turning point in the direction of achieving “harmony inside of peace”.

On January 27th, the President of Himpunan Advokat Pengacara Indonesia (HAPI) and 13 lawyers gathered in Jakarta to discuss the establishment of a legal framework for settling disputes of the national and international society to secure peace. At the event, the 10 articles and 38 clauses of the DPCW were introduced as a mechanism to strengthen the peaceful coexistence among nations, peoples and religions, as well as to expand peace awareness through peace education and the spreading of a culture of peace.

“HWPL is committed to bringing world peace and cessation of war through the establishment of an enforceable law compatible with the 10 articles and 38 clauses of the DPCW, which can prohibit all kinds of armed conflicts. Thus, the people of Indonesia are also responsible for advocating peace building through a legal foundation in the country. This is one of the obvious solutions for the achievement of sustainable peace.” said Mr. Man Hee Lee, Chairman of HWPL, emphasizing the need for the international society’s advocation and cooperation.

“The solution for eradicating the structural causes of violent conflicts is not through force or the use of armed weapons, but rather through the enactment of a peace-related law compatible with the DPCW.” added Ms. Hyun Sook Yoon, the acting Chairwoman and Director of IWPG HQ.

Mrs. Dr. Hj. Elza Syarief SH. MH., Chairwoman of HAPI, stated, “HWPL has a great vision to achieve peace all over the world. Also, I am moved that all members of HWPL are working voluntarily for peace. I think HAPI members will work together for peace building with HWPL,” expressing high expectations and ambitions for a peace movement in Indonesia.