Skip to content
Previous
Next
Published On: October 30th, 2018

During the 2018 HWPL World Peace Summit: 4th Anniversary of the WARP Summit around 100 religious leaders from 37 countries who have been participating in the World Alliance of Religions’ Peace (WARP) Offices up to now met on September 19th and held the HWPL Intercontinental WARP Office Meeting. The first 2 Intercontinental WARP Office Meetings were held online, but in honor of the 4th annual commemorative summit major participants from the WARP Office meetings gathered in Korea in a single location and took time to compare their scriptures. 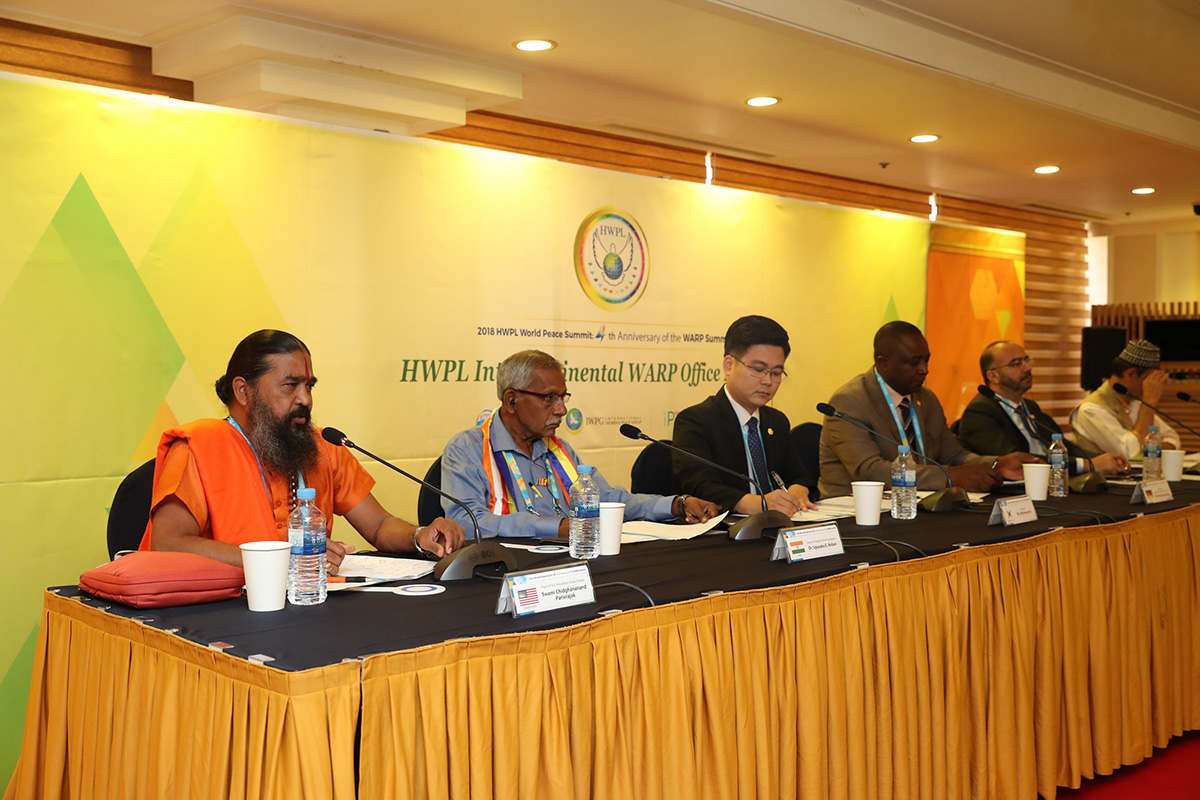 Around 100 guests from Korea and abroad participated in the meeting and a panel of representatives from Hinduism, Buddhism, Christianity, Islam and Zoroastrianism discussed the main topic as well as responded to questions from the audience members. The focal point of this discussion was regarding “God”; however, the discussion was not limited to the god of a particular religion but rather expanded to encompass the transcendental existence of any being that is in control over all creation. In relation to the subject of “God” a number of questions were explored, such as ‘Who is he?’, ‘What is the law, cause and origin of nature?’, ‘If God exists, what type of existence does he have and what is his purpose?’, and ‘Why is there no direct communication with God?’. 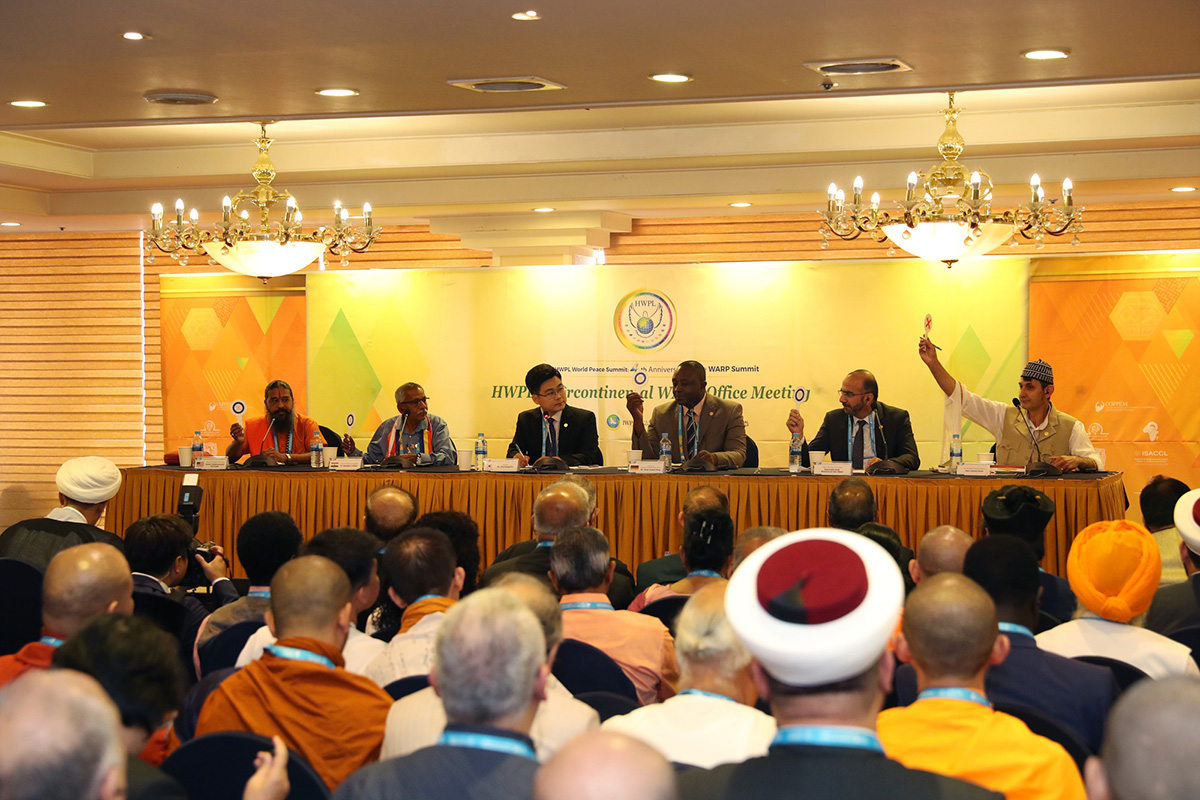 This discussion first started with an O, X question being given to the panelists regarding ‘Is there a record of the existence of God in your scriptures?”. In response, the representatives of Hinduism, Christianity, Islam and Zoroastrianism answered with O and the Buddhist representative answered with X. The panelists who answered O were then given time to share about the Creator and how all of creation was first created according to their respective religions. The Buddhist panelist who had answered with X explained that in Buddhist scriptures “the origins are not explained about in terms of a Creator, but rather about human life.”

Second, the question was asked regarding ‘Is the place where God is dwelling recorded in your scriptures?’, to which all panel representatives answered O aside from the Buddhist representative who answered X as with the first question. The Christian panelist explained that at the time of Moses God dwelt in the tabernacle and at the time of Solomon he resided in the temple. Also, the scriptures record that when Jesus came 2,000 years ago he himself was God’s temple and that we are also the temple. The Islam representative stated that, “It is said that there is a throne, but there is no telling where that throne is, but the angels are supporting it. Also, it is recorded in the scriptures that God is closer to you than your jugular vein.”

Third, time was given for audience members to ask questions to the panelists. It was stated that, “in Hinduism God is understood and personified as material things that we can see, and I think there is a problem in limiting God to human thought in such a way,” so the Hindu panelist was asked about his thoughts regarding this issue. The Hindu panelist answered, “God is named by each person individually.” 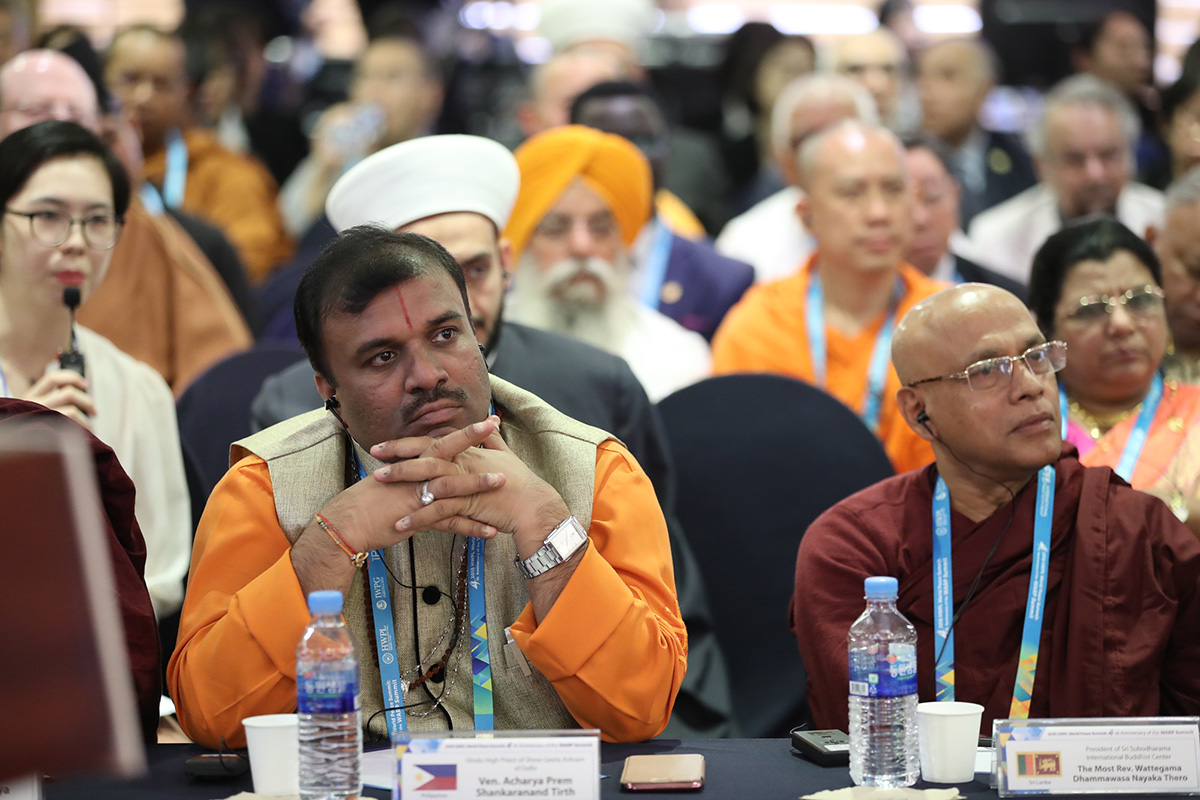 The final portion of the event consisted of a concert put on by the children’s choir where they sang “Heal the world, We are the world”, showing the heart that transcends religions, races and cultures. All participants promised that moving forward they would all participate in and further develop the WARP Offices in their own respective continents and countries.

These days there are many religions all around the world and disagreements and conflicts between such religions are continuing. Amid such circumstances, many religious leaders are regretful over this harsh reality and are thus putting in passionate effort into uniting and becoming one for the realization of world peace through active discussion. So far WARP Office meetings have been held online and offline in around 200 locations all over the world during the past 4 years. In the future as well, these WARP Office meetings will become the groundbreaking tool for citizens around the world to seek the truth and spread the true value of life, which is a culture of peace.