Skip to content
Previous
Next
Published On: June 4th, 2022

Institutionalizing Peace: Designing Collective Action to Bring Peace as a Culture and Norm

To tackle the current threats of life and stability from wars and conflicts, HWPL’s 9th Annual Commemoration of the Declaration of World Peace was held online on May 25th, 2022. With 3,000 participants as representatives from politics, religion, academia, media and civil society, the event with the theme of “Institutionalizing Peace: Realizing the Collective Will for Peace” presented the progress of international cooperation to realize sustainable peace ensured by legal instruments. 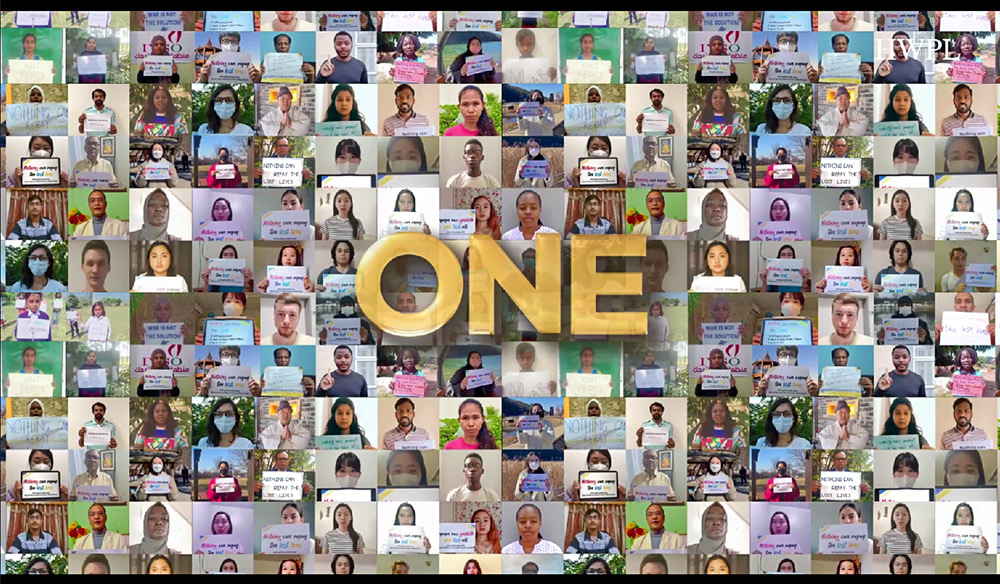 Heavenly Culture, World Peace, Restoration of Light (HWPL) proclaimed the Declaration of World Peace back in 2013. The declaration addresses the endorsement of national leaders, engagement of women and youth, cooperation among civil societies, and expansion of media coverage on peace. Afterward, it was developed into the Declaration of Peace and Cessation of War (DPCW) as a process to establish international legal instruments for global peace.

Young Min Chung, the General Director of the International Peace Youth Group (IPYG), an affiliate group of HWPL, said in his progress report, “730,000 citizens from 176 countries have signed in support of the DPCW for the past nine years which allows them to express their opinions in the most direct way. Recently, the IPYG is running the Youth Empowerment Peace Workshop (YEPW), where they discuss the agendas such as education, human rights, and conflicts and conduct joint action as well as policy proposals.”

The 10 articles and 38 clauses of the DPCW include prevention and resolution of conflicts, gradual reduction of war potential and turning weapons into daily tools, respecting and resolving conflicts based on religion and ethnic identity, and spreading a culture of peace. The declaration is geared towards engaging nations, international organizations, NGOs, and individual citizens in taking actions for a peaceful world.

As for the collaboration for peacebuilding, Chairman Man Hee Lee of HWPL appealed to the participants to be united as “messengers of peace” “to bring freedom and peace to future generations.” “This time (Russia) invaded Ukraine and started the war. This is why HWPL and families of peace have long called for the establishment of international law to prevent war potentials. So, we gathered experts in international law globally … and made the DPCW with 10 articles and 38 clauses.”

As a case of peace activities to resolve conflicts in India, MOUs among religious leaders were signed since for further cooperation with understanding religions based on comparative studies on religious scripture. In particular, the partnership between HWPL and the International Organization for Religion and Knowledge at Lampur led to erecting a peace monument to convey values of peace to local citizens.

Educators’ participation in peace-related activities was also introduced in the event. Teaching methodology with the use of Metaverse was demonstrated as a virtual world platform where students are able to experience peace by reading materials and observing diverse peace activities that are carried out in many parts of the world.

One of the participant students said, “I learned the need for an international law to achieve peace. We need a law that can achieve peace. It is important that people abide by the law and if all people become citizens of peace, we would not even need the law.”

Mr. Supalak Ganjanakhundee, Thammasat University’s Pridi Banomyong International College Visiting Fellow and former Chief Editor of The Nation in Thailand said at the journalist report in the event that the foundation of peace is closely related to democracy that serves as an opened room for “allowing participation of civil society” to peace process. Elaborating the current deadlock of the peace process in Southern Thailand, he said, “Any peace process that would lead to lasting peace must address the problem at its root cause and must be conducted along the democratization with intensively participation of not only stakeholders but also civil society.”