“Planting the Trees of Peace” Campaign, Commemorating the 5th Anniversary of the Declaration of Peace and Cessation of War (DPCW)

From 14 March to 10 April, members of Heavenly Culture, World Peace, Restoration of Light (HWPL), the International Women’s Peace Group (IWPG), and the International Peace Youth Group (IPYG) around the world commemorated the 5th anniversary of the Declaration of Peace and Cessation of War (DPCW) by planting trees of peace.

The “Planting the Trees of Peace” campaign was held in 21 countries in 5 different continents including the United States, Nicaragua, the Philippines, South Korea, and Ukraine. People who participated in their respective countries planted a total of 5,600 trees during the event. 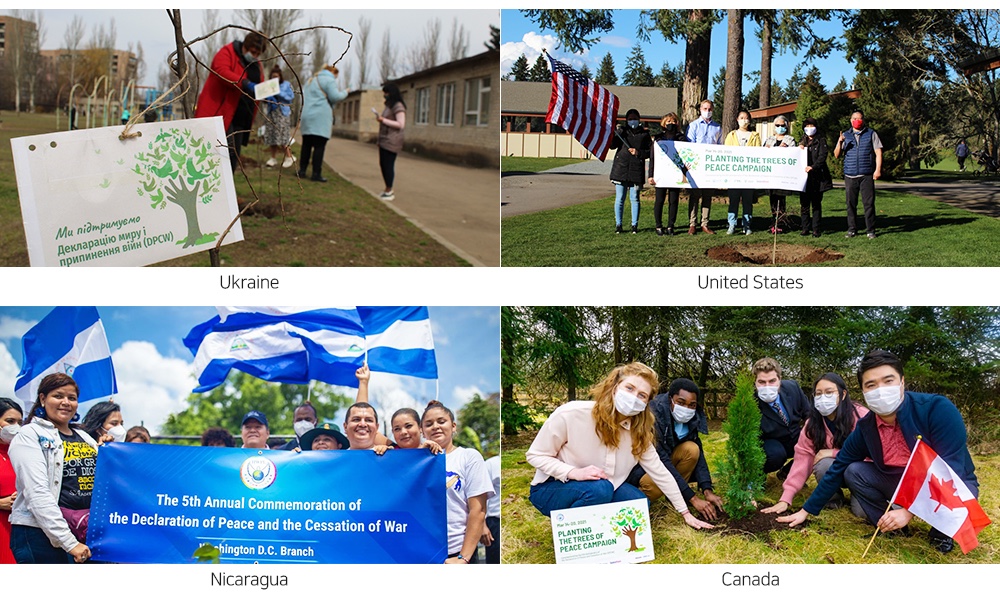 The “Planting the Trees of Peace” campaign with the tagline, “We support the DPCW,” reveals how people are continuing to participate in the peace movement despite the COVID-19 pandemic. Those who participated in the campaign encouraged others to take part in this peace movement by uploading videos and photos of planting trees on their social media.

Juan Andrade, the Flying Tree Director of Trinidad and Tobago, emphasized how planting trees is the first step in achieving peace by mentioning, “I’m so grateful to be one with global citizens through this campaign. It is an excellent initiative just like the trees that purify the air.”

Furthermore, Natalia Dmytrieva, Head of the Education Department of the Kostiantynivka Village Council of the Kherson Region in Ukraine, said, “We very much appreciate the opportunity to participate in the global campaign, “Planting the Trees of Peace.” Ukrainian children from Kherson, like all children in the world, want a happy childhood on a clean and peaceful planet. Every tree planted unites us all into one big global family.”

The DPCW, comprised of 10 articles and 38 clauses, aims to ban all activities related to war and contains solutions to conflicts and how to realize peace. HWPL proclaimed the DPCW in 2016 and has run the “Legislate Peace” (LP) project, which is a global initiative to ensure peace through international law, to gather signatures in support of the DPCW so that the DPCW can be adopted by the UN General Assembly. The “Planting the Trees of Peace” campaign where anyone can join was designed as part of the LP Project.

Although it is difficult to gather together and form solidarity of peace due to COVID-19, while planting trees, participants were able to think of how war could destroy the global environment. This campaign is also meaningful because it delivered a message of peace to people around the world while supporting the value of sustainable peace and coexistence under the motto of “support the DPCW.”

HWPL is planning to cumulate a list of those who participated in planting the trees of peace and submit an official document supporting the DPCW to respective governments and cities. HWPL plans to expand the citizen-led peace culture by including the list of the people along with the establishment of the Peace Monument and Peace Park in the official document supporting the DPCW, and will lead the movement so that more people can participate in realizing world peace.

This campaign was conducted in conjunction with the “Greening of the Planet Project” — where countries like Ukraine aim to contribute to the restoration of the global ecosystem — by planting 1 million trees in 100 countries in 2021. This will continuously be conducted so that the DPCW can gain greater support internationally.