Skip to content
Previous
Next
Published On: September 20th, 2017 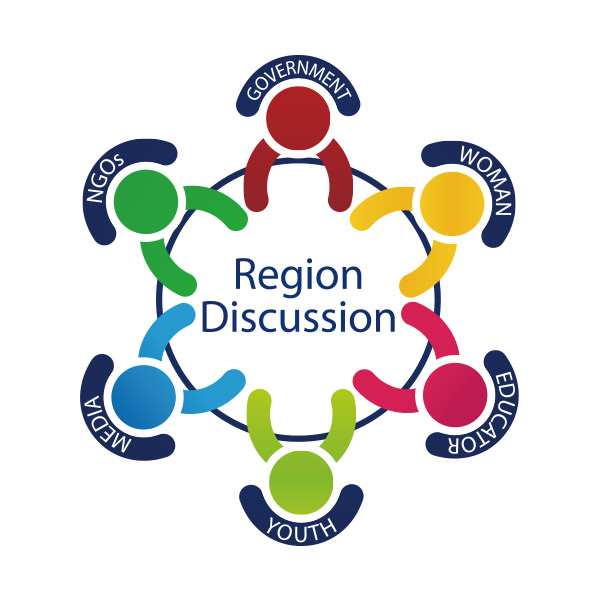 The “Region-Specific Discussion for the Implementation of the Declaration of Peace and Cessation of War’ was divided into Part 1 and Part 2, which were held in the morning and evening respectively. Each part consisted of 8 roundtable discussions, making for a total of 16 roundtable discussions throughout the day. Participants were divided based on geographic regions and held discussions regarding appropriate plans of actions in accordance with the specific characteristics of each region. Here we will introduce some of the major projects that were explained and analyzed during this conference. 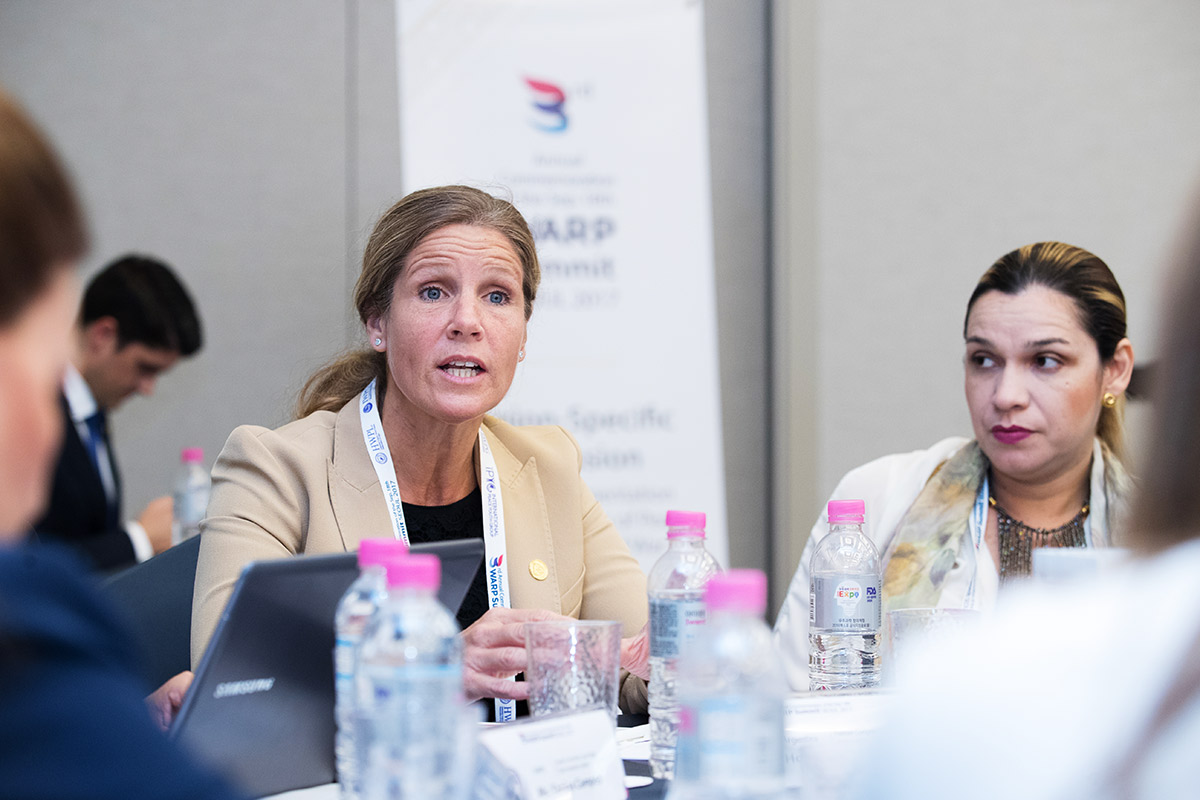 Currently there is substantial and active support for the Declaration of Peace and Cessation of War (DPCW) that can be seen within the Central American Parliament (Parlamento Centroamericano in Spanish, also known as PARLACEN), which set the stage for the discussions regarding future actions plans for continued progress that were held during this meeting.

In light of these significant steps forward, discussions were held regarding concrete action plans for further progress towards the ultimate goal of peace through an international law. Participants were shown a video and given a thorough explanation of the international law by the representative moderator. They then openly discussed how to apply this law in such a way that would comprehensively encompass all institutions and areas, including step-by-step procedures for introducing such a law in each region.

After carefully considering the specific characteristics of each of these regions, detailed plans were created. For example, representatives of the US Congress expressed the need for, as well as the process of, establishing a peace department within the US Federal Government that would be capable of drafting a law for peace and cessation of war in accordance with the principles of the DPCW.

At the same time, the Caribbean Organization discussed how to gain recognition for and implement the DPCW through the involvement of the High Court of Justice (SOLAC), including all the chief justices in the Caribbean region and the Attorney General, in the process of supporting this declaration. 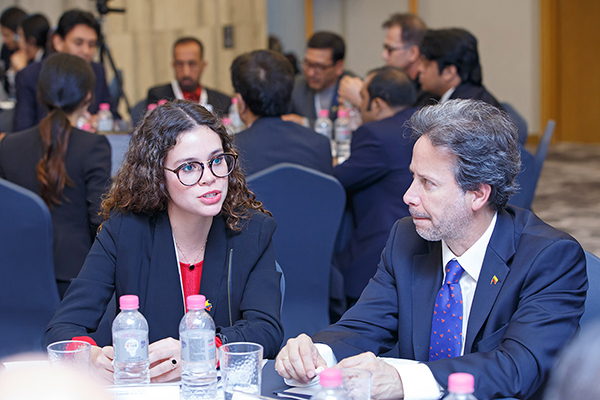 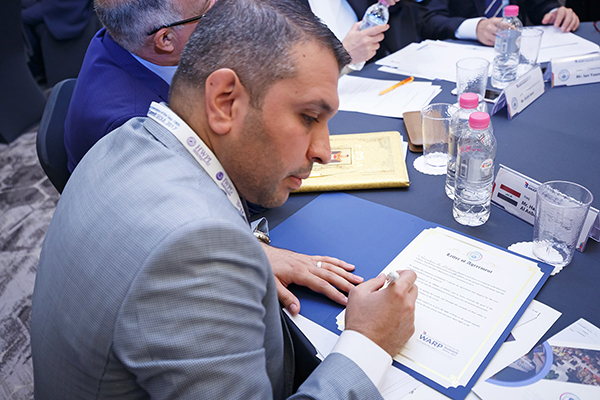 Under the theme of the activation of ‘Peace Guardians’, representatives of four countries, including Dr. Nestor Raúl Correa Henao, Executive Secretary of the Colombian Special Peace Jurisdiction, Ms. Sara Beltrán Flórez, Legal Advisor of the Colombian Special Peace Jurisdiction, Wali Mahmood Hamad, President of Koya University in Iraq, and Abraham Quadan, Executive Member of the Sydney Peace Foundation in Australia, came together to discuss future action plans for the Middle East and beyond.

The ‘Peace Guardians Program’ aims to utilize the contents of the DPCW and apply them within the participants’ own countries through the introduction of the DPCW, special lectures, group discussions, ceremonies for gathering signatures of support for the DPCW and directly incorporating these contents in future national projects.

With the topic of the ‘Successful case of implementing an ordinance or acceptance of an agreement between the government and civil society,’ Dr. Nestor Raúl Correa Henao, Executive Secretary of the Colombian Special Peace Jurisdiction shared about the successful cases of the implementation of the peace law in Colombia that carries out the same value of the DPCW to achieve world peace.

After this, the participants listened to a presentation regarding “The Need for Peace Guardians” given by Professor Abraham Quadan, Executive member of the Sydney Peace Foundation in Australia, who then proposed a system for establishing the program for Peace Guardians in each region respectively. Finally, all in attendance made a firm pledge to bring back the ideas and content of the discussions held during this conference to their home countries and dedicate themselves to promoting the concrete implementation. 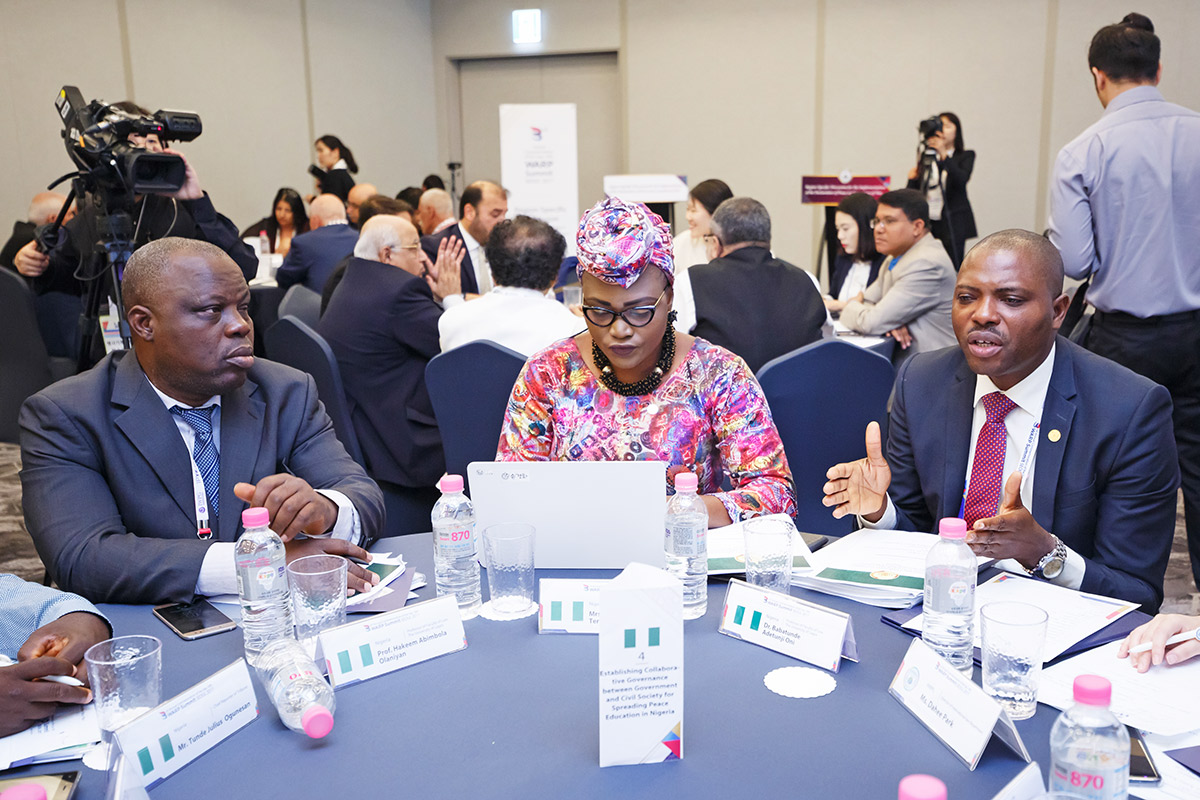 The country of Nigeria is composed of approximately 500 tribes consisting of around 250 different ethnic groups. Due to this vastly diverse ethnic composition, many conflicts arise in Nigeria because of the competing interests of these groups. In light of this, Babatunde Adetunji Oni, Professor of the Faculty of Law at the University of Lagos, who also attended the 2nd Annual Commemoration of the World Alliance of Religions’ Peace (WARP) Summit last year, emphasized that tribal and religious understanding is necessary in order to resolve the conflicts within Nigeria. He also pointed out that education is critical for achieving this.

Since this proposal, the Faculty of Law at the University of Lagos managed to gather 70 professors and numerous students from around the world during its two Symposiums on the Declaration of Peace and Cessation of War in order to promote its core values in association with peace education. In addition, they are currently promoting the integration of peace education into the curriculum for law professionals within the University of Lagos.

In order to achieve these goals, the table discussion held during this session focused on an analysis of what needs to be done in order to establish a system of peace education in the public domain, as well as a discussion of the role of the government.

This meeting was also attended by members from various sectors of society, including law professionals, youth, women and the media, and they actively shared HWPL’s recent and ongoing activities in Nigeria. HWPL members then proposed appointing three directions for the development of peace education in Nigeria: public education, secondary education and higher education.

In the following portion of this conference, those in attendance pledged their commitment to work together with HWPL for the establishment of peace education by returning to their home countries and executing the plans that were originated during the discussions.

“Discussion on the Roadmap to make the H.O.P.E. Program to be Officially Approved by the Country’s Government”
Representative country: Kenya 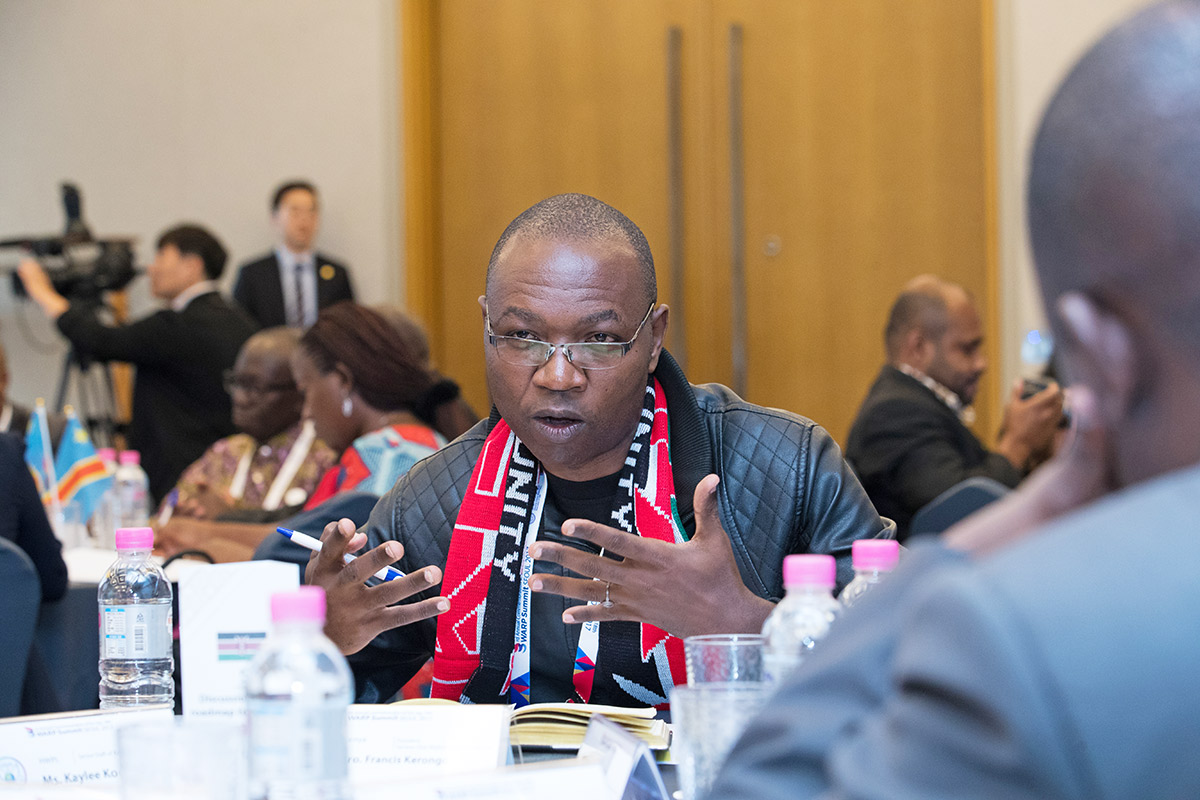 In Kenya, a conference was held under the theme of “Building a Roadmap for the Approval of the H.O.P.E. Program as a Formal Peace Education Course in the Region”, in accordance with the principles of the DPCW, at Kisli University. Up to this point, Kenya has suffered immensely from chronic problems, such as political corruption, tribal rivalry and general violent conflict.

However, unfortunately, older generations in the country do not desire peace between the tribes because they regard peace as simply a symbol of the economic ability of the wealthy and powerful rather than an ideal condition for society. In addition to this, many peace NGOs that are currently working in Kenya must deal primarily with survival-related problems, such as healthcare concerns like HIV/AIDs prevention, sanitation, malaria management and others, instead of actively working towards conflict resolution.

Under such social environment, it can be seen that youths in Kenya are the generation that has the ability to make a difference in the future development of the country. For this reason, they are the main targets of the program, which works to increase their ability to bring a future of peace that is desperately needed. College students from various backgrounds and tribes receive peace education within the university and learn to cooperate naturally with the diverse array of other students.

In this manner, they will be able to return to their original communities with the values and ideas gained through the peace education and experiences from the university and spread the culture of peace.

The participants at this roundtable discussion expressed their opinions regarding the implementation of the program and discussed how the program could be developed into a formal peace education course that is officially approved by the Kenyan government. 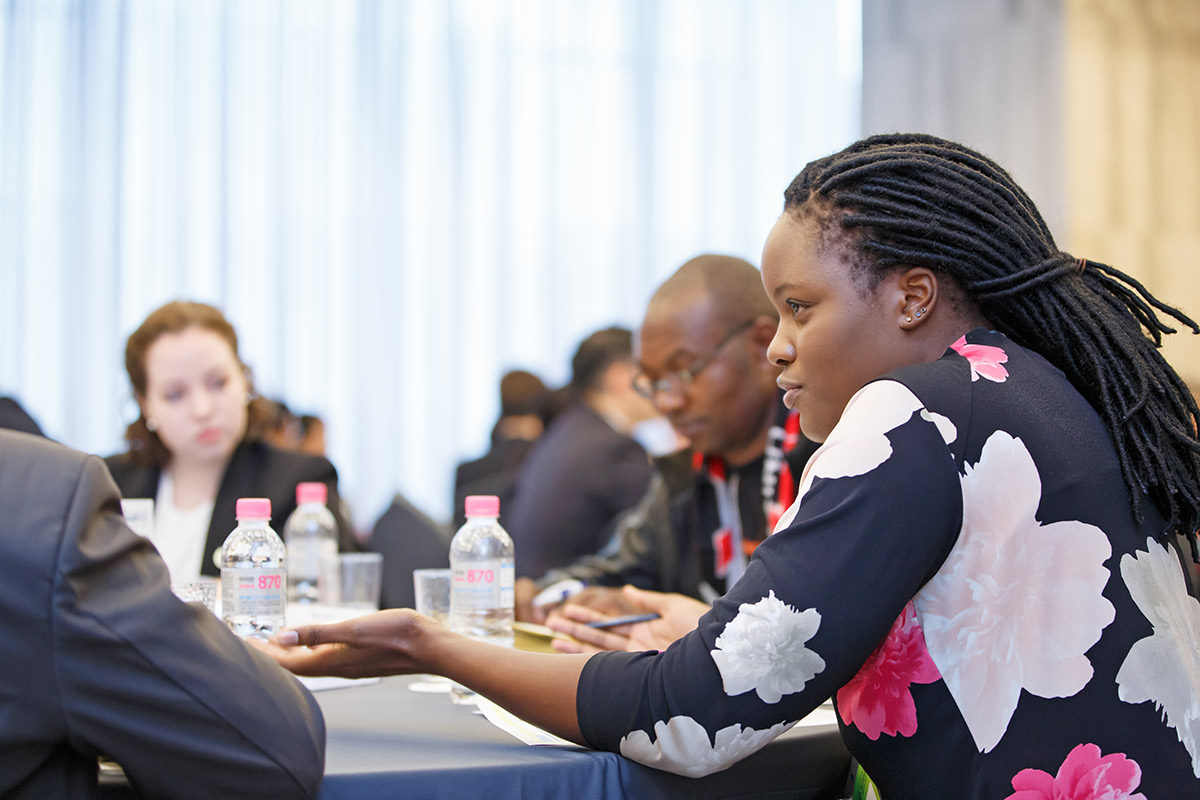 The results of their discussion are as follows.

In order for the H.O.P.E. program to be certified by the government, it is imperative to first establish it as an effective program for college students. It is quite difficult to gain approval for a program at the governmental level, but if the program is already implemented and spread throughout the youth, the speed of this process will be greatly increased through word-of-mouth awareness-raising to gain additional support. At the same time, an HWPL Peace Club should be established on the campuses in order to conduct seminars for introducing and educating the main values of the DPCW.

This would then allow students to plan their own activities while still incorporating those key ideas expressed in the seminar. The peace clubs would be free to engage in activities with various themes and contents, but they should have a common guideline that is in accordance with the principles of the DPCW. In addition to the existing seminars, these peace clubs are supposed to create new, individualized seminars that reflect the core values of the DPCW in a way that customizing to the specific environments and audiences for more effectiveness and stronger engagement.

Overall, the H.O.P.E. (Hour of Peace) program consists of peace seminars and activities that provide basic education of the core values of peace, which include understanding, equality, sharing, cooperation and others, as well as activities that promote practical peace within the community.

Further to above elaborated contents, there were various additional regional discussions for peace with diverse themes and agendas specific to each area; such as the regional discussion regarding the need for a concrete peace policy in Malaysia, the regional implementation of the DPCW through the creation of a South Pacific Peace Zone, and the future of youth in Palestine under the programs supporting a partnership for peace in Palestine. These topics were actively discussed by all participants at each table.

In the end, all in attendance promised to return to their home countries and produce practical results based on the collective idea being shared and created through the discussion of this conference. HWPL is sincerely and strongly looking forward to the development and further formation of international network for active implementation of all the peace projects and for true realization of peace in the world.