Skip to content
Previous
Next
Published On: February 27th, 2021

The Efforts of Religious Leaders for a Better World

There are many religious leaders cooperating with HWPL for various peace activities. They make up almost 17% of HWPL’s peace messengers, working tirelessly for peace amongst religions through their active participation in the World Alliance of Religions Peace (WARP) Offices’ dialogue of scriptures. Since the very first WARP Office in Irvine, United States in October 2014, there are currently a total of 253 offices in 129 countries. Each WARP office runs dialogue sessions at least once a month. In addition, there are various educational activities and seminars conducted in the HWPL Religious Peace Camps where civic society joins in to gain a better understanding of the different religions and thus spread a culture of peace in their communities.

Starting in 2020, the Covid-19 pandemic brought upon an unprecedented challenge to people around the world. Many had to face the daunting reality of overcoming a global, virulent outbreak without any vaccines or viable treatments. Many also lost their loved ones and neighbors, and many also lost their jobs in the midst of diminished economic activity on a global scale. The peace work undertaken by religious leaders working with HWPL could not avoid these overwhelming changes as well. WARP offices, religious peace camps and other peace activities had to be moved online and required more ingenuity in reaching out to those in crises and to provide much-needed comfort.

During 2020, HWPL held 27 online peace conferences, big and small, where a total of 522 participants of more than 36 religious affiliations and 92 countries gathered to pray for a quicker end to the pandemic and for the world to be given the wisdom and strength to overcome the struggles and trials. One noteworthy gathering was held on 14th December, titled, “United Hopes & Prayers for a Brighter 2021.” In this special occasion, a total of 258 participants attended the online prayer conference. 11 religious leaders representing 9 different religions led the participants in prayers according their own religious ways. All who participated prayed with one heart and mind. 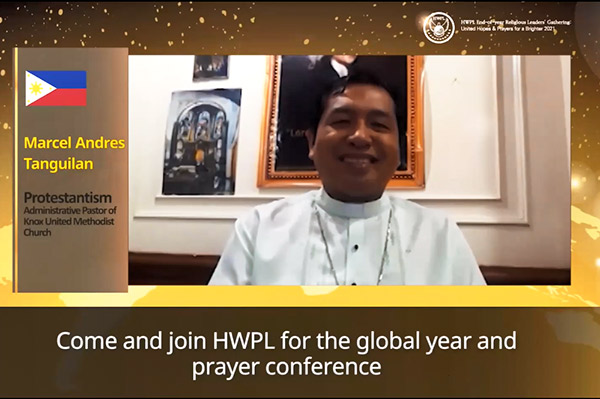 Reverend Marcel Andres Tanguilan of Knox United Methodist Church from the Philippines who attended the prayer conference commented, “the unity of the religious leader in prayer to end the COVID 19 is a victory. I am positive that God almighty will hear our prayers this night. The barriers between religious leaders are gone because of the work of HWPL.” Mr. Sumit Kumar Monga of the Committee of Hindu Sanatan Mandir in Norway also added that “(it is) a living proof of HWPL’s slogan “we are one”, when religious leaders from different faiths chant their prayers and being appreciated by one and all. So many good hearts at one place.”

The prayer conference joined by hundred of religious leaders who prayed in earnest for the health and safety of the many is an excellent example of how HWPL had evolved in the times of the pandemic to transcend religious and denominational lines to carry out peace activities.

Due to the nature of the religious peace camps, it was difficult to gather many people in one place. Nevertheless, the challenges that arose did not dampen the enthusiasm of HWPL peace messengers who worked hard to spread the culture of peace throughout civil society. On July 5th, 2020, the HWPL Online India Religious Peace Camp was held in Mumbai, India in cooperation with the Kaash Foundation, an NGO based in Mumbai. At the religious peace camp, religious leaders and youths gathered to share and learn about each other’s cultures, the histories of the different religions and more, with the aim to achieve peace in religions. Each religious peace camp conducts various programs and activities suited to the host country and participating religious groups.

In this particular religious peace camp held in Mumbai, roughly 100 youths from various Indian cities participated online to study the purpose of religions, and its role in achieving peace and social unity under the theme of “Understanding Religion.” Dr. Kamini Gogri, Head of Research in Ancient Scriptures, Eikam Resonance Foundation, spoke in her speech, emphasizing the importance of recognizing and respecting differences. She explained that “understanding religion is to understand and realize the thought process evolved through the ages. To recognize and respect differences is a valuable gift.” Pastor David Jessuhu from the Navigator Ministry in Delhi also shared that “in order to prevent religious conflicts and disputes, we must find a solution which is fundamentally based on understanding religion and we need to put it into practice,” thus stressing the importance of resolving religious conflict through a proper understanding of religions and putting it into practice.

HWPL WARP Offices were launched to tackle the difficult task of achieving true religious harmony through comparative study of scriptures by religious leaders and scholars. Since its start in 2014, there have been more than 10,000 dialogues of scriptures held. The reason for conducting the dialogues of scriptures whereby panelist discuss and compare the different religious texts is to achieve advanced, substantive discussions and understandings that go beyond superficial harmony and pleasantries.

Participants gain a deeper understanding of each other’s core doctrines, while laying down any unfounded fears that arise from a lack of knowledge of the other, and thus the risk of extremism and coercion. Truth is pursued through deep dialogue and discussions based on each scripture. Through these efforts, we are able to work towards a future with lasting peace which is a common teaching of religions.

Topics mainly covered in the WARP Offices include subjects like all creation in the world, the beginning of Man, creation, end times, scriptures, religion and its history, the use of figurative language, key figures in religious texts and about the world that we are living in.

At this point, we would like to introduce the South Africa Johannesburg WARP Office, which held its dialogue over September and October 2020 with the topic of “Figurative language in Scriptures.” In response to the question, “What is the most misunderstood metaphorical language in your scripture / teachings?” the four religious leaders answered as follows:

(Sunni Islam) Sheikh Aman Ntiya explained that there are no misunderstandings within the Holy Quran and that the teachings in the Quran are loud and clear. However, the misunderstandings that people have are largely due to inadequate knowledge about the scriptures. “And certainly We have revealed to you (Muhammad PBUH) clear communications and none believes in them except the transgressors” – Quran 2 verse 99

(Buddhism) Ngodup Dorjee explains the concept of Suynata or “Emptiness” which is a central teaching of Buddhism. However, its true meaning is often the most misunderstood. Emptiness is not a complete negation of existence. This would be a nihilistic view contrary to common sense. What it does mean is that things do not exist the way our self perceives them to be. In his book on the Heart Sutra, the Dalai Lama calls emptiness, “the true nature of things and events,” but in the same passage he warns us, “to avoid the misapprehension that emptiness is an absolute reality or an independent truth.” In other words, emptiness is not some kind of heaven or separate realm apart from this world and its woes.

(Hinduism) Guru Kiritbhai Acharya answered that Hindu gods are depicted as having many heads or hands to emphasize their strength and power. Each represents a certain quality or value. The symbolic meaning must be explained and understood. For example, Mother Lakhsmi’s four hands represent the four aspects of human life important to Hindu culture: dharma (duty), kāma (desire), artha (purpose), and moksha (liberation).

(Christianity) Pastor Wilson Wandawanda explains that metaphorical language in the bible is often misunderstood. An example of this would be the word “seed.” It is often misunderstood to mean “money” and therefore is often used to promote the notion of ‘prosperity.’ This in turn has caused Christianity to be perceived as a ‘prosperity’ religion. In Luke 8:11, it is clear that the seed is meant to represent the Word of God.

In this imperfect world, there are many ongoing wars and the freedom of many people are still being repressed in certain countries while others are also suffering from the wide-ranging effects of the pandemic. At first glance, the utopian world with lasting peace seems so far away. However, religious leaders who are always working to lead their followers on the right path will not give up easily on their path to peace and back down in the face of obstacles. Their uplifting work are an important pillar of HWPL’s peace movement. We are sure their efforts will continue to illuminate the path to peace in the future.