Skip to content
Previous
Next
Published On: October 27th, 2017

Together We Make a Difference – Behind the Staff Story

The World Alliance of Religions’ Peace (WARP) Summit, which was first held in 2014, has been convened annually in South Korea. Each year, political, social, and religious leaders as well as experts from youth and women’s organizations, civil society actors and the press attend the Summit to discuss practical ways of achieving peace. Also, at an outdoor stadium, a peace festival is held, featuring IPYG’s card-section performance, a peace parade, various art performances, and speeches made by former and current heads of state and other leaders from around the world. 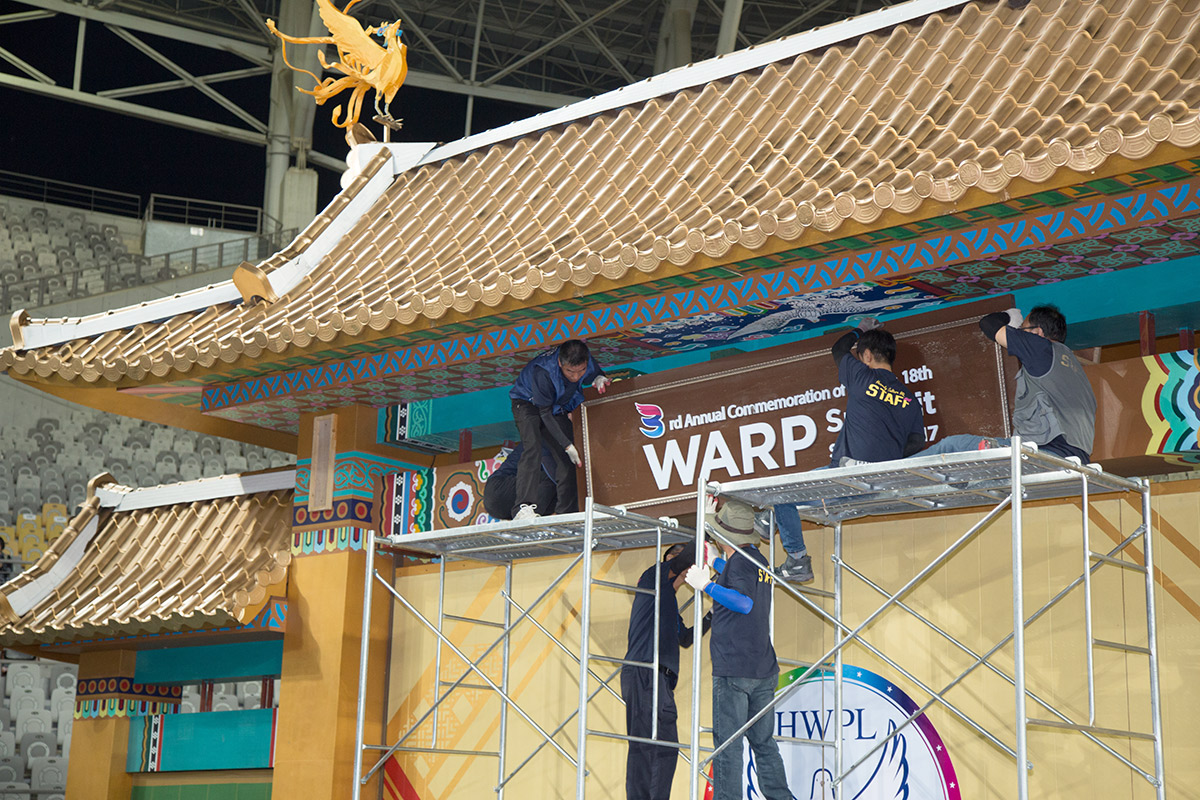 This year, HWPL hosted the WARP Summit for the fourth year in a row, and has been acknowledged as an exceptional organization for its ability to plan and organize this annual peace event. The event is supported by a large number of planning team members and volunteers each year. For the Summit, which lasts for a period of three days, various types of staff members are needed. Professionals and volunteers participate in the Summit by providing support in the fields of program planning, management, translation, medical services, video recording and editing, photography, art, design and installation, performance, and more.

HWPL is often asked by many of the participants how they prepare the WARP Summit, especially regarding planning and organizing.

The staff members who planned and participated in the 3rd Annual Commemoration of the WARP Summit talked about the preparation process and various episodes that occurred in the time leading up the event.

Since the WARP Summit is an international event, there is a special focus on translation services, which enable participants of various nationalities to clearly understand the discussions held at each meeting. Mainly there are two types of translation: simultaneous translation of speeches and discussions that is provided through translation booths and protocol officers’ translation given for individual participants. For over 1,000 people from 120 countries who attended this year’s 3rd Annual Commemoration of the WARP Summit, translation was provided in fifteen languages, eight of which were received through specified channels and the rest given live on site.

Translations done in the booths are mainly provided for session speeches and discussions, so all the translators need to do a lot of research about the speakers, discussion topics, and current international issues and continuously study and review these materials thoroughly. Without a firm understanding of the related terms and issues, it is difficult to translate clearly and accurately.

Thanks to the volunteer translators who made efforts as great as the experts who participated in the peace event, everyone could communicate well without being restricted by language barriers. When the meetings came to an end, the translators monitored their translations, getting prepared for next year’s Summit already.

Those who experience HWPL’s peace festival compliment the event for its organizational and artistic aspects, as well as the orderly manner in which it proceeds. Participants even promote and boast about the event when they return to their home countries.

This year’s outdoor peace festival was held at the Sports Complex in Gyeonggi Province, Korea. Under the theme, “Peace, Cessation of War, and Reunification of the Korean Peninsula”, parades, a card-section performance, and arts performances were held for all guests to enjoy.

The magnificent peace parade showed how global peace is being achieved in accordance with the 10 articles and 38 clauses of the Declaration of Peace and Cessation of War. The organizer of the parade said that he put a lot of effort into creating a scene where tanks and various weapons are converted into farming equipment and everyday tools, which was inspired by Article 2 of the Declaration. Also in the parade, there were tanks shooting flowers, children from around the world encircling the earth, traditional folk dances from various countries, students of the Peace Academies, and more. It was a unique and impressive parade that could not be seen anywhere else. 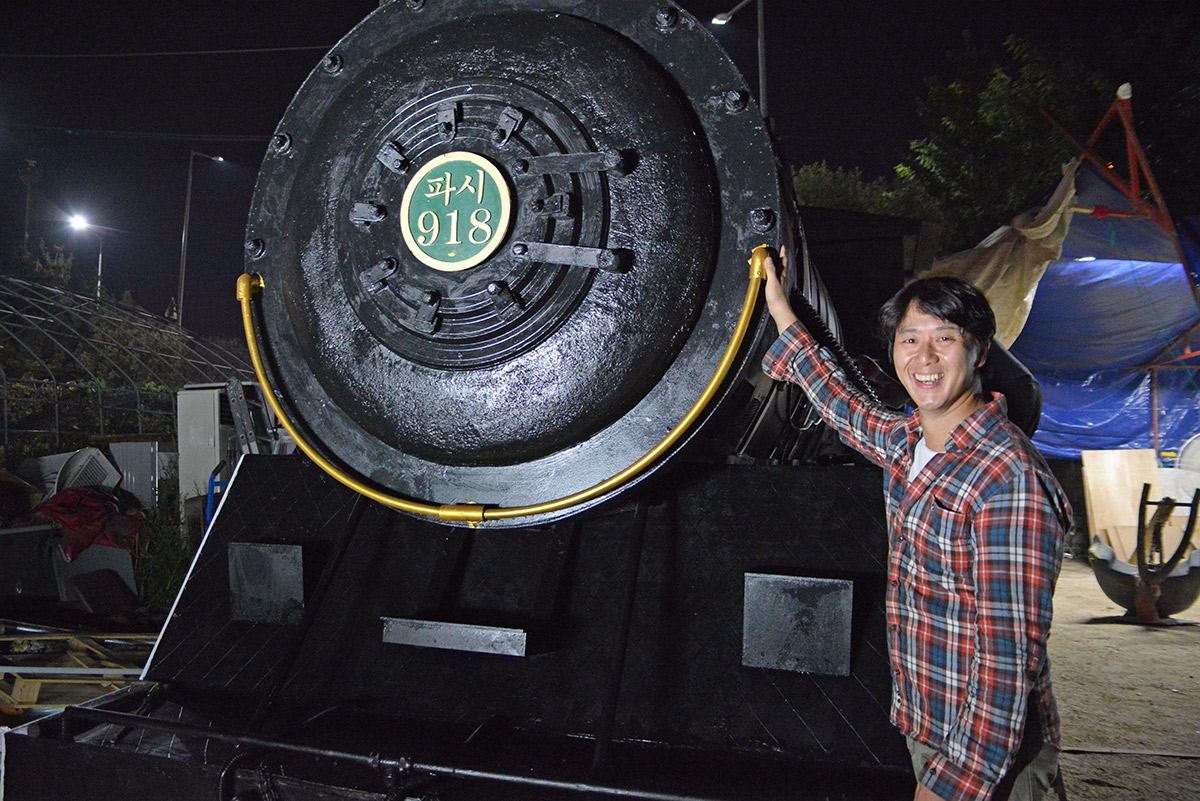 Dongwoo Han, the head of the Parade Art Production team said, “In the case of the tank, a key point to take notice of is how the cold and lethal weapons of death are transformed into agricultural tools that help people and give them joy. So, it becomes a world where there are no longer any weapons that kill people. In the case of the unification train, it shows how the unification of Korea, which is the world’s only divided nation, is able to give hope. This is symbolized by the creation of a unification train which would allow people to go anywhere, not caring whether it is in the South or the North.”

The card-section team eloquently displayed the slogan of this year’s Summit, “TOGETHER FOR PEACE AS MESSENGERS OF PEACE”, as well as HWPL’s message of peace, through their card-section performances. The team also welcomed and thanked the speakers for joining the festival by displaying their portraits and home countries. In this large-scale card-section performance, a total of 6,635 people participated in the event itself, and 388 staff members spent much time before the event working together to plan the performance.

The event’s finale was the “Arirang of Peace” performance, which incorporated traditional musical instruments, dances, songs, a color guard, and martial arts stunts from the art performance team. The traditional performance and dance that involved traditional fans, drums, and flags captivated the entire audience of 50,000 participants. Going along with the lyrics of “Arirang of Peace,” it was like seeing the blueprint of a new era and “entering the new world of peace” that is without war and terrorism. 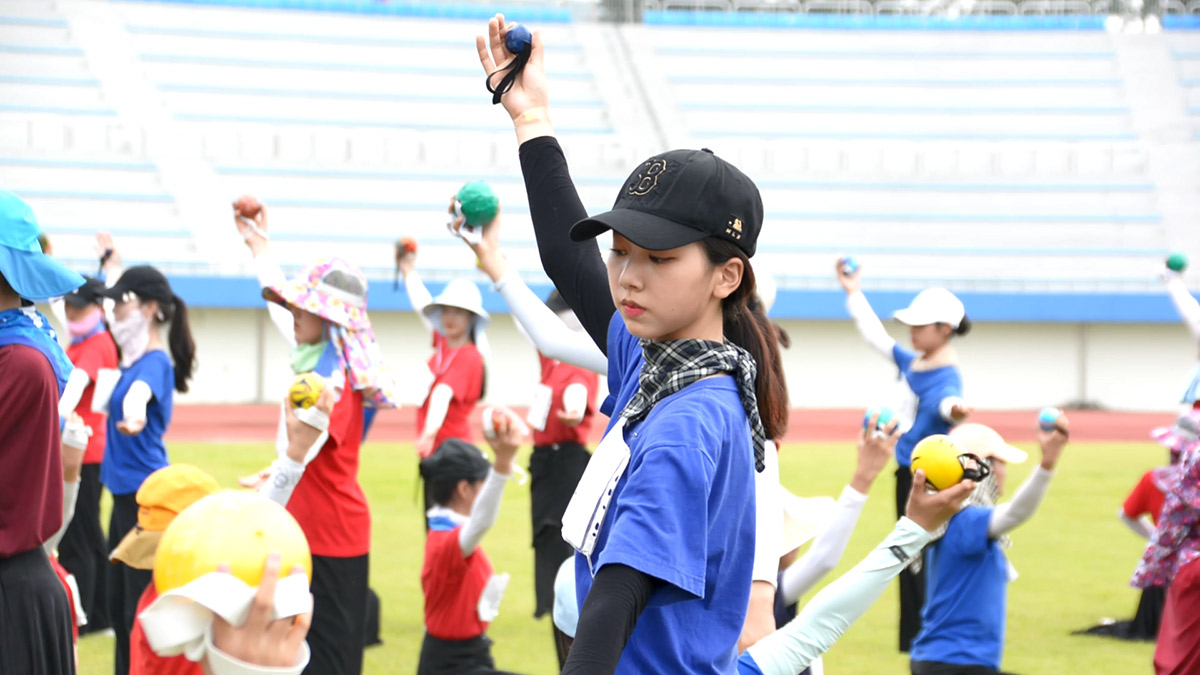 A member of the Arirang of Peace Performance Team, Hyunji Kang, said “It is during the performance of Ganggangsullae, a traditional Korean dance, in the Arirang of Peace where one of our team members steps across the connected backs and shoulders of the others. This clearly demonstrates how a beautiful reality of peace is achieved through the combined sacrifice and effort of everyone involved.

She added, “Therefore, during practices not even one person could think selfishly, but instead had to willingly lend their back and shoulders. So, we carefully practiced with the mindset that I myself must hold hands and create peace along with everyone else.”

World peace is not a vague dream but rather it is truly our collective responsibility. Now is the time for all people of the world to become one and show the power of peace.

Volunteers who take part in the WARP Summit do not sit back waiting for a world of peace to come, but rather they come forward to create such a world with their own hands. As the staff and volunteers dearly hope, the WARP Summit will continue to create peace beautifully.