Skip to content
Previous
Next
Published On: September 7th, 2016

WARP Summit 2016: Passing on to Successive Generations a Legacy of Peace 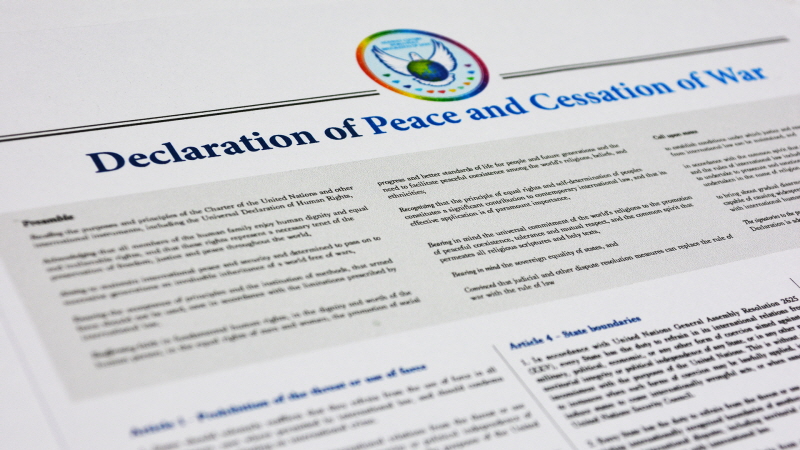 Essential to providing social cohesion at all levels through a comprehensive legal infrastructure, HWPL has played a leading role in drafting the Declaration of Peace and Cessation of War (DPCW) which aims for a cessation of all armed conflicts. By the means of prohibiting weapons and transforming them into daily tools, DPCW provides a revolutionary instrument of rules to reach sustainable peace.

Acknowledging and ensuring the core principle of the Declaration: to pass on to successive generations an invaluable inheritance of a world free of wars, nearly 1,000 figures are gathering for the upcoming 2nd Annual Commemoration of September 18th WARP Summit to thoroughly discuss the detailed plan of actions on the endorsement of legislation of peace through advocating the document.

The Declaration of Peace and Cessation of War (DPCW) urges the world to advocate making peace as a sustainable environment to protect the legacy for future generations by maintaining the state of non-violence through preventing and mediating factors that influence conflict and tension.

The declaration, in particular, transmits the core principles to maintain peace like restraint of armed force specified in the UN Charter and Universal Declaration of Human Rights; further, it offers the practical approach to peace building targeted to overcoming conflicts occurring today by addressing the responsibility of the global community in cooperation for peace.

Article 1: Prohibit the threat or use of force 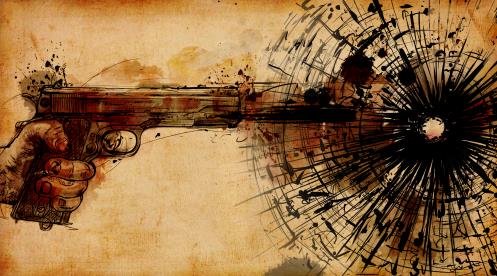 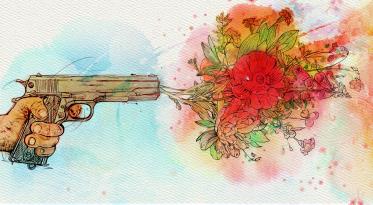 Article 1 addresses the prohibition of the use of (military) force between states, which is affirmed and further exemplified in the call to respect the territorial integrity of a state. According to Article 2 of the UN Charter, states refrain from the use of force that can degrade the purposes of the UN, maintaining peace and security in our globe.

Still, violence and conflicts for the last decades have raised questions about the applicability of this principle. To further develop and protect the international system of peace designated in the UN Charter, the DPCW reaffirms that aggression should be condemned as an international crime and demands that states are responsible for prohibition of violence promoted by any individuals or organizations. 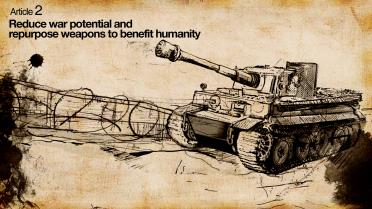 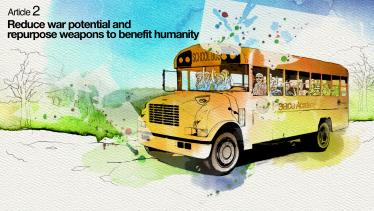 This is a more fundamental, developed approach from how to resolve conflict and reduce ensuing damage to how to achieve peace before the conflict leads to war. The most practical mechanism of peace and prevention of war potential is an agreement and respect on cessation of war in the international society as a whole.

Refraining from the use of force should not mean elimination of all the human or material resources. Rather, constructive form of disarmament should be based on transformation of the resources to benefit the community. 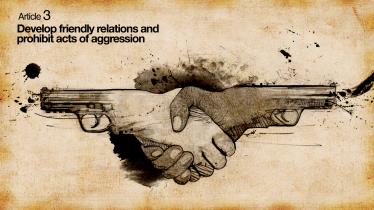 Article 3 deals with details on the role of states in enhancing friendly international relations and prohibiting acts of aggression. The legitimacy of states making efforts to promote better relations among states for peace is based on the recognition of mutual respect presented in the UN General Assembly Resolution 2625. Specifically, the article emphasizes that illegal occupation of territory with the use of force and oppression of people should be highly discouraged.

In history, waging wars can be determined by decision making process from a specific individual or group without agreement from people in the society. According to this article, not only international law but actors of society including states, citizens and organizations play a crucial role in regulating and monitoring acts of aggression, so that maintenance of peace through blocking the possibility of war and conflict can be constructed. 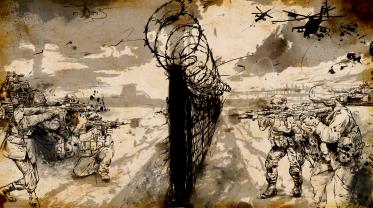 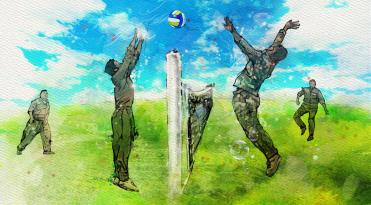 Article 4 describes how states can contribute to deterrence of violent actions in the international society and the establishment of an environment of peacebuilding, especially stating possible acts of aggression in the multilateral scope. (“by a state, a group of states, an organization of states or an armed group or by any foreign or external entity”)

It should also be noted that the form of coercion includes not just the use of armed force but other sources of threat including economic and political means. Accordingly, with understanding today’s interdependent world as a global village resulting from diverse human interactions and material exchanges, the article provided a timely, accurate access to peacebuilding in terms of the fact that discreet approaches and decision making by states are required to restrict proliferation of conflicts and settle disputes in peaceful means.

Article 5: Ensure the Right to Self-Determination of Peoples or States 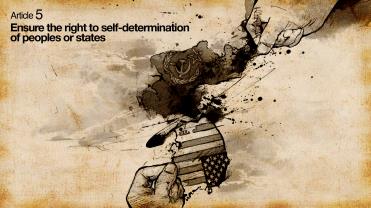 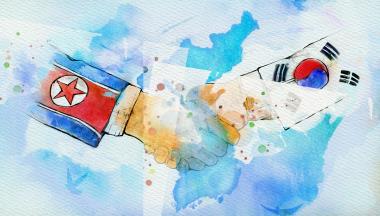 The right to self-determination is well-mentioned in the Charter of the United Nations and was also affirmed by the majority of states in the General Assembly (Resolution 2625 (XXV)). The essence of self-determination is fair and equal opportunity to make decisions of the destiny of a community. To achieve this, the will of the people should be reflected by the national system or governmental bodies and any form of political system that stands against the popular will or opinion should not be accepted internationally.

Also, self-determination necessitates global cooperation in order to protect the principle, since it determines the direction and future of community where sufficient discussion and communication in society are highly encouraged. The Korean Peninsula is a typical example of this. As the global community can support making a peaceful environment in the region through interactions and communication with the principle of self-determination, one of the most dangerous regions can be transformed into a reality of peace in this world.

Article 7: Acknowledge the Right of Self-defense

When armed attack against a state occurs, the right of self-defense (légitime défense in French and legítima defensa in Spanish) can be applied and the Security Council of the United Nations takes measures to maintain international peace and security. Self-defense as an appropriate response to illegal acts of violence against a state can be taken collectively, meaning that states can cooperate with each other to prevent illegal acts of violence and protect international security.

Measures taken for self-defense should be reported to the Security Council to effectively cope with collective response to threats and support international peace. 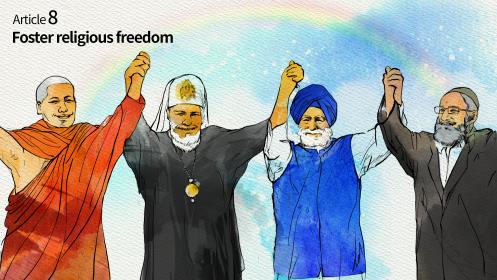 Articles 8, 9 and 10 of the DPCW delineate the means to restore, cultivate, facilitate and enhance the spirit of peace in this globe. In article 8 “Freedom of Religion”, as freedoms are set forth without distinction of religion in the UN Charter, states are responsible for protecting the pursuit of faith, overcoming conflicts caused by misunderstanding and prejudice in religions through promoting interfaith communication, and supporting the active role of religion as a bridge-builder of creation of the world of peace, designated in scriptures as instruction.

The freedom of religion shall be actively protected by states and must not be used as grounds for conflict and/or acts of violence. These contain the rights to adopt, change or renounce a religion or belief, the freedom to manifest one’s religion or belief, the freedom to worship and the protection of places of worship, religious symbols and observation of holidays and days of rest. States must refrain from coercing a religion. 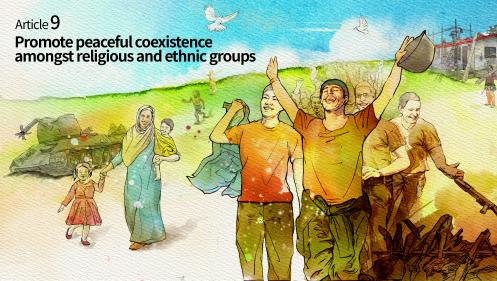 In article 9 “Religion, Ethnic Identity and Peace”, states should develop devices that facilitate multilateral consultations and encourage legal measures and social policy for religious and ethnic harmony. Also, legal basis for prosecution and punishment against organizations that promote conflict and violence in the name of religion should be founded.

Article 10: Spread A Culture of Peace 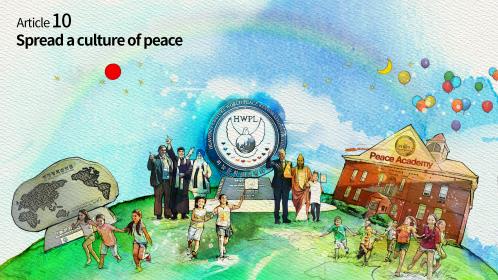 In article 10 “Spreading a Culture of Peace”, raising awareness for citizens to develop recognition of peace through education, activities and commemorations is highlighted. Culture facilitates interactions in the community. There is legitimacy of our cooperation for cessation of war and world peace.

When the global community becomes one with the spirit of peace that never fades away in every individual’s heart, the culture of peace will bind us together and facilitate the achievement of the sustainable development goals provided by the United Nations for the common interest that benefits every citizen in our world. The welfare of humanity is dependent on how we can hold our hands together for peace in our times.