The family of peace, who have long awaited this moment, shouted out the
count down and cheerfully greeted the opening of the Peace Festival for the 3rd Annual Commemoration of the World Alliance of Religions’ Peace (WARP) Summit.

The card-section and various other performances aroused even greater joy at the festival, and the 35,000 participants in attendance, both domestic and from overseas, waved their world flags throughout these cultural events. 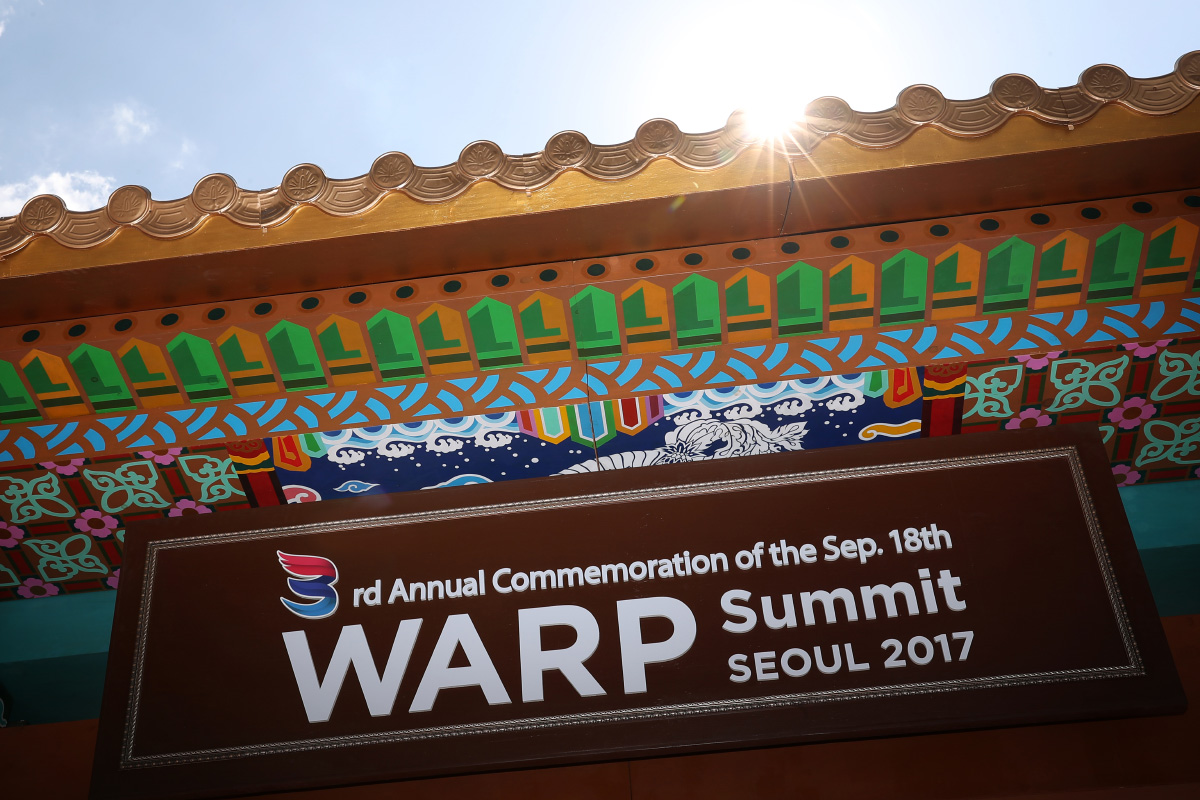 The Gate of the Peace, the representative symbol of the WARP Summit, had finally opened and leading figures from around the globe entered alongside children, who are the future proponents of peace, transcending differences in national borders, religions, and ideologies. The breathtaking entrance appeared to represent the beginning of the new era of no war, which is the ultimate dream of humanity.

The Gate of the Peace itself symbolizes the opening of a new era of peace by overcoming the crises faced by humanity that are caused by the threat of terrorism and by resolving the fundamental problems that scar the international community through the answer to peace.

Members of HWPL gave great cheers and applause with huge excitement as each figure made his or her entrance.

Entrance Ceremony of All Sectors of Society 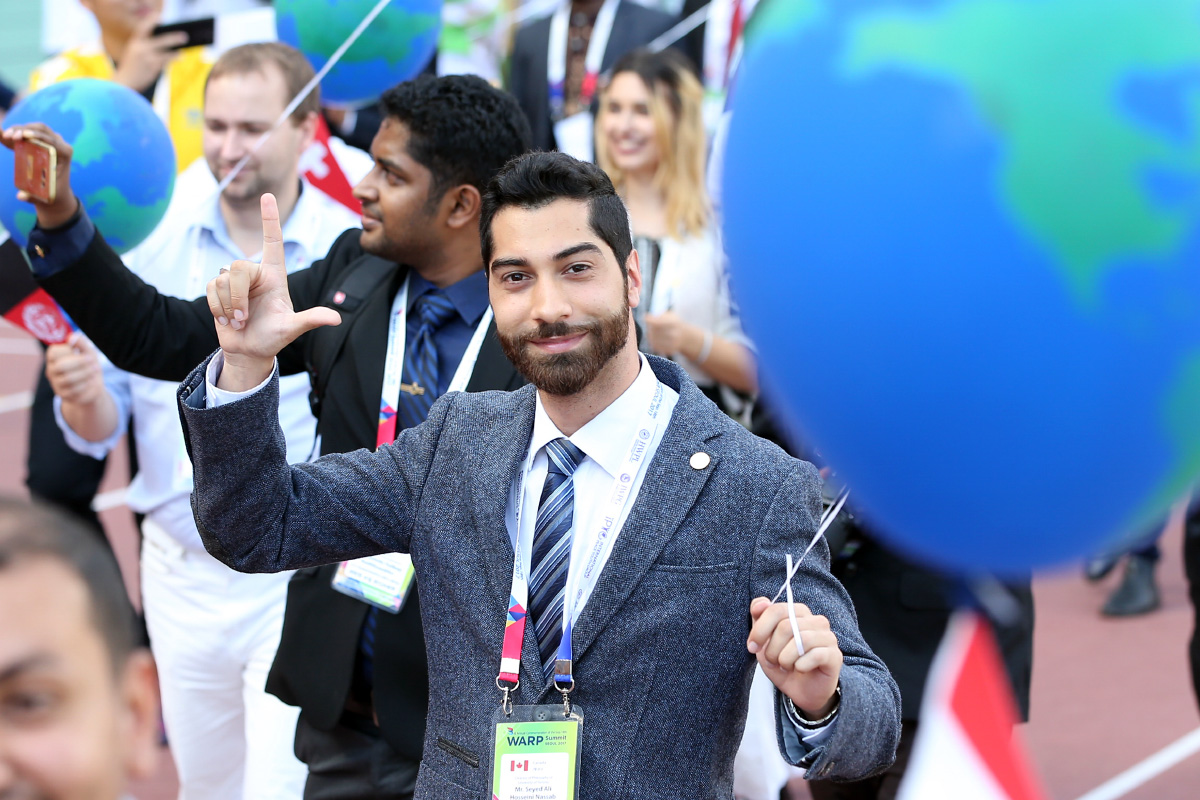 First, members of the International Peace Youth Group (IPYG) entered. These youth are our future. Those who are educated in the value of ‘the Sanctity of life,’ ‘Loyalty and Filial piety,’ and ‘Coexistence and Sustainability’ go on to implement these peaceful means of coping with conflicts in relationships among people, groups, nations, and even at the international level. The youth who have taken charge of creating the future of peace, representing all youth around the world, took a strong first step forward.

Next, the International Women’s Peace Group (IWPG) and the leaders of women’s groups and organizations who are working to achieve peace made their entrance. They are those who unite the 3.6 billion women around the world and advocate for the legislation of the International law. With their maternal heart, they continue the peace work for the purpose of passing on peace to future generations. 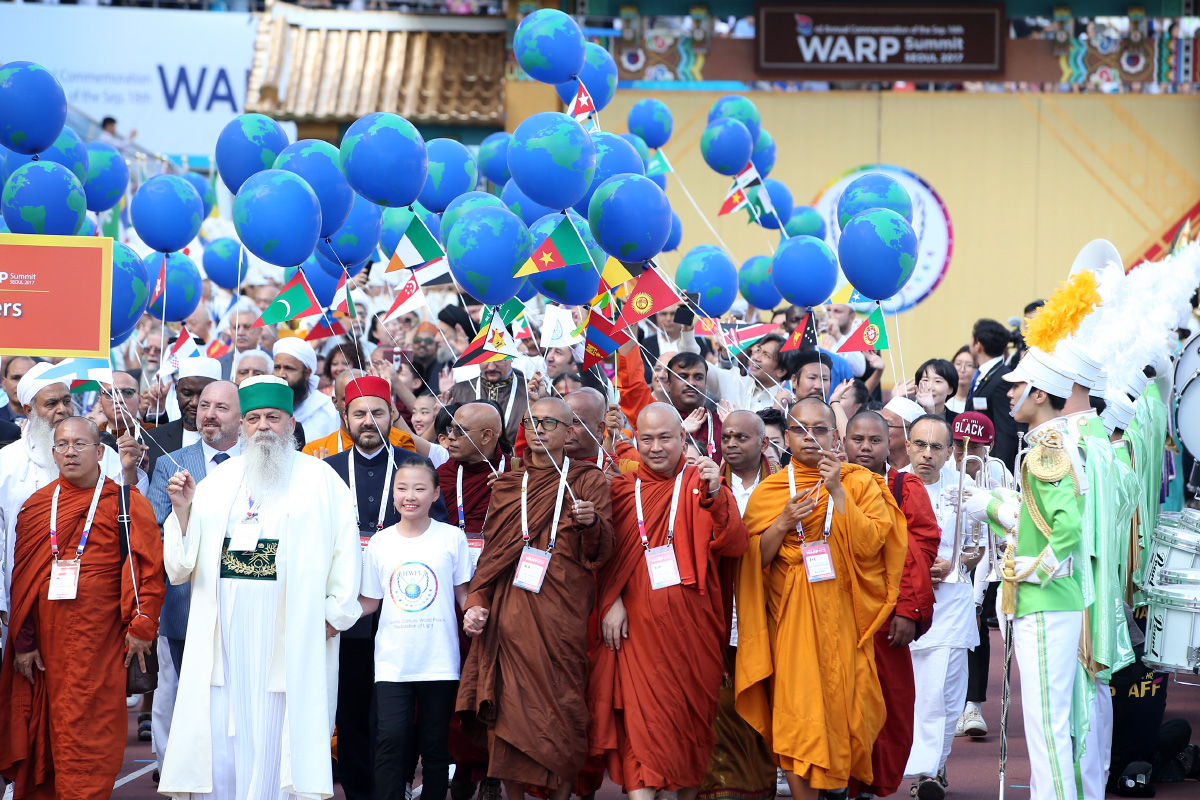 Following behind IWPG, came the religious leaders. Although diverse gods and scriptures exist, the ultimate goal of each religion is the same: peace. On this day, the religious leaders, in pursuit of world peace and unity, held each other’s hands with honest and humble hearts and a longing to fulfill their calling.

Next, political leaders, including heads of States and ministers, entered along with the HWPL International Law Peace Committee. These leaders, who protect the security and wellbeing of citizens, held hands together as they walked in with the united goal to legislate peace. They have gathered to implement the DPCW, which will become the foundation of eternal peace, establishing safety in the world.

The final entrance was made by Mr. Man Hee Lee, the chairman of HWPL, and Ms. Nam Hee Kim, the chairwoman of IWPG, officially closing the entrance ceremony. They have continued the groundbreaking work of achieving peace by cooperating for peace with the figures who had previously entered, legislating the international law for world peace and cessation of war, and running the annual WARP Summit for the reconciliation of religions.

Global leaders who have a strong affiliation with and affection for their nations and citizens participated with the conviction that peace can be passed down to future generations. The entire global family witnessed the peaceful scene of the entrance ceremony with the sincere and humble-hearted participants coming together transcending the differences of nationality, religion, ethnicity, and language.

At the 3rd Annual Commemoration of the WARP Summit, over 150,000 people from more than 120 countries participated simultaneously, and 6 leaders representing political, religious, and civil society sectors gave truly inspiring presentation at the main stadium. The main points of these speeches were regarding the importance of peace education and the establishment of collaborative peace governance.

The level of awareness of people around the world has grown, as well the influence of the WARP Summit and HWPL in peace work. This era requires the establishment of collaborative peace governance among governments and NGOs and the formation of a comprehensive peace network for all members of society to join and work together for peace. 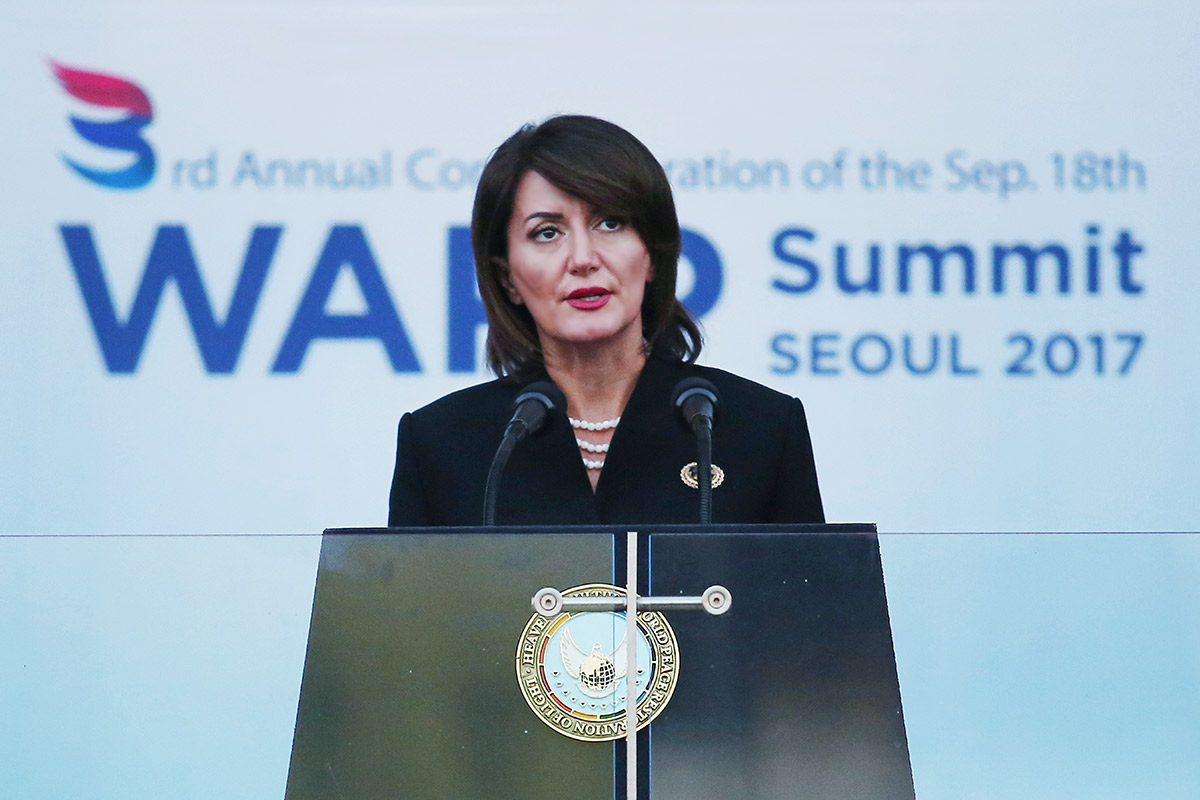 H.E. Atifete Jahjaga, Former President of the Republic of Kosovo said, “I can’t think of a better place to offer my thoughts on peace and peace governance than in Seoul,” sharing her gratitude for the WARP Summit being hosted in Seoul, the place from which the country has grown after the painful Korean War. 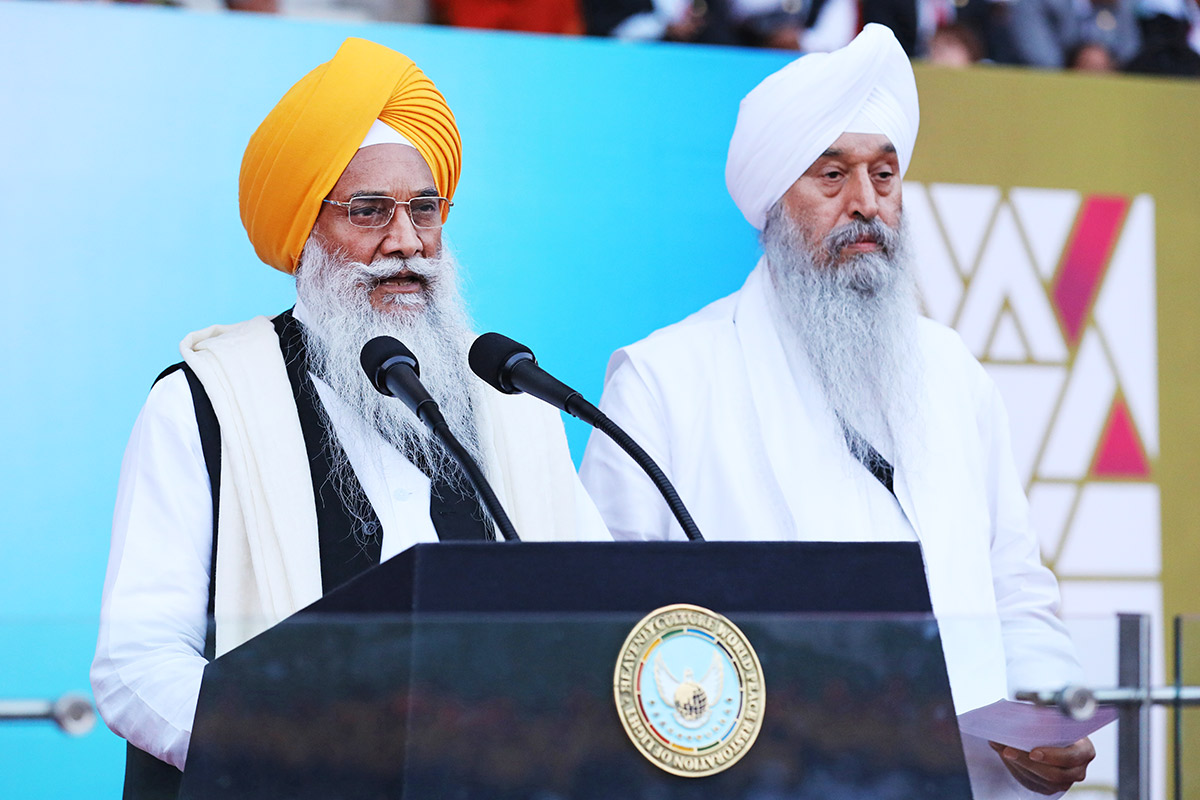 H.H. Singh Sahib Giani Gurbachan Singh Ji, Jathedar of the Golden Temple of India, has been supporting HWPL peace activities since his participation in last year’s Summit and has been actively cooperating to realize the alliance of religions stated in Article 9 of the Declaration of Peace and Cessation of War (DPCW).

Through his congratulatory message, he stated, “HWPL plays a very important and needed role in establishing this network and peace governance between governments and civil society actors throughout the world. It is something that must be accomplished with the collaboration of all individuals around the globe, including political and religious leaders, heads of women and youth organizations, civil society actors, and worldwide press.” 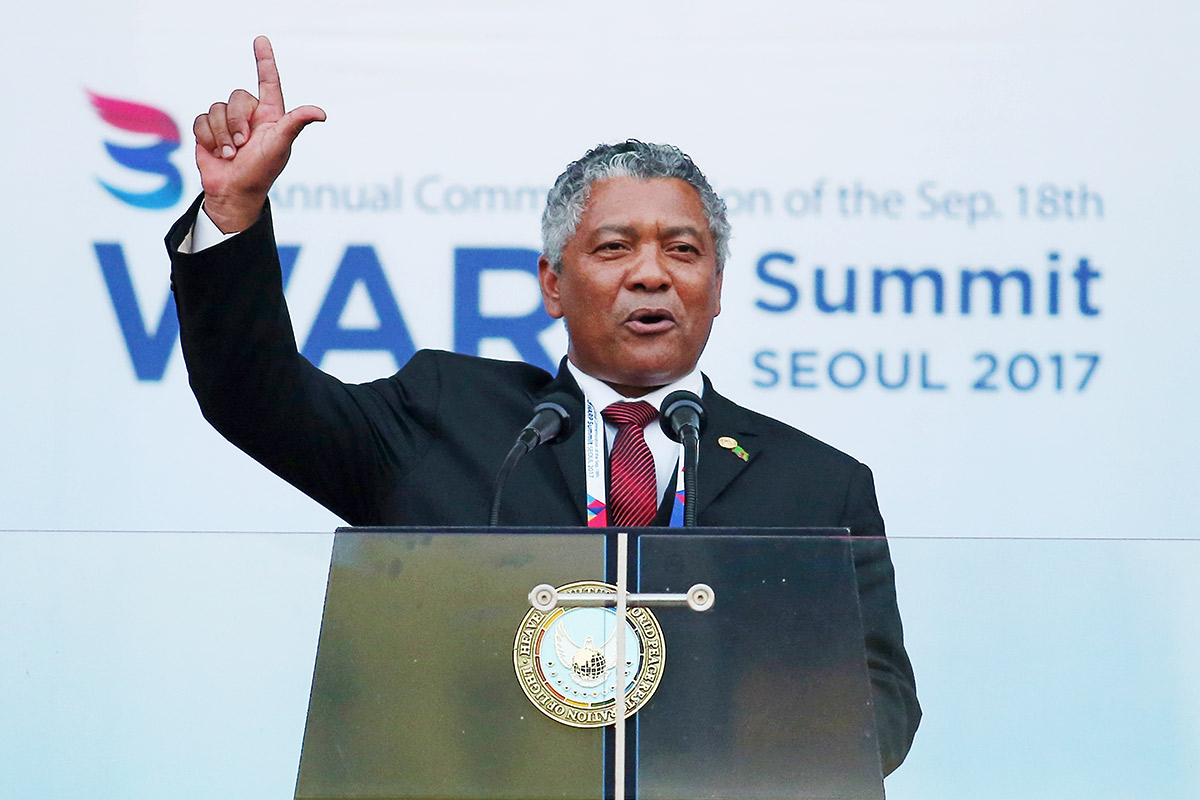 Hon. Given Lubinda, Minister of the Ministry of Justice of Zambia, called for everyone to acknowledge and complete their duty as the messengers of peace. “It is our inescapable duty to call to action all our political, religious, civic and academia leaders.”

He then added, “under the slogan ‘Together for peace as messenger of peace’ we have to develop an action agenda for world peace and cessation of war as a reflection of global citizens’ hopes and aspirations.” 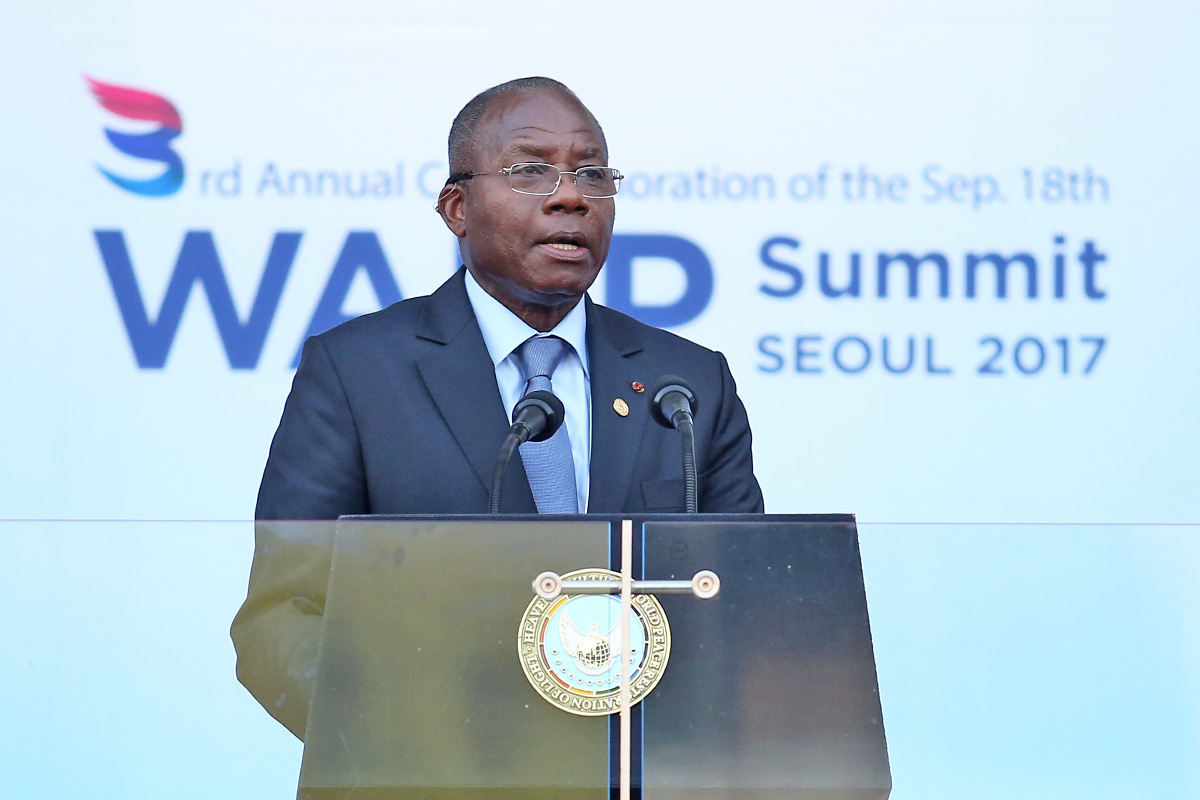 H.E. Adrien Houngbedji, President of the National Assembly of Benin, mentioned the value and future development of the DPCW, explaining that “the Declaration for Peace and Cessation of Wars (DPCW), which was written and proclaimed in 2016, is a huge step forward in the process of a general mobilization of the public from all over the world in favor of peace. It is a praiseworthy effort which needs to be saluted. However, the different principles of this declaration must still be operationalized through a course of action, so that our countries as well as the international community can look for the possibility of implementing these measures in their national laws and treaties, agreements and international conventions.” 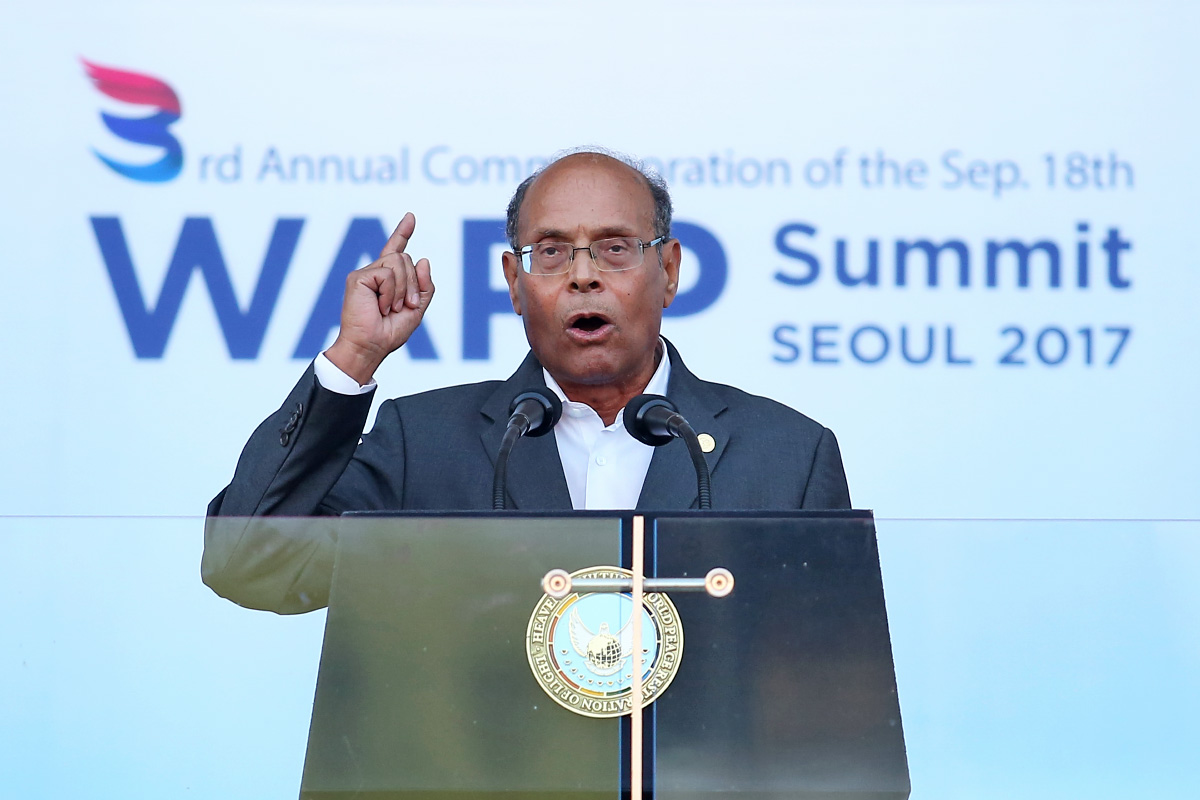 H.E. Dr. Moncef Marzouki, Former President of Tunisia, pointed out the widespread terrorism and violent activities in the name of beliefs that have plagued the world in recent years and said, “it is here I think that all the religious leaders of the world in general, and in this summit in a particular way can play an important role.” 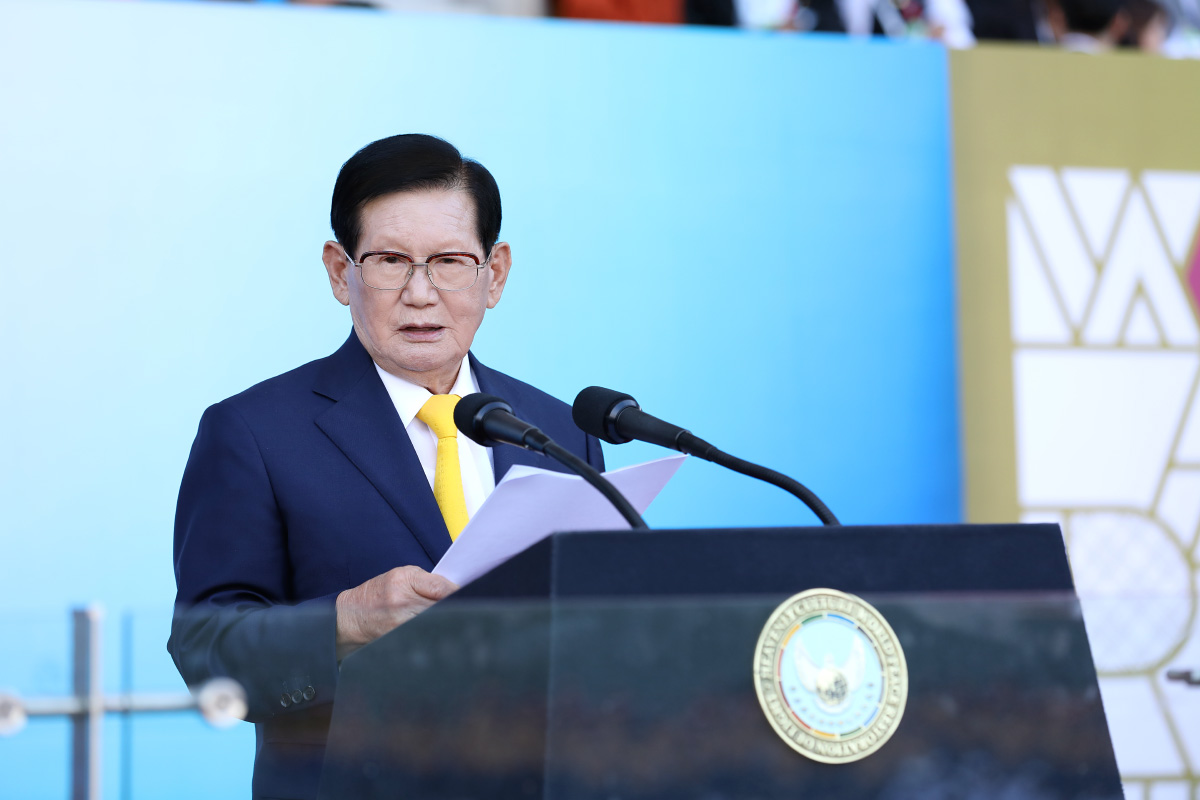 After the hopeful messages of these leaders of the various sectors of society, HWPL Chairman Man Hee Lee addressed all in attendance at the opening ceremony, expressing his gratitude for the inspiring speeches and the participation of the 35,000 people yearning for peace. He proclaimed that, “the peace work we have carried on will be recognized by heaven, Earth, and by all creation, and every member of the family of peace will go down in history as a light that shines forever. Allow me to urge the presidents of respective nations to sign in support of the 10 articles and 38 clauses of the Declaration of Peace and Cessation of War. Also, I implore all global citizens to unite as messengers of peace.”

Like a light shining in the darkness, the peace festival left the message “Peace is surely to be achieved” in every participant’s mind. Despite the differences in language, religion, and ethnicity, it was evident that all in attendance shared the same passion for peace and unity.

HWPL hosted an unprecedented peace festival in the only nation in the world that remains divided. It is now spreading the news to all parts of the globe in order to attain international cooperation that would bring about the cessation of war and establishment of sustainable peace.

As the peace messengers of this era we ought to publicize the message of the DPCW and advocate for its legislation as a legally binding international law. Moreover, this message should be developed into various forms of campaigns through numerous peace events worldwide. Peace must become a reality in our generation, which is possible when communication and a firm cooperative system is established. The terror and war still occurring today in different places around the world must come to an end during our lifetime.