Skip to content
Previous
Next
Published On: June 6th, 2019

3rd Annual Commemoration of the Proclamation of DPCW – Religious Leaders Respond to the Question: “Why Do We Need DPCW?”

On March 16, at the 3rd Annual Commemoration of the Proclamation of Declaration of Peace and Cessation of War (DPCW), 35 leaders of Hinduism, Buddhism, Protestantism, Islam, and Abrahamic religions from Berlin gathered together to answer the question, “Why Do We Need DPCW?” 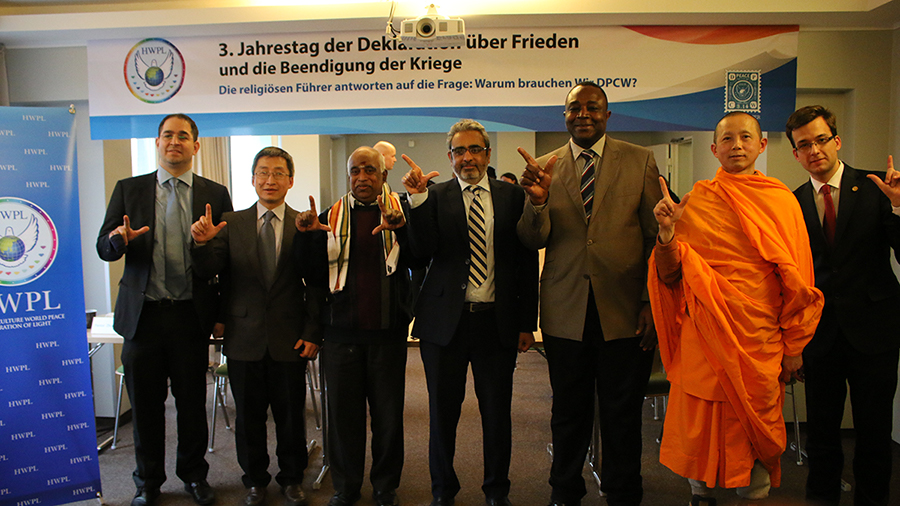 Amir Aziz, the Imam of Ahmadiyya-Moschee in Wilmersdorf emphasized that religious leaders must put in effort to eliminate religious discrimination, stating, “in this way religious conflicts can destroy world peace in future as well. Religious differences can be exploited anytime, anywhere by the follower of any religion. Therefore, we have to do efforts to eliminate extremism from the society. The best way is to make people understand that purpose of religion is not to hate others but to understand others.”

Monk Phramaha Monchai Saitanaporn, from Wat Phra Dhammakaya Berlin spoke on the necessity of the DPCW in the perspective of people of religion. He explained, “DPCW deals with these issues of religion which may be sensitive and includes specific provisions to resolve religious conflicts. That is why I strongly believe that the DPCW is the method to achieve peace.”

He continued by saying, “all religions speak of peace, but unfortunately religion has become one the causes for the greatest conflicts in human history. However, these conflicts along with ethnic issues are difficult to find a common ground for agreement and resolution.

Regarding one of the examples mentioned earlier, if Israel and Palestine were to meet once or twice every year to have talks, then how would things have resulted? Also for Kashmir, if forums were frequently held once a year between the two religions (Hinduism and Islam) to communicate together, then how would things have resulted? Would armed conflict continue as they are now?

Just last month, on February 15, there was a bomb terror in the Kashmir region resulting in the death of 46 police officers. Due to this, the Indian and Pakistani people in that area had to live in fear. There is no sure guarantee that such tragedies won’t happen again, and there is no assurance that conflicts would end in the next year.

Article 8 of the DPCW contains provisions to deal with these things. Like so, the DPCW contains the necessarily legal provisions to cut off religious conflicts, protect the freedom of religion, and encourage inter-religious dialogues. To put these rules into application, HWPL is operating and managing WARP Offices as a platform of dialogue and exchange. I, too, am frequently participating in the WARP Office since February 2017 and interacting with various people of religion. DPCW Article 9 states that if such disputes are prevented but are not resolved and continue to be caused by religion, then strong legal actions will be taken against them.

Regarding the bomb terror in Kashmir earlier, if there are attacks but no proper action is taken, then conflicts would continue and more innocent lives will be taken. However, if legal measures like search and seizure of weapons and surveillance over terrorist groups are taken, then the use of armed force can be eliminated from conflicts. Instead of giving up or ignoring the issue when conflicts arise, we need a legal device that can deal with them in order to make peace. Through this, the role of true religion can be practiced and the entire world can work together for that goal. That is why the DPCW is needed.” Throughout his presentation, he not only asked crucial questions but he also emphasized the necessity of the DPCW. 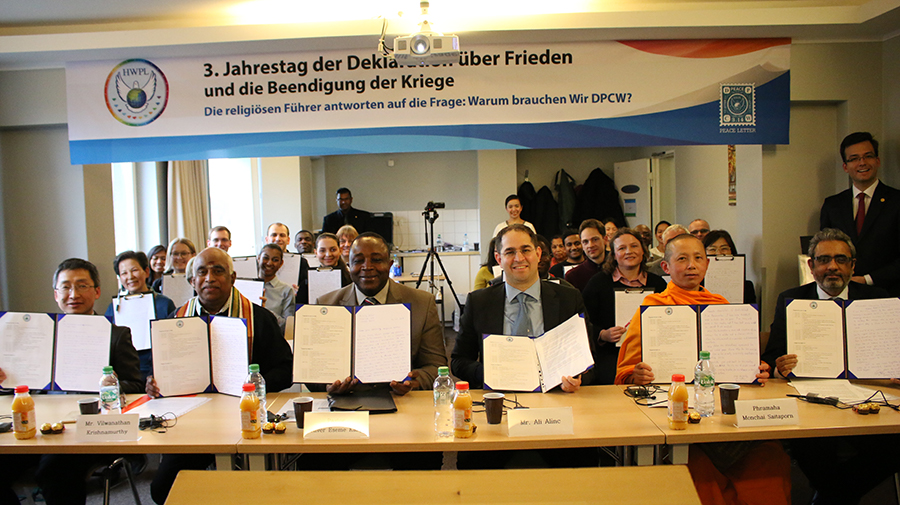 As the last speaker of the event, Vilwanathan Krishnamurthy, the Vice President of Sri Ganesha Hindu Temple, hand-wrote and read his peace letter for Angela Merkel, the Chancellor of Germany, as a representative of all the participants.

At the 3rd Annual Commemoration of the Proclamation of Declaration of Peace and Cessation of War (DPCW), the audience members were inspired by the passionate presentations of various leaders, and they all vowed to become messengers of peace. In this era full of religious conflict, the world is waiting for peace to be fulfilled through the DPCW.