Skip to content
Previous
Next
Published On: December 19th, 2018

In 2015 the United Nations announced the renewed Sustainable Development Goals (SDGs), which include a total of 17 goals that were set for the purpose of the continuous development of and improved coexistence within the international community. Sustainable development refers to future-oriented development that combines environmental protection with the development of both society and the economic world. In order to achieve such goals, countries around the world are now engaging in active discussions regarding the necessary role of all actors in the international community for the development and protection of the planet.

The goal of sustainable development can be condensed into five key factors: People, Planet, Peace, Prosperity and Partnership. These factors directly relate to the issues of coexistence and cooperation between the earth, the environment and society as a whole. This is also captured within the 6th, 7th and 13th Sustainable Development Goals, which are “Clean Water and Sanitation”, “Affordable and Clean Energy” and “Climate Action” respectively. This shows the international consensus that environmental issues are directly related to the creation of a better world that can be passed on to future generations.

At a time when many of the problems the world is facing while working towards sustainable development and a brighter future for the global community go beyond the traditional responsibility of a nation, some notable figures have risen to the spotlight and are now actively working to achieve the UN sustainable development target, namely the 5Ps. In this ‘Art: It Moves Peace’ series we will take a closer look at those who are advocating for respect for life and harmonious coexistence through voluntary environmental protection programs and campaigns.

“The good news is we don’t need superhero strength to protect our planet. We need education, and a collective, grassroots movement that is well underway.” 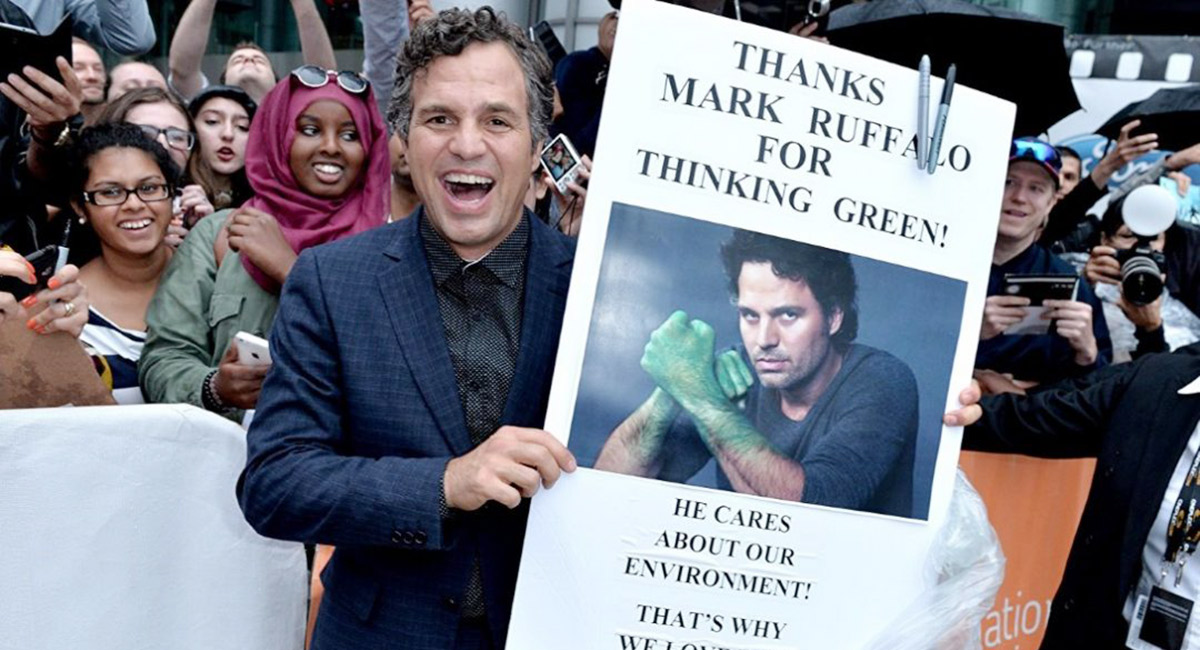 Among the activists diligently working for a sustainable future through environment protection programs and campaigns, there are some notable stars whose efforts have shone through the crowd. One such individual has dedicated his time and effort to advocate for sustainable change that would promote a harmonious coexistence between both people and nature. Mark Ruffalo may be best known for his starring role as the Hulk in the Avengers series, but he is not only “green” on screen but has a true heart for environmental issues that are plaguing much of American society as well as the international community as a whole.

Mark Ruffalo founded Water Defense in 2011, which strives to make clean water available around the world through the protection of current water supplies from industrial waste and pollution. This organization works from the bottom up and provides needed facts and information gathered through its intensive research projects in order to empower ordinary citizens to make a change and protect their right to safe drinking water. 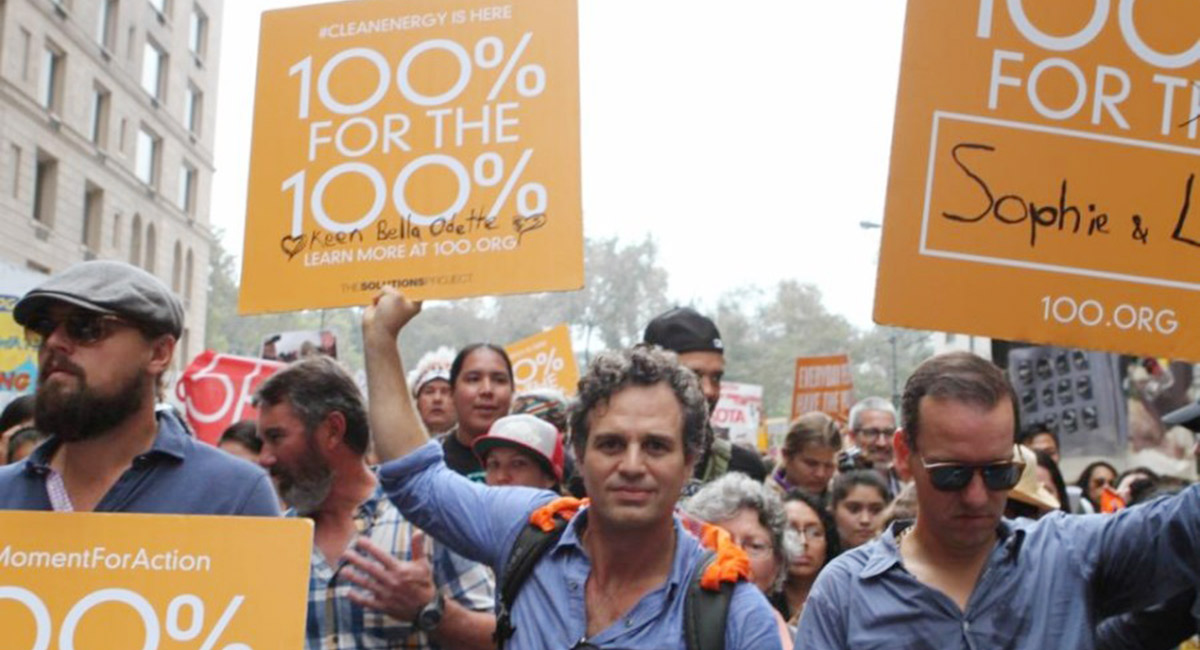 In addition, Mark Ruffalo held a major campaign in 2011 called “100%” in New York where he presented about the dire need for action to be taken regarding clean, renewable energy. He pleaded with citizens of all social standings and backgrounds to give more attention to this issue and take simple steps together in order to create a major catalyst for meaningful change. Inspiring others to make a difference is a major goal for Mark Ruffalo and through his fame garnered from his acting career he has inspired many to work for change now rather than later. He promotes the idea that small steps will lead to a brighter, more sustainable future and that if everyone comes together and makes a collective effort for change, then it is possible to achieve.

“The good news is we don’t need superhero strength to protect our planet. We need education, and a collective, grassroots movement that is well underway. As students across the country walk across graduation stages, wrestling with what comes next, I want to remind all of them of the power they have and the responsibility they bear. No other generation will be called upon so extremely and immediately to be part of so big and monumental a task. It’s an exciting time to be alive. It’s a purpose driven time. It’s a time where our values as human beings can really come into focus.”

He has not been alone in these efforts, however, but has worked alongside another big-name Hollywood celebrity who also shares this passion for creating a better world where people can coexist harmoniously among themselves and with the environment: Leonardo DiCaprio In fact, Water Defense is supported in cooperation with the Leonardo DiCaprio Foundation and both individuals have worked closely together on different environmental campaigns and projects. 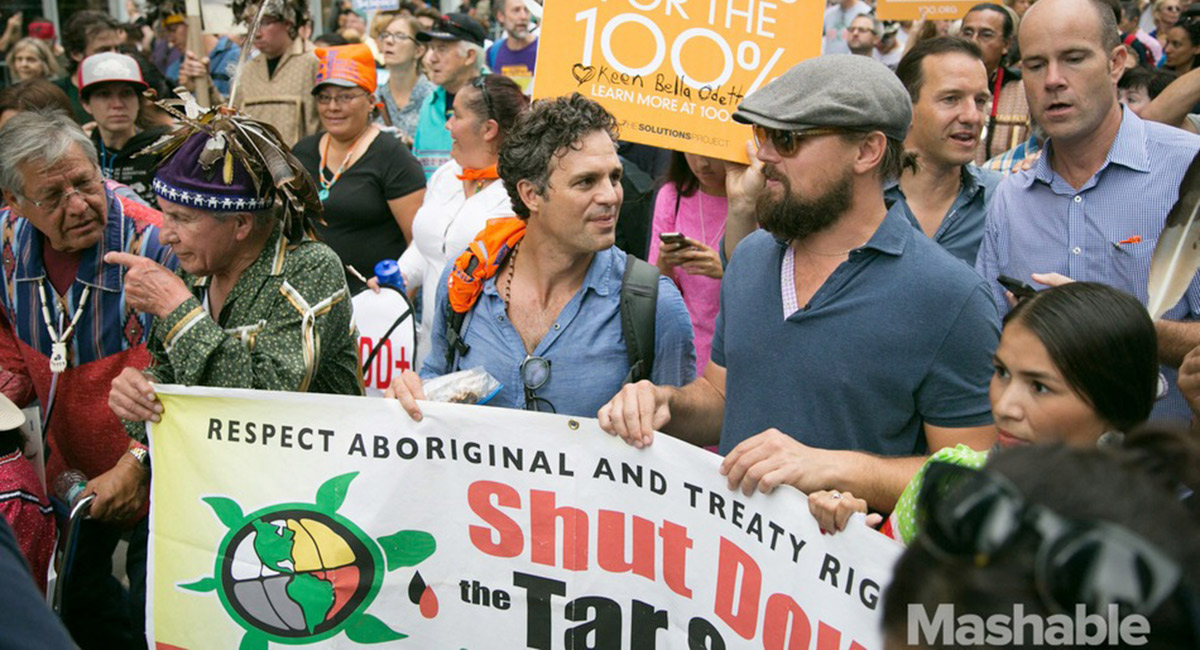 “Clean air and a livable climate are inalienable human rights, and solving this crisis is not a question of politics, it is a question of our own survival.” 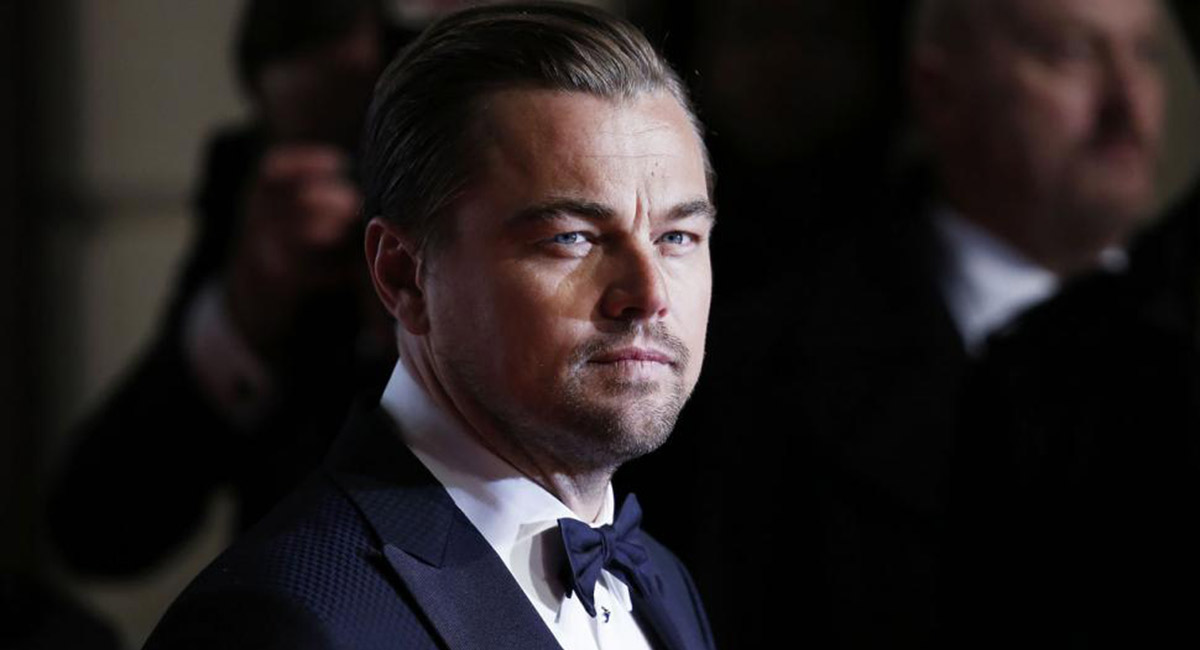 The world-famous actor Leonardo DiCaprio is not only a top Hollywood star that is loved by many worldwide, but he is also a renowned environmental activist. Even DiCaprio himself will not only introduce himself as an actor but will never forget to also include the fact that he is an environmental activist. In fact, in 2016, he was named as one of the world’s most influential icons alongside Pope Francis and Apple’s CEO Tim Cook in the US Times “100 Most Influential People”. So, DiCaprio is by no means a mere Hollywood actor.

DiCaprio founded the Leonardo DiCaprio Foundation (LDF) following the major success of the film Titanic in 1997 when he was only 24 years old. LDF is a non-profit organization dedicated to protecting the environment, preventing climate change and protecting the rights of indigenous peoples and endangered animals. From childhood he learned about the impact of human beings on the earth and talked about a sustainable future. So, with the vision of being “dedicated to the protection and wellbeing of all Earth’s inhabitants” DiCaprio created the abovementioned Foundation under his own name in order to show his personal commitment to further protecting the environment. 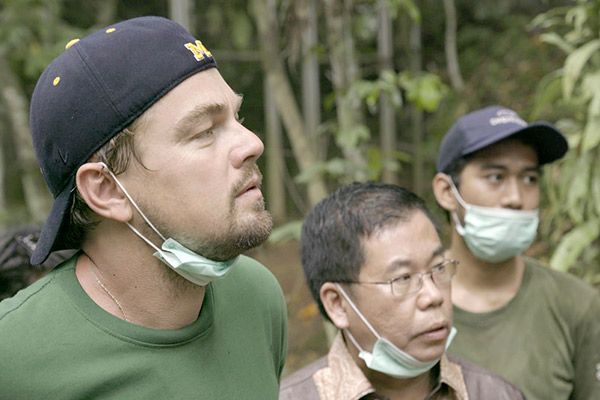 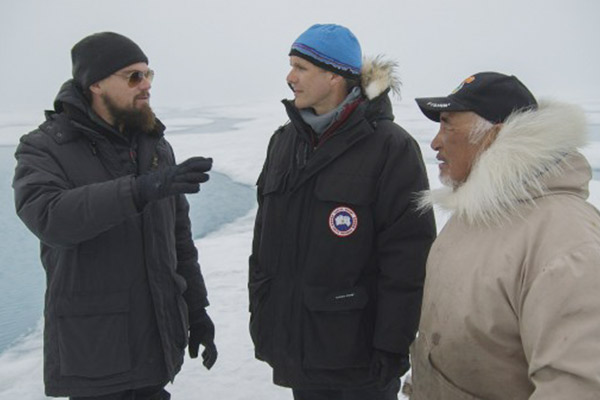 After the establishment of LDF, DiCaprio went on to produce and publish documentaries about nature, including The Eleventh Hour and Before the Flood, which brought together distinguished scientists and researchers with profound insights to fully inform humanity of its responsibility to protect, preserve and improve the current state of the environment. These efforts have had great success and resulted in many positive achievements in terms of raising people’s awareness of the pressing environmental issues, thus leading to increased participation in related projects. Also, in 2014 DiCaprio was appointed as a UN Messenger of Peace by former UN Secretary General Ban Ki Moon. 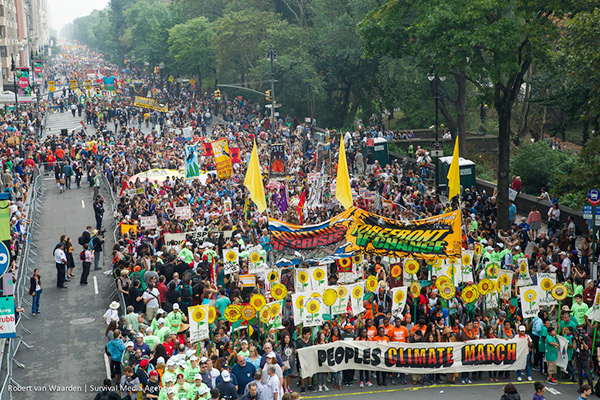 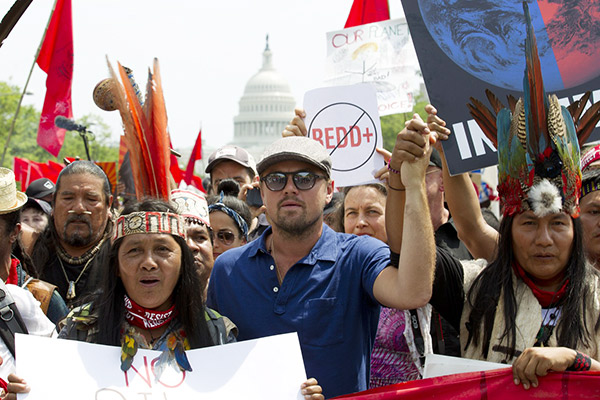 Alongside native leaders from the United States and South Africa, DiCaprio gathered more than 200,000 people on the streets of Washington DC and participated in a walk calling for action on climate change. A few days after this massive demonstration, he gave his opening speech at the 2016 UN Climate Change Summit. This meeting was one of the most important gatherings on this issue because it was a time when representatives from 197 countries around the world came together to discuss the creation of a sustainable future.

“I stand before you not as an expert, but as a concerned citizen,” he said. “This is not a partisan debate. It is a human one. Clean air and a livable climate are inalienable human rights, and solving this crisis is not a question of politics, it is a question of our own survival,” thus he sent a strong, clear message to all representatives of the world.

At the UN Climate Change Conference that was held on the same day, 197 countries unanimously agreed upon the Paris Agreement, and many major countries that have the capabilities to solve the problems discussed prepared themselves for the ratification of the agreement, resulting in the enactment of the first international law to be applied with such comprehensive binding force at the end of the year. 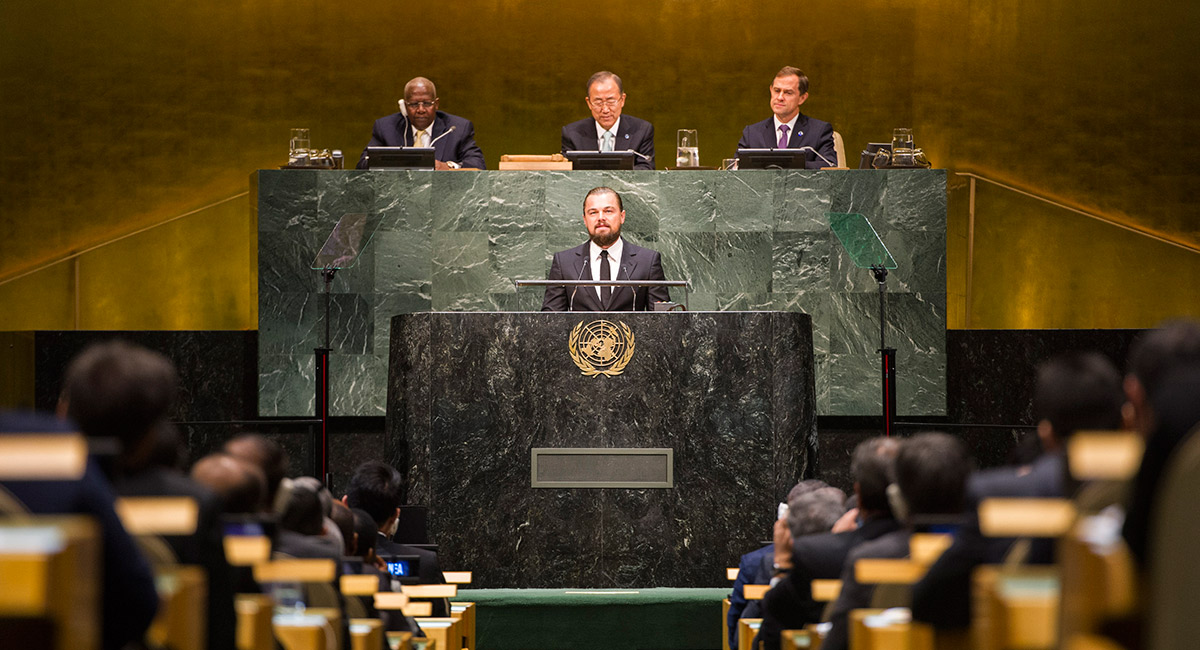 DiCaprio’s actions show that an individual’s thoughts and actions can be transformed into real movements, and that those movements can eventually become a force to move the entire world. His story regarding the actions resulting from a desperate heart for the achievement of a sustainable future and for humanity sends the same message to us as we strive to achieve peace.

“We do a lot of things in the world that are wasteful. We keep talking about this all the time. Hopefully, fingers crossed, with these small steps, we’ll make that transition on a much larger scale in the future…This is the most urgent of times and the most urgent of messages.”

Mark Ruffalo and Leonardo DiCaprio have both used their fame to promote change in the world. This change began simply with their courageous and desperate voices proclaiming the inconvenient truths about pressing environmental problems. The world has been awakened by these messages that have spread across the globe, resulting in a multitude of small movements. We are all breathing together on this planet, so we are responsible for turning it into a better place to live. Taking action to resolve the various issues related to the environment is not only a duty to be carried out by those with high social statuses, but also a task that all individuals must complete because it is directly linked to peace and a sustainable future for all. Now is the time to make a change and move the world.