Skip to content
Previous
Next
Published On: November 30th, 2022

“What is the meaning of the Cintamani held by Virudhaka, King Sinsu Blue Dragon, who guards the South among the Four Heavenly Kings?”

“What kind of lesson was the drawing of a cow and a young monk on the wall of Daeungjeon Hall painted for?”

The youth continued to ask questions full of curiosity at Jikjisa Temple, a temple in Gimcheon City, Gyeongsangbuk-do, Korea, where autumn leaves were beautifully colored. On October 29, an event called, “Buddhist Cultural Tour with Ven. Beopryun, the Publicity Ambassador of HWPL,” was hosted in joint by HWPL’s Daegu & Gyeongbuk Branch and Geumdangam Temple of Jogye Order of Korean Buddhism. This event allowed for the youth members of the International Peace Youth Group (IPYG) to participate and gain understanding about Buddhism, which forms the emotional basis of Korean culture. It included a tour of two temples located in Gyeongsangbuk-do, Korea: Jikjisa Temple in Gimcheon City, and Chukseosa Temple in Bonghwa with Ven. Beopryun’s commentary. 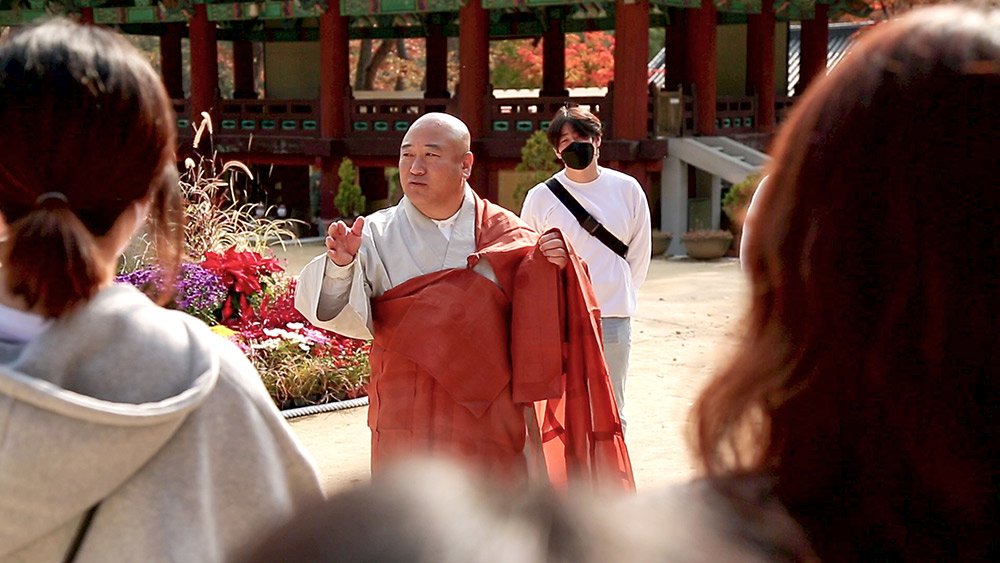 Jikjisa Temple in Gimcheon City, which was visited first, was founded in 418 (2nd year of King Nulji) as the head of the 8th branch of the Jogye Order of Korean Buddhism. It is a repository where one can view national treasures and cultural properties in one place such as Stone Seated Bhaisajyaguru Buddha (Treasure No. 319), Three-story Stone Pagoda in front of Daeungjeon Hall (Treasure No. 606), Three-story Stone Pagoda in front of Birojeon Hall (Treasure No. 607), and more. Also, it is famous for the temple where Preceptor Samyeong, who led the monk soldiers during the Japanese Invasion of Korea in 1592, served as the chief monk.

Ven. Beopryun, the Chief Monk of Geumdangam Temple, Jogye Order of Korean Buddhism, and IPYG members gathered in front of Iljumun Gate, One Pillar Gate, which is the first gate to enter Jikjisa Temple. Ven. Beopryun introduced the Iljumun Gate and said, “Iljumun Gate means to gather your mind disturbed by agony and head to the world of truth with one mind.” He also said, “In addition to Iljumun Gate, you need to go through Daeyangmun Gate, Geumgangmun Gate, and Cheonwangmun Gate to reach Daeungjeon Hall, which is the main temple symbolizing pure land Buddhism. Each gate contains the necessary mindset to achieve nirvana and reach pure land Buddhism.” 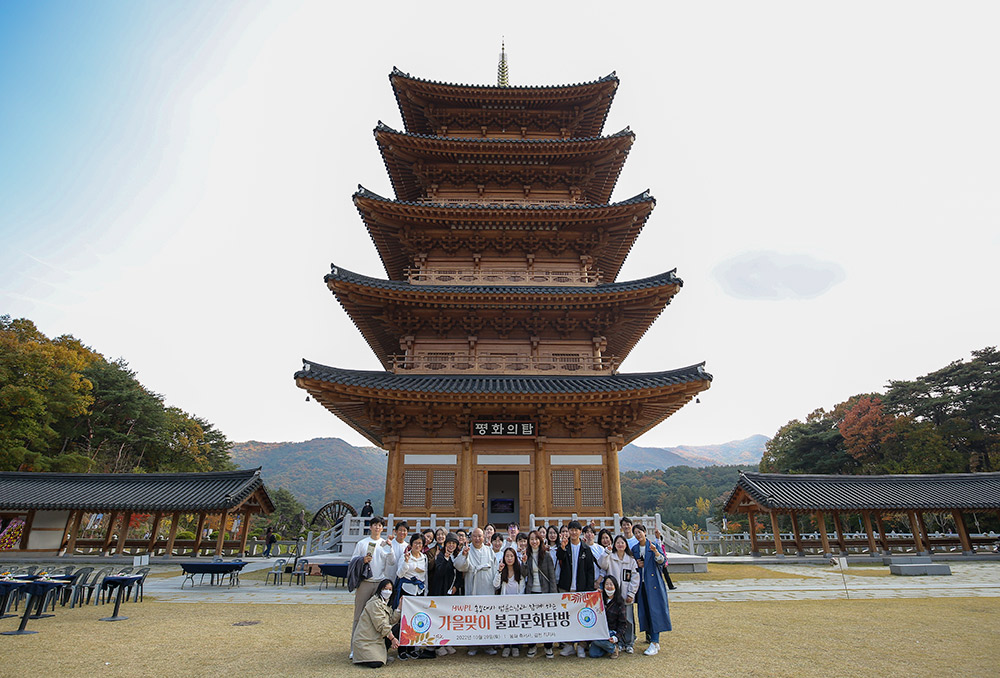 Chukseosa Temple in Bonghwa, which they visited after the tour of Jikjisa Temple, was founded in 673 (17th year of King Moonmu), and is a branch temple of Gounsa Temple, which is the head of the 16th branch of the Jogye Order of Korean Buddhism. Chukseosa Temple has continued to exist especially with the practice of Zen meditation. In 2005, it received attention for building a stone pagoda by bringing 112 relics of the Buddha from the Myanmar Sayadaw Baddanta Kittivara Relic Museum.

The IPYG members who arrived at Chukseosa Temple admired the magnificent view of Mt. Munsu. It is said that Great Monk Uisang, the founder of Chukseosa Temple, also danced for three days in joy after discovering this temple site. Ven. Beopryun introduced to the youth the pagoda preserving relics of the Buddha erected in 2005 and Seated Amitabha Buddha Triad built in 2019 and explained the teachings of Buddhist spirit and Buddhist scripture instilled in each.

After the tour, Ven. Beopryun said, “This cultural tour with youth members was unique in that I could communicate directly with young people, and I think the world of peace that we hope can be achieved faster when such a place of exchange is further expanded.”

One of the youth members said, “I think Buddhism is like a meaningful religion for life. There has always been Buddhism at important historical moments in Korea.” He also said, “I learned more about Buddhism by visiting temples while listening to Ven. Beopryun’s commentary. It was really nice to see historically meaningful places.”

HWPL and Geumdangam Temple of Jogye Order of Korean Buddhism have been engaged in peace activities such as the World Alliance of Religions’ Peace Office and Religious Peace Camp after signing a memorandum of understanding (MOU) for the realization of world peace in January 2022. HWPL and Geumdangam Temple will continue to plan and practice community service, religious and cultural activities for young people, activities for inter-religious solidarity, and the establishment of a peace monument.