Skip to content
Previous
Next
Published On: September 29th, 2021

Concerted Action for Sustainable Peace: Cases of Alliance of Religion 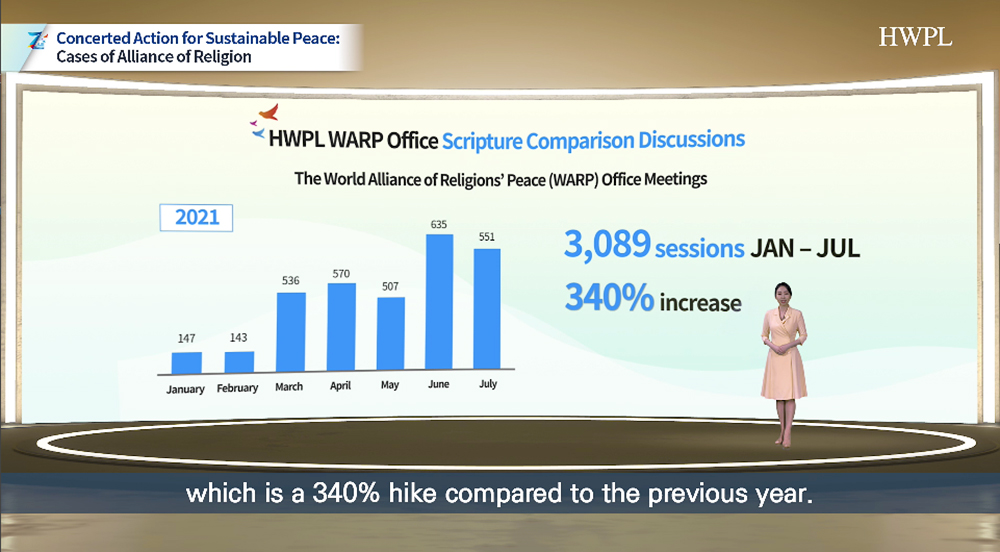 WARP Offices were established to fulfill the pledge made during the 2014 HWPL World Peace Summit for the alliance of religions. With 265 offices operating in 129 countries, activities of the WARP Offices have been growing despite the pandemic. For seven months since January in 2021, 3,089 scripture comparison discussions were held, which is a 340% hike compared to the previous year. Such active engagement was possible thanks to the endeavors of countless religious leaders. 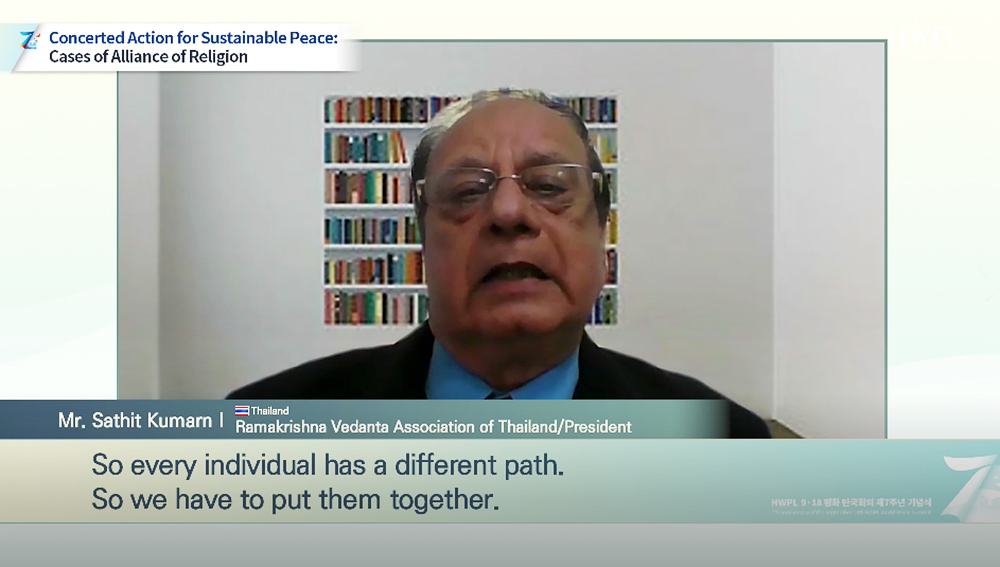 Mr. Sathit Kumarn, Thailand, President of Ramakrishna Vedanta Association of Thailand
“Actually, you know according to the scriptures, religion is only one, and God is only one, but the paths are different. Every individual has a different path. So, we have to put them together.” 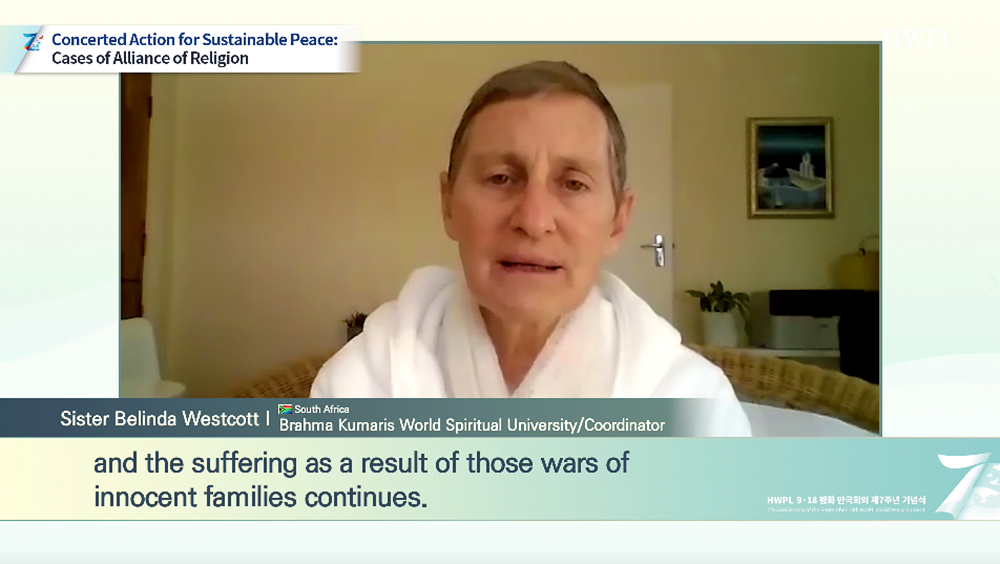 Sister Belinda Westcott, South Africa, Brahma Kumaris World Spiritual University, Coordinator
“And definitely, this understanding and harmony between faiths is a huge contributing factor to reducing conflict and war in our world. We’ve been a bit distracted with COVID but the wars continue, and the suffering as a result of those wars of innocent families continues. And so I think that, you know, our group is a very small group. But when I think that these groups are happening all over the world, it’s not a small thing. And you know, it kind of reminds me of a network of light. And it’s like this network is over our planet. And there are people, like-minded people holding the same sentiments, aiming for the same peace on our planet. And I think there’s a lot of power in the collective. And it took one man to take the first step. But now there is this amazing network of light that’s happening.”

Carrying out practical religious studies, spreading the culture of peace to the community

While carrying out practical religious studies in discussions, they are also expanding activities to promote the culture of peace dearly needed in local communities. In particular, there have been efforts to build WARP Offices in temples to spread a culture of religious peace. A case in point is Eungok Temple located in Jeongeup, Jellabuk-do Province, under the Paradise Jogye Order of Korean Buddhism. The Founding Master Eungok was deeply inspired by the Declaration of Unification proclaimed by Chairman Man Hee Lee on the 65th anniversary of Korea’s National Liberation Day on 15 August. Master Eungok opened the temple gates to HWPL WARP Office. 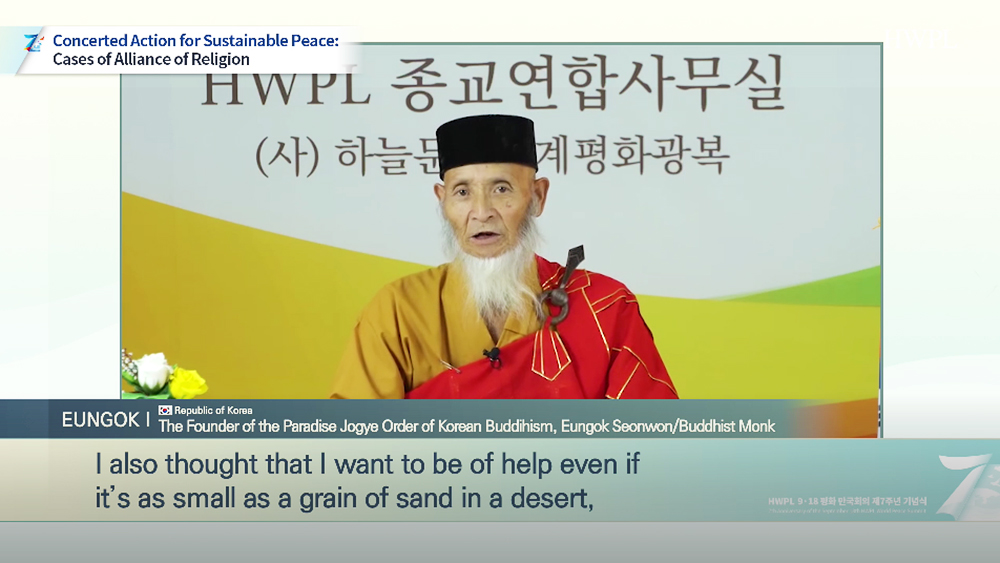 EUNGOK, Republic of Korea, The Founder of the Paradise Jogye Order of Korean Buddhism,
Eungok Seonwon, The Buddhist master
“The Declaration of the Unification is not just for a few to listen to and enjoy. I believe that all citizens and people of North and South Korea need to implore and call for the reunification of the two Koreas and world peace with clenched fists. That is why, I joined the world peace movement as a monk to observe and support the strength stored in the declaration until my last day. As I witnessed the peace work on site, I was deeply inspired by Chairman Man Hee Lee, who was a leader of age standing at the forefront and leading others with guidance. I also thought that I want to be of help even if it’s as small as a grain of sand in a desert, so I decided to take part in the movement. As much as humanly possible, until I die, I will be at the front for the reunification of Korea. Thank you very much.” 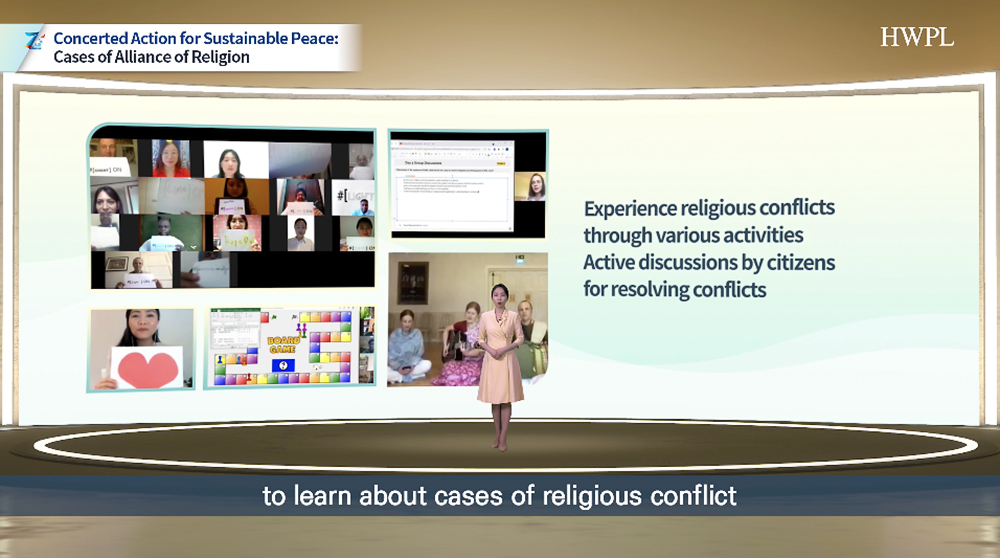 Peace among religions cannot be made with only the efforts of religious leaders. Civil society is a key player in opposing war and protecting peace, so, its participation is absolutely necessary. That is why the WARP Office has prepared a platform for people across the globe to experience various religions and take an active part in WARP Offices through the “HWPL Religious Peace Youth Camp.” 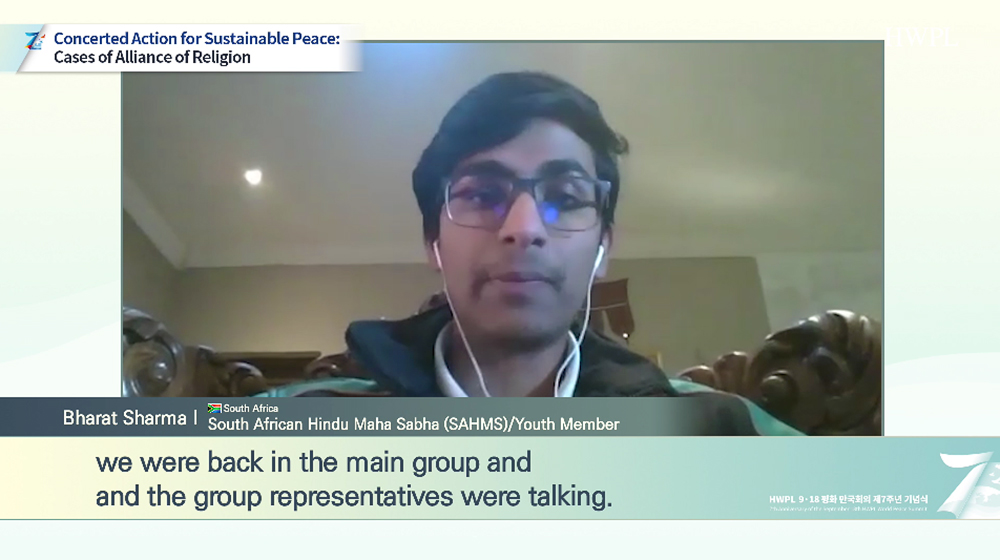 Bharat Sharma, South Africa, South African Hindu Maha Sabha (SAHMS), Youth Member
“It was when everyone finished their discussions, and we were back in the main group where everyone was the group representatives were talking, and I think it’s how well they spoke and how different their views were. It was very impressive to see other people’s perspectives “Oh, I didn’t even think of this. I think the best way to become educated and to become a global citizen and talk to them, and respect their views, and put yourself in their shoes. So, I think that’s very important to do to grow as a person and to become a better person. So I think as organization like HWPL can help and facilitate to becoming that very person.” 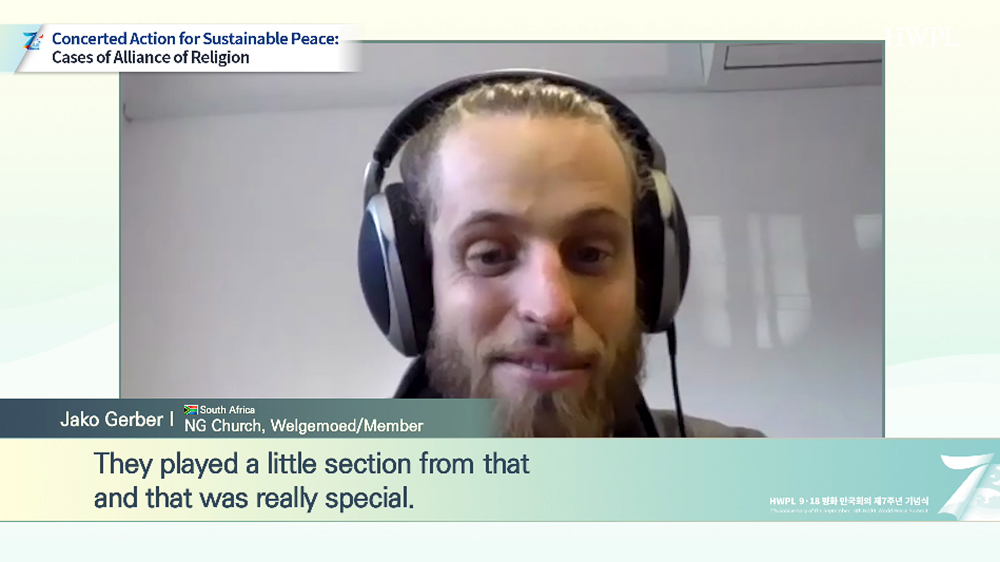 Jako Gerber, South Africa, NG Church, Welgemoed, Member
“The final video that they played regarding the Island in the Philippines, where there was this one moment where the peace worker was at the meeting where the two fractions were, he just gave this passionate speech. They played a little section from that and that was really special. And when they showed the peace monument being unveiled. That was really powerful to see like the symbol that is applicable for everyone. Everyone can relate to that symbol, so that was really nice. I think they’re great. I think it’s good to have something like that regularly and to have it be exposed to the broader public so that you can change the perception of “Religions, they only cause war.” You can add something fun like you did with the board game and you can maybe expand on that so that it can be a thing on people’s calendar where they say, “Oh yeah! I’m going to go to this month’s thing.”

When the whole world suffered from the pandemic last year, leaders of religions convened at HWPL WARP Office meetings to overcome the crisis together and hosted the Global Prayer Service of Religious People online. Becoming one in mind to save the world marred with conflicts, sufferings, illnesses, and disputes and to realize peace, they prayed together. The group prayer now includes civil society and continues.