Skip to content
Previous
Next
Published On: August 24th, 2018

Ethiopia Begins the Harmony of Peace through Collaboration of Politics, Education, Religion and Civil Society

On July 9th, Ethiopia and Eritrea declared an end to the conflict that has been raging for 20 years, thus promoting further peace and prosperity within Africa. This, however, was just the beginning of the journey towards the realization of peace for the region. From the 15th to the 16th of August a peace conference was held in Ethiopia with the intention of strengthening cooperation among leaders from all sectors of society for the full achievement of peace. During that time, political and social representatives from both Africa and the Middle East gathered to discuss international cooperation for peacebuilding through a series of events held in Addis Ababa, Ethiopia including the Ethiopia Peace Conference, the Addis Ababa Summit and the Open Dialogue with Religious Leaders.

On August 15th, political leaders, education professionals and youth leaders participated in the Ethiopia Peace conference that was held in the United Nations Economic Commission for Africa (UN ECA) located in Addis Ababa, Ethiopia in order to establish plans for the achievement of peace. This event was attended by the former president of Ethiopia Mr. Negasso Gidada as well as the representatives of 10 universities, the State Minister of Education and 700 university students, all of whom took part in the DPCW Advocacy Signing Ceremony to promote cooperative peacebuilding efforts. 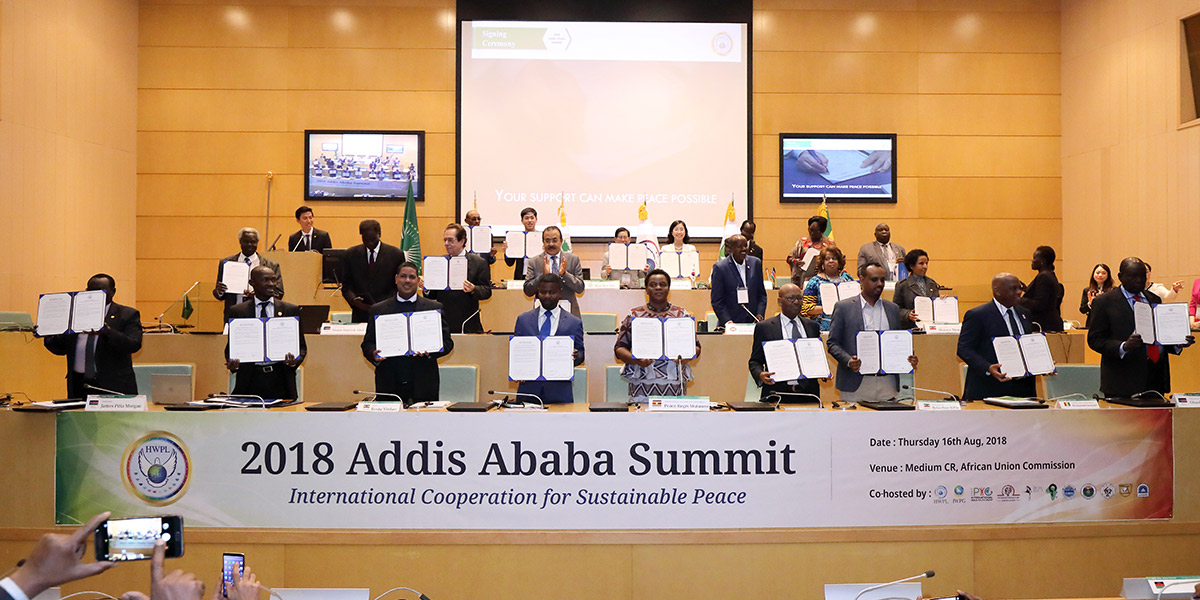 Mrs. Dagmawit Moges, Deputy Mayor of Addis Ababa’s municipal government, gave a speech at the event and addressed the participants saying, “Addis Ababa city administration has a deep conviction that the launching of peace education in the universities could help promote harmony among students regardless of their nationalities, cultural background and religions.” She emphasized the necessity of the integration of peace education and also stated that the City Administration will pledge to extend every support necessary to institutions engaged in the implementation of this peace education project. An MOU agreeing to implement HWPL’s peace education curriculum was also signed by the university representatives in attendance laying the foundation for peace education in Ethiopia.

The Chairman of HWPL who visited Ethiopia following a peace tour to the United Nations in May, stated “We should also write a letter to the president to support the implementation of an international law for the cessation of war. It is said that the people hold the power in a state. That’s why the president has no reason to refuse what the people want.” He also gave a detailed presentation outlining the role of civil society in the establishment of peace and urged them to join in the peace activities of HWPL. 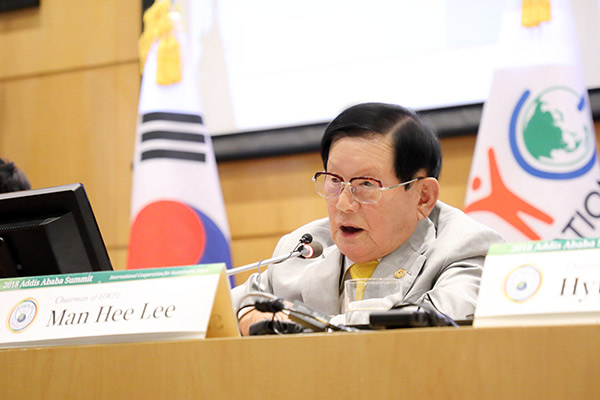 In the Open Dialogue with Religious Leaders, leaders from different denominations gathered for the purpose of fulfilling their role as one of the main actors in the peacebuilding process. It was stated during this event that “no religion teaches fighting or killing each other. In order to resolve the religious conflicts, we all must know the scriptures, and I hope that we can show this first from the Ethiopian Protestant Church through an open dialogue with religious leaders”. Prior to this event around 50 pastors participated in a pre-seminar and signed the Pledge for the Regular Operation of Open Dialogue in Ethiopia, which was then delivered to Chairman Lee of HWPL. All participants agreed that religious leaders should take the lead in creating a peaceful environment and made plans to hold regular events for the cooperation of different religious groups starting in December of this year. 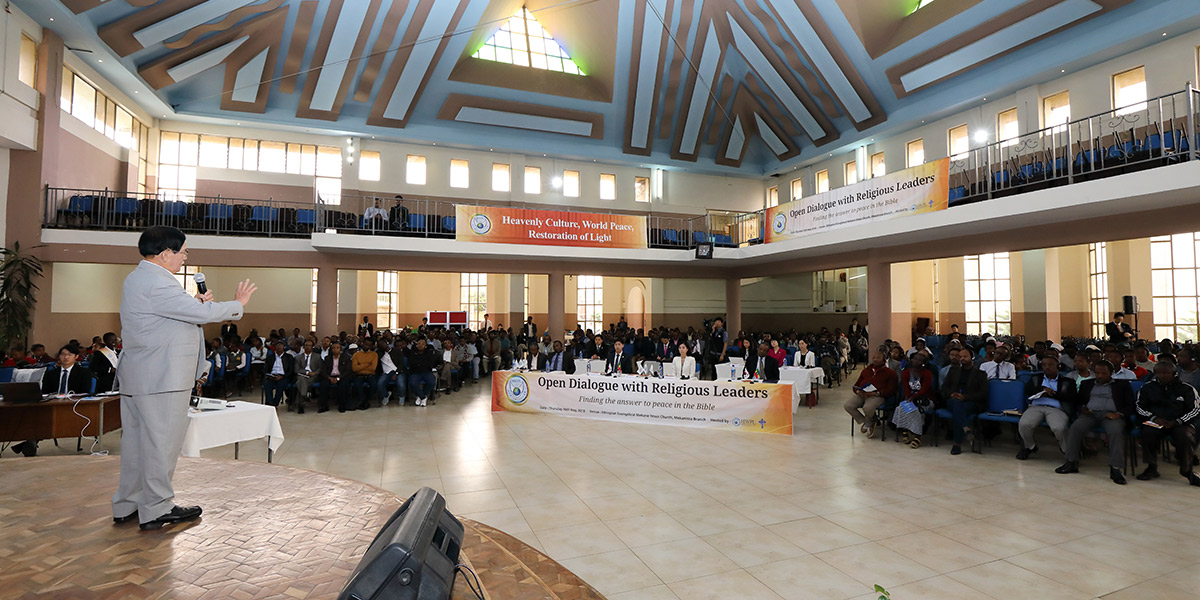 At the Addis Ababa Summit held in Medium CR, African Union Commission and co-hosted by international organizations including the Inter-African Committee on Traditional Practices (IAC), the International Law Association (ILA) and HWPL, politicians from Africa and the Middle East discussed the need for an international law for peace to bring out stability in the region and promote peace-related projects at all levels of society.

RT. Hon. Rebecca A. Kadaga, Speaker of the Parliament of Uganda, stressed the role of political leaders for realization of peace in his speech, explaining, “The DPCW draws upon the principles of peace expressed through the ages through which the people of the world expressed their desire for global peace and called upon world leaders to put aside their vested interests that stand in the way of world peace and harmony.” During this event, prominent leaders also had time to give their sign their support for the Declaration of Peace and Cessation of War (DPCW). This followed the official declarations of support for the DPCW that were previously given by the heads of Swaziland and the Republic of Seychelles. 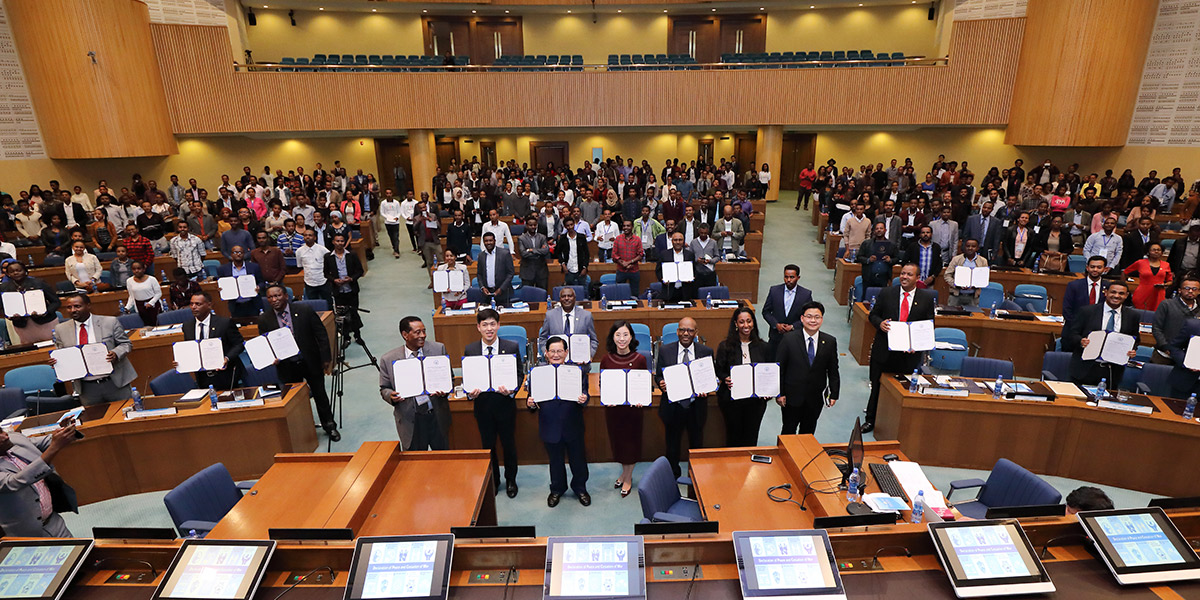 All participants were in agreement that the core principles of the DPCW, including the development of friendly relations between states, the prohibition of the use of force and the spreading of a culture of peace, are essential in the establishment of a sustainable peace that can be left to future generations.

Over the course of these two days individuals from all sectors of society were able to join together with HWPL and give their support for the peace activities that are currently being run with the intent of building peace on an international level. Chairman Lee of HWPL, who took part in these events as part of his 29th World Peace Tour, emphasized the importance of the peace movement and the necessity of cooperation for the realization of peace proclaiming, “If there is an answer to peace, then any family of the global village born in this era should become a messenger of peace…ending war and making sustainable peace a legacy for future generations.” HWPL will continue to conduct events and activities to achieve even greater successes in the near future.