Skip to content
Previous
Next
Published On: March 29th, 2022

Greetings to family of peace joining the March 14th HWPL’s 6th Annual Commemoration of the Declaration of Peace and Cessation of War from around the world. Greetings again. I am pleased to see all of you.

The earth is a very precious place that is essential to all of us humanity. HWPL has been working to end wars and create peace on this earth so that it can be a lasting legacy for future generations. Today marks the 6th anniversary of one of such efforts. Dear family of peace, I believe we still have the determination and the resolve to bring wars to an end and leave a legacy of peace for future generations. We have been advocating that everyone, regardless of who they are, should join the family of peace and become messengers of peace. Isn’t that so? However, at one place in the world, an unwanted war is going on. When a war is fought, who dies? It’s the young people who lose their lives. I cannot but say that this is a barbaric act. Why must they cause such a conflict instead of living in their own countries?

There is one thing I would like to say in this regard, and it’s not for the sake of boasting. The Philippines is a country with a population of more than 120 million people. One day, a Catholic leader from Mindanao, Philippines, came to see me to make a request. He asked me to come and lead a peace movement there. Sometime after receiving such a request, I was able to go to Mindanao, Philippines. I asked them, “Everyone, do you want peace, or do you want war? Raise your hand if you want war.” Then I said, “Raise your hand if you want peace.” I told the two leaders of Catholicism and Islam, “Please say what you would like to say. And let’s decide whether we will let this conflict continue or live together in love, helping each other hand in hand. Let’s come to an agreement today.” That’s what I said. And as you see now, everyone wants peace, isn’t that so?

War kills people. This should not happen. What could possibly compensate for them?” I also asked whether it was the will of their god to fight and kill people. And that day, I brought with me an agreement that had been drafted. It was an agreement to work towards ending the conflict, and I asked the representatives to sign it before God and people of the world. So they made the promise.

Then our peace movement does not go in vain, but it is successful. We have established peace monuments in different countries, appointed peace educators, and provided our peace education to schools around the world by sending them teaching materials. Have you heard about this news? We have been making these efforts to create a peaceful world without war. If people of religion talk about heaven only with their lips, but fight and kill others in reality, how could this be called true religion? This should not happen again. 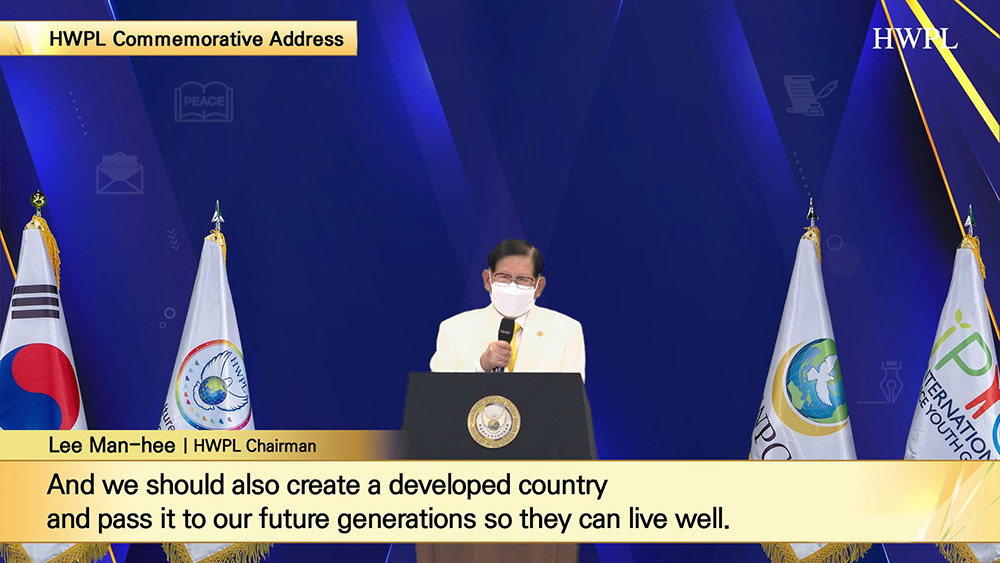 I have gone around the world for peace work. I have met with former and current heads of state, chief justices, and speakers of parliaments in different countries. What I said to them was, “Let’s end wars now and work together to achieve peace. Will you join us, or not?” Everyone agreed to join. So I asked them to sign an agreement, which I brought signed by them. This is what I have done in countries around the world. What are your thoughts on this? Do you think this kind of work was possible because of my abilities and power? No, it was God who made it possible. He showed peace to many people.

And that’s not all. When I was visiting those countries, people saw that a light was above me and took pictures of me. When doing this kind of work, we need God, and we should be people that the world needs. All members of the global community should become messengers of peace. Do you agree? Everyone should become a messenger of peace. All countries should acknowledge this and make an effort to create peace. Isn’t that so?

There is the one who created this earth. The Creator created this earth. But Christianity says that people who were created committed sin, and the Creator had to leave the earth as a result. But the time has come for God the Creator to come back. He promised to return to the earth, and it is recorded in the Scriptures when and where he will come back. The Scriptures even talk about what kind of signs will appear when it is time for God to return. When such signs appear, it would be time for God’s return. Before God comes, the world is ruled by the evil one, but since God is the Creator and he is the one who created the world, how much would he love his creation? He would love it greatly. So the Creator and the creation will become one family and live together in this world. Then the world will be such a happy and wonderful place. It will be a world of paradise. Yes, it will be.

Faith comes from understanding. It comes from understanding. I am sure that all families and all countries, regardless of who they are, would want to live well in comfort. No one would want to be in a war fighting. Isn’t that the case? So we, HWPL, have worked on something, and that is legislating peace and cessation of war through international law. Under the current international law, the use of force is allowed in certain circumstances, so it alone is not enough to end wars. That is why we started this international law initiative. We appointed 21 members of the HWPL International Law Peace Committee. Now, our ultimate goal is to have our declaration passed by the UN. But because of the pandemic situation, the process is halted at the moment. But once the UN reviews and approves it, this declaration on cessation of war will be adopted into international law. The document contains provisions saying that states should live on their own land, and they should not invade other weaker states and cause them pain. These provisions are well written in the declaration. Whether they are well off or not, they should live in their own countries. Freedom is the greatest of all things. Freedom is the greatest thing.

How great would it be to create such a free world and leave it as a lasting legacy for future generations? Instead of just talking about peace with our lips, we created something that could actually bring peace. It calls for an end to weapons of mass destruction and an end to wars and conflicts as well. It calls for establishing peace monuments, which is taking place even at this moment. Isn’t it great? Also, for the sake of peace, I have asked many people for their cooperation and worked in a way that they could acknowledge, but time keeps passing by. Then as time passes, shouldn’t the work improve more and more? It should improve. This peace movement should teach about peace in homes and schools, even elementary schools. We need to keep this in mind.

We, HWPL, are providing schools with teaching materials on peace. When they learn and accept all of this content into their hearts, who will love their country, their people? The people will love their country. The country will love their people, wouldn’t they? This is our hope and desire. Dear family of peace, let’s not forget this. And I hope we always communicate and keep in touch with each other. It would be very nice to ask each other questions on the phone and exchange letters and correspondence. We should do so.

Also, Jesus, the son of God, taught to love our neighbors as ourselves. Then we should love one another, being the same people. And we should also create a developed country and pass it to our future generations so they can live well. It is what we should accomplish. Let’s not forget this. So the whole world should transform into a place of love without any war, dispute, or conflict according to the will of the Creator. Family of peace, let’s all take part in this work. We should not just sit on our hands. Let’s exchange letters and cooperate in order to create such a beautiful world.

Look at the flowers out there. These beautiful flowers blossom, and we hear birds sing as well. How wonderful is it? Without this kind of earth, we will all die in pain. Because we were given such a good place to live in, we should make it more beautiful. Family of peace, I would truly appreciate if you will shine light to the world as beautiful family members of peace. Let us become the true light that shines on the whole world. This is my true hope and desire. Thank you. Now, I would like to close this message by shouting the phrase that we always say at the end. May great blessings be with all of your families and countries, and all families and countries should become one, isn’t that so? Then the whole world will be united in peace. I will close with the phrase. We are one! Thank you very much.