Human Rights Webinar in Zambia: Discussions on the enactment of laws to solve the problem of early marriage and the roles and efforts of civil society

On April 30, the HWPL Seoul Western Department held a Human Rights Webinar in Zambia to discuss the enactment of the Child Code Bill and the role of civil society to solve the problem of early marriage in Zambia. About 30 people, including members of the Zambian Parliament, heads of youth organizations, youth members, elementary school teachers and people from media outlets, attended the webinar.

Zambia Lukulu East Member of Parliament Christopher Kalila, who is also the Chairperson of the Committee of the Comprehensive Sexuality Education (CSE) which was formed to enact the Child Code Bill, shared, “Child marriage is actually one of the abuses of our children. We are in a hurry to pass it. Because we believe that it will not only promote the human rights of our children, to protect them, and deal with all these vices which we have been talking about, including new crimes, such as child pornography, and some of the bad things. This is what we expect the bill will deal with: The Child Code bill.”

Zambia has one of the highest rates of early marriage in the world. The Zambian government is making considerable efforts to review policies and laws that affect early marriage. In addition, since the change of government in 2021, the current government established a national strategy to build Zambia free from early marriage by 2030.

Mutinta Mulenga, the founder of the Chosen generation youth club solwezi (CGYC), said, “To reduce the cases of early marriages, we have to create a girls’ network. Under this network, we can make a project for girls to interact with each other by sharing skills and information that will benefit their lives. And the government should put in place laws and accessible platforms that will help children, the parents, and the community, and our role as an organization is to put an effort to raise awareness that promotes the rights of children and to abolish harmful cultural and religious practices that don’t promote the welfare of children.”

Furthermore, Edward Muma Mwangala, a teacher from Zambezi Primary School, emphasized the importance of peace by saying, “We have to let them be aware of the dangers of early marriage and encourage the young people to concentrate on school work and become better citizens so that they can learn how to manage conflict without violence, respect all forms of life, and engage in social justice activities.” 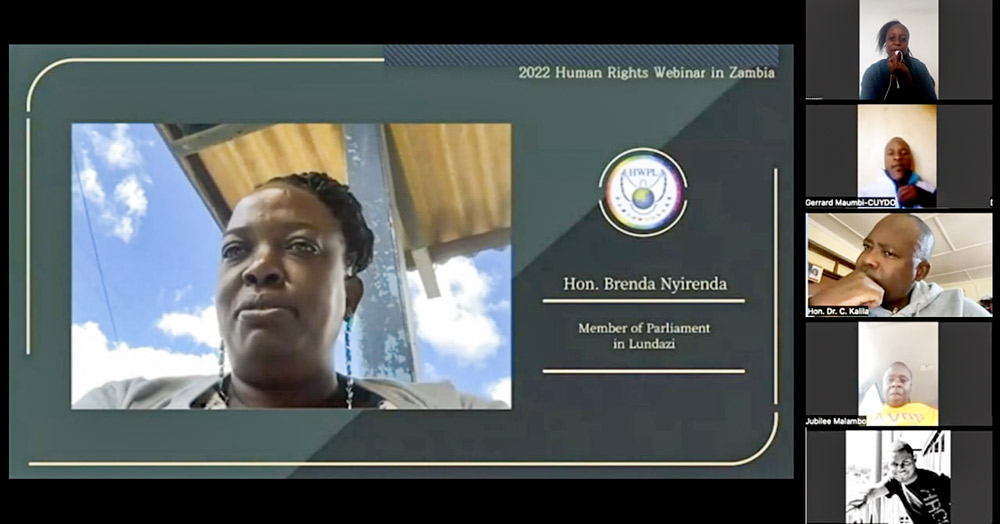 Brenda Nyirenda, a member of the CSE committee and a Member of Parliament of Lundazi, highlighted the importance of the role of the media to enact the Child Code Bill. She emphasized that media outlets should actively promote what is being done so that the information on the Child Code Bill can spread to people living in the outskirts of the city.

Dr. Christopher Kalila MP plans to give a lecture to the young people of Zambia to raise civil awareness on the enactment of the Child Code Bill at the Youth Empowerment Peace Workshop (YEPW) this coming August.