On May 14, the Yong-in branch office of HWPL’s South Seoul and Gyeonggi Branch held its first offline event since the COVID-19 pandemic. Under the theme of “Visiting the Three Sacred Places in Yong-in”, the event was held as a pilgrimage to the religious harmony and peace, starting from Simgokseowon Confucian Academy, and went through Sonkol Sanctuary, a Catholic sacred place, to the Seo-bong buddhist temple site.

The S. Seoul & Gyeonggi branch Yong-in branch office of HWPL hosted the event. This pilgrimage event was co-organized by Jeongam Association and the International Peace Youth Group (the IPYG) Yong-in branch office. It was attended by approximately 40 people who yearn for peace including Jin Yong-ok (master of Simgokseowon Confucian Academy), Seokcheongbo (chief priest of Bub-gi buddhist temple), Jeong Myung-seo (senior pastor of Bucheon Mahanaim Church); Lee Young-soo (lecturer in theology), Lee Hwang-zoo (lecturer in theology), and Hong Seung-young (lecturer in theology) who are Christian panels of the Yong-in WARP Office; Kim Hyeon A (manager of WARP office), Kang Myeong-gu (senior member of the study of scriptures), and members of HWPL and the IPYG.

At the opening ceremony ahead of the pilgrimage, Kim Hyun-a, manager of the WARP office of HWPL, quoted Chairman Lee Man-hee of HWPL, “People with seeds of peace and harmony can produce results of peace no matter how difficult it is” as “It is hoped that this event will set a good precedent for religious harmony. Let’s become one based on the values of peace.”

The second Catholic sacred site, Shrine of Sonkol, was a village where companions lived to escape Catholic persecution in the late Joseon Dynasty, and a memorial cathedral was built. It commemorates two French missionaries, Saint Dorie (surname Kim, Henri 1839-1866) and Saint Aumaitre (Peter, 1837-1866), who were martyred during the French Campaign Against Korea (1866). 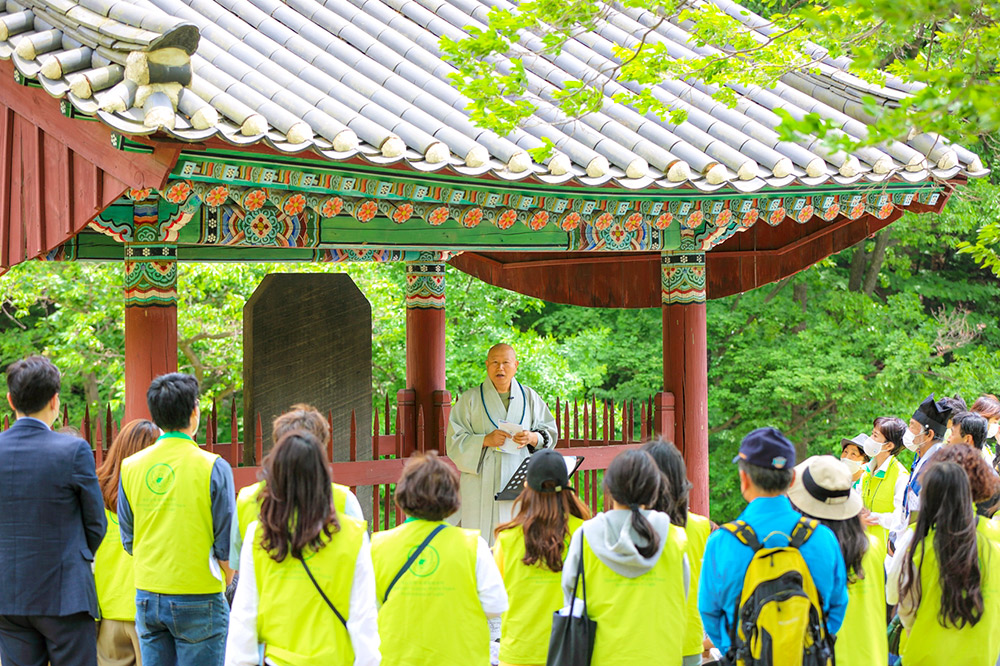 The last destination of the event was the Seo-bong buddhist temple site, a Buddhist sacred place. Seo-bongsa Temple is a temple located in the middle of Gwanggyosan Mountain, and there is a “Stele for State Precipitator Hyonpo at Seobongsa Temple Site” (National Treasure No. 9) built in 1186 (the 15th year of the reign of King Myeongjong of Goryeo Dynasty). In this place, Seokcheongbo, chief priest of Bub-gi buddhist temple taught participants about the penitence and basic teachings of Buddhism.

He also said, “I think it is encouraging and our future is bright to see young members of the HWPL to work for peace movement and realize love in Korea at a time when the world is stained with war and conflict”, “I hope young people will work hard to establish Korean history, national view, and world view for ourselves, family, society, and country.”

A member of the Yong-in branch office of the IPYG who participated in the three major pilgrimage in Yong-in, said, “It was beneficial to learn about the sacred places that I did not know well while living in Yong-in. It was a meaningful time to see the walls being torn down through understanding and communication through exchanges between religions,” they said.