Skip to content
Previous
Next
Published On: December 31st, 2022

On November 5th, 2022, the “HWPL World Interfaith Joint Prayer Conference: Prayer Conference for Peace in Russia & Ukraine” was held online over two sessions at 6 AM and 1 PM (UTC). 493 people of religion from around the world, including 185 religious leaders, graced the event with their presence.

While the world bears witness to yet another terrible war due to the prolonged Russia-Ukraine war, HWPL has consistently held relay prayer meetings for peace since April 2022 to console the victims of war, to urge for the end of wars, and for peaceful coexistence.

Participants were first shown an opening video which captured the horrors of war and the pain of the victims in Russia and Ukraine. In the video, HWPL Chairman, Mr. Man-hee Lee, gave a message of peace to remind all of us why wars must be stopped and of our roles as citizens of the world, saying, “What we are responsible for, and what we must do in this era, is peace. We must ensure that countless young people are not killed again. If you don’t have power (or strength), let’s ask the heavens or borrow the power of the heavens for help.”

A *Russian Christian religious leader, who attended the prayer meeting despite the risks to his well-being, spoke out against the injustices of the war based on his faith and conscience as a person of religion. In his speech, he called for an end to the war and shared that: “I call out my voice for peace and reconciliation between Russia and Ukraine at this time. Citizens of both countries must speak out that this military war should be stopped. God wants us to live in peace.” (*Personal information of the speaker is withheld due to security concerns.)

This was followed by a speech by a Ukrainian religious leader, Vraja Hari Prabhu, Vice President of ISKCON in Ukraine and Moldova. Vraja Hari Prabhu stressed that we should not be wasting our lives in war and strife but remember that we are all brothers and sisters in this global community. In his speech, he said: “This is in direct violation of the dharma or religion that we see now in this war. And the saddest thing is that in the interval between life and death, we fight for what we did not bring with us and for what we will not take with us. Therefore, we should not waste time on wars and quarrels. We should serve the Lord and remember that we are all brothers and sisters.”

After the speeches, leaders of various denominations came out to console the victims for their sacrifices caused by the war, emphasizing that war and conflict were never God’s will, and wishing for a world of peace to come as soon as possible. Based on the universal message of peace and love in the sacred religious texts, the religious leaders emphasized that conflict and discord originate from the greed and desires of Man. It is the rightful duty of Man to repent and turn back to living in harmony and peace with each other, as taught by the Creator. 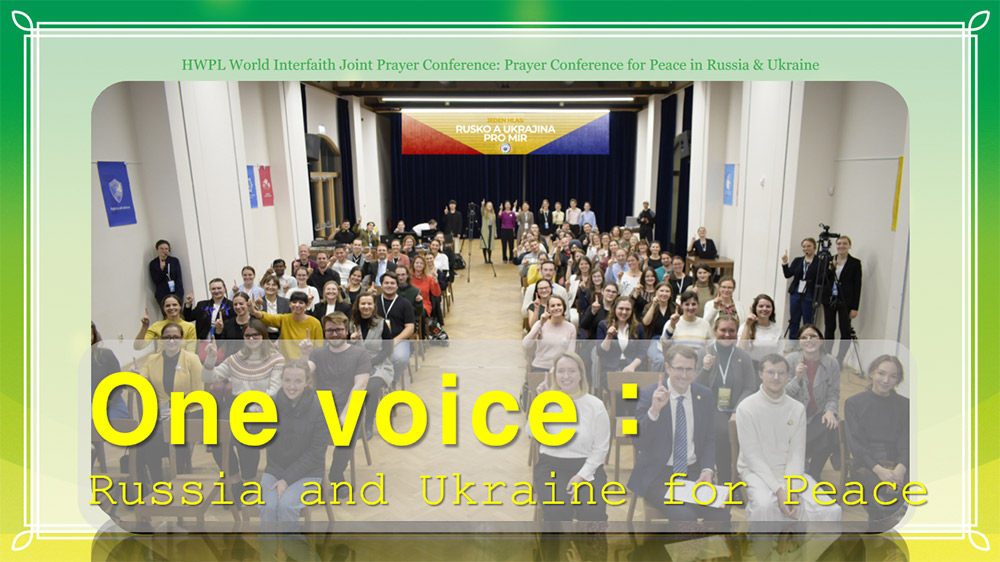 Towards the end of the conference, videos from the International Youth Peace Group (IPYG)’s campaign to stop the war between Russia and Ukraine were shown. News about the “One Voice for Peace” event in the Czech Republic, relay prayer campaign for peace, and prayers posted in real time during the conference through Padlet links were also shared. Participants of the Prayer Conference unanimously pledged to unite their voices to urge for peace.

Please click on the link below to see more details about the Prayer Conference and the speeches and prayers of various religious leaders for peace: