In Eastern Europe, divisions and conflicts caused by the confrontation of differing ideologies during the last century were overcome by the dedication of citizens and leaders during the times of change. As a symbol of the beginning of the Cold War and today’s long-lasting conflict, the Korean peninsula has been one of the major detriments to international peace. The recent Korean issues are on the rise in international society, so the leaders of Eastern Europe who led peaceful transition movements gathered together to discuss the peaceful reunification of Korea.

On May 19, the “High-Level Meeting of Former Political Leaders in Europe to Spread the Culture of Peace and Call for Support for the Peaceful Reunification of Korea” under the theme of “Solidarity of Empathy for Peace” was hosted at the Palace of the Parliament by HWPL in cooperation with the Institute for Advanced Studies for Culture and Civilization of the Levant led by Hon. Emil Constantinescu, the third President of Romania. 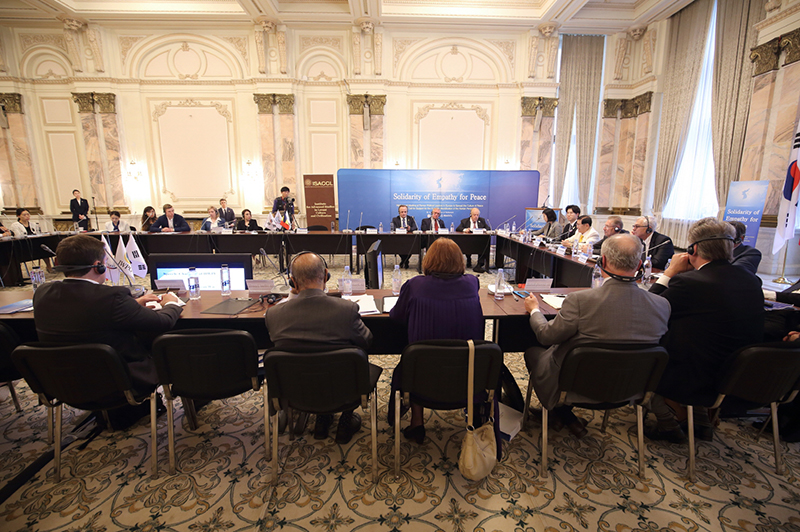 ▲ Discussing for ‘Solidarity of Empathy for Peace’

Chairman Lee said, “Currently our country is at a very crucial point. I confirm that achieving peace of the Korean Peninsula will bring peace to the world.” He added, “The wars will come to an end and peace will be achieved through the 10 Articles and 38 Clauses of the Declaration of Peace and Cessation of War (DPCW).” Chairman Lee appealed for the continuous support for the Reunification of the Korean Peninsula and World Peace and called on all in attendance to, “please join us in leaving a legacy of a world without wars to our future generations”.

“This event seeks to apply the efforts of the Eastern European states in overcoming conflicts and in the settlement of peace during the post-Cold War period to [promote] stability and peacebuilding in the Korean peninsula. The significance of this discussion is that experts in different sectors including former presidents, former and present ambassadors and academic professionals of international law, women and youth representatives and media participate and discuss plans for effective cooperation for peace,” said Kim Byoung Seok, the Chief Branch Manager of HWPL.

In his congratulatory speech, Hon. Pravin H. Parekh, Senior counsel of the Supreme Court of India said, “Chairman Lee did whatever he could do for peace for the last 5 years. Since we gathered here to cease war and achieve peace, I believe each one of us will be able to influence the UN in adopting the DPCW”.

In the event, HWPL highlighted international cooperation and civic participation in peacebuilding in relation to the culture of peace defined by the UN as “education for a culture of peace, understanding, tolerance and solidarity, democratic participation, free flow of information, disarmament, human rights, sustainable development, equality of women and men”. 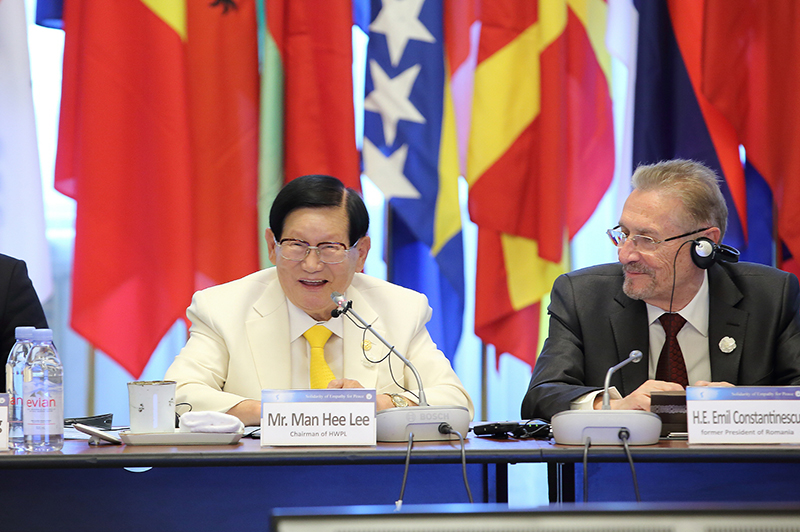 ▲ Chairman of HWPL with the Former President of Romania

In his speech highlighting the role of the international community in exchanging ideas, referred to as “cultural diplomacy”, Hon. Emil Constantinescu said, “The great humanity conversation must now be encouraged so that larger and larger groups of people could develop free flocks of ideas and knowledge worldwide. This vision can be developed only if representatives are able to act as the plurality of voices, questions and desires of billions of people participating it… An important milestone has been the cooperation since 2014 with Chairman Lee of HWPL associated with women and youth organizations which gave extraordinary impetus to the universal peace movement. This global movement promotes a culture of peace”.

Advocating peace and stability in the Korean peninsula has been pursued by HWPL since 2014 when a group of former heads of state from Eastern Europe were appointed as the HWPL Advisory Council at the 25th Anniversary Event of the Fall of Communism. In addition, this month HWPL has opened a series of peace forums in Ukraine, Germany, Sweden and Norway in collaboration with government officials and civil society representatives. In Germany and Sweden, members of the city council, youth leaders and citizens presented “peace letters” to support reunification and peace in Korea. According to HWPL, the peace letters of support collected around the world will be delivered to the leaders of the two Koreas.