Religious Leaders’ Efforts for the implementation of DPCW,
and current and future of online religious peace activities

Greeting to all family members of HWPL around the world. I am Syed Abdullah Tariq, the Founder and President of an NGO ‘WORK’ (World Organisation of Religions & Knowledge) in India which is active in promoting Interfaith Dialogue besides working for Communal Amity and Understanding between different Religious Communities. On this historical day of the 5th Annual Commemoration of the Declaration of Peace and Cessation of War (DPCW), I would like to congratulate HWPL and Chairman Man Hee Lee.

My dream is the Recreation of a New World for All Human Beings with no boundaries or restrictions for any one where all the present nations will be its administrative provinces. When I found out about DPCW (Declaration of Peace and Cessation of War) with its 10 Articles and 38 clauses for World Peace and HWPL’s resolve to make it legally binding for all countries through the United Nations, I was sure that it was the first step towards fulfilment of my dream.

At first it seemed almost impossible for all nations to agree to be bound by DPCW but the phenomenal growth of HWPL within a few years was also an astonishing feat in itself. In keeping with the heavenly and universally acknowledged principles of humanity, I myself and my organization resolve to extend our endless support to the DPCW. I also request all sensible, sincere, honest and unselfish religious leaders to strengthen the process of World Peace by joining HWPL in their respective countries. 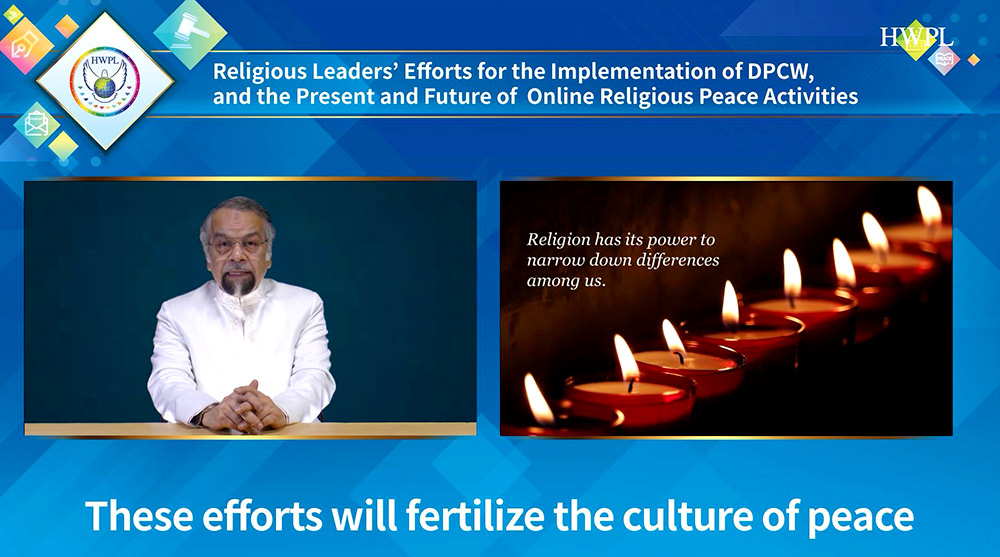 Meanwhile I was invited to attend the 4th Annual Commemoration of Sept. 18th WARP Summit in Incheon, Korea. I witnessed there a micro-world of hope, enthusiasm, passion and self-belief, ready to engulf a mini-world and ultimately erupting into a tsunami of revolution in a major-world. The kids from 5 years of age to a huge crowd of students to a sea of humanity, all motivated, disciplined and brimming with energy was a sight that reassured me that the legalization of DPCW by UN for its member states will become a reality in not too distant a future.

Our organization, WORK has supported and co-organised many HWPL events in Delhi and Rampur in India, before and after my Incheon visit. The very first engagement and cooperation we made for the implementation of DPCW happened in March, 2018 when there was a conference in Delhi for the celebration of the 2nd Annual Commemoration of the DPCW. I was invited as a speaker, and my organization members attended the event to show our support to the work of HWPL. At that event, I presented a declaration to encourage India and global citizens to endorse the realization of DPCW. 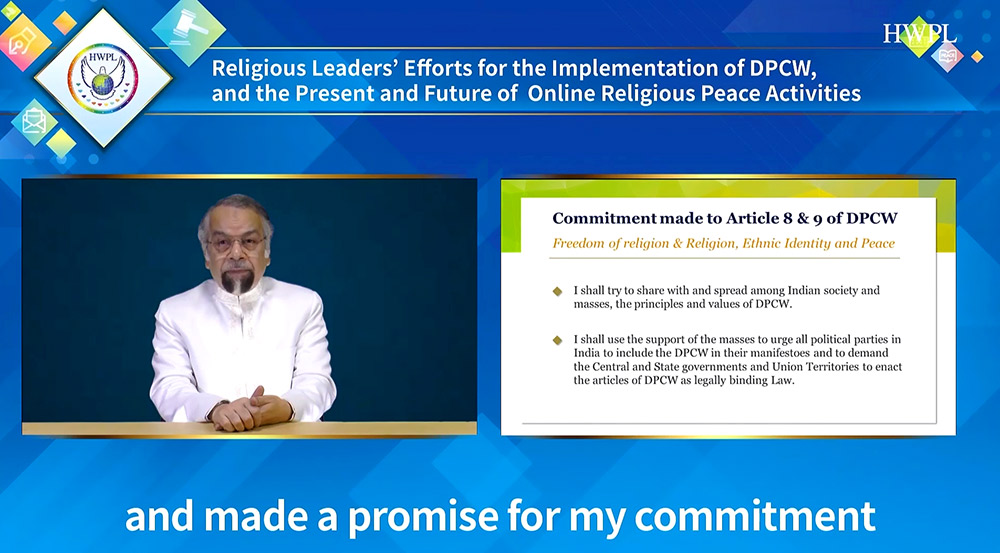 In the conference, I presented a proclamation in the capacity of being a religious leader, referring to Article 8 and 9 of DPCW which guarantee freedom of religion and peaceful coexistence of religions and ethnic groups as well as presented a plan and made a promise for my commitment to the implementation of the DPCW. I promised that if my plan was approved, I shall try to share with and spread among Indian society and masses, the principles and values of DPCW, and use the support of the masses to urge all political parties in India to include the DPCW in their manifestoes and to demand the Central and State governments and Union Territories to enact the articles of DPCW as legally binding Law.

In order to keep that promise, in the same year, my organization WORK conducted a peace walk in Rampur along with the 4th Annual Commemoration of the Declaration of World Peace. We made placards and shouted slogans in our peaceful rally, and it was witnessed by citizens and the media in India. Through these local activities, more than 1,000 Rampur residents voluntarily applied for membership of HWPL, and whenever there is an event of HWPL in the local community, they are ready to join the event with full support. In March, and September of 2019, there were 2 different events in Rampur and Delhi as the parts of “Legislate Peace Campaign.”

We are now living in the devastating time of COVID-19 era, and the virus has changed many aspects of our lives including the way of continuing peace activities in enhanced authoritarian tendencies of the governments the world over. This tough situation could have stopped HWPL to halt its endeavours for peace, but it has extended the activities even wider through online platforms. Every month, there is an online World Alliance of Religions’ Peace Office meetings, and ironically but reassuringly, I was informed last year that more new panellists have joined this initiative online. Also, there was a webinar surpassing countries and departments of HWPL in the last year. So it was online methodology again that connected us to other HWPL workers in different countries and assured us that we are working as one.

About 2021, we need to plan and create opportunities and think of new ways to surmount those that happened in 2020. Whenever humanity faces a difficult time era, there has been religion which gives them hope and courage to overcome crises. Religion has its power to narrow down differences among us, and unite us to be strong enough to break through obstacles. HWPL is leading a great initiative that can bring changes in the world by calling us all as advocates of peace. Global community should be aware of it, and get involved in it. So I request and encourage world religious leaders to contribute to extension of online activities of HWPL, and educate religious followers to become family members of HWPL as well. These efforts will fertilize the culture of peace when the current generation is in desperate need for hope.