Skip to content
Previous
Next
Published On: September 24th, 2018

The expectations of achieving peace on the Korean peninsula have greatly risen in light of the recent news of the success of the third Inter-Korean Summit held in Pyongyang and the signing of the “Pyongyang Joint Declaration of September 2018”. To support the peaceful unification of the Korean Peninsula, a long-cherished wish of both Korean citizens and all people across the globe, former presidents from Eastern Europe gave a special lecture in Seoul that was held under the topic of achieving peace on the Korean Peninsula and around the world.

For this special lecture, H.E. Ivo Josipović, Former President of Croatia, and Hon. Emil Constantinescu, Former President of Romania, both of whom experienced times under Communist rule and the transition to democracy, gave presentations on September 16th and September 20th respectively in the presence of around 2,000 Korean citizens.

Path to Peace in the Korean Peninsula: Special Lecture by H.E. Ivo Josipović, the Former President of Croatia

On September 16th, the third president of Croatia H.E. Ivo Josipović gave a special lecture on the topic of the “Path to Peace in the Korean Peninsula”, which centered on the role of cultural exchange to achieve the successful reconciliation of Korea, at the Grand Hilton Hotel in Seoul. 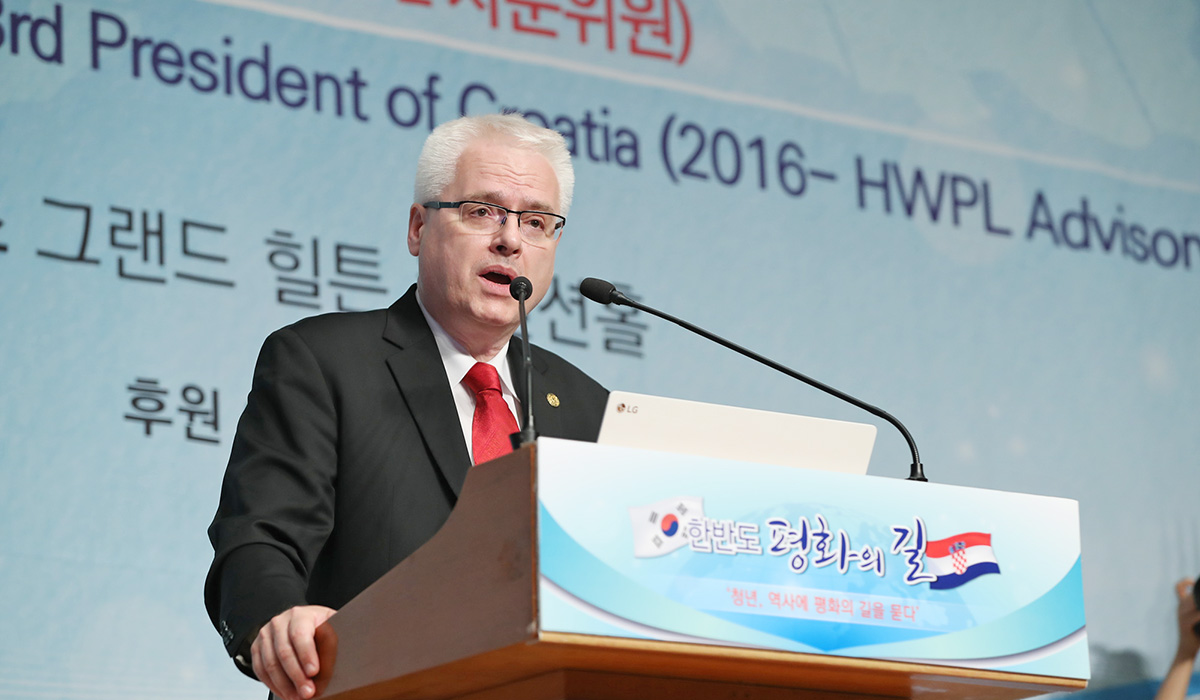 According to the lecture, Croatia is a country that experienced mass atrocities as part of the Holocaust carried out the by Nazis during World War II. At that time music was used as a tool for Nazi propaganda; however, music also served as a method to inspire and build up the resistance and protests. H.E. Ivo Josipović explained the power of culture in the achievement of peace in the currently divided peninsula by introducing about this historical aspect of the former Yugoslavian region.

“I think music, especially traditional folk music that is derived from the same cultural roots, is a tool for sharing the same sentiments that are held by individuals from both sides of the border. Although many countries, including the United States, China and Japan, support the unification of Korea it is necessary for the two leaders to meet and discuss face-to-face. I believe that we can understand one another and accept each other’s differences through cultural exchanges, such as music and sports.”

He also emphasized the important role of political leaders to cease the ongoing conflicts in the world, citing the past case of the treaty signed by Croatia, Serbia and Bosnia and Herzegovina. In relation to the establishment of a legally binding international law for peace, he added, “Presenting the Declaration of Peace and Cessation of War (DPCW) to the United Nations as a resolution, with our intention to build peace in the world, is novel and important.” 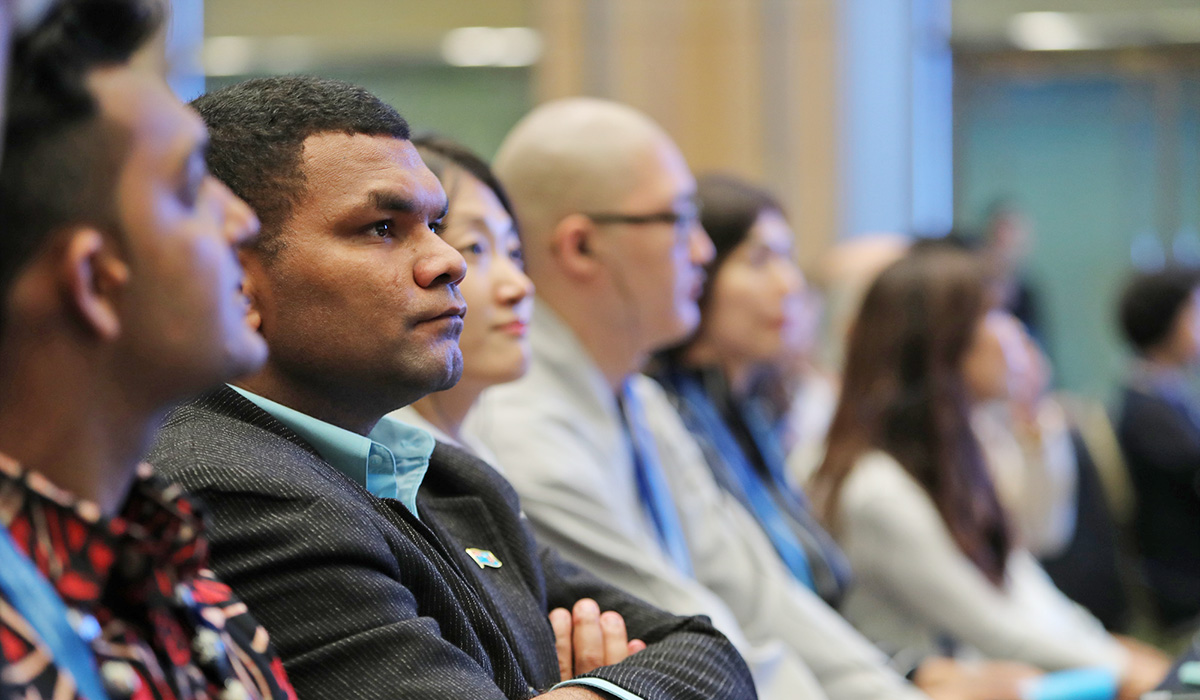 Suggestions on the Peaceful Reunification of the Korean Peninsula Based upon the Experiences throughout the Transition Period of Eastern Europe: Special Lecture by Hon. Emil Constantinescu, the Former President of Romania

On September 20th, the “Lecture Concert for Peaceful Unification on the Korean Peninsula” was held with the third president of Romania Hon. Emil Constantinescu. The International Peace Youth Group (IPYG), The Institute for Advanced Studies in Levant Culture and Civilization (ISACCL), H.E. Gennady Burbulis, Former State Secretary of Russia and President of the Baltic-Black Sea Forum, and Petru Lucinschi, Former Moldova President, also attended and gave their congratulatory messages, lighting up the entire event.

Former President Hon. Emil Constantinescu prepared his speech under the theme of “Suggestions on the Peaceful Reunification of the Korean Peninsula Based upon the Experiences throughout the Transition Period of Eastern Europe”, beginning his address with the memories of life under tyranny. 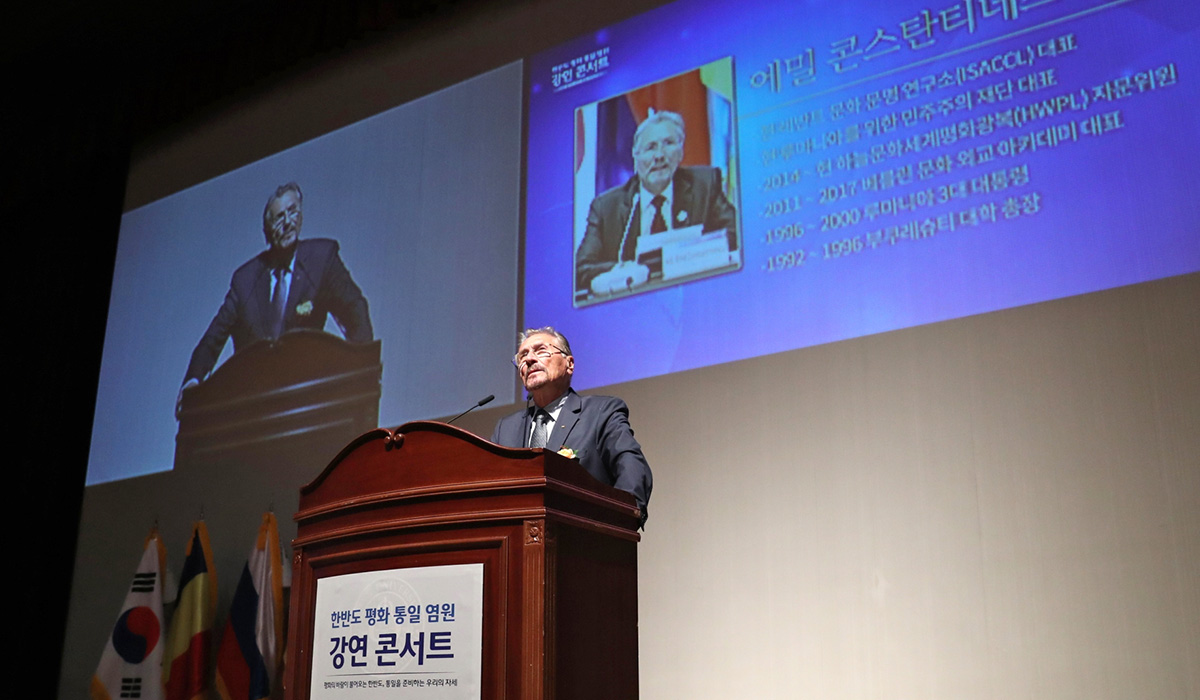 He stated, “I lived under a communist dictatorship that deprived the country and its citizens of freedom for 50 years. People were not allowed to move about freely and the political police monitored their private affairs, invading the privacy of all citizens. Both Romania and Korea were greatly influenced by World War II. This war caused the death of more than 25 million soldiers and over 73 million civilians, as well as created huge economic losses and led to the destruction of many world cultural heritage sites. The atrocities of the two wars in the first half of the 21st century proved to be insufficient for leaders to understand that peace cannot be strengthened only by managing frozen conflicts,” explaining the darkest times of Romania.

He then continued by reminding all in attendance of the power of the people who fought for freedom stating, “The incredible lack of fear and the solidarity of people forced the dictator to flee and freedom was gained. In one of history’s bright moments, people were willing to sacrifice themselves for the ideals of freedom and democracy. The answer regarding the future of freedom and democracy is the choice of each generation and, in the end, of each of us.”

He concluded the lecture by proclaiming, “In order to achieve the peaceful reunification of the Korean Peninsula, leaders, politicians and even the youth must have the consciousness to achieve peace.” 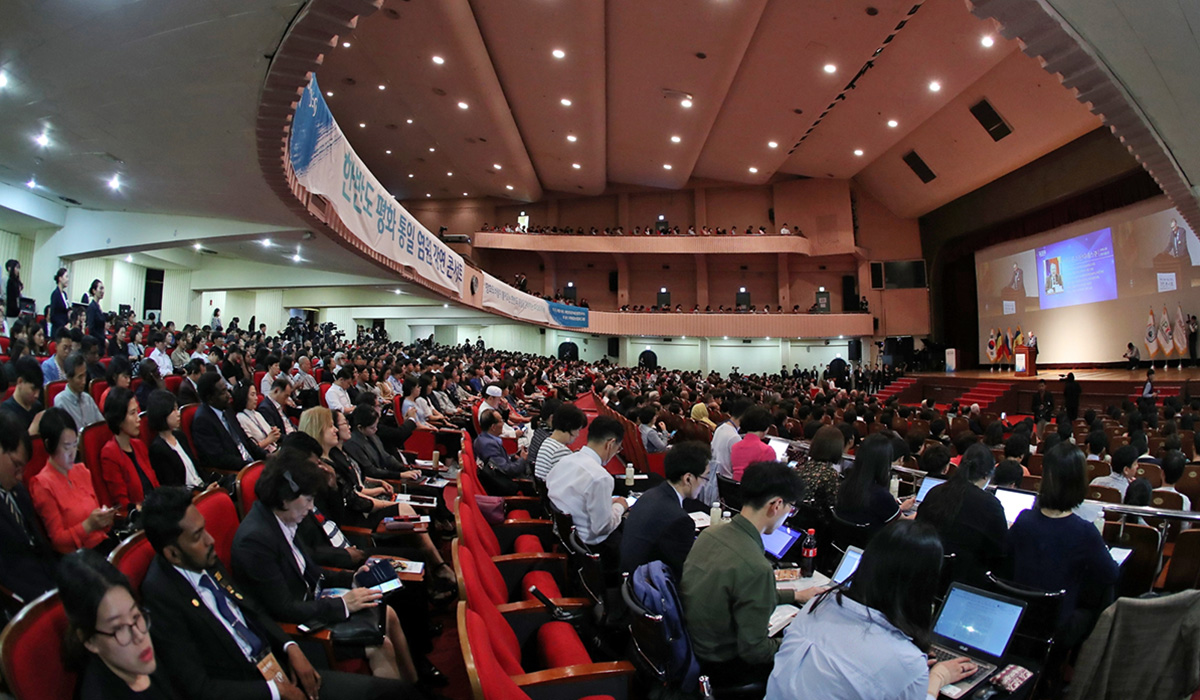 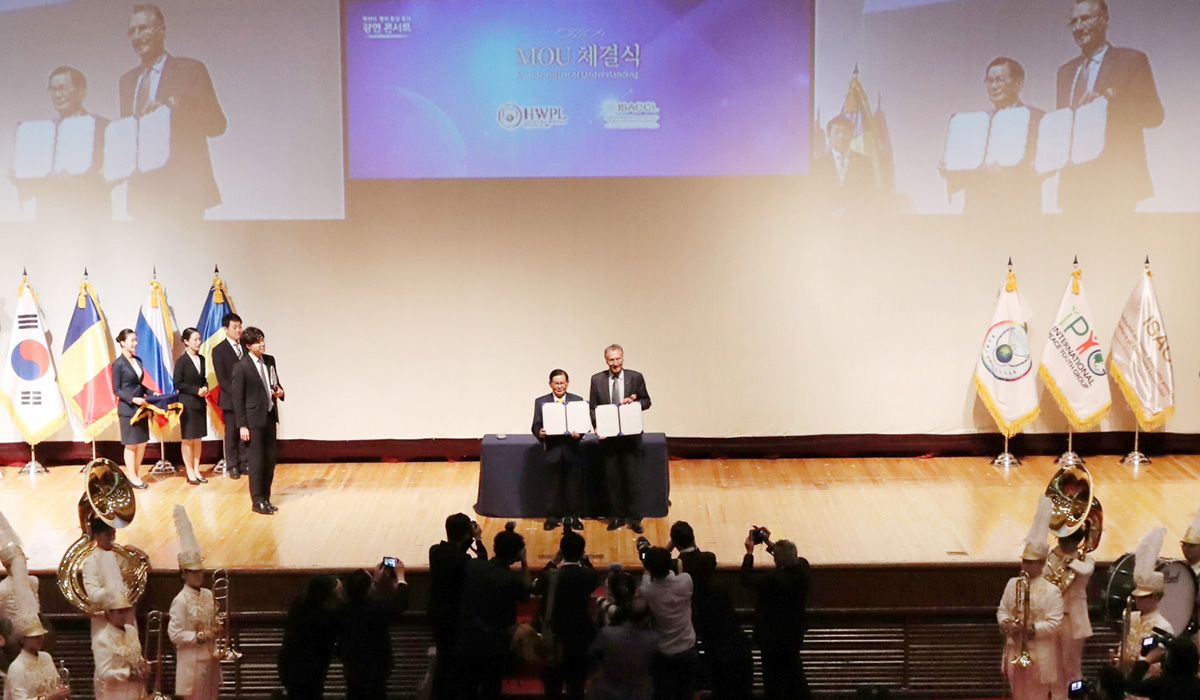 As the final program of the event, an MOU promising further cooperation for peace in the Korean Peninsula and the world was signed between ISACCL, represented by its current president Hon. Emil Constantinescu, and HWPL, the international peace NGO that IPYG is affiliated with.

HWPL’s Chairman Man Hee Lee then delivered his congratulatory message to the audience stating, “In the Korean War, 4 million citizens were killed. Should we continue to point our guns and kill each other more? We must put down our weapons. The two leaders should hold hands in peace without having to feel the need to be noticed by any country in the world. We must achieve the peaceful reunification for the people of our country.”

Chairman Lee also expressed his gratitude to the two leaders saying, “I would like to express my sincere thanks to the two former presidents who delivered good lectures to the citizens of Korea with great concern and support. Now all people from all levels of society should become the messengers of peace to bring peace one step closer to us.”