Heavenly Culture on Earth, Onward to a World of Lasting Peace!

On September 18, 2018 around 50,000 members of the peace family gathered from around the world at the site of the 2018 HWPL World Peace Summit: 4th Anniversary of the WARP Summit. For the achievement of world peace, there were various performances held supporting peace and many peace messages were delivered amidst immense cheers and waving flags, representing all countries around the world.

The ceremony opened with a powerful countdown while people from around the world gathered together with one heart to enter the gate of peace that would soon be opened. The Peace Gate, the representative symbol of the World Peace Summit, stands for the entrance to a country that is without war, one where peace is truly realized. Through this gate all people are able to enter and experience the image of a time when peace has finally been achieved. The enthusiastic cheers of the members of HWPL and all the guests from around the world who were in attendance at the event announced the beginning of a peaceful era that mankind has long aspired to reach. 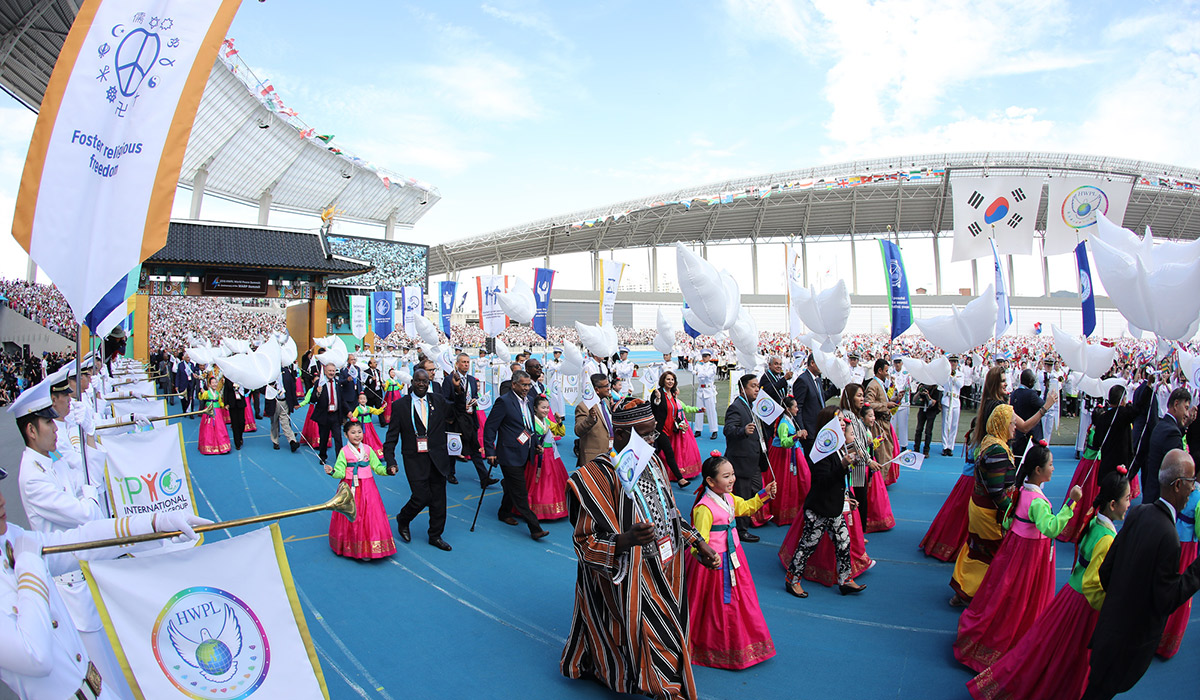 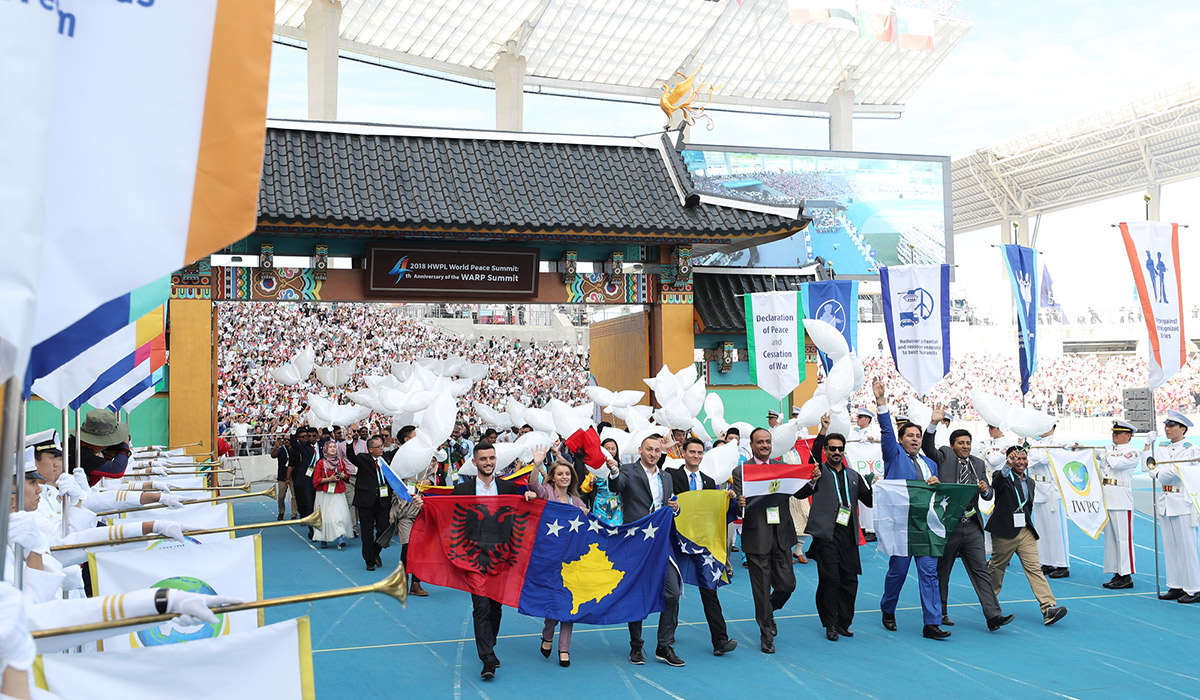 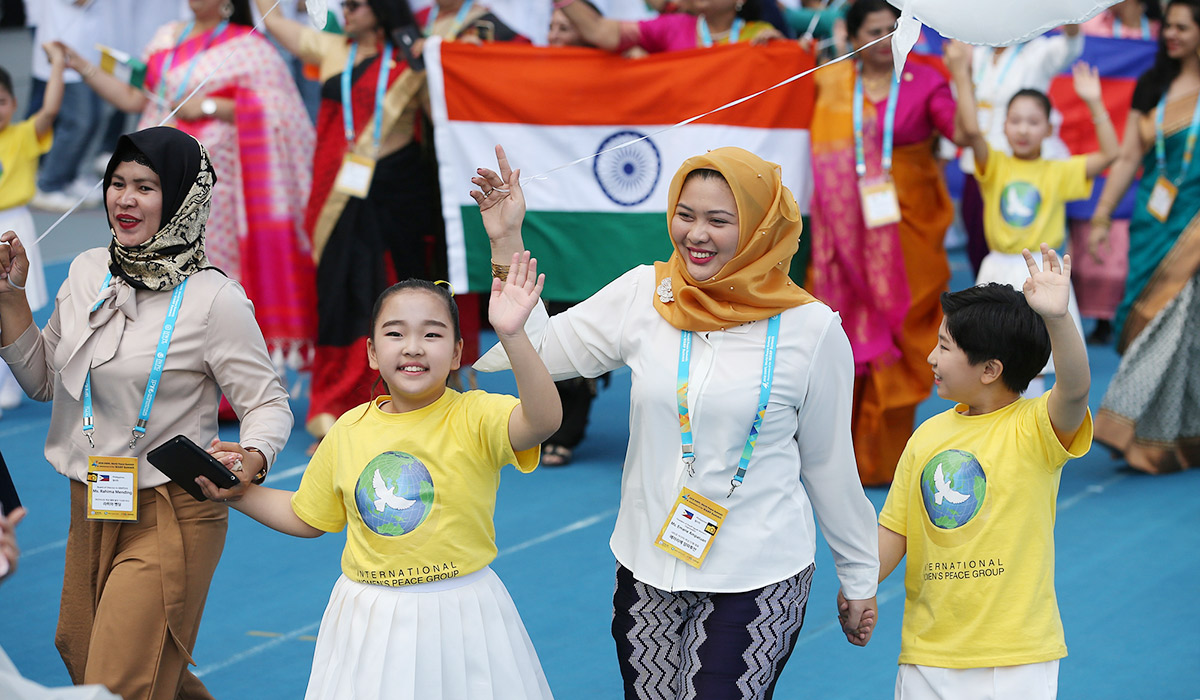 The Peace Gate that allows people to pass from the world of war to the world of peace was opened and the International Peace Youth Group (IPYG) was the first to enter. Representatives from 60 youth organizations from around the world came carrying white dove balloons in their hands and added life to the stadium with their bright smiles. Next, women leaders from around the world who have been working alongside the International Women’s Peace Group (IWPG) entered while holding the hands of children that wore yellow T-shirts, the official color of IWPG.

Next came the world’s religious leaders. They made a vigorous entrance alongside children dressed in the peace education uniforms, representing the work of the religious leaders to teach them about religious scriptures and the culture of peace.

The messengers of peace in the stadium then shouted “We are one” at the top of their lungs as the world’s top political leaders, including presidents and prime ministers, who are part of HWPL’s International Law Peace Committee entered. These individuals have greatly cooperated with HWPL and openly shared their abundant experience and knowledge.

Last, but definitely not least, HWPL Chairman Man Hee Lee, IWPG Chairwoman Hyunsook Yoon and IPYG General Director Youngmin Chung entered the stadium together. Along with all of the honored guests who entered the stadium, they flew white dove balloons, symbolizing peace, and a commemorative photo of the event was taken. 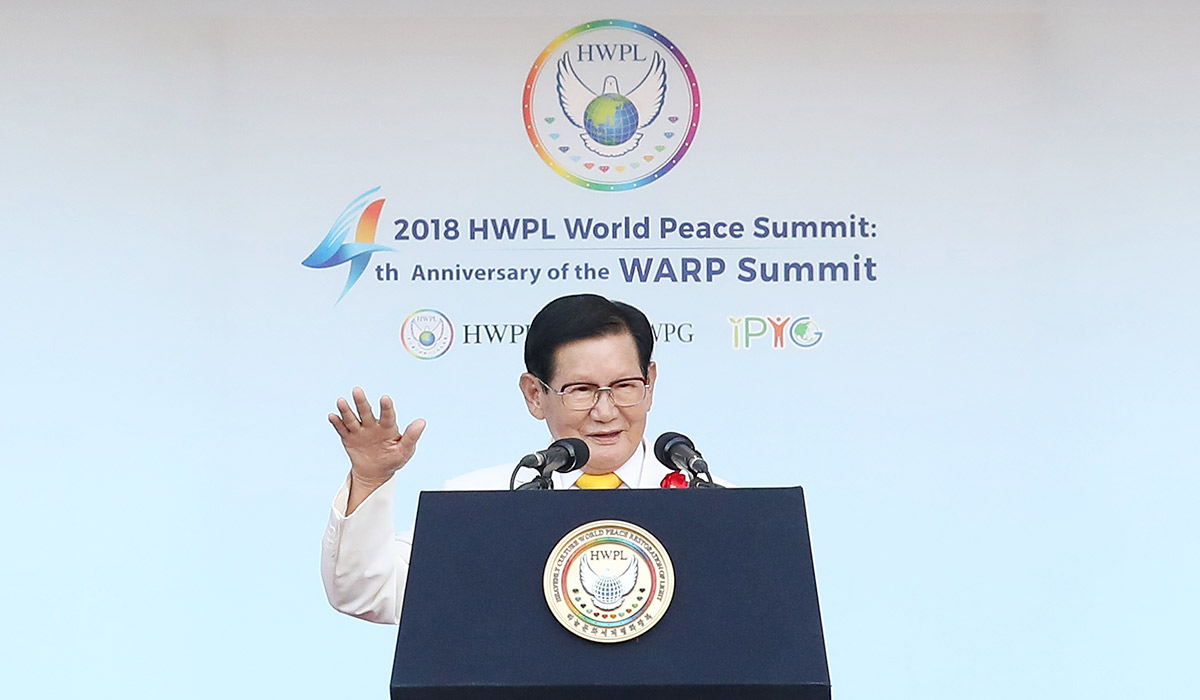 Mr. Man Hee Lee, HWPL Chairman
I am sincerely grateful to the members of the HWPL Advisory Council (all the distinguished guests), the International Law Peace Committee, the HWPL publicity ambassadors, and the press. Their unwavering support and efforts have made known HWPL’s Declaration of Peace and Cessation of War (DPCW) all around the world to the point that everyone has heard of it.

We, the peace messengers of HWPL, have also carried out the peace work relentlessly across the globe and promoted the DPCW.

I have noticed that no one in this world wanted war, but everyone wanted peace. Hence, I am certain that peace will be achieved. 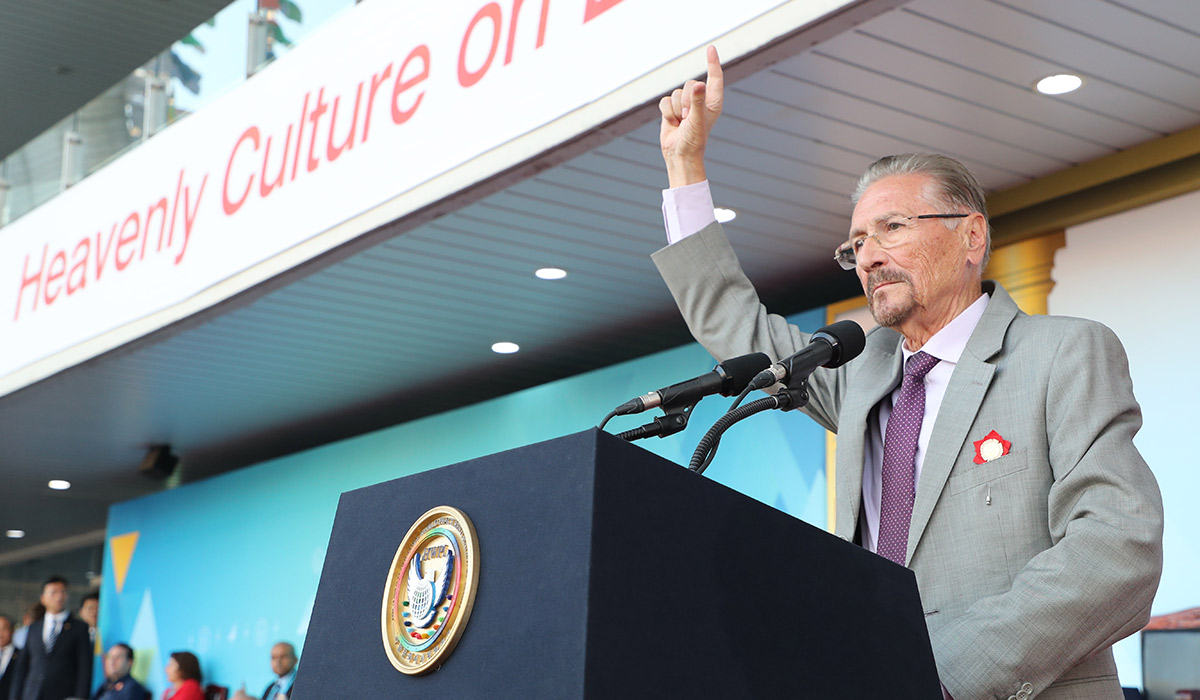 The event which is taking place today at this stadium is mainly addressed to the youth, who do not want to be forced by their countries’ leaders to fight against each other, and the women who would like to protect, not only themselves, despite being innocent victims, but to protect also their husbands, children and brothers from the horrors that any war inevitably brings about. Youth and women can become the most persuasive advisories of peace in the present and in the future.

Both avoiding war and establishing peacebuilding processes require a laborious effort to create a culture of solidarity outlining a pragmatic style in which the statements should followed by effective actions. The fact that so many distinguished representatives of the world’s public opinion, religious leaders, politicians, diplomats and cultural personalities, are today gathered represents such an efficient action.

Differently from 4 years ago we now have more people, are more united, and are more determined to stop the wars wherever they are. I believe that the Declaration of World Peace proclaimed in Seoul can get everyone around the world, no matter if they are men, women, youth or children, ready to unite under the mantle of peace and take the responsibility to promote the message of peace to the entire world. We are one. 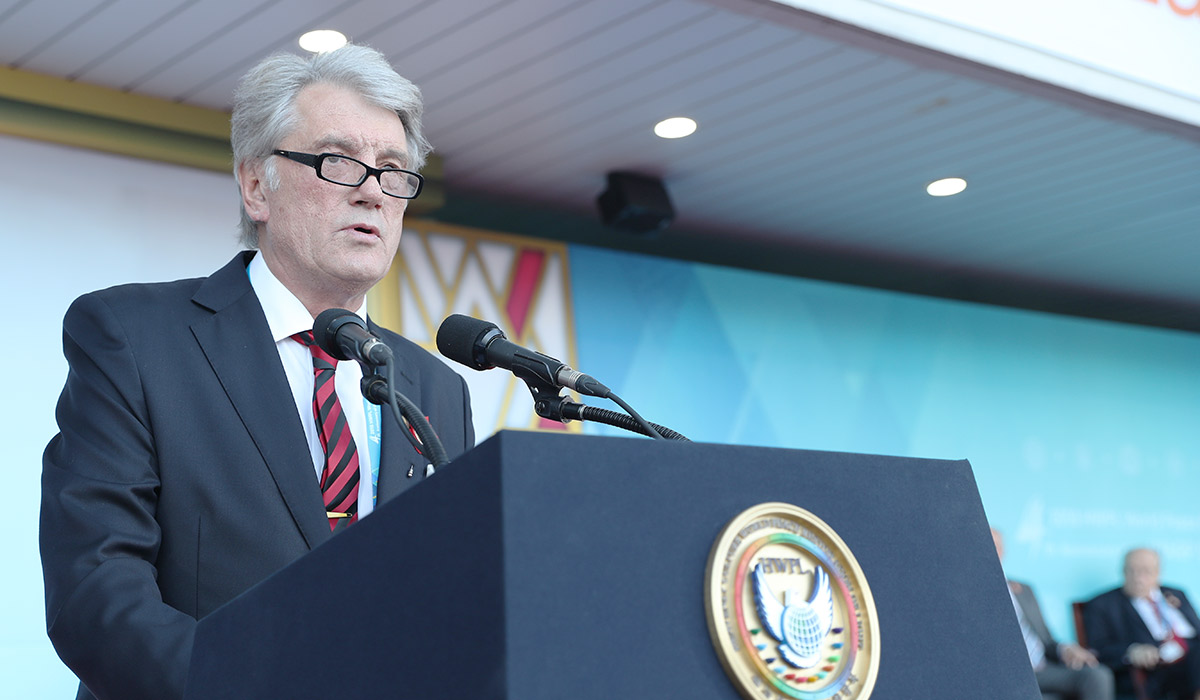 I am deeply grateful to be able to implement the cause of peace in a specific way. This is truly a worthy cause. I was deeply impressed to see the DPCW with its refined and profound wisdom. I think it is worth the support from all leaders of the world. This is because the DPCW is a perfectly balanced document that was drafted through the great effort of international legal experts and is of fundamental value. 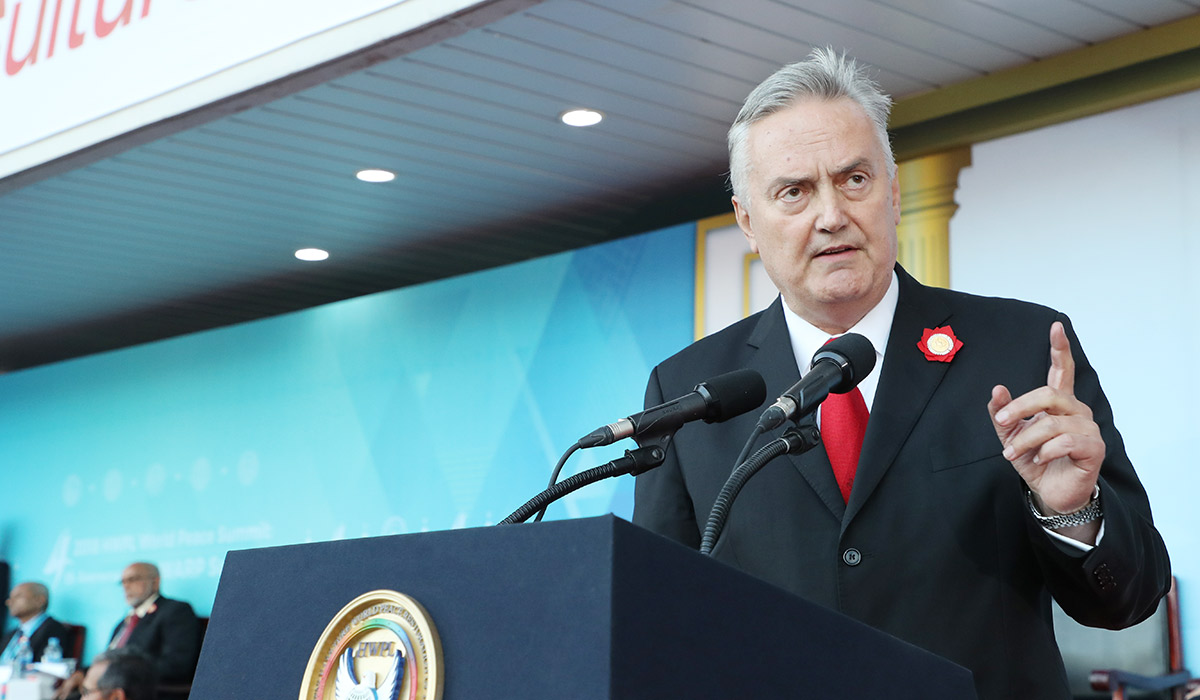 But we should always have in mind that war and atrocities, crime and genocide are not committed by the ordinary soldier who was pulling the trigger, but by the evil minds and leaders who are misusing their followers for their own personal criminal gain or vanity.

Also, that justice and rule of law are the best conflict prevention mechanisms. Peace is justice in action. 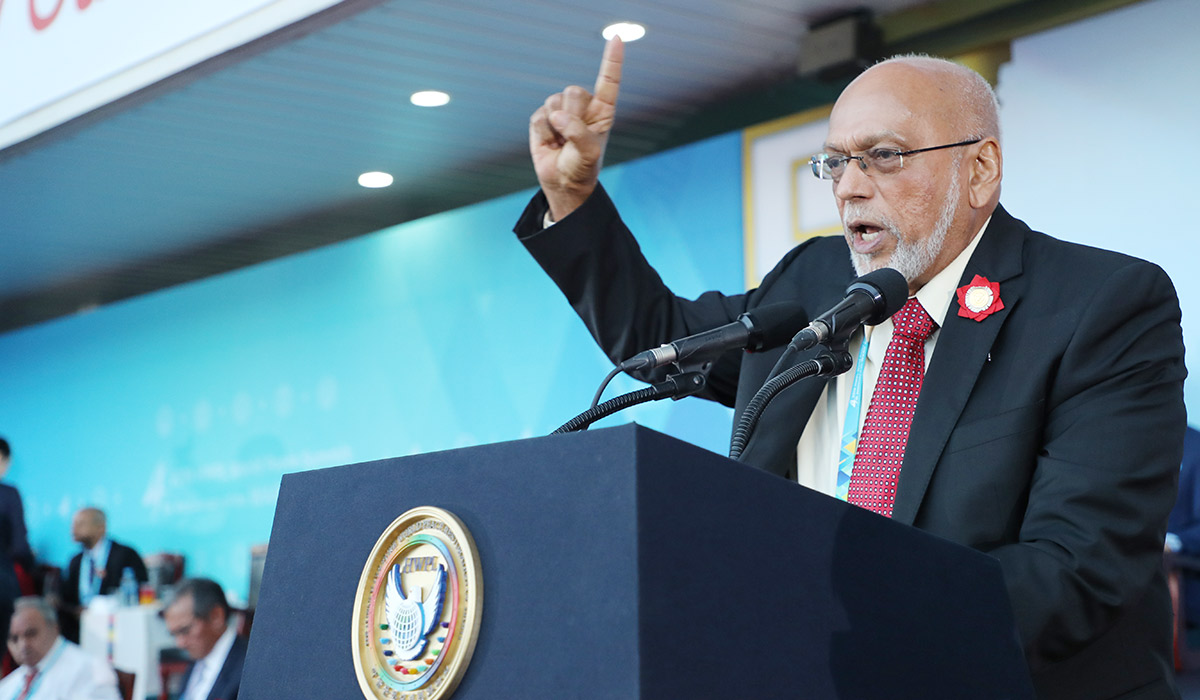 I am particularly happy that one of the emphasis of your work is to get ordinary women and men involved in the work and struggle for world peace. Many times we have seen that it is through our collective voices and the representation of progressive leaders that changes can be made and resources can be diverted to raise the quality of life and standard of living of human kind. 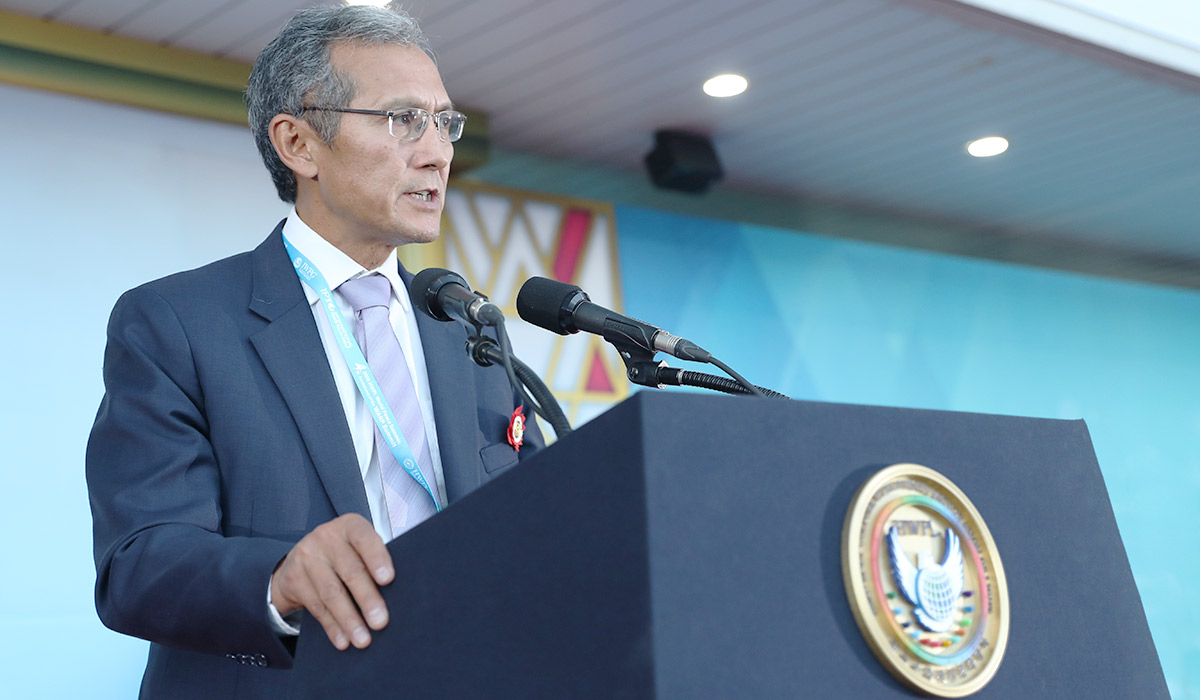 There is an old saying in Korea: “A word is like a seed”. Once this seed is planted it grows and bears fruit. If we plant the seeds of peace in people’s hearts and in the hearts of global citizens all around the world, this will bear fruit and emerge as peace. Let’s keep doing this with HWPL. Let’s keep working. Tell the leaders of each country to make peace for the society. We are one.