Skip to content
Previous
Next
Published On: April 26th, 2019

Syria is preparing to enter its ninth year 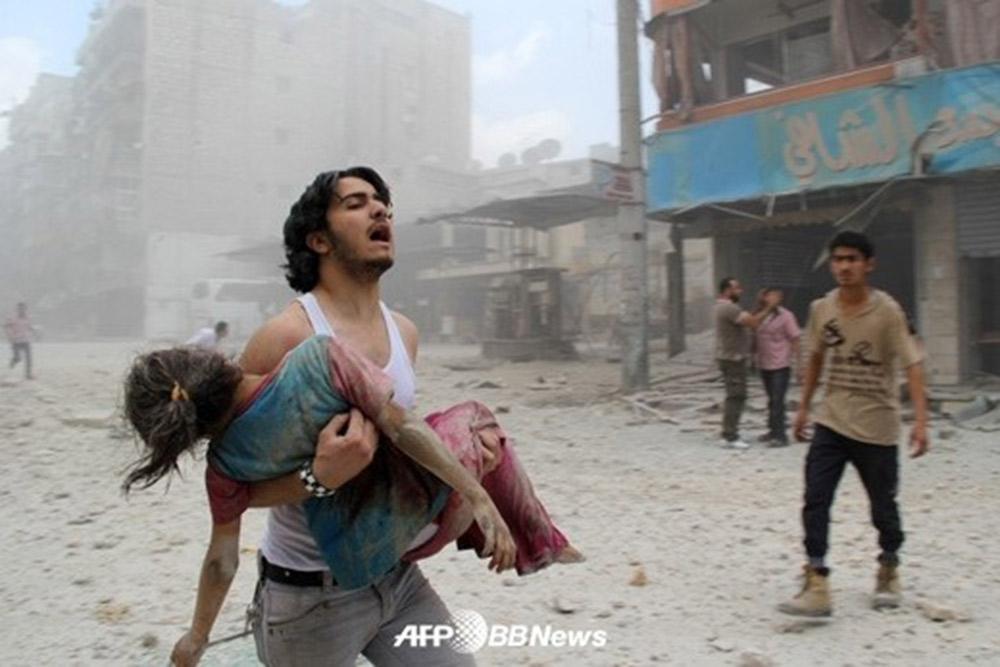 More than 800,000 civilians killed in Syria, nearly 2 million wounded, and hundreds of thousands of detainees in Syrian government prisons only because they expressed their views in peaceful and civilized ways.

But the Syrian government used various kinds of weapons to suppress peaceful demonstrations demanding freedom, justice and dignity, which led to the transformation of the conflict into armed conflict.

Millions of displaced people and Syrian refugees have been deployed in countries around the world, especially Europe and Turkey, which received the largest number. The number of refugees reached 6 million Syrian refugees, including 1 million in Germany and 4 million in Turkey, fleeing violence and war in Syria. 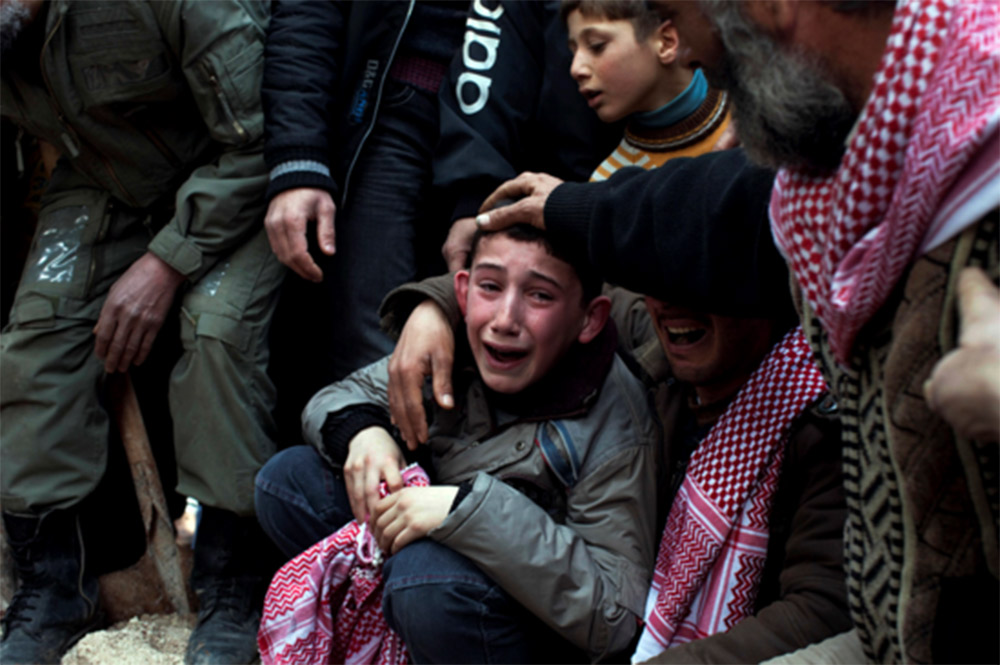 The United Nations Office in Geneva, Switzerland, hosted a meeting of the working group for Syria on 30 June 2012, at the invitation of Kofi Annan, the Joint Envoy of the United Nations and the League of Arab States to Syria.

The final statement stressed the need to pressure all parties to implement the plan of the six items known as the “Annan Plan”, including the cessation of “militarization of the crisis” and that “the solution is a political way and through dialogue and only negotiations”.

The Secretary-General of the United Nations, the Secretary-General of the League of Arab States, the Foreign Ministers of the Russian Federation, Turkey, China, France, Qatar, Iraq, Kuwait, the United Kingdom, Northern Ireland and the United States and the High Representative of the European Union for Foreign Affairs and Security Policy as the Working Group for Syria, The United Nations and the League of Arab States to Syria.

The Working Group for Syria issued a final communiqué, sent by UN Secretary-General Ban Ki-Moon to the UN General Assembly and the UN Security Council on 5 July 2012.

The text of the statement

The members of the group strongly condemned the continuation and escalation of killing, destruction, human rights violations, the non-protection of civilians and the influx of more Syrian refugees.

The member of the Working Group for Syria agreed on several principles and objectives to resolve the Syrian crisis through peaceful means, through dialogue and diplomatic efforts. However, the Syrian government continued to use violence against the Syrian people, which exacerbated the crisis and killed more civilians under the pretext of fighting armed terrorist organizations.

Members of the Working Group took steps and measures to ensure full implementation.

They agreed on principles and guidelines for a political transition process that would meet the legitimate aspirations of the Syrian people and agreed on actions they could take to implement the above in support of the efforts of the Joint Special Envoy to facilitate a political process.

The steps and measures identified by the parties to ensure the full implementation of the six-point plan and Security Council resolutions, including the immediate cessation of violence in all its forms, include:

1. The Parties shall implement fully the six-point plan and the Security Council resolution. To this end:

All parties must again commit themselves to a permanent cessation of armed violence – in all its forms and to the implementation of the six-point plan immediately and without waiting for action from other parties.

The government and separatist groups must cooperate with the United Nations for – monitoring in the Syrian Arab Republic.

The cessation of armed violence must be reinforced by immediate, credible and visible – actions taken by the Government of the Syrian Arab Republic to implement the other provisions of the six-point plan, including:

1. The release of peaceful detainees who participated in peaceful activities and expressed their opinion in non-violent civilized ways.
2. Ensure freedom of movement throughout the country for journalists and ensure that they are granted visas in accordance with a non-discriminatory policy.
3. Respect for freedom of association and the right to peaceful demonstration as guaranteed by law;
4. All parties – in all circumstances – must show full respect for the safety and security of United Nations Observer Mission in the Syrian Arab Republic and cooperate with the Mission and facilitate its task fully in all cases.
5. In all circumstances, the Government must provide all humanitarian organization with immediate and full access for humanitarian reasons to all areas affected by the fighting.

● The members of the working group agreed on the “Principles and Guidelines for a Syrian-led transition” as set out below:
● Any political settlement that must provide the people of the Syrian Arab Republic with a transitional process:
● Provides a future perspective that can be shared by all in the Syrian Arab Republic.
● Stresses clear steps according to a definite timetable towards achieving that perspective.
● Can be carried out in an atmosphere of safety for all, stable and calm.
● Can be reached quickly without further bloodshed, and be credible.

The vision for the future:

Syrians want to establish a state:

● Be democratic and pluralistic, where political parties can be established.
● Comply with international human rights standards, judicial independence, accountability of governors, and the rule of law. It is not enough to simply formulates such an obligation. Mechanisms need to be made available to the people to ensure that the governors meet those obligations.

-Provide opportunities and equal opportunities for all. There is no room for sectarianism or discrimination of ethnic, religious, linguistic or other grounds. Fewer communities must ensure that their rights are respected.

Steps in the transition process:

The conflict in the Syrian Arab Republic will not until all parties have ensured that there is a peaceful path towards a common future for all in the country. It is therefore essential that any settlement contain clear and irreversible steps followed by the transition process in accordance with a specific timetable.

The main steps of any transition include:

● Establish a transitional governing body that can create a neutral environment in which the transition process is moving. And that the Transitional Governing Body exercise full executive power. It could include members of the current Government, the opposition and other groups, and should be formed on the basis of mutual consent.
● The Syrian people decide the future of the country. All groups and components of society in the Syrian Arab Republic must be enabled to participate in the process of national dialogue. This process must not only be universal but must also be meaningful, that is, its main results must be implemented.
● On this basis, constitutional order and the legal system can be reconsidered. And to present the results of the constitutional drafting to the referendum.
● After the establishment of the new constitutional order, it is necessary to prepare for and conduct free, fair and pluralistic elections for new institutions and institutions established.
● Women must be fully represented in all aspects of the transition process

● Consolidation of full calm and stability. All parties must cooperate with the Transitional Governing Body to ensure a permanent cessation of violence. This includes the completion of withdrawals and the question of the disarmament, demobilization and reintegration of armed groups.
● Take concrete steps to ensure the protection of vulnerable groups and take immediate action to address humanitarian issues in areas in need. It is also necessary to ensure that the release of detainees is completed expeditiously.
● Continued government institutions and qualified staff. Public services must be maintained or restored. This includes – including the army and the security services.

However, all government institutions – including the intelligence services – must act in accordance with human rights standards and professional standards, operate under the highest leadership of public trust and under the authority of the Transitional Governing Body.

It is also necessary to prepare a comprehensive set of transitional justice tools, including compensation for or rehabilitation of victims of this conflict, and to take steps for national reconciliation and amnesty.

It is the people of the Syrian Arab Republic who must reach a political agreement, but time is running out. It is clear that:

● The sovereignty, independence, unity and territorial integrity of the Syrian Arab Republic must be respected.
● The conflict must be resolved through peaceful dialogue and by negotiation only. The conditions conducive to a peaceful       settlement must now be created.
● The bloodshed must stop. All parties must reaffirm their commitment in a credible manner to the six-point plan.

● It is the duty of all parties to deal honestly with the Joint Special Envoy. The parties must be ready to provide practical interlocutors to accelerate work towards a Syrian-led settlement that meets the legitimate aspirations of the people.
● The process must be inclusive, and the views of all components of Syrian society can be heard with regard to the formulation of a political settlement for the transition process

The organized international community – including the members of the Working Group – stands ready to provide substantial support for the implementation of the agreement reached by the parties.

Such support could include international assistance under a United Nations mandate if so requested. Substantial funds will be available to support reconstruction and rehabilitation.

Action agreed upon by the members of the Working Group to implement the following:

The members of the working group will move – as appropriate – and exert concerted and concerted pressure on the parties in the Syrian Arab Republic to take the steps and measures outlined in the above paragraph.

All these points raised in the initiative of the six points did not abide by the Syrian government and even increased violence significantly since 2012 to date, where the Syrian government used weapons of mass destruction and aircraft and tanks to bomb Syrian cities that came out demanding change. 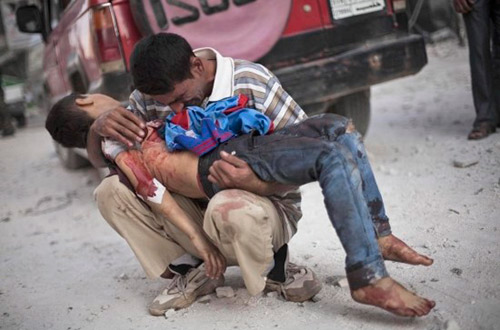 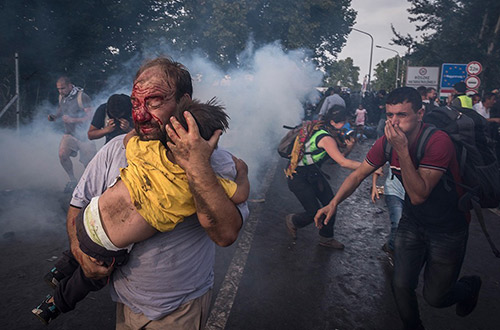 Come with us at HWPL to make a big cry with one voice to the countries of the world to intervene to stop the war in Syria and save millions of Syrians and return refugees to their cities, and secure a decent life for the Syrian people who suffered and suffer from a fierce war.