Skip to content
Previous
Next
Published On: January 28th, 2019

The Answer to Peace Protects both the Nation and the People: Article 4 of the DPCW

Is there a country that is free from border and territorial disputes?

A border is defined as the boundary line that separates one country from another, and in terms of international relations, there are set laws that proclaim one state must not violate the territorial integrity or political independence of another state in any manner that does not directly coincide with the purpose of the United Nations. However, such border violations, which slowly break down the relations between states, continue to raise tensions and spark conflicts between states even to this day.

There are many tense situations that foreshadow a looming crisis, and it is not limited to only a few states around the world. Currently, the heated border dispute between India and China continues to threaten the peace and safety of the region. In India, there are several border areas that are composed of sparsely populated mountains, forests and valleys which have not yet been completely demarcated so the borders are not clear. For this reason, some have speculated that members of the Chinese People’s Liberation Army secretly cross the border by disguising themselves as nomads and traveling from Demchok, which is east of Radak, to India. It is said that they then build tents and cross some 300 meters over the border along with their cattle.

Just like this, military, political, economic and other forms of border violations occur frequently within many states around the world. These acts of invading the established borders of neighboring states can create significant obstacles for securing and maintaining peace. Border disputes also directly affect the lives and well-being of the people in those conflicted regions, as well as lead to extensive political and military issues.

For the sake of peaceful international relations, HWPL has proposed the following solutions through Article 4 of the Declaration of Peace and Cessation of War (DPCW), which is, in total, composed of 10 articles and 38 clauses. 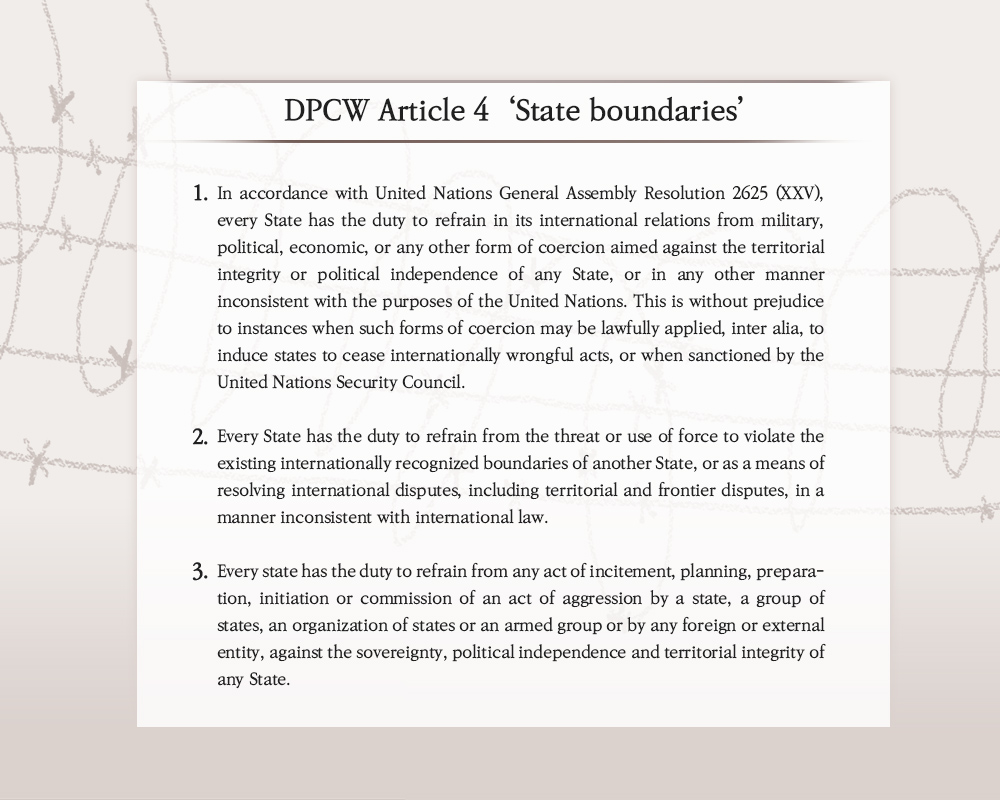 According to the 3 clauses of Article 4 – State Boundaries of the DPCW, all states, in their international relations, are obliged to refrain from military, political, economic, or any other form of coercion that infringes on the territorial integrity or political independence of another state in any way that is inconsistent with the purposes of the United Nations.

The core content of Article 4 of the DPCW is that states should refrain from any actions that may be considered as inciting, planning, preparing, initiating or commissioning acts of aggression against the sovereignty, political independence and territorial integrity of any other state.

According to Hong Kong’s South China Morning Post (SCMP) report, China, which is currently embroiled in a number of border disputes with neighboring countries, is now developing the world’s first electromagnetic ground rocket in preparation for conflicts sparked by the current border issues. Also, Syria has set up an advanced defense system on the Jordan-Syria border in the midst of its civil war. This defense system is set to attack any intruders according to the rules of engagement who ignore prior warnings should they violate established border regulations.

The result of this production of such weapons for the stated purpose of border protection is nothing more than a hinderance to peace that compromises the safety and prosperity of the states involved, regardless of their intended motives or purpose. Given this, it is important for states to recognize and acknowledge the fact that mobilizing forces and thus agitating both national and non-state entities is also antagonistic and only serves to further fuel the tensions. The resulting loss from using force to perpetrate acts of aggression and injustice are massive, and it is nearly impossible to fully fix the damage that was done and heal the wound that is left.

The provisions contained within Article 4 of the DPCW are for legalizing the foundation for building trust between nations which can also inspire peaceful compromise when issues do arise. In addition the 10 articles and 38 clauses of the DPCW are recognized as the quickest answer that will allow the current generation to achieve the realization of peace. Currently many heads of state and legal professionals are working to bring this declaration to the United Nations so it can be adopted as a legally binding instrument.

Today, heads of state all over the world have the duty to actively search for ways to end wars for the sake of their own people, as well as to contribute to world peace that can be left as a legacy for future generations. HWPL and the messengers of peace from around the world have a strong desire for the implementation of a law that would break down barriers of conflict and border issues for the safety and peace of all members of the global village and to protect the rights and sovereignty of neighboring states as soon as possible.