Skip to content
Previous
Next
Published On: September 29th, 2022

The Central Point of the institutionalization of religious peace: WARP Office

Hare Krishna, I am Mahendra Das the Temple President of ISKON Sri Sri Radha Madhava Mandir of the Philippines.

Our philosophy states that we are under one God and He is addressed by various names, so it is such an honor for me to be part of the WARP office and participate in dialogues with various religions to achieve peace and harmony.

The Religious Peace Academy is a comprehensive program and sustainable approach to deeper scripture-sharing that came out as a product of the WARP Office that facilitated the detailed presentation of the philosophy, practices, beliefs, and cultures which are based on the scriptures of the Muslim, Christianity, and the Hindu, specifically, the Hare Krishna Movement religions. Religious Peace Academy began during the height of the pandemic. Instead of slowing down, we doubled our efforts to contribute to peace in the field of religion.

That is why I became very enthusiastic when HWPL Philippines developed this forum to an educational program called Religious Peace Academy or RPA. This allowed the lecturers and audience to have more time to discuss about various scriptures. The RPA started last June 2021 until November 2021 and conducted it every Saturday for 3 hours, 1 hour each for Christianity, Islam, and Hinduism. It consists of 40 minutes of lecture by religious leaders, followed by a 20-minute Q&A session with the students.

We gained so much knowledge about other religions that we haven’t heard before. Moreover, it led us to launch the RPA 2 last March 12, of this year, and was completed on August 13, of 20 lessons from each of the 3 lecturers. Here, we are able to share about detailed practices and beliefs of each religion. Classes were made vibrant and lively by incorporating trivia about the religion, playing games, and showing videos for better awareness, understanding of the various lessons.

Aside from the Saturday lessons, we, the lecturers, met every Thursday for 1 hour and discussed the questions that came up during the previous class and understand more deeply the Quran, Bible and the Bhagavad Gita.

I remember vividly when we started planning that we were very excited to prepare for this Religious Peace Academy. Each lecturer believes that education is an important key to achieving peace. We wanted to reach many people to join this interfaith theology program. Our Muslim lecturer made an effort to post the banner of RPA on his personal SNS account to invite his family and friends. He also shared it on their group chat of the school where he teaches to invite his co-teachers to join the RPA. Likewise, I Invited and announced this program to our temple and congregational members.

It was participated by 30 students, who are Christian pastors, Hare Krishna devotees, and our Muslim brother and sisters on the first launching of the RPA. Through this effort, we operated the second RPA with 100 participants together with some graduating students of our university.

Through RPA, I found that the basic concepts of God, who is the cause of all causes, and the Creator of everything in all religions, are the same but different on how the details are explained. According to the Bhagavad Gita, the Supreme Godhead, who is omniscient, knows the past, present, and future, and who is also called omnipresent, present in everything, and everything happens due to His supreme will.

In the Bible, “I am the Alpha and the Omega,” says the Lord, who is, and who was, and who is to come, the Almighty. And the Quran states that everything Allah says will happen according to his will. As a result, there is only one God, who is known by many names, including Allah, Yahweh, Jehovah, Buddha, Elohim, Krishna, and many more.

I became convinced that we truly believe in the same one God, and that the ultimate goal of the human life is to get to know the Supreme Creator and learn how to love Him above all. Furthermore, I also realized that all bona fide religions should teach the highest goal of life, which is to know God and learn how to love Him. I was able to understand how God works. A trustworthy scripture must teach the truth. And it made my realization expand more and embrace my brothers and sisters of other religions.

The question of what will happen after death is one of the most interesting topics in RPA. The lecturers discussed them from the point of view of their own scriptures. And we saw that the concepts of heaven and hell are almost the same and how to attain them lies in the goodness and evil of each individual and the help of the mediator like the Lord Jesus Christ, and the prophets, and the spiritual masters.

In particular, most of the parts about salvation in other scriptures are recorded in parables. It made me very more interested in exploring the other scriptures and determining the commonalities and the intersections in them. This opportunity to such comparative knowledge of other scriptures allowed me to better interact, communicate, and bridge the gap between the members of other religions and our congregation, who enthusiastically attended weekly RPA meetings, listened attentively, and asked meaningful questions about the lessons presented. 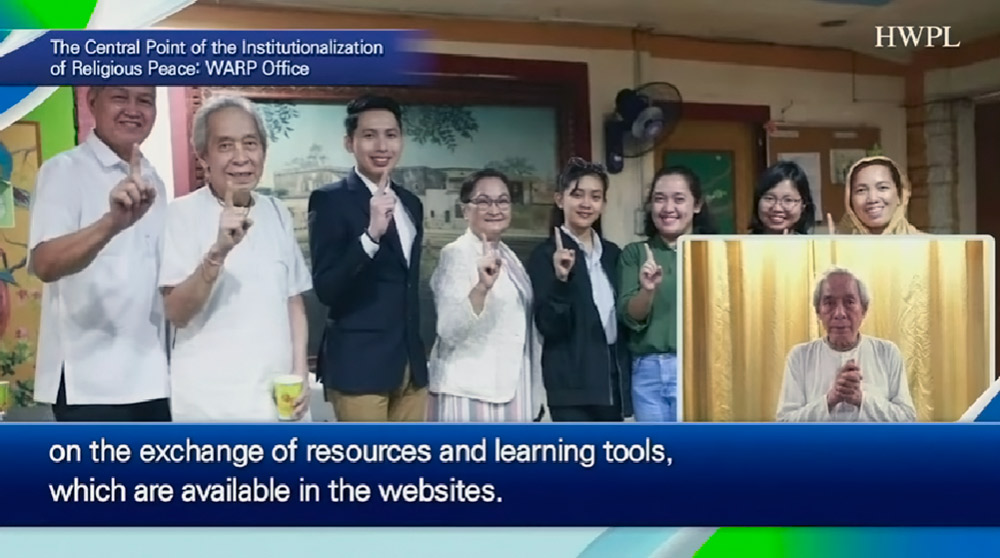 One of the most important results of the RPA program is the signing up of the MoU with other religions on the exchange of resources and learning tools, which are available in the websites. This will facilitate further exchange of understanding of the culture, beliefs, and practices of other religions. Moreover, our members of Hare Krishna Movement are now participating in various peace activities with HWPL such as youth camp and volunteer activities.

RPA aims to educate the religious leaders about the teachings of different scriptures to look for the truth, in which scripture clearly explains the will and plan of God according to what was written and how it came to be as a reality. RPA has institutionalized the approach in understanding God deeply according to the scripture. And RPA will soon become an educational institution that will educate the people about the truth of God in accordance to the scriptures.

I fervently pray for the continuous establishment of WARP offices in every city in the whole world. Hare Krishna Hare Krishna, Krishna Krishna Hare Hare, Hare Rama Hare Rama, Rama Rama Hare Hare. Glorifying the names of God is one of the easiest way of obtaining the love of God and peace among us.

We are one! Hare Krishna.