The fire of peace, which was ignited at the Peace Festival for the 2018 HWPL World Peace Summit: 4th Anniversary of the WARP Summit, was followed by a gathering of representatives of around 200 youth groups from 40 countries in cooperation with the International Peace Youth Group (IPYG) on September 19th. The heads of these youth organizations from each country that attended the session shared examples of the past year’s activities to support the Declaration of Peace and Cessation of War (DPCW) and discussed ways to expand and sustain future activities. 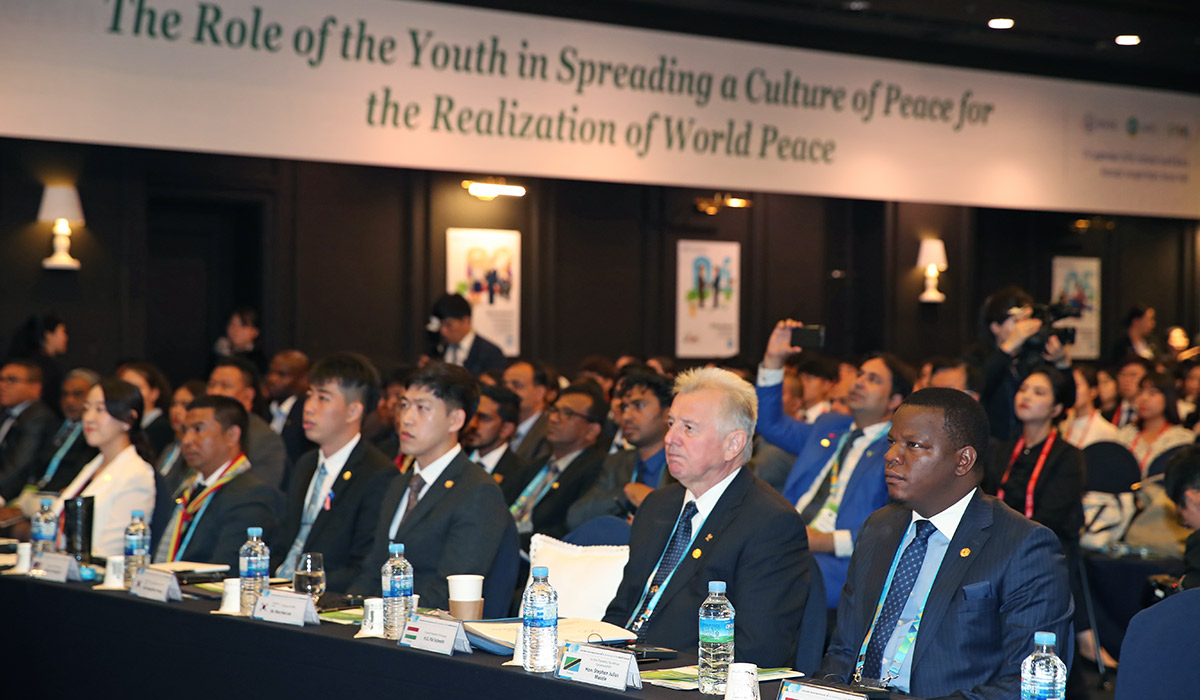 IPYG has been carrying out the “Legislate Peace” Campaign and the “Peace Letter” Campaign in order to bring an end to war in the global community by advocating for the DPCW. In addition, through the “Youth Sovereignty Workshop” efforts have been continued to spread a culture of peace among the youth all around the world.

The “Peace Letter” Campaign, which began in 2018 in South Korea to support the peaceful unification of the Korean Peninsula, has quickly spread around the world. So far, 851 youth groups from 110 countries have joined the campaign worldwide. Young people are currently writing handwritten letters and sending them to the leaders in disputed areas or countries to spread the message of world peace, delivering the core values contained in the DPCW. 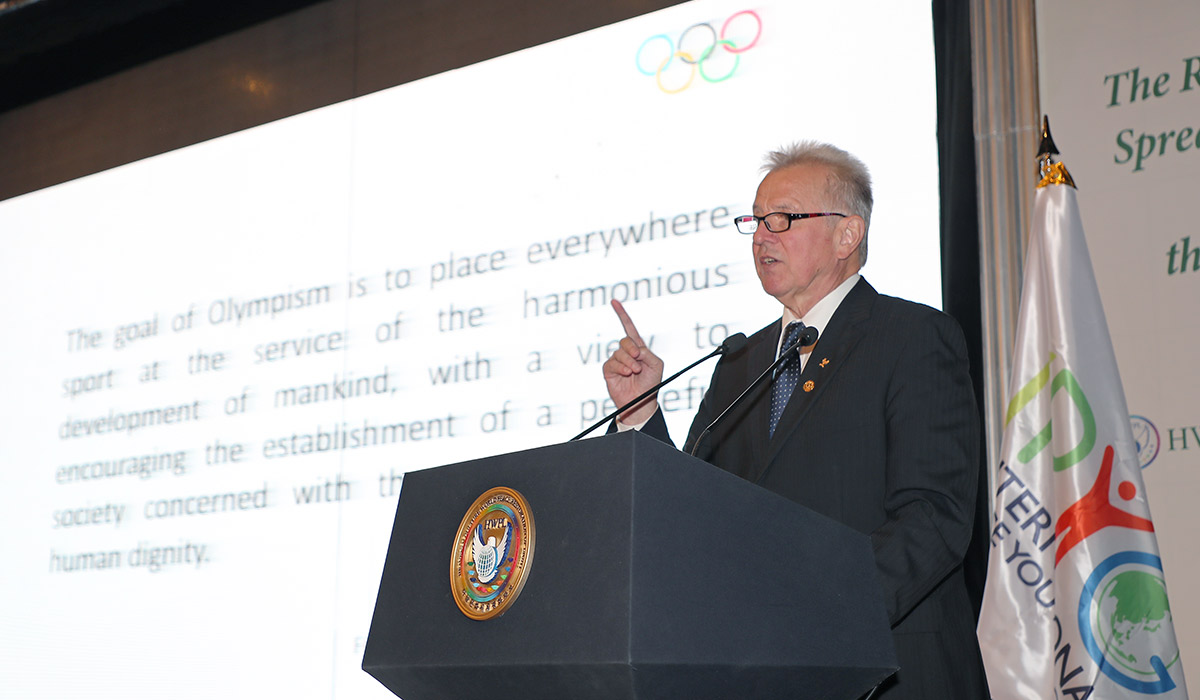 H.E. Páal Schmitt, Former President of Hungary, talked about the importance of the Olympic spirit as a member of the International Olympic Committee (IOC) himself. “The Olympic spirit has the goal of preserving human dignity and establishing a harmonious and peaceful society through sports. Although sports alone cannot maintain peace, the true answer to achieving peace is people.” He then continued, “If the youth take action to achieve peace, then it will be realized. Even peace on the Korean Peninsula can be achieved,” giving his congratulations and support for the activities of the youth group. 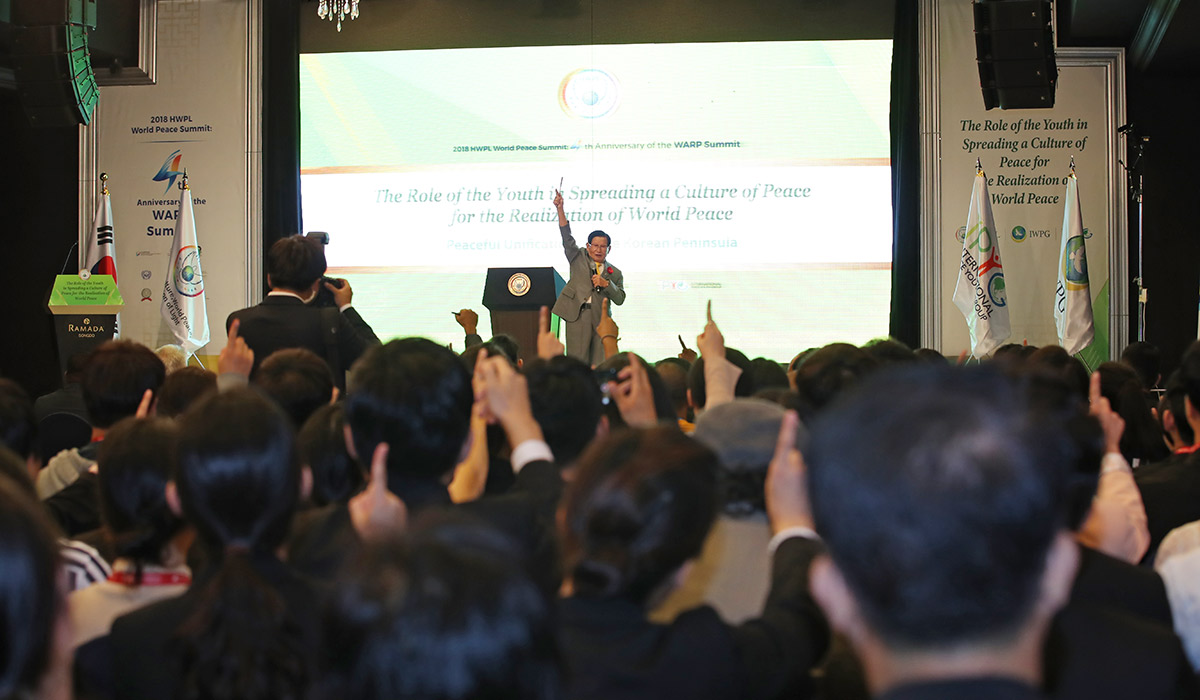 Chairman Lee, a Korean War veteran, shared his sorrowful experiences of war and encouraged the youth participants. “If I am to say the purpose of the foundation of HWPL, I would say it was founded for the youth of the world. I constantly think of the scenes during the war that took place a long time ago and I thought and still question are we really going to hand down this world that is oppressed and full of injustice to our future generations? No. We must create the world where there is no more tears and sighs. Who can do that job? It’s you, the youth who have the power and knowledge to protect yourselves by joining IPYG’s peace activities. I believe that all youth can become one together for peace. We are one!”

“Please listen to our voice for this country”
‘Peace Letter’: the voice of the youth sent to the representatives of each country

In particular, this session shared the success story of the ‘Peace Letter’ campaign, which has been actively conducted by IPYG in conjunction with the activities of spreading a culture of peace. 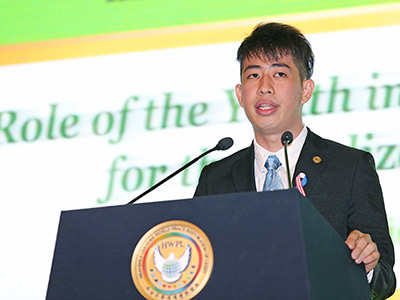 Ho Jun Young, Member of IPYG Malaysia said, “The meaning of peace is not the same to me as it is to you. It varies across each of us, as we grew up in different environments and social backgrounds. For example, in a country like Malaysia, we are blessed to not be involved in any of the weaponry-based wars, but we are constantly plagued with social conflicts that hinder racial harmony. To us, the citizens of Malaysia, “peace” is not about being “freed from war”, but to be “freed from racial conflicts” that impede the social harmony and development of the country. Hence, as youth, we need to fully understand what our country needs and start doing what is relevant.”

He also mentioned about the ‘role of the youth in the achievement of peace’ explaining, “In order to support the Declaration of Peace and Cessation of War, we will need to do what’s best for the youth in our country,” thus stressing the efforts that must be made until peace is achieved. After sharing about the case of the peace letter that was given to Tun Dr Mahathir Mohamad, Prime Minister of Malaysia, and his subsequent acknowledgement of such, it was stated that “Receiving the current Prime Minister’s endorsement on the peace letter signifies a big first step taken towards peace in this country”. 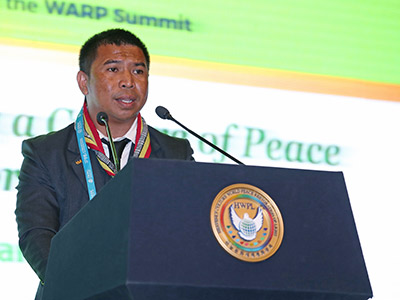 Mr. Herculano Amaral, Director of Eduction and Youth in Dili Rotary Club of Timor-Leste, described the difficulties and obstacles facing her country that is currently in the midst of conflict. He began by saying “Let me tell you how we’ve been experiencing obstacles and the difficulties that we are facing.”

He then explained, “Each one of us has a dream to live in a peaceful country, with harmony and prosperous lives. In Timor-Leste we have a range of youth movements involving young men and women to help our country in order to secure and create opportunities for creating long lasting peace. We have run regular peace education and seminars and peace walks where we mobilized hundreds and thousands of young people to demonstrate our willingness and our dream to just live in peace. IPYG has been playing a very important role in advocating the Declaration of Peace and Cessation of War (DPCW)….the 10 million signature campaign and the peace letters.” 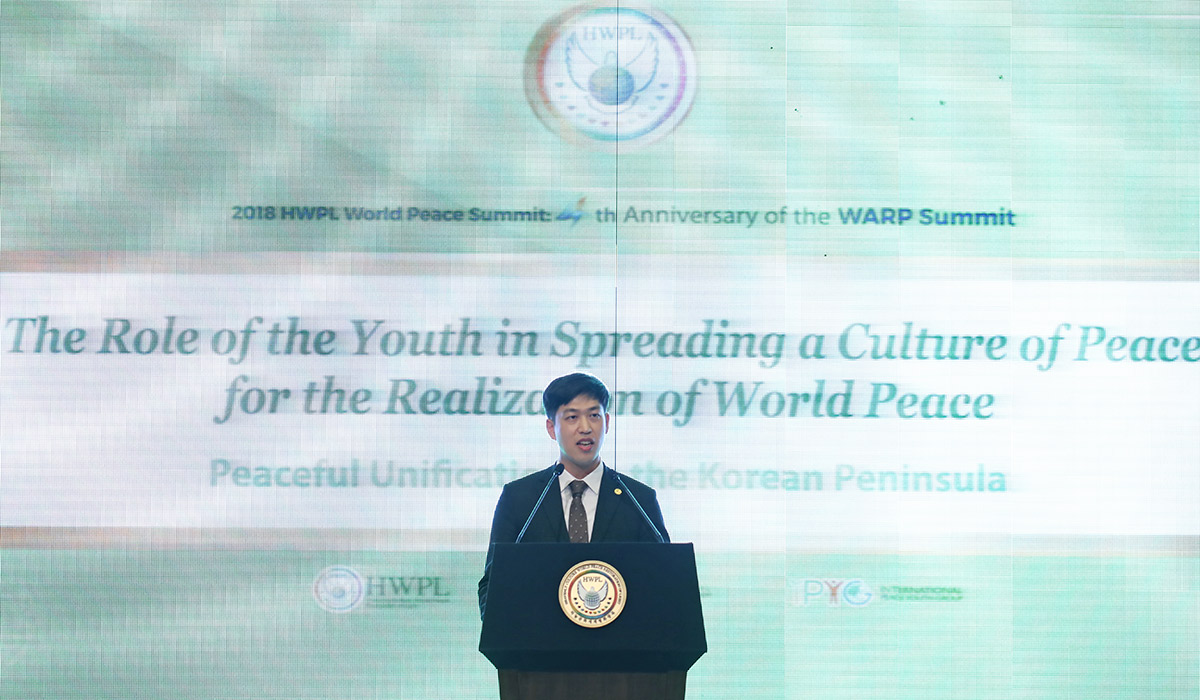 Lastly, Youngmin Chung, General Director of IPYG, said “Today, we reaffirmed our confidence of the direction we must take through the evidence in the progress of our work. Now, what is left for us to do? I would like to emphasize this year, the importance of “taking action”. I know that all of you here took part in sending peace letters to support the DPCW. As a result, the letters have been delivered to many heads of state around the world. This is a great deal, but it doesn’t guarantee that the current presidents will immediately sign the document.

He added, “From this day, we need to develop an achievable plan to progress our work, and act on the plans we build. We can approach our goals by utilizing the media, petitioning the government, and continuously campaigning to raise awareness of our work. And I would like you to come up with even greater ideas, as you know best the conditions of your country. Please think about it, develop it, talk with IPYG, and let’s execute it together.” 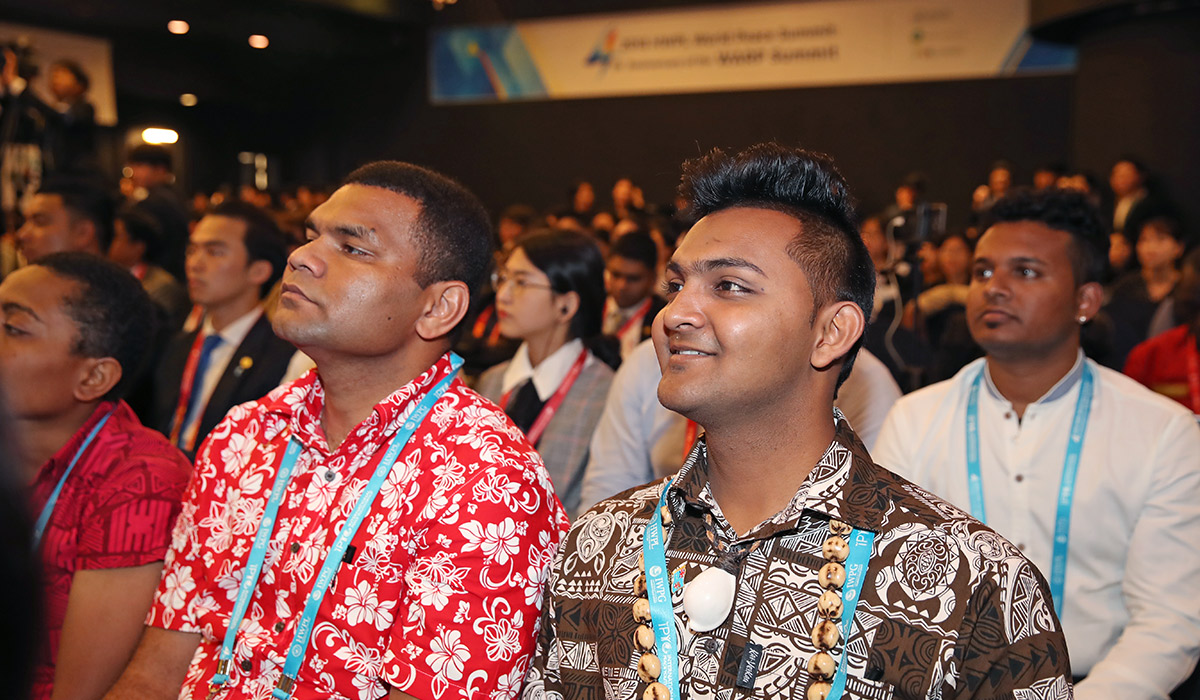 Following this, the youth performed a musical performance under the theme of ‘World Peace Made from Peace Letters.’ Just as the singing voice of these young people proclaimed, “Rather than a stabbing knife, I lift a stirring pen of peace,” it suggests a new direction to advance the peace activities of the youth in this era. IPYG will continue to bring passion to the Korean Peninsula and the world for peace. 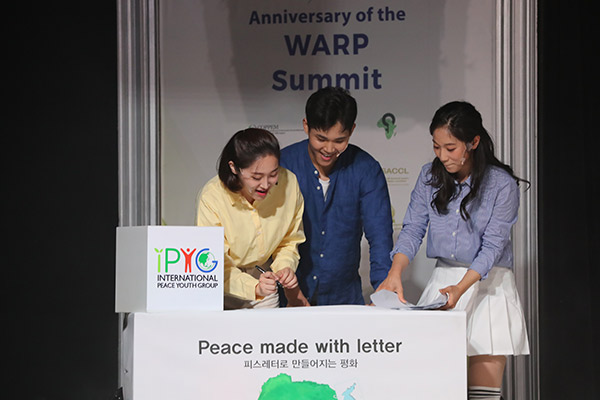 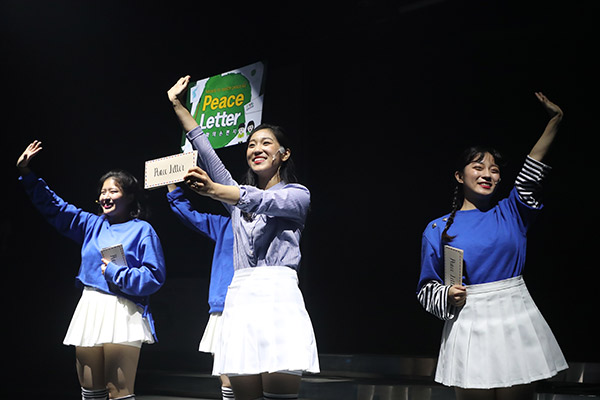 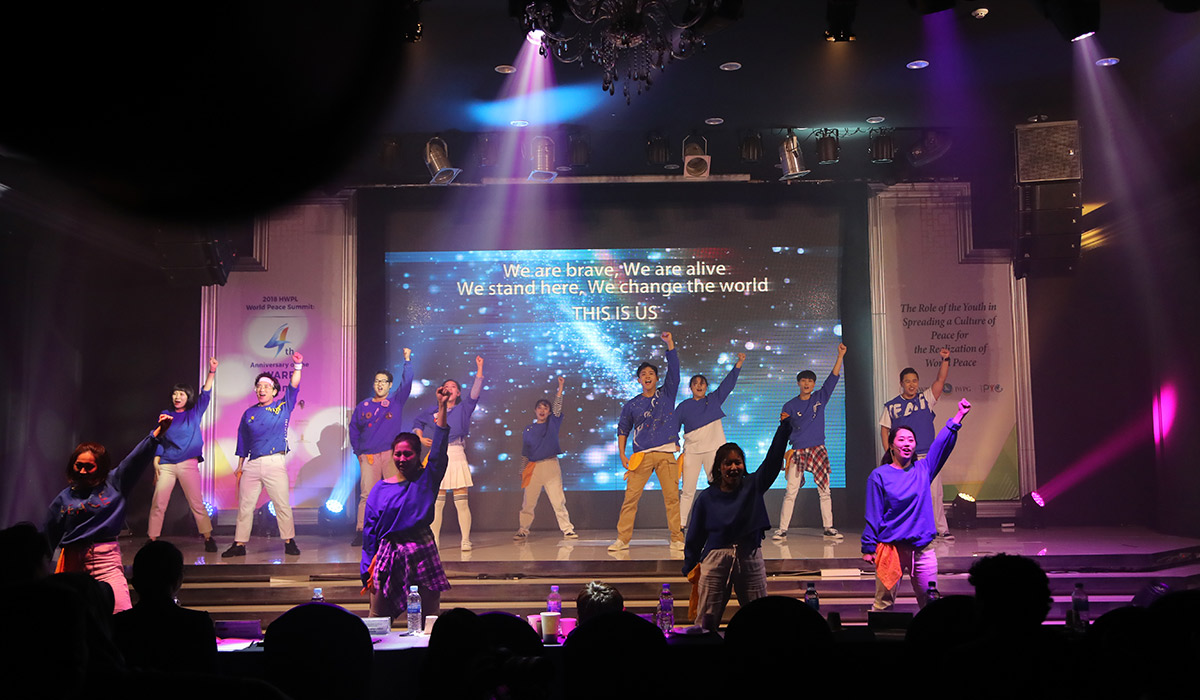