Leadership of World Peace, the Responsibility and Role of HWPL Peace Advisory Council

The HWPL Peace Advisory Council attended the 2018 HWPL World Peace Summit: 4th Anniversary of the WARP Summit and took time to discuss ways to resolve conflicts and create practical action plans based on the principles of the Declaration of Peace and Cessation of War (DPCW) to work together to achieve peace around the world. The HWPL Peace Advisory Council is comprised of experts in various fields from all around the world, including former and current presidents and heads of state, legal experts, civil society organization leaders, education experts and religious leaders. 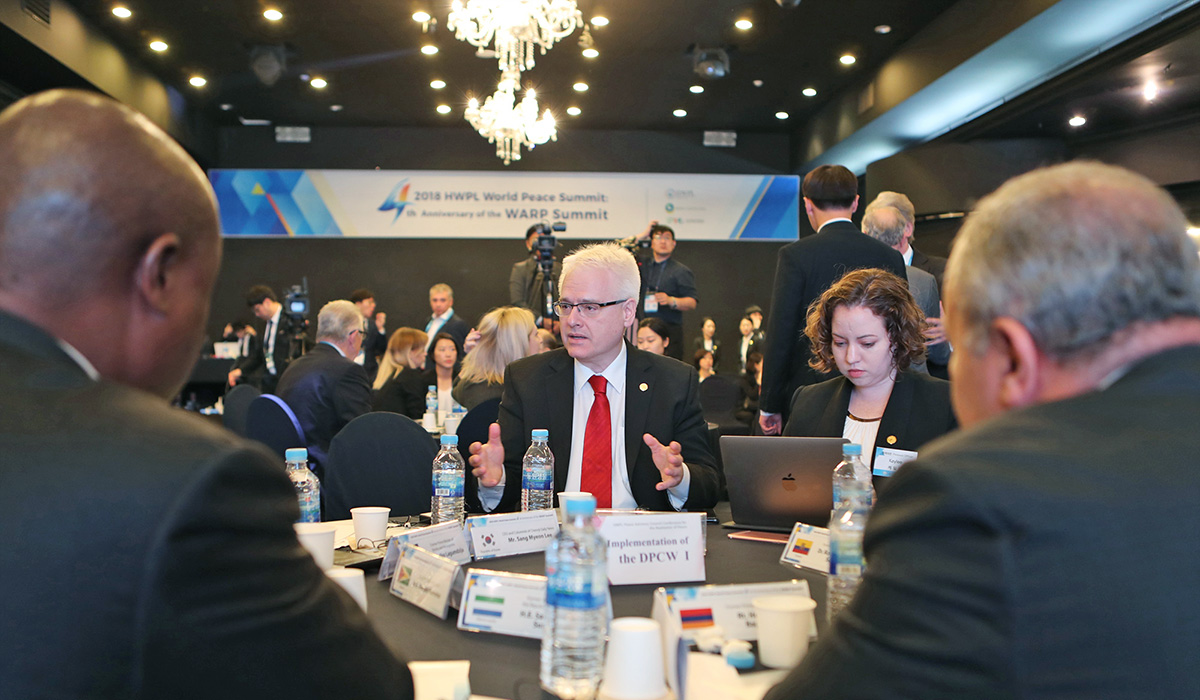 The conference was attended by 179 members of the HWPL Peace Advisory Committee, including 25 former and current presidents and 50 experts from various fields, and introduced various activities and methods to promote the DPCW. In addition, through the subcommittee meetings, the specific role of the Peace Advisory Committee was discussed in regards to the presentation of various directions for the peaceful reunification of the Korean Peninsula, as well as the establishment of sustainable peace. 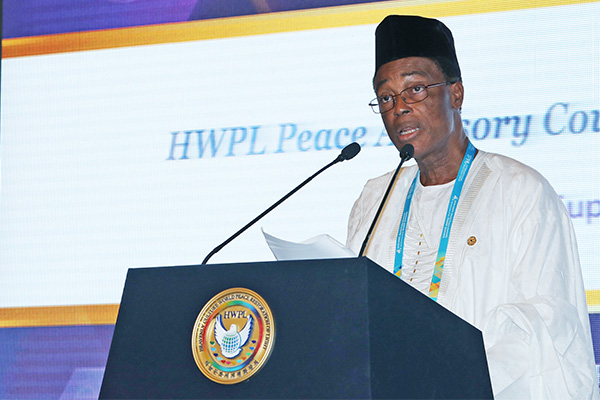 The meeting began with a presentation from H.E. Amb. Martin Ihoeghian Uhomoibhi, Former President of The UN Human Rights Council in Nigeria, who has been constantly working for peace in both Nigeria and Africa. He stated, “I am delighted to state unequivocally that my approach of establishing a conversation across board with all stakeholders worked and worked well.
If we are to stand a chance of achieving Chairman Lee’s noble projection of totally eradicating wars from our world and comprehensively entrenching global peace, we must develop, consolidate and consistently exhibit a culture of peace conversation; we must bring all stakeholders to the dialogue table. We are not in the least wishing for a world without misunderstandings; that would be too idealistic. But in all our misunderstandings and disagreement, we should let conversation and dialogue do the work of healing.” 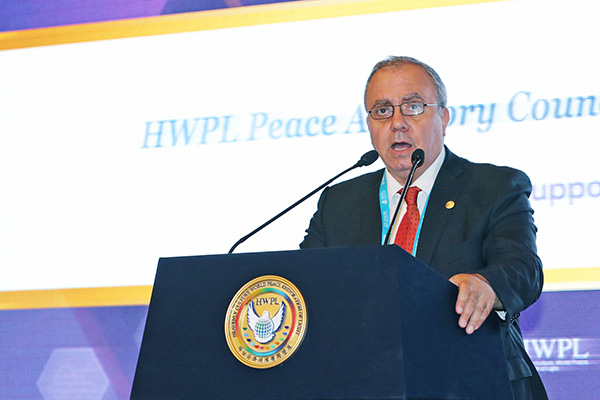 Also, concerning the realization of peace, Rt. Hon. Hrant Bagratyan, Former Prime Minister of Armenia, shared cases where he performed strategically to make the DPCW legalize in his country as a HWPL Peace Advisory Council member. He stated, “First, I introduced DPCW to the nation for it will be soon complied by us. The reason that I could do this was not only because this declaration and HWPL’s peace work is beneficial to a specific level of society but is a definite tool to bring peace to all of us. As a result of that, head of parties showed their support on this declaration and agreed to introduce DPCW to the members of the parliaments and NGOs.

Second, I also hosted advocacy forum inviting all levels of society. Transcending social position, gender and professionals, people raised their voice for urging what is necessary at our time, advocating the value of the Declaration.

Third, we have organized meetings with representatives of society, NGO and press. Then, we had a small conference with the parliamentary fractions. At the end, we were able to visit government employees both in Armenia and Nagorno-Karabakh. During these meetings, we have explained the aim of the HWPL Peace Advisory Council’s activities, presenting main principles and juridical sense of DPCW. We went over the 10 articles one by one explaining the importance of each.” He shared these three cases and added, “the holding of this seminar to stress the importance of partnership amongst us, the leaders, is indeed most timely as we are the one who makes decision,” calling for the need for the roles and efforts of the council members.

“Peace cannot prevail anywhere
if it does not start at the individual level.
All our efforts must be invested in
creating peace of mind in all mankind.
A mind at peace with itself is a purveyor of peace to others.” 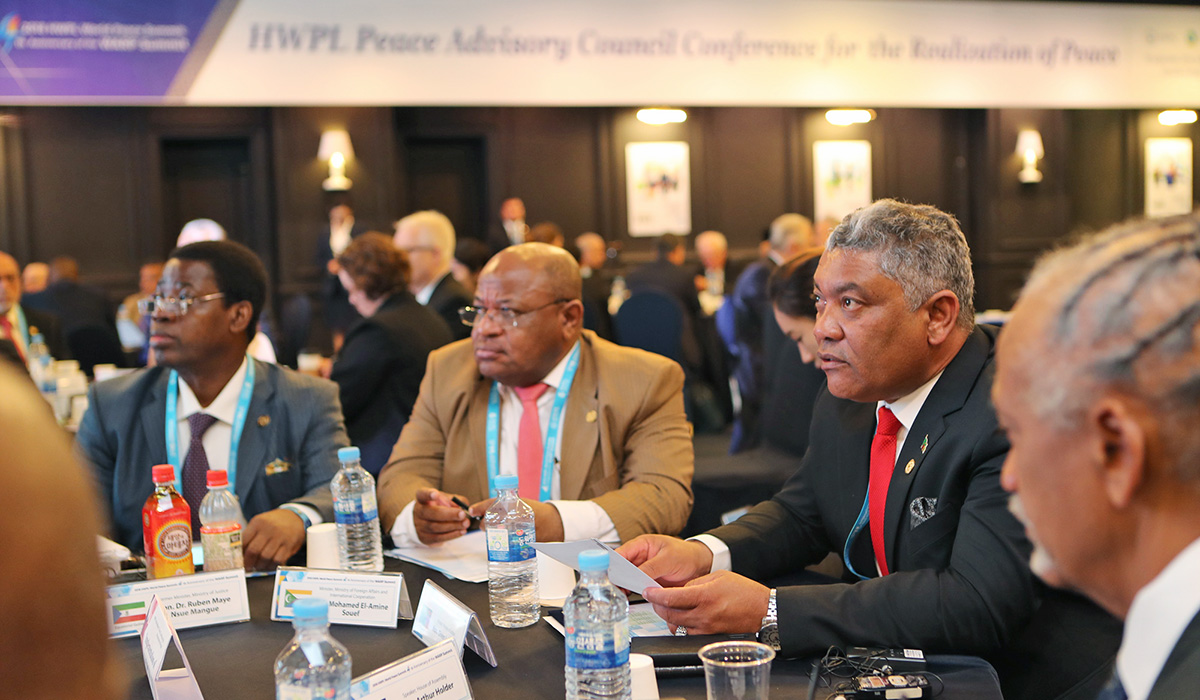 In addition, Hon. Given Lubinda, Minister of the Ministry of Justice in Zambia, who has been working diligently for the legalization of the DPCW in Zambia through activities allowing the government and civil society to become one, urged HWPL to continue to foster the extension and expansion of peace building activities.

He also said, “I urge members of the advisory council to extend and deepen the activities of the International Peace Youth Group (IPYG) and the International Women’s Peace Group (IWPG) in all countries. The Advisory Council must provide a platform through which youths and women can bring their numbers together to demand of their leaders transparent and representative leadership devoid of the vices of corruption and self-aggrandizement. The numerical advantage of the youths and the power of persuasion of the women must be harnessed to demand that all governments in the world and eventually the United Nations adopt the declaration of peace and the cessation of war.” 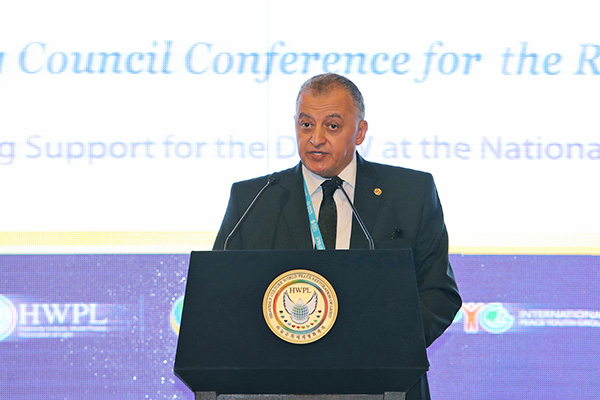 Following this, Hon. Dr. Adel Omar Sherif, Deputy Chief Justice of the Supreme Constitutional Court of Egypt, presented the value of the DPCW. He stated, “Every article of this resolution, right from prohibition of the threat or use of force, or settlement of disputes through peaceful arbitration, or freedom of religion, or spreading a culture of peace, all these issues are the factors that can create rifts, if not handled sensitively. At the same time, when a systematic approach is accepted globally towards these issues, a lot can be achieved.”

He lastly presented the need to prepare ways for cooperation to expand the DPCW: “We should work together to raise the awareness of peace in our societies as a primary step to get national governments more interested in advocating and adopting draft international instruments as the one drafted by HWPL.”

The second part of the conference involved specific subcommittee meetings focusing on the establishment of an international law for peace, the promotion of a culture of peace within religions and the peaceful reunification of the Korean Peninsula.

1. Implementation of the DPCW

2. Promotion of a Culture of Peace within Religions

3. Peaceful Reunification of the Korean Peninsula

As a result of the discussions regarding the various agendas of each subcommittee, all members of the HWPL Peace Advisory Committee promised to establish a specific strategy for the implementation of the DPCW to achieve sustainable peace through the formation of a close network that would consistently communicate and hold regular meetings. 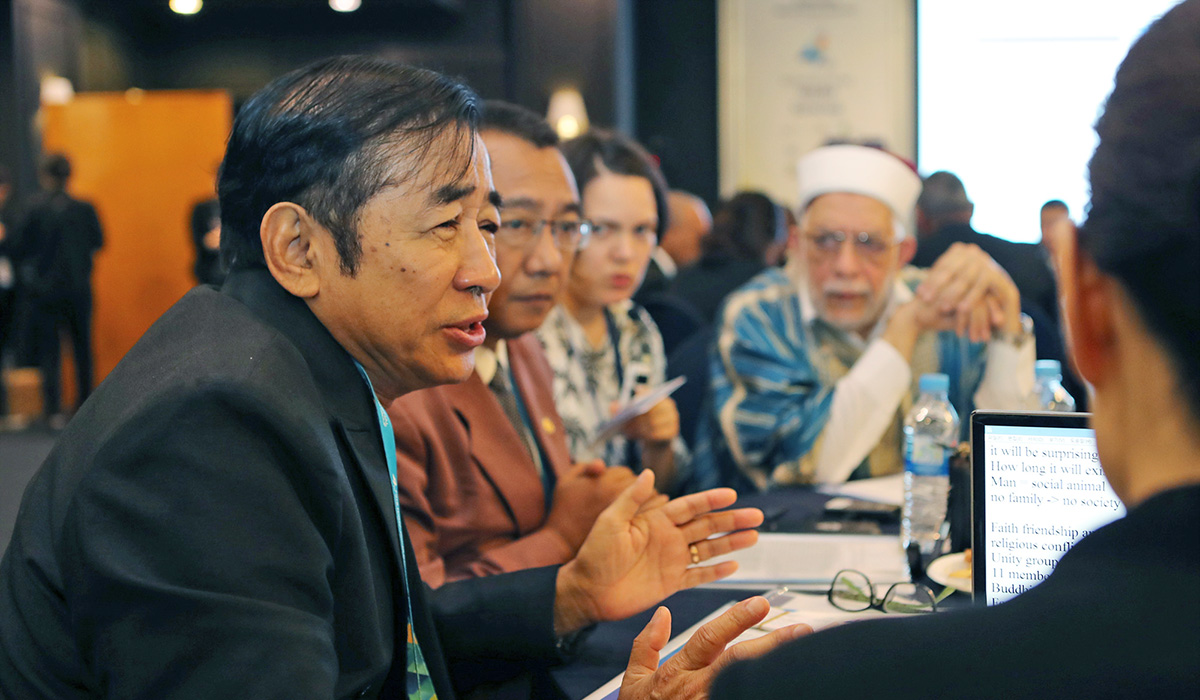 In order to fully achieve the principles of religious freedom and religious and ethnic identity and peace as described in Articles 8 and 9 of the DPCW, religious leaders made a commitment to take the initiative and first eliminate conflicts among religions and introduce the HWPL WARP Offices within each country.

This year, North and South Korea declared a joint goal for the realization of a nuclear-free Korean peninsula through complete denuclearization, which would put an end to the long-standing division between them that resulted from the time of the Cold War. The government is making efforts to bring peace to the Korean Peninsula, so at the same time civilian efforts must also be made.

For this reason, the Ministry of Peace and Unification agreed that it is necessary to establish a strategy for the formation of a positive public opinion regarding the peaceful unification of the Korean Peninsula through cooperation with the UN NGO as well as play a leading role in this unification as a private organization.

Finally, the HWPL Peace Advisory Council took the time to once again commit itself towards putting in its utmost effort to carry out in full its responsibility and role within each country for the establishment of sustainable world peace based on the discussions held throughout this time.